We are all made of stars: a Moroccan artist’s search for a familiar symbol in the US

Part 1, from the Civil Rights Museum in Memphis to the Mississippi cotton fields

I came to America for a project, Out Among The Stars… from New York to Los Angeles, with the photographer Marwen Farhat and the Culturunners crew.

For the past year, I have been looking at the subject of the five-point star, a symbol of strong spiritual and ideological significance in both the Moroccan and American flags and culture. While on the road, I documented the stars I found and interviewed local people associated with them. I wanted to understand what the star meant to them, and act as a bridge between cultures.

Driving from NYC to Pennsylvania, 12 January 2017

When leaving the studio in New York, we faced our first challenge: how to put all our luggage into one cab? We were three people and 12 pieces of gear. We knew that half of it would not be used, but humans have a way of burdening themselves with more things than they could ever need, and we are no exception. 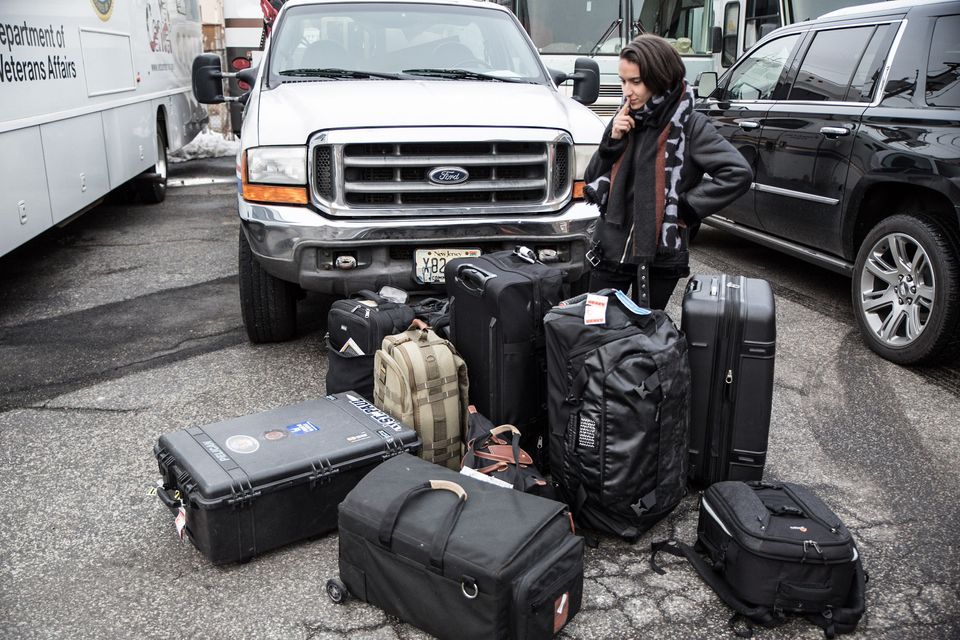 Think of it as a giant game of Tetris (Photo: Marwen Farhat)

Once we arrived in New Jersey and saw the RV, it was like reuniting with an old friend. We were eager to start this new journey: we didn’t know what would happen, who we would meet, we couldn’t even imagine how it would go, but we were very excited. John drove, Marwen and I acted as co-pilots—and down poured the rain. We drove for four hours, finally stopping in the middle of the night at this first motel we saw—just like in all those road trip movies.

The next day we kept driving until we reached Memphis. We parked near Graceland, Elvis Presley’s home. It was full of crazy RVs with names like Patriot Thunder.

It’s not easy to interview people from a completely different culture in a foreign country. But that's what we set out to do from our first day. Marwen followed me with the camera and I would ask the questions. I felt the city’s intense history and heritage during our tour of Memphis, which included the Martin Luther King Church, the Stax Museum of American Soul Music, and finally the National Civil Rights Museum. 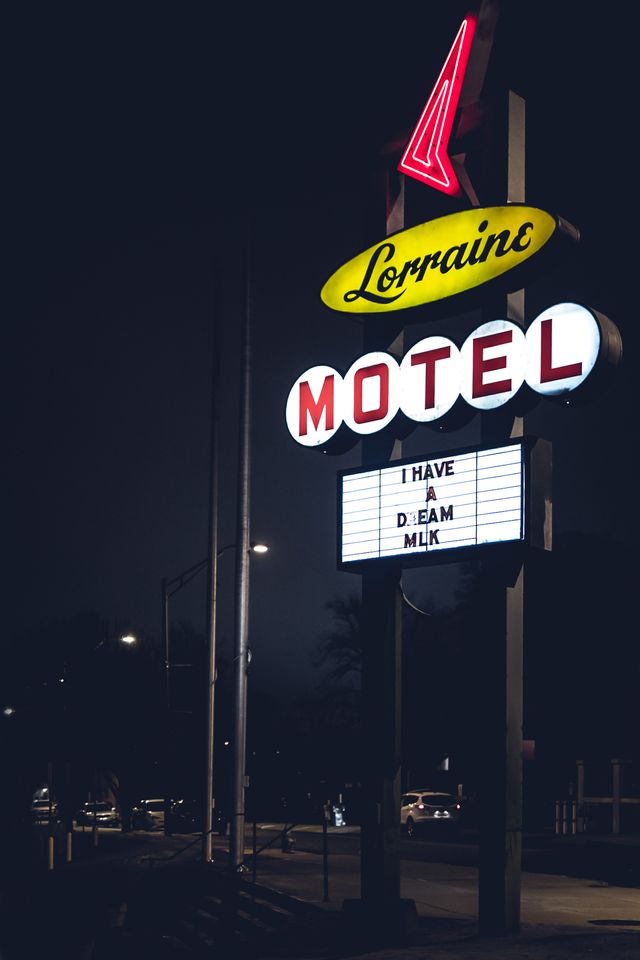 The Lorraine Motel, where Martin Luther King Jr was shot and killed in 1968, is now the home of the National Civil Rights Museum (Photo: Marwen Farhat)

I began asking people about the star and what it meant to them and the responses were incredible. People in Memphis related it to the Civil Rights Movement; to them, the star is the symbol of their ancestors’ fight for their rights, it’s the symbol of belonging to the US just like anyone else.

One of the people we met was the grandson of the photojournalist Ernest Withers, who inherited his archive of more than one million photos from the Civil Rights era. Looking at those images was like jumping into another time.

It was all very emotional. We were in the shadows of people who had changed history. This place is deeply connected to the fight for human rights on a global scale. In today’s world, who still engages is these kinds of battles?

Along the Mississippi River, Arkansas/Mississippi, 16 January 2017

We drove through a town called Helena, Mississippi, and we continued to meet amazing people and talk about the symbolism of the star, nationalism and the future. I began to understand the deeper purpose of my project, which is to create a window reflecting the current-day state of our complex and diverse societies worldwide.

I have to admit that the landscapes in Mississippi and Louisiana are so familiar to me—it’s the same typology as the Arab countryside. The people are farmers, living a very simple, modest and traditional life; the neighbourhoods are very poor. I was surprised to see so much poverty in the US. 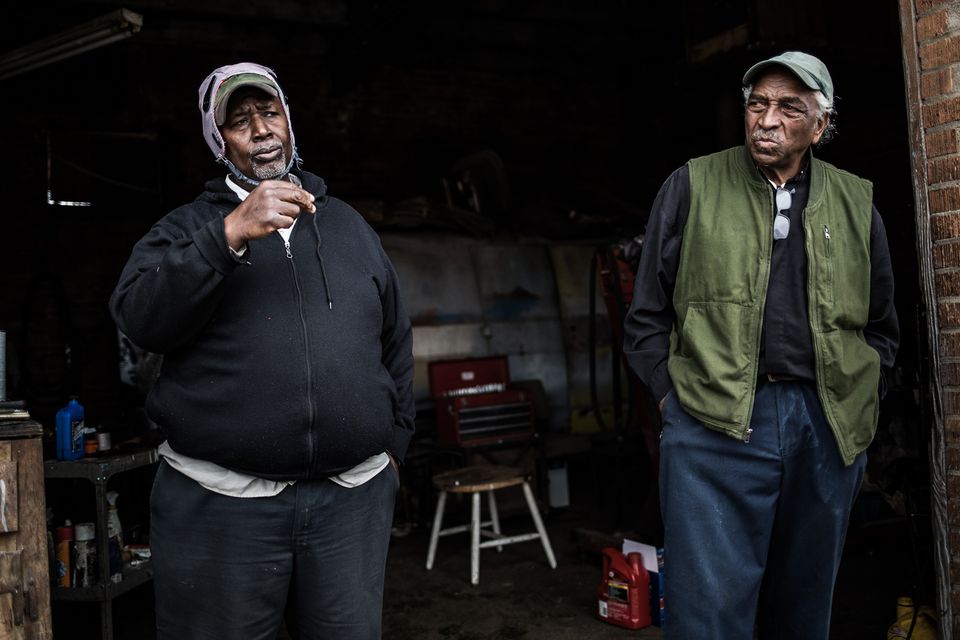 The conversations I had with people in the South were about the basic concerns in their lives: could their children have a good future, would they be able to feed their kids and provide them with a proper education, could they find a reasonably paying job and be proud of their accomplishments? Their views were very familiar. In the work I’ve done in Morocco, I collaborate with people who face similar challenges in their daily lives, and we use art and culture as a conduit for development. I never imagined that I would meet the same kinds of people with the same issues in the US—but I did, and on both sides of the world, the people have the same concerns, hopes and dreams.

We then drove through a cotton field in Mississippi. The only time I had seen this kind of landscape was in my school history books or American movies like Selma (2015), 12 Years of Slave (2013) or The Color Purple (1985). It was a weird feeling. As a foreigner, I was only aware of these scenes in an intangible way; now they were real.

We stopped by a gas station that was surrounded on all sides by cotton fields. There was a big star on the door and no one around, except those working the land. We were able to speak with the owner of the cotton farm and it turned out to be a very interesting and layered conversation. I understood very quickly that I was faced with someone who was, culturally, very different from me. He had inherited the land from ancestors who had fought in the Civil War on the Confederate side. So this land and the loaded history that comes with it, is part of his history and his identity. Can I judge him for that? Of course not. We don’t choose where and when we are born.

We shared some values, though, and it was ultimately good for each of us to meet someone so different from ourselves. I would have never imagined meeting the landowner of a cotton field and understanding his modern-day perspective. The same goes for him, how many Arabs or Muslims does he meet on a regular basis?

Up next: a trip to the shooting range, a meeting with a local sheriff, a night in an observatory, and listening to President Trump's inauguration speech while in Texas…