For his sixth stint as the curator of Art Basel’s Unlimited sector, the New York-based curator Gianni Jetzer has made use of the full width of Hall 1, creating longer sightlines and an elegant promenade around the section’s more than 70 large-scale installations, sculptures and videos. The reconfiguration gives Chris Burden’s Ode to Santos-Dumont (2015) space to fly during Art Basel. The late US artist’s lighter-than-air kinetic sculpture, inspired by the pioneering Brazilian aviator’s airship, makes short but mesmerising flights during the fair, courtesy of its ground crew and Gagosian Gallery. Jetzer, who is curator-at-large at the Hirshhorn Museum and Sculpture Garden in Washington, DC, gave us a whistle-stop tour of the section, picking a few highlights among many. 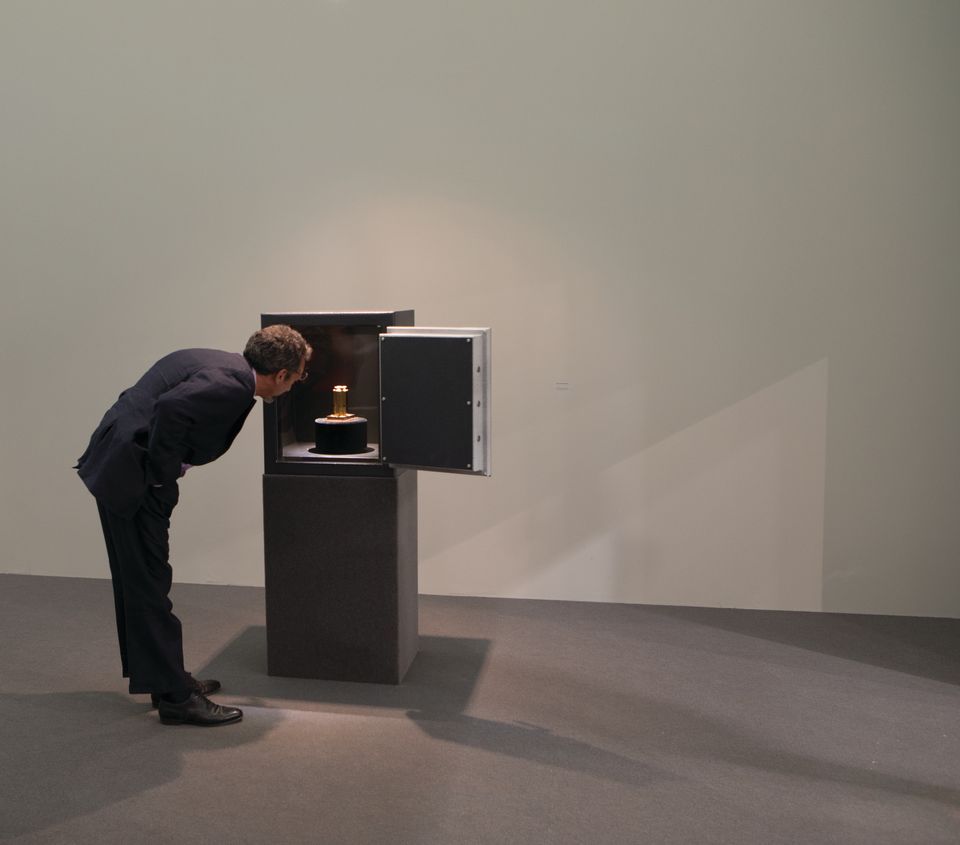 The Havana- and Madrid-based artist Carlos Garaicoa’s work was one of the last to arrive and is the most precious in Unlimited. Six dinky versions of landmark bank buildings, including Berlin’s Bundesbank and the Banco de España in Madrid—symbols of capitalist (in)stability, depending on the country and the global economy—are placed on rotating stands within safes that double up as open showcases. “He has cast the bank buildings in gold,” Jetzer says. “These precise miniatures are turned into museum items to be displayed. They are on display almost as a currency that is at risk of being stolen or eradicated.” 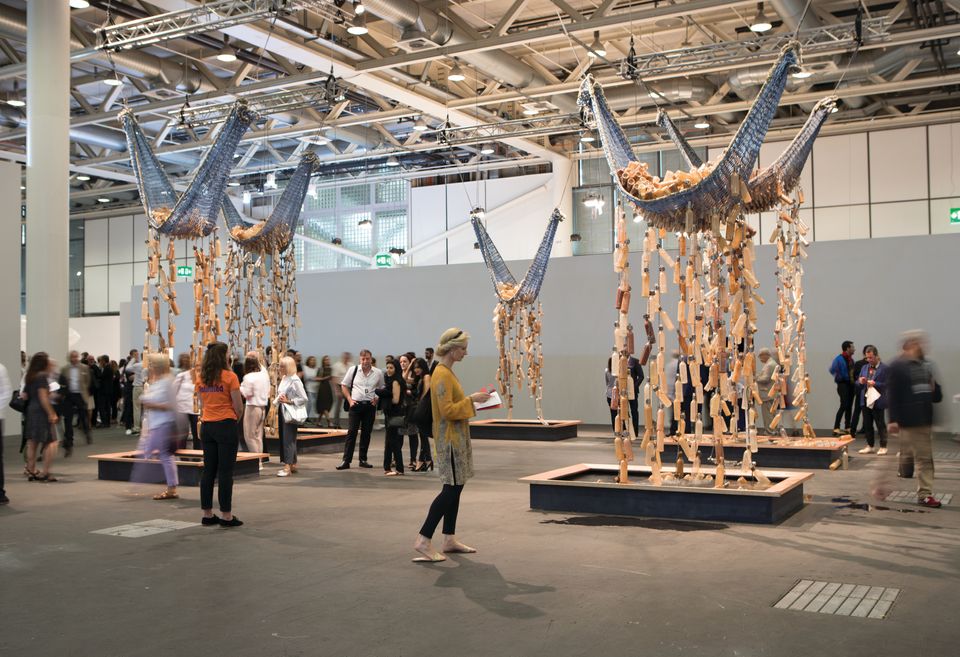 Williamson, who lives and works in Cape Town, South Africa, has delved into the Trans-Atlantic Slave Trade Database to create her large-scale installation, which features chained glass bottles hanging from nets above pools of running water. Each pool relates to a ship that transported human cargo. The artist has recorded the names of the ship owners and, most importantly, some of the millions of individuals who were enslaved. “Each bottle is inscribed with the name of a slave—their African name, Christian name, country of birth and size,” Jetzer says. 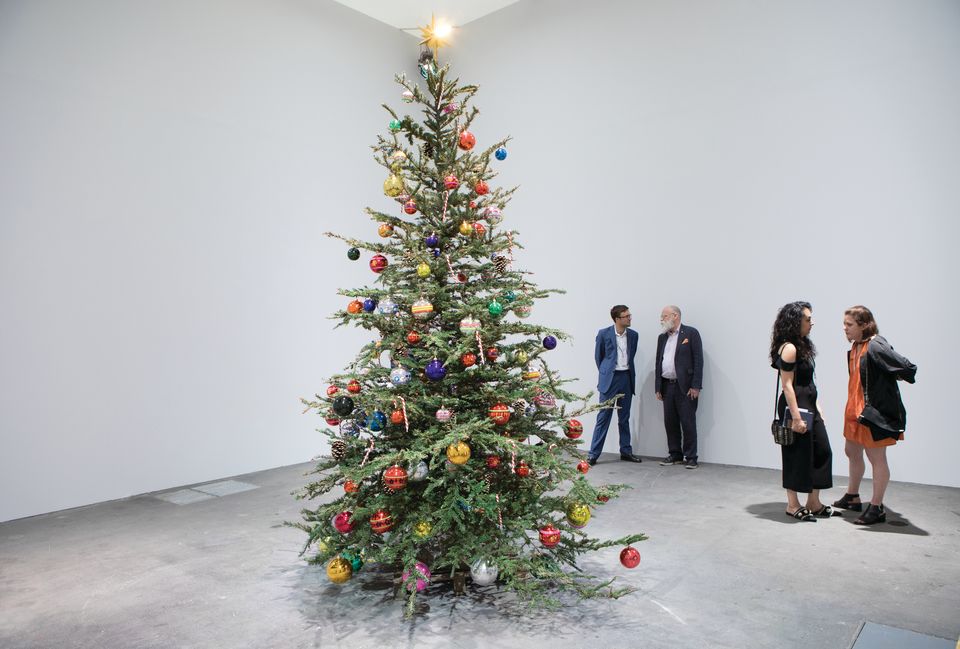 Philippe Parreno Fraught Times: For Eleven Months of the Year it’s an Artwork and in December it’s Christmas (July) (2017)

The French artist Philippe Parreno has made a unique and uncanny Christmas tree. Part of a series, this piece is the largest and its decorations are completely different from those of other “months”. Jetzer explains: “It’s made of stainless steel. Everything is painted. It’s a Christmas tree that never ages—a cut tree that has eternal life. It becomes a real Christmas tree every December, otherwise it is art. [Parreno] did 11 in total—one for every month except December. This is the July version. It plays with the symbolism of the Christmas tree—a pagan symbol that turned into a global success.” 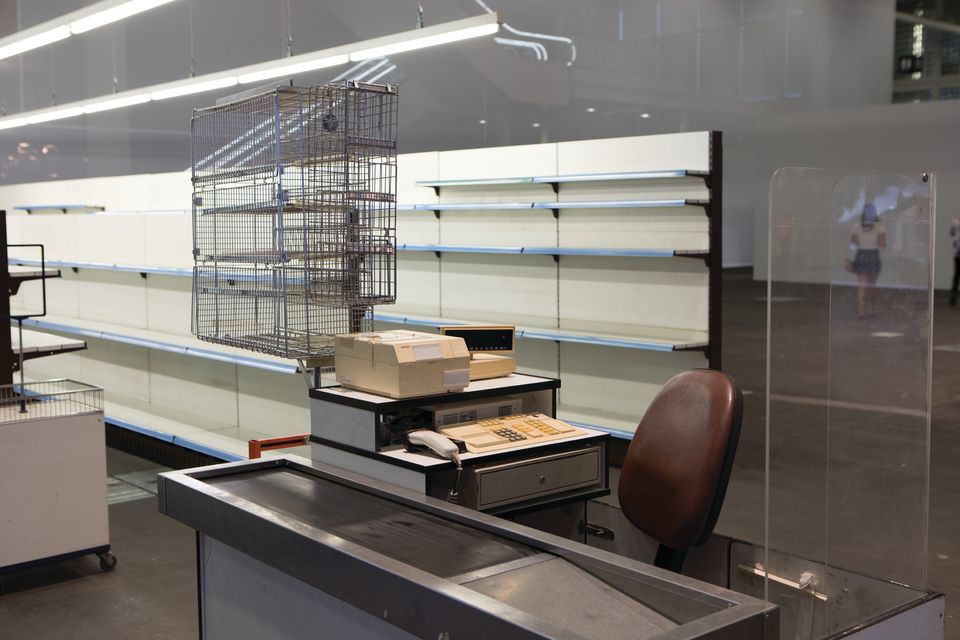 Schlecker, the well-known chain of German drugstores, closed down in 2012. Staff lost their jobs, doors were locked, lights were turned off and shelves were left stripped bare of cosmetics and household and healthcare products. The drugstore giant had 14,000 branches and 50,000 employees. This restaging by the artist duo FORT “gains new meaning within a commercial exhibition such as Unlimited”, Jetzer says. He explains that “Leck” means “leak” in German. “It is a leak in the sense that, in most cases, bankruptcy leaves no material trace; shops disappear, jobs are lost, nothing is left. The work of art by FORT can therefore be read as an acrimonious monument to economical failure.” He adds that the Berlin-based artists, Alberta Niemann and Jenny Kropp, intend to get the checkout belt working. 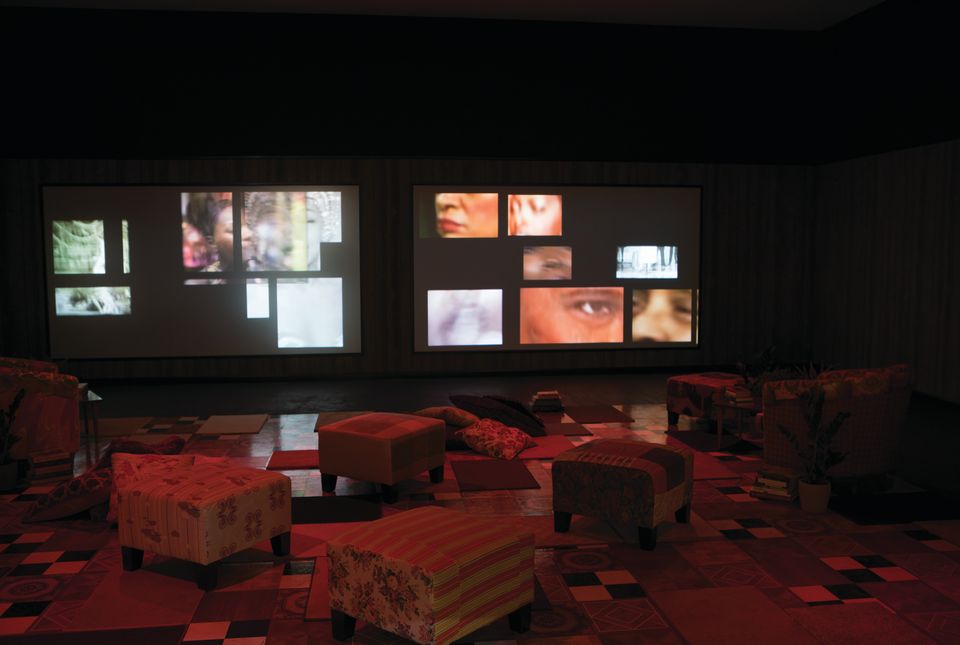 Mickalene Thomas Do I Look Like a Lady? (Comedians and Singers) (2016)

The US artist’s video features a high-tempo, off-the-wall collage of black female stars of stage and screen presented in an installation that invites visitors to come inside, take a seat and browse reading materials on feminism and African-American culture. “It is almost an opera of Afro-American women in entertainment, in all different roles: Josephine Baker, Whitney Houston, lesser-known comedians—all very strong women who are in charge. There are stereotypes of women and their contrary. I really like the lush salon, where it almost seems that it’s 100 degrees Fahrenheit,” Jetzer says. 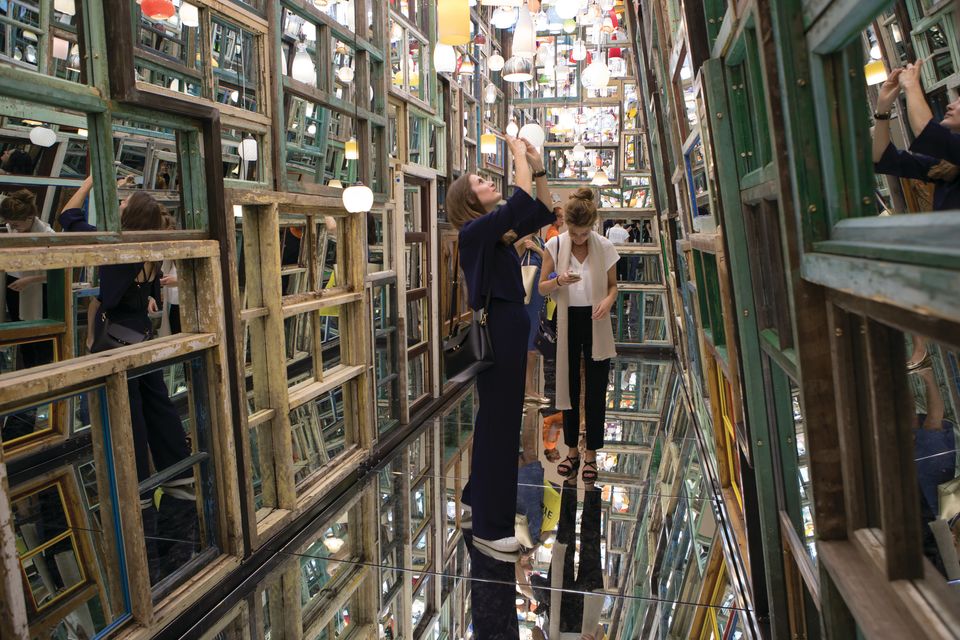 The Chinese artist Song Dong’s 15ft-tall, 29ft-long structure is made of fragments of the former homes of people who used to live in Beijing’s historic hutong neighbourhoods. “He salvaged window frames from houses in China that were demolished by large-scale projects. He is preserving their material as memory from the past and giving them eternal life through art,” Jetzer says. Inside are mirrored walls, floors and many lamps. “It’s like an Infinity Room,” Jetzer says, but one that is quite unlike Yayoi Kusama’s signature works.