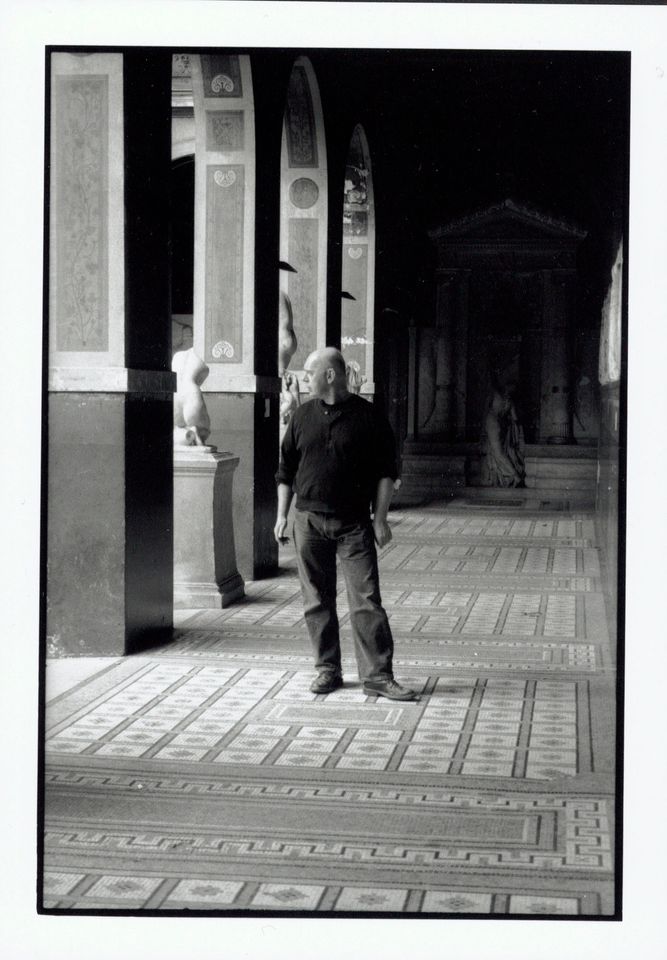 The artist and Royal Academician Richard Deacon has redisplayed the sculpture ledge on the top floor of the Royal Academy of Arts (RA) in London in time for the launch of the RA’s next blockbuster show in its Sackler Galleries, Matisse in the Studio, which opens to the public next week (5 August-12 November).

The first artist-led redisplay of 21 works by fellow Academicians include Anthony Caro’s Mouchoir from his Cascade series (1990), which drapes over the plinth on the stone ledge, the RA’s statuette of Frederic, Lord Leighton’s muscular nude, The Sluggard (1885), as well as pieces by Rebecca Warren and Michael  Sandle, among others. They span 200 years and 14 of the sculptures are Diploma Works, which every new Academician presents to the Collection when they are elected.

Four works in wood by Joe Tilson, Fire Ladder, Air Ladder, Water Ladder and Earth Ladder (around 1971), lean against the gallery’s glass wall in the lift shaft. At a private view for the installation, Richard Deacon RA Selects, earlier this month, Deacon revealed: “The first piece of contemporary art I had physical contact with was a Joe Tilson in 1966 when I lugged Vox Pop up the spiral stairs of Plymouth Art Centre, where I moonlighted as an installer. These do something perfect in the space, they lean like ladders and play off the [Robert] Clatworthy cat in the window,” referring to a small bronze feline perched on a RA library window ledge, which visitors will see best from the galleries’ glass lift.

“I always thought this was a great space. The shelf is the outside of a building on the inside of another building,” says Deacon, describing how the architects Norman Foster and Spencer de Grey expanded the institution by infilling space between and on top of the RA’s historic buildings more than 20 years ago.

Jillian Sackler, the widow of the benefactor who made the RA’s expansion possible in the late 1980s, said how happy her late husband, Arthur Sackler, would have been to see the space filled with sculpture, as he had hoped. The loan of the RA’s Taddei Tondo by Michelangelo to the National Gallery, which was formerly shown in the space, was one reason why fellow artist, Academician and RA President, Christopher Le Brun invited Deacon to redisplay the gallery with more sculpture from its collection. The installation was overseen by Maurice Davies, the RA's head of collections.

The redisplay provides an early preview of other treasures that will be revealed during the RA’s anniversary celebrations marking its 250th birthday that begin in earnest in 2018, said Le Brun.

Deacon, who won the Turner Prize in 1987, has juggled the sculpture redisplay at the RA with judging the Art Fund’s UK Museum of the Year Award and two major solo shows. At the San Diego Museum of Art, What You See Is What You Get, is the British artist’s  first major US museum survey (until 4 September) while at the Middelheim Museum in Belgium, he is showing more than 30 works in Some Time (until 24 September).