Take a peek inside The Shed, New York’s new arts and culture space due to open in 2019

The figure of former New York City mayor Michael Bloomberg loomed large at a recent hard hat press tour of The Shed, the multidisciplinary arts and culture centre under construction in Hudson Yards, due to open in 2019. And it was with good reason. Not only is the massive redevelopment project being built over the railway yards on Manhattan’s far west side one of the former mayor’s parting legacies, but The Shed had just received a $75m gift from Bloomberg Philanthropies, bringing its fundraising total to $421m towards a $500m capital campaign goal.

While Bloomberg himself did not attend the preview, The Shed’s chairman, Daniel Doctoroff, recalled that he had tasked those behind the new building “to make it like nowhere else in the world”. And while only the skeleton of the six-level structure—which is meant to house art exhibitions, theatrical and musical performances, dance, and experimental labs for artists—has been completed so far, there are already some elements that set The Shed apart.

The most obvious of these is a telescoping shell on wheels that serves as both a façade for the gallery spaces and a flexible canopy that can be extended to enclose a public plaza. The shell’s steel frame will be insulated using Teflon-based polymer pillows that have the same thermal protection as glass cladding at one-third the weight. The whole structure can be deployed in five minutes using the amount of horsepower need for one Prius electric car thanks to massive steel wheels in rail tracks run by motors on the roof. “This project is bone and muscle and there's no fat,” said the architect Elizabeth Diller, of Diller Scofidio + Renfro, who designed the building in collaboration with the firm Rockwell Group.

Details on future programming have not yet been announced by The Shed’s artistic director, Alex Poots did unveil the space first—“and probably only”, he said—permanent work of art. This is the text piece IN FRONT OF ITSELF by the veteran artist Lawrence Weiner, to be fabricated in coloured paving stones in the plaza. Weiner, who was on hand at the preview, said he was impressed with the building but admitted “I had nothing to do with that… I’m just a happy passenger.” 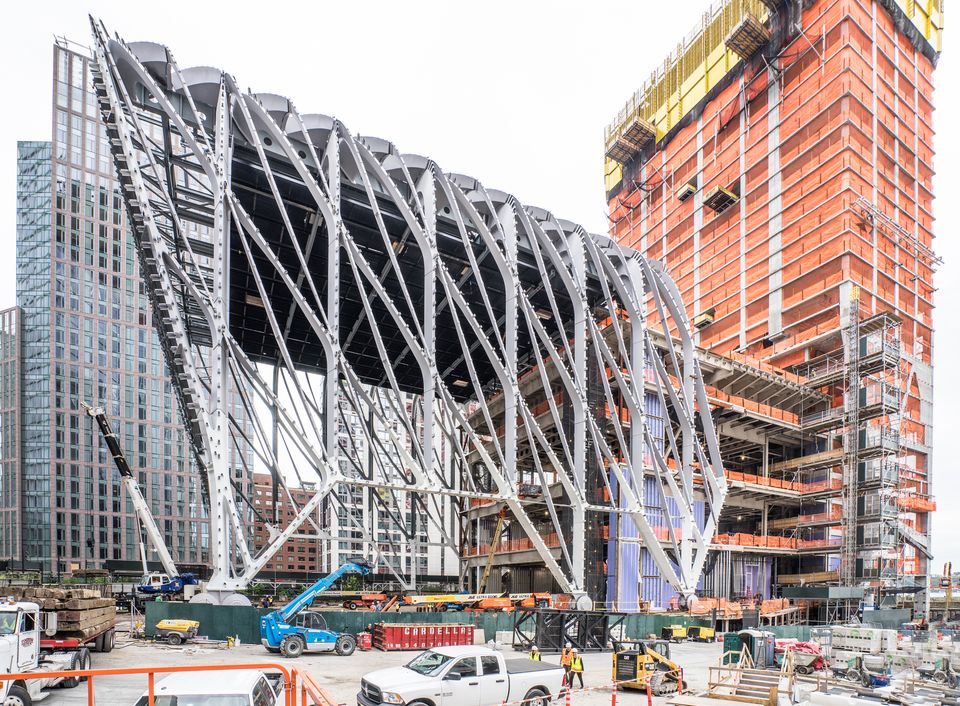