To break through the Modernist cube: on Lygia Pape at the Met Breuer

The artist's work is part of a broad tendency to escape the bounds of Modernism, but it is complicated by its nostalgic mood

About halfway through A Multitude of Forms, Lygia Pape’s first career survey in the United States (on now at the Met Breuer), viewers encounter a projected video of a vast white cloth cut with holes from which dozens of smiling faces poke through. The undulant mass of people and fabric move as a collective volume, enacting a poetic reconciliation of body and canvas, figure and ground. Titled Divisor (“Divider”), this participatory work is an obvious highlight of the exhibition—so much so, in fact, that images of it are used in the show’s publicity materials. It is also an encapsulation of one of Brazilian Neo-concretism's central ambitions: to make the activation of space a political metaphor.

Originally making pristine, if relatively rigid, geometric abstractions, Pape reached artistic maturity under Brazil's military dictatorship, which began with a US-backed coup in 1964 and lasted until 1985. Ultimately, she moved away from rationalism and rectilinearity towards a more expansive and organic programme that embraced anthropology, film and performative ritual. Although she played a key role in the development and subsequent deconstruction of non-objective art in Brazil, Pape (1927-2004) is less known to North American audiences than other Brazilian Neo-concretists like Lygia Clark and Helio Oiticia (the latter is the subject of a survey coming to the Whitney Museum in July).

Visitors familiar with these figures are likely to recognise the Met exhibition’s narrative arc and animating telos: the move from fictive, geometric space into social space and from passive contemplation into viewer participation—or, simply put, the move from art into life. At the Met, this story is masterfully told, even if it is a little overly familiar, leaving little doubt about the beauty and intellectual richness of Pape’s work or its historical importance. Its implications for the present, however, ultimately depend on one’s investments in participatory art as a political model.

In the mid-1950s, Pape painted fine diagonal lines and rhomboid shapes in dynamic tension on modestly-sized square fiberboard panels. These early abstract paintings show not only a clear debt to Russian Constructivism (and to Malevich in particular) but also affirm a belief in progress that was in step with Brazil’s ambitious modernisation program. The pre-dictatorship president Juscelino Kubitschek famously promised to deliver to Brazil “fifty years of progress in five.” The Concretists, as the critic Ronald Brito has observed, “fitted themselves perfectly into the reformist and accelerated objectives of the continent and, to a certain extent, served as agents for national liberation in the face of European cultural dominance, signifying, at the same time, an inevitable dependence on it.”

But Pape’s Concretist phase did not last long. In 1954, Pape, along with Clark, Ivan Serpa and others, formed Groupo Frente in Rio de Janiero. Putting an increased emphasis on the expressive, rather than purely rational, potency of geometric forms, they parted ways with what they came to see as the “mechanistic objectivism” of the Sao Paulo-based Grupo Ruptura (lead by the hardline Concretist Waldemar Cordeiro). This partisan schism intensified with the publication of the Neo-concrete Manifesto in 1959 by the poet Ferreira Gullar. “Neo-concrete art,” he wrote, "born out of the need to express the complex reality of modern humanity inside the structural language of a new plasticity, denies the validity of scientific and positivist attitudes in art and raises the question of expression.” (The Groupo Ruptura artists were unsympathetic, accusing the Neo-concretists of expressive lyricism and of lacking formal rigor.)

The same year, Pape showed her Tecelares (1959), or weavings, at the first Nonconcrete Exhibition at the Museu de Arte Moderna in Rio de Janeiro. Reinventing the folky medium of the woodcut, her black-and-white abstractions on Japanese paper vibrate in the living geometry of wood’s natural grain. These transitional works, Pape said, embodied "the principle of ambiguity." There was "no privileged position for a base or bottom," no straightforward relationship between figure and ground. (Much later, Pape literalised this idea of weaving in space with a splendid room-sized installation of intersecting golden wires titled Ttéia 1 from 2002.) The shift began in earnest with Ballet Neo-Concreto I (1958), which Pape choreographed based on a poem by Reynoldo Cardim. In the work, brightly lit cubes and cylinders are animated by dancers concealed within, making it seem as if the shapes glide autonomously across the stage. Nearly a decade later, anthropomorphised geometry returned in a performance on a Rio beach titled O ovo (“The Egg”) from 1967, in which Pape hid inside a hollow white cube before rupturing its plane and crawling out onto the sand. In a similar piece, Pape filmed Oiticia and two Samba musicians bursting from boxes painted in vibrant primary colors. 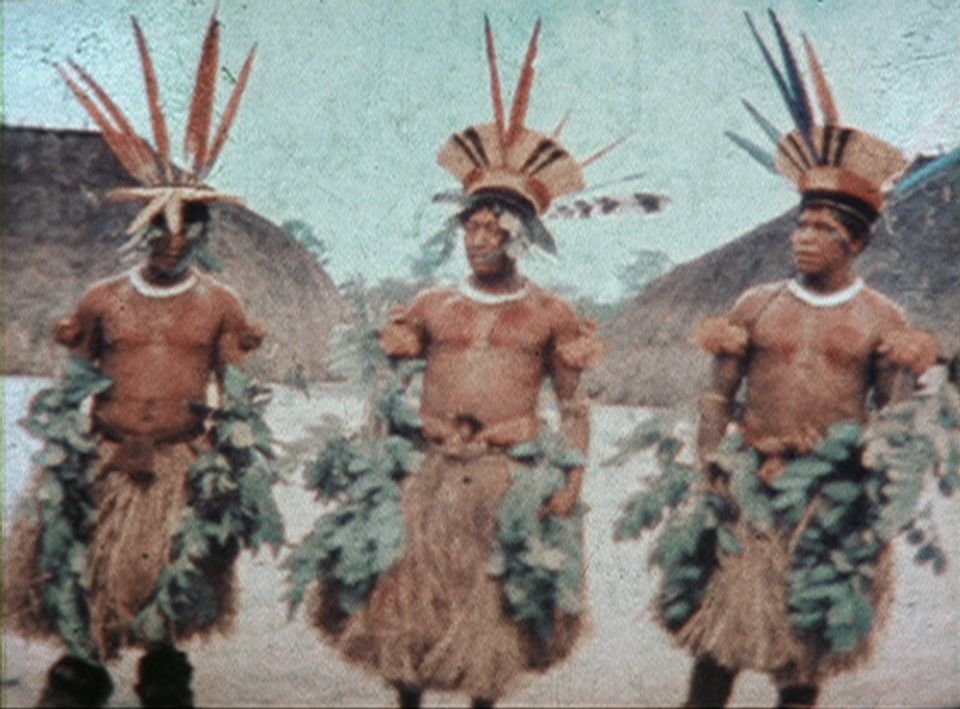 The broken cube is part of a broader tendency in Post-war art, from Lucio Fontana’s lacerated canvases to Saburo Murakami's broken paper screens, where the violated picture plane stands for the symbolic transgression of the institutions and conventions of fine art—a declension from ideal space into reality. This impulse was collectivised in Pape’s Divisor, which was first realized with a group of favela children in 1967 and performed again in the gardens of the Museu de Arte Moderna in 1968. (The big projection in the Met exhibition shows a 2010 reenactment). The Divisor itself is a diaphanous communal envelope—something of an angelic counterpart to Oitica’s sensuous parangoles, cape-like wearable works meant to be enlivened by Samba dancers from Rio’s shantytowns.

The Divisor evokes Gullar’s theory of the non-object: a contingent, participatory work of art that “exists in potential, awaiting the human gesture that will actualise it.” But this mass of bodies cannot be thought apart from the demonstrations led by those who opposed Brazil's dictatorship. Pape participated in the largest of these protests, the March of the One Hundred Thousand on 26 June 1968. Given this grim historical background, the Divisor exudes a solar optimism about political potential. It could easily be read as a piece de resistance, its effervescent collectivism resonant with today’s protest movements. In his New York Times review of the show, Jason Farago wrote: “What the times required—and what today’s Brazil, today’s America, may require, too—was neither art for art’s sake nor blunt propaganda, each in its own way a cop-out. They required an art plunged into life itself, uniting disparate figures into new fellowship, all under a common sheet.”

It might be somewhat clarifying, if a little deflationary, to think about the Divisor less as a model of artistic resistance than as a marker of the twilight of Brazil’s vibrant cultural avant-garde. Prior to the infamous Institutional Act No. 5 in December 1968, which suspended constitutional rights, the avant-garde had been largely insulated from state brutality and suppression. Without discounting its romantic symbolism, the Divisor might also serve as a caution against what the Brazilian cultural critic Roberto Schwarz called “mutual confirmation”—filter bubbles in today’s lingo.

While many of her fellow artists went into exile—Oitica to New York and Clark to Paris—Pape remained in Rio and directly confronted Brazil’s history of colonialism and oppression. In 1973, she was imprisoned for three months and tortured for giving aid to political dissidents, but she worked on and made documentary films about the country's marginalised, poor and indigenous cultures. The most compelling and problematic works in the Met’s show, these films and related ethnographic projects find vital abstract forms in the forgotten and degraded art and culture of Brazil’s indigenous underclass.

Yet Pape sometimes risks a queasy romanticisation of poverty. A slideshow projected on the wall pays tribute to the “anti-architecture” of the favelas, which, for Pape, seemed to actualise the Neo-concretistist emphasis on synthetic, anti-hierarchial principles. These squalid and provisional dwellings, she wrote, offered the freedom “of self-expression in the collective space—turned outwards, open to the world like fruit that has been broken through its rind; outside and inside as equals: a Moebius strip.” The film Our Parents "Fossilis" (1974), composed of images of postcards of Brazilian Indians and set to a native song, is mournful of Brazil’s destroyed ancestral heritage mediated through touristic kitsch.

A lapsarian mood also predominates in Hand of the People (1975), a short didactic film made for the Ministry of Education about the loss of indigenous craft traditions. Over footage that juxtaposes ceramics and patchwork quilts with mass-produced bric-a-brac, a voiceover explains that alienated “from his psychological and cultural roots,” the rural artisan becomes a “consumer of the most banal kitsch. Plastic flowers, a plastic cover for the blender, the refrigerator penguin. From a natural existence he now moves on to existence in a ‘half culture.’”

It is difficult to have an uncomplicated relationship to these works. The noble, anti-colonial intentions are clear, but so is an inescapable condescension. “Marginality,” Pape once wrote without elaborating, “is a bourgeois concept.” It’s a contradiction that haunts her anthropological films and cuts through her late Modernist utopianism.