Worth the pilgrimage: on Francesco de Mura at Vassar College

Much of this long-neglected Baroque artist's work is lost, but what remains is worth another look 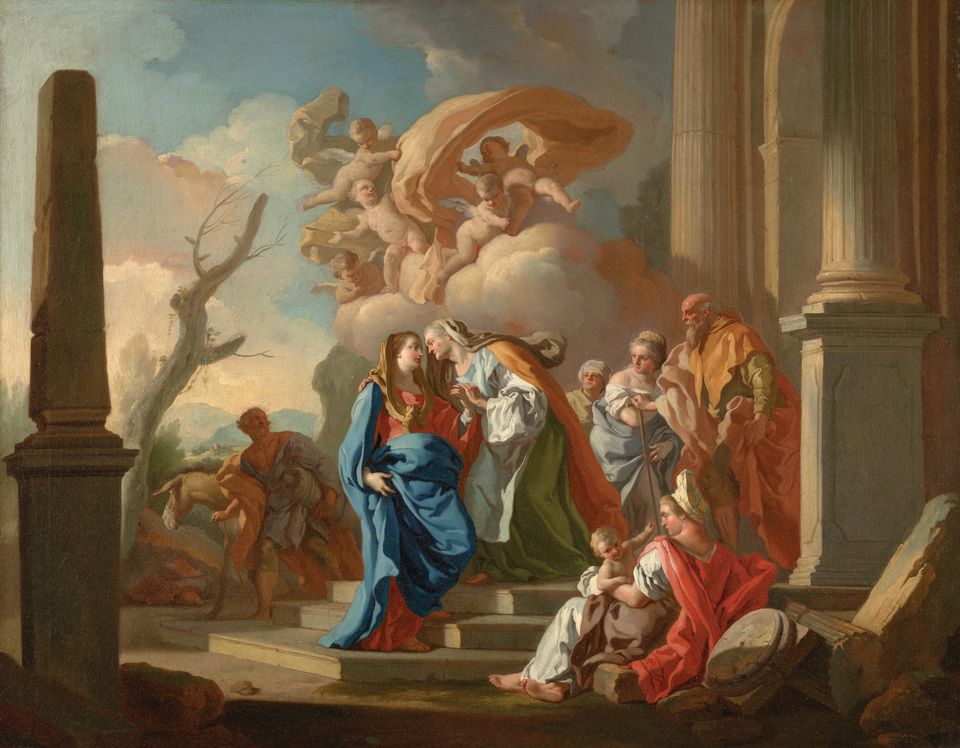 Now at its final venue, the stunning exhibition In the Light of Naples: the Art of Francesco De Mura is the first ever show devoted to the Neapolitan Baroque painter, who lived from 1696-1782. Occupying three small galleries at the Frances Lehman Loeb Art Center at Vassar College in Poughkeepsie, New York, it features three drawings and 37 pictures by the artist, as well as one spirited bozzetto by Francesco Solimena (De Mura’s master from 1708 until 1729), two works by Corrado Giaquinto and one by Giacinto Diano, a pupil of De Mura.

Solimena, at the time one of Europe’s greatest, most successful painters, must have taught De Mura well. His pupil's gifts are vividly summarised in 1745 by the Neapolitan art historian Bernardo De Dominici, who described a copy of a devotional painting that the ten-year-old apprentice made in Solimena’s studio as “beautifully combining the tints with softness and sweetness”. Such features are equally present in a far later, meltingly beautiful Madonna and Child with the Infant Saint John from the 1760s (lent by the Hearst San Simeon State Historical Monument).

At his best, De Mura presents a world one can only dream of: glorious spectacles of color and light, peopled by noble, athletic-like saints and soaring members of the Godhead. Such a scenario is thrillingly present, for instance, in the more than six-foot high Vision of Saint Benedict (around 1738-40, lent by the Museo di Capodimonte in Naples). De Mura prepared this work for one of the ceiling frescoes he completed in 1740 in the church of Santi Severino e Sossio in Naples. When done, the mural cycle caused a sensation: day after day, De Dominici reports, the church filled up with admiring crowds. With its cool palette and heartfelt narrative, the frescoes heralded a new moment in the spiritual and artistic history of the city.

Soon after De Mura left Solimena’s studio in 1729, major projects came his way, such as a series of paintings of the life of Christ and the Virgin Mary for the church of the Nativity in the Holy Sepulcher at Jerusalem. This was followed by commissions for over 30 paintings for the great Benedictine Abbey at Monte Cassino, already decorated splendidly in fresco by Luca Giordano, who had a lasting impact on De Mura’s style. From Giordano, who had been Solimena’s teacher, Francesco absorbed major lessons in the art of composition.

After finishing his work for Monte Cassino in 1738, De Mura was in demand by the young Charles VII, the first of the Spanish Bourbons to rule the Kingdom of Naples. To celebrate his marriage that year, Carlo di Borbone (as he liked to be called) commissioned De Mura to paint a ceiling (now no longer extant) for the prima anticamera in Naples’ Palazzo Reale. A preparatory oil sketch (now Palacio Real, Madrid; not in exhibition), depicting the Bourbon and Saxon coat of arms with a host of allegorical figures, was dispatched to Madrid in October 1738 for approval by Carlo’s mother, Elisabetta Farnese, the Queen of Spain. 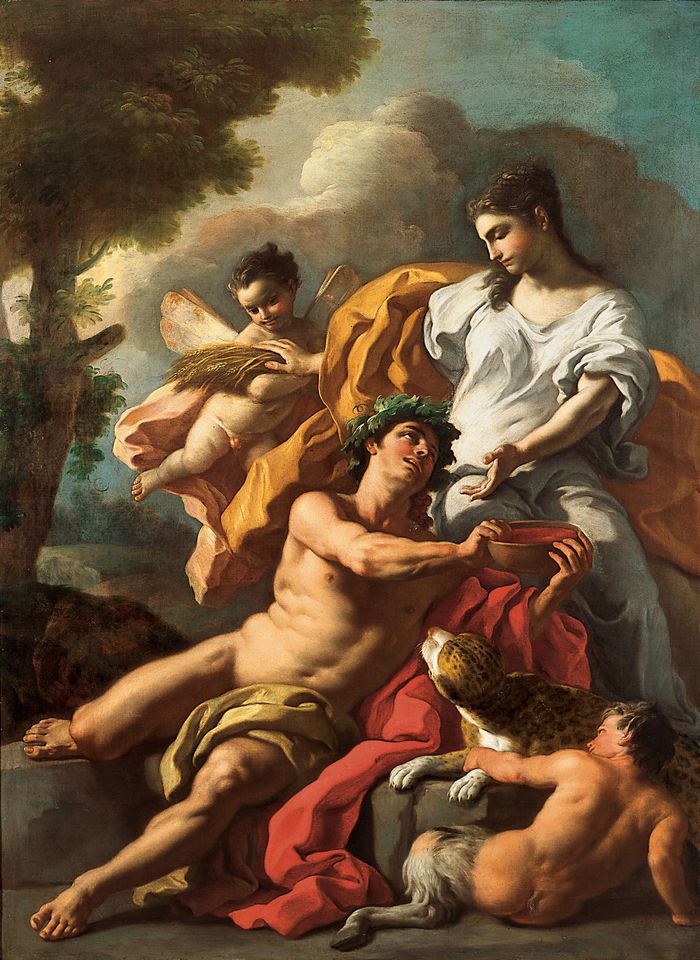 In 1759, when Carlo di Borbone transferred to Spain and became King Carlos III, he invited De Mura to serve as court painter. For unknown reasons, the artist did not comply. In the meantime, he had been gainfully employed by the House of Savoy. By 1748, for instance, he had completed six ceiling frescoes for the Palazzo Reale in Turin. It was probably for the same location that De Mura painted one of his noblest creations, the Charity (Art Institute of Chicago) of 1743-44, which unfortunately was not part of the Vassar College venue.

Why, considering De Mura's long and rewarding career, does he remain so under-appreciated? Early on, he established a vibrant artistic persona, but at mid-career, he likely lost some commissions to Solimena, the admittedly greater artist, who lived until 1747. Later, at an advanced age, De Mura also would have experienced the rise of Neo-Classicism and the concomittent dismissal of the barocchetto style. (Such, after all, was the partial fate of as great an artist as Giambattista Tiepolo.)

Two other conditions, in more recent times, have hampered De Mura’s critical renown. The first was the huge loss of his work at the Benedictine Abbey at Monte Cassino, which was destroyed in the Second World War; it held about a third of his total output. One small picture in the exhibition, Saint Carloman Presented with the Benedictine Habit by Pope Saint Zacharias (around 1730, private collection), is preparatory to one of De Mura’s lost altarpieces for the abbey. The drama depicted is palpable: energised figures, in a wide variety of poses, circle about the young saint. The grace and piety evidenced here by Carloman remind one of certain altarpieces by the Rome-based master, Pierre Subleyras.

The other hindrance is inaccessibility. The church of the Nunziatella in Pizzofalcone in Naples, which contains brilliant frescoes from 1732 and 1750-51, is now a military school and is closed to the public. Also, the nearby Pio Monte della Misericordia opened its doors only relatively recently, in 1972; but only 39 of the 192 paintings that De Mura bequeathed to the confraternity remain in situ. The remainder were sold off according to his wishes to further the city's charities. Moreover, Naples, which Carlo di Borbone did so much to develop as a major European metropolis, has in modern times been deemed a lesser stop on art pilgrimages.

Yet it is worth making such journeys; one painting in the Vassar exhibition, Christ and the Samaritan Woman (dated 1752, lent by the Seattle Art Museum), is alone worth the visit to Poughkeepsie from anywhere in the world. With its scintillating palette, grand, almost enigmatic gestures, narrative brilliance and consummate painterly bravura, it surely ranks among the greatest paintings produced in 18th-century Italy.

The credit for this worthy project—including its inception, fund-raising, loan selection and the years of research that have culminated in a handsome and substantial catalogue—is due principally to the Cornell Fine Arts Museum’s director emeritus, Arthur Blumenthal. He was generously advised by Nicola Spinosa, the former director of the Museo di Capodimonte and today's leading specialist on Neapolitan Settecento (18th century) painting.

Eliot Rowlands is a New York-based freelance art historian who specializes in early Italian paintings. Among his publications are The Collections of the Nelson-Atkins Museum of Art: Italian Paintings, 1300-1800 (1996) and Masaccio Saint Andrew and the Pisa Altarpiece (2003).

In the Light of Naples: the Art of Francesco De Mura, Frances Lehman Loeb Art Center at Vassar College in Poughkeepsie, New York, until 2 July