The repatriation debate intensifies as calls for post-colonial restitution grow—but is it legal? 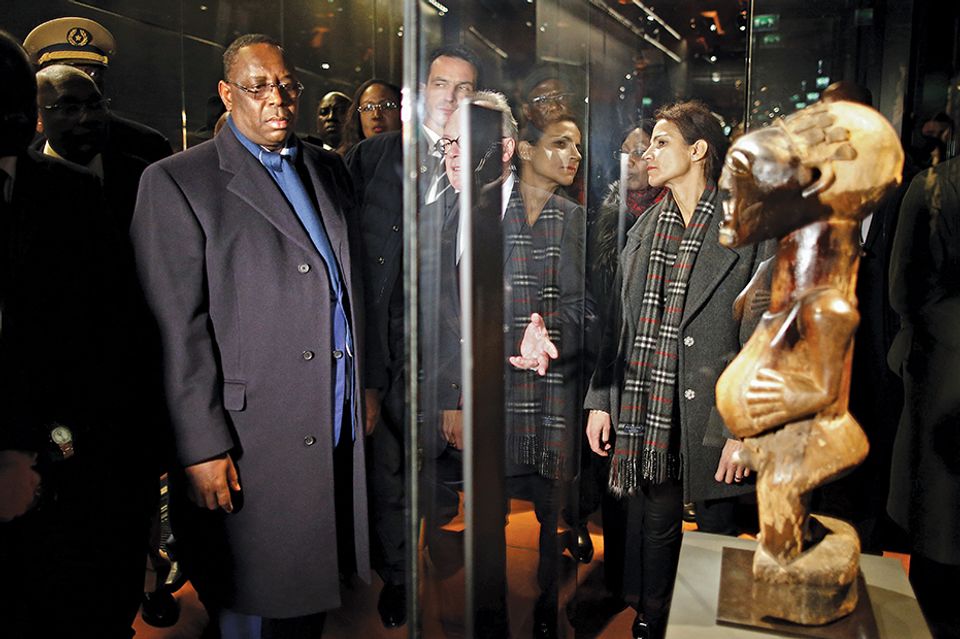 The Senegalese president, Macky Sall, at the Musée du Quai Branly-Jacques Chirac museum in 2016. The country has said it wants the return of all objects from Senegal in French museums © Charles Platiau/AFP/Getty Images

The aims of a controversial report recommending “swift restitution” of colonial-era artefacts from French museums to Africa may be difficult to achieve legally.

The so-called Savoy-Sarr report commissioned by President Emmanuel Macron and published in November recommends the full restitution by French museums of works taken from African colonies “without their consent”. The “main obstacle” to restitution is “the inalienability of public collections”, according to the report. In other words, works in French national collections cannot be sold or transferred.

The same principle applies to other countries based on Roman law, such as Spain, Italy and Belgium. But in Germany, the Netherlands and Denmark, for example, the inalienability of art collections is not fixed by law. And in the US, with the exception of the Smithsonian Institution’s collections, deaccessioning is common practice. So restituting Italian statues looted by tombaroli (grave robbers) posed few problems for the Metropolitan Museum in New York or the Getty Museum in Los Angeles.

In the UK, national museums are normally legally unable to deaccession objects in their collections. Works in the British Museum are specifically protected by an act of parliament, the 1963 British Museum Act. However, exceptions have been made for Nazi-looted works as well as human remains under the 2004 Human Tissue Act.

But all eyes are now on France. Despite the legal hurdles, restitutions are possible but only through a drawn-out process. President Macron’s decision earlier this month to return 26 plundered items to Benin “without delay” will have to be approved by parliament. Similarly, when the Muséum de Rouen discovered a “toi moko”—a tattooed head of an ancient Maori warrior—in its collection in 2011, restitution to New Zealand had to be approved by a special act of parliament, which took four years. The same procedure was applied to the return of the remains of the so-called Hottentot Venus, the preserved body of a woman from southern Africa, in Paris's Muséum National d’Histoire Naturelle.

One way of returning items more quickly is through loan agreements. The Musée du Quai Branly-Jacques Chirac, for example, sent looted Nok terracotta figures back to Nigeria on a 30-year loan. Similarly, former President Nicolas Sarkozy restituted 300 Korean royal manuscripts that were looted by French troops in 1866. They are now in the National Archives of Korea on a renewable five-year loan—but few expect them to ever return to Paris.

In 2016, a provision added to France’s Code of Heritage stated that the acquisition of any cultural goods could be cancelled if they proved to be “stolen or illicitly exported”. But its application to Nazi-looted art was rejected and items coming from former colonies were not covered by the new provision. As a result, when Benin lodged its first restitution claim that year, President François Hollande simply replied that “restitutions were impossible under French law”.

The authors of the Savoy-Sarr report have therefore suggested the introduction of an “entirely new and specific procedure for restitutions”, based on “bilateral agreements”, allowing national and local authorities to sign simple orders for the transfers to take place. By creating an obligation through France’s international relations, it is suggested that restitution of the artefacts would override any domestic principle of inalienability.

Nevertheless, the matter is complicated by items with problematic provenance that were bequeathed to French museums by civil servants, officers or ethnologists. Donations and bequests are often given on the basis that they will be kept and looked after by the museum in perpetuity.

The report is only a first step towards addressing the issue of post-colonial restitution, but suggests the solution might require a new law to cover the return of objects taken by “violence or deceit” during the colonial period.