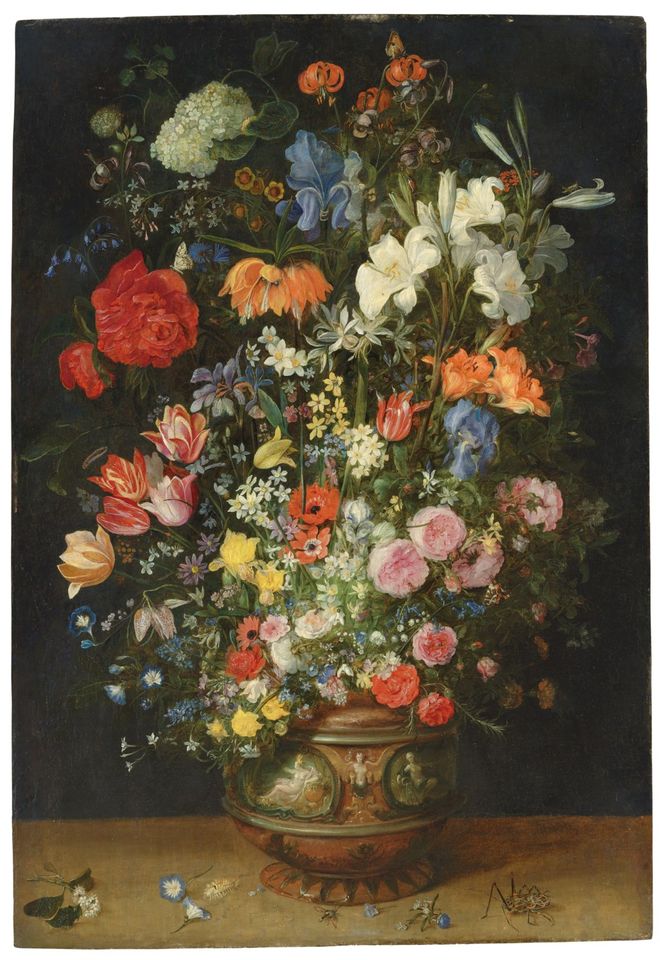 Jan Breughel the Elder's Lilies, tulips, roses and other flowers in an ornamental vase on a ledge, with butterflies and beetles (around 1620) Courtesy of Christie's

Fewer, thinner, with just the occasional morsel of excitement.

Such were the sales that the London’s auction houses were serving up as a Brexit-dominated general election loomed. On Tuesday night, Christie’s held its traditional pre-Christmas evening sale of Old Master paintings. With many would-be sellers of valuable pictures suffering from geopolitical jitters, Christie’s had to pad out the 44-lot offering with sculptures and drawings. Its Old Masters day sale on 4 December also mixes paintings and sculpture. The rest of the drawings were offered in an online auction ending on 5 December.

“It’s difficult in all the traditional markets,” says Hugo Nathan, founding partner of the London-based art consultancy Beaumont Nathan. “There is a problem with supply. This has been exacerbated by Brexit, the election and political concerns. People don’t want pounds.”

The main successes of the evening were an exquisite pair of 15th-century predella panels by the admired Sienese painter Giovanni di Paolo, recently restituted to the family of the Jewish telecommunications magnate Harry Fuld. The paintings had been seized by the Nazis and sold to the Bode Museum in Berlin in 1940. 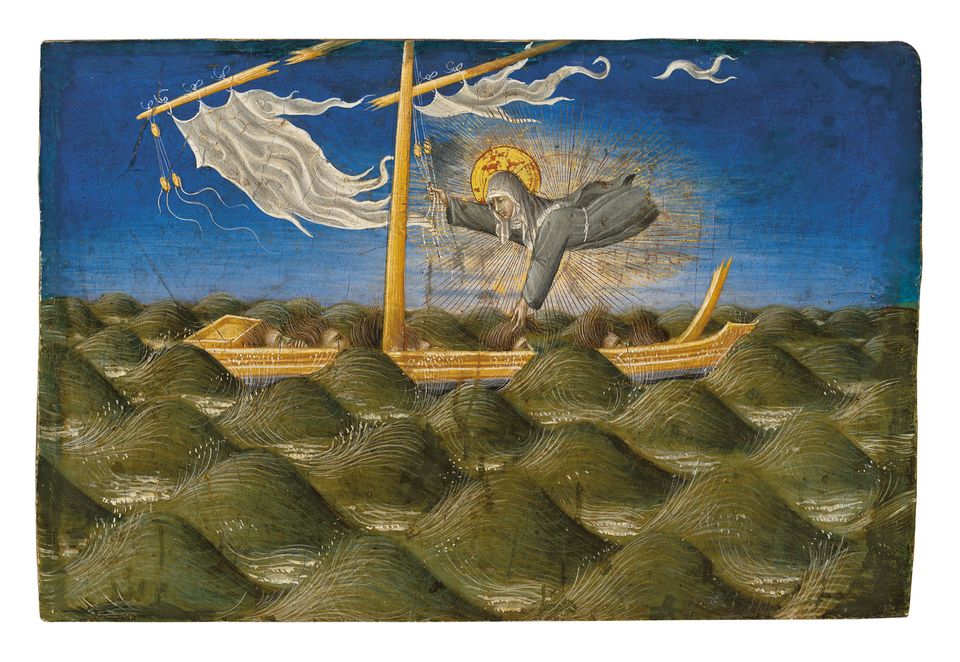 The narrative predella paintings at the base of an altarpiece were where late Medieval and early Renaissance Italian artists let their creative hair down, producing scenes with the sort of visual invention that can charm wealthy buyers from any collecting field.

These finely preserved examples, from an altarpiece for the Poor Clares order, now in the Pinacoteca Nazionale gallery in Siena, were thought to date from the 1450s. They respectively showed Saint Clare in full super-hero mode, flying through the air to rescue Pisans from a ship in dark and stormy sea resembling a field of molehills, and the young Saint Clare receiving the clothes of her Order from Saint Francis.

Both sold to the same telephone bidder, who saw off the opposition with a succession of intimidating £400,000 “jump” bids. The shipwreck scene predictably topped the auction with a price of £5.3m—an auction record for the rare Giovanni di Paolo—and The Investiture of Saint Clare took a further £3.6m. They had been respectively estimated to sell for at least £1.5m and £600,000. 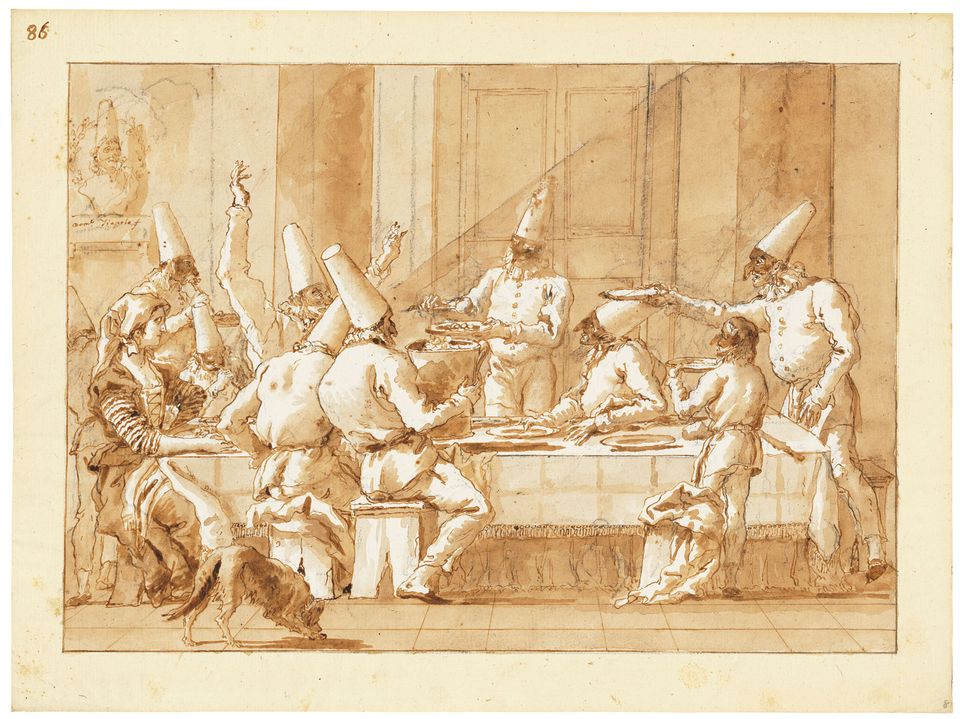 The other main excitement was provided by a series of six Punchinello drawings by Giovanni Domenico Tiepolo. Begun in the 1780s, these enigmatic pen-and-ink studies, in which the Venetian artist uses extended families of the commedia dell’arte character to create a carnivalesque running commentary on contemporary life, are much-prized by collectors, but rarely appear on the market.

This group, in fresh condition from the prestigious Brinsley Ford collection, raised £3.9m with Punchinellos Feasting setting a record for a drawing by G.D. Tiepolo at £995,250.

“No one understands the story, but they are everything you want in an 18th century Venetian drawing, ” says Stephen Ongpin, a London-based dealer in master drawings, who bought the last lot of the six, Punchinellos at a Carpenter’s Workshop, for £443,250.

Elsewhere, decorative Old Master paintings, particularly opulent Netherlandish flower studies, were selling for solid prices to telephone bidders. A hitherto-unknown large, ornamental floral still life on panel by Jan Breughel the Elder, from around 1620, sold for £755,250, three times the upper estimate. A much more ambitiously valued and better-known Ambrosius Bosschaert the Elder still life of flowers in a Chinese vase, from around 1618, formerly on loan to the Dulwich Picture Gallery, took a low estimate of £1.6m.

“It’s a bit thin, but I’ve sold over half a million [pounds] of art for my clients at above-estimate prices,” says Johan Bosch van Rosenthal, an art consultant based in Amsterdam, who consigned works into the Christie’s auction. “There’s a lot of good money out there if paintings are fresh and reasonably estimated.” But Bosch van Rosenthal adds that his clients wanted their proceeds immediately converted into euros, rather than holding pounds. “The uncertainty of Brexit is harming the market in England. And it will go on for two years.”