Hockney double portrait sells for £37.7m, accounting for half of Christie’s contemporary sale in London

Overall results are down 42.7% on last year, but European buying remains strong despite Brexit 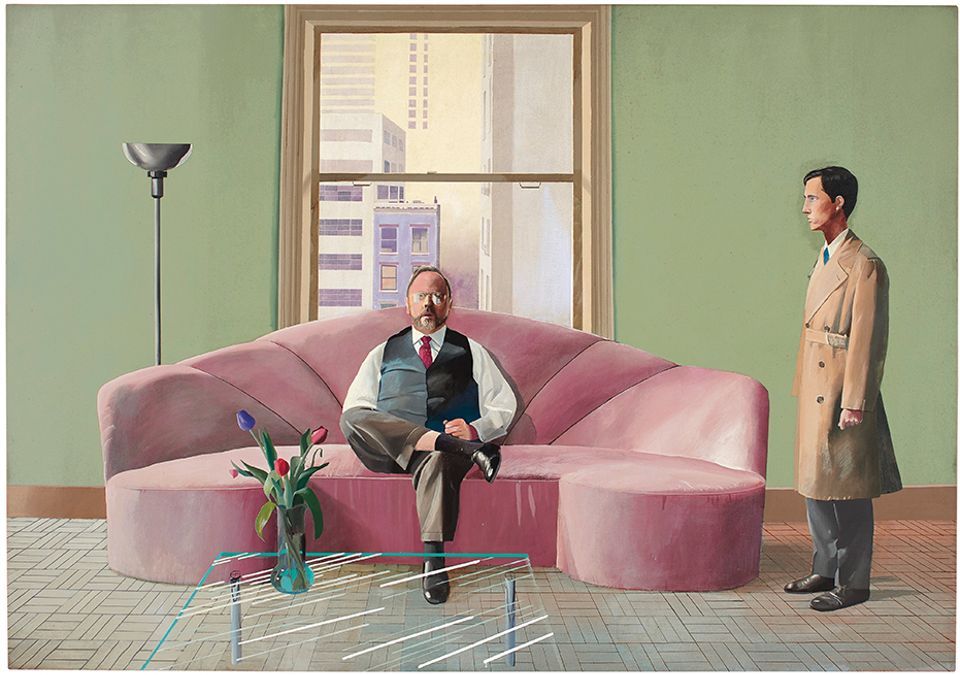 David Hockney’s charged double portrait of Henry Geldzahler and Christopher Scott notched up £33m (37.7m with fees) at Christie’s in London last night, making it the most expensive painting ever sold by a living artist in Europe.

Painted in 1969 when Geldzahler was the highly influential curator of 20th-century art at the Metropolitan Museum of Art and Scott was his boyfriend, the work accounted for half of the contemporary sale’s total of £67.4m (£79.3m with fees).

The result is down 42.7% on last year—a reflection of Christie’s decision to revert to three “more equally sized” auctions a year and not a sign of a struggling market, according to Katharine Arnold, the co-head of contemporary art. Indeed, with 41 lots, the sale was tighter and spritelier than at Sotheby’s the night before.

Christie’s is remaining tight-lipped about the buyer of the Hockney, which attracted four bidders, at least two of whom are likely to have been American, bidding through the US-based auction house executives Alex Rotter and Marc Porter. Guaranteed by a third party, so effectively pre-sold, it hammered on the phone to Amelie Sarrado, the right-hand woman to Christie’s London-based chief executive Guillaume Cerutti.

The London dealer Hugh Gibson, of Thomas Gibson Fine Art, who underbid on another Hockney gouache on paper, described the Geldzahler portrait as “more important than the one Christie’s sold in New York—and I'm not the only one who thinks it”. That double pool portrait flew for £70m, smashing the record for a living artist.

“Hockney is flavour of the month, and the [Geldzahler portrait] ended up quite cheap,” Gibson said (it had been estimated to exceed £30m). “But the air is quite thin at that level, there are few people who have £30m to spend on a painting.”

The Hockney was intended to have a “halo effect”, Arnold said, and indeed, there were flurries of activity for other groups of paintings.

Three oil paintings by the French painter of Russian origin Nicolas de Staël, created between 1952 and 1955—considered his best years—all went over estimate. The top seller was the vigorously executed Bouteilles (Bottles) (1952), which vaulted over its high estimate of £2.5m to fetch £3.8m (£4.5m with fees). There was Russian underbidding on all three lots.

The consecutive grouping was a calculated one by Christie’s, following its $12m record for the artist in New York last May. De Staël’s market is “certainly on the move and one to watch”, Arnold said.

A crop of younger painters also benefited from the Hockney effect. They included the New York-based artist Jordan Casteel, whose 2015 painting, Patrick and Omari, was up first and sparked a bidding frenzy among nine parties. It eventually sold four times over its high estimate on the phone for £240,000 (£299,250)—a record for the artist.

Unknown to some, Casteel’s record should not be seen as out of the blue; she is currently the subject of a solo exhibition at the Denver Art Museum.

With a sell-through rate of 93%, only three lots out of 41 went unsold. Among them a Peter Doig painting (est. £3m-£5m), which had recently been round the block.

Sourcing new material is the perennial problem for auction houses, and Christie’s did well to present a sale where 70% of material was fresh. Arnold noted that Brexit “is a reality”, but that the art market “is resilient and when you bring fresh material to market, you do have people who are consistent and ready buyers”.

Seemingly undeterred by potential delays at the ports and question marks over import and export duties after Britain leaves the EU, 50% of the sale by lot was sold to Europe. Meanwhile, 18% went to Asia and 18% to the US.

As Gibson summarised: “The money and appetite are still there, but people are being a bit more selective, which is no bad thing. It’s a sign of a comeback to normality, a more discerning market.”

Bonhams contemporary evening sale, meanwhile, made £1.6m (£2m with fees), with 87% sold by lot. This is markedly down from 2018 when the auction house made £4.4m, or £5.4m with premium. The top three prices were achieved for a diverse group: Josef Albers, William Kentridge and Lynette Yiadom-Boakye.