Inside Notre Dame: a blow-by-blow account of the restoration process 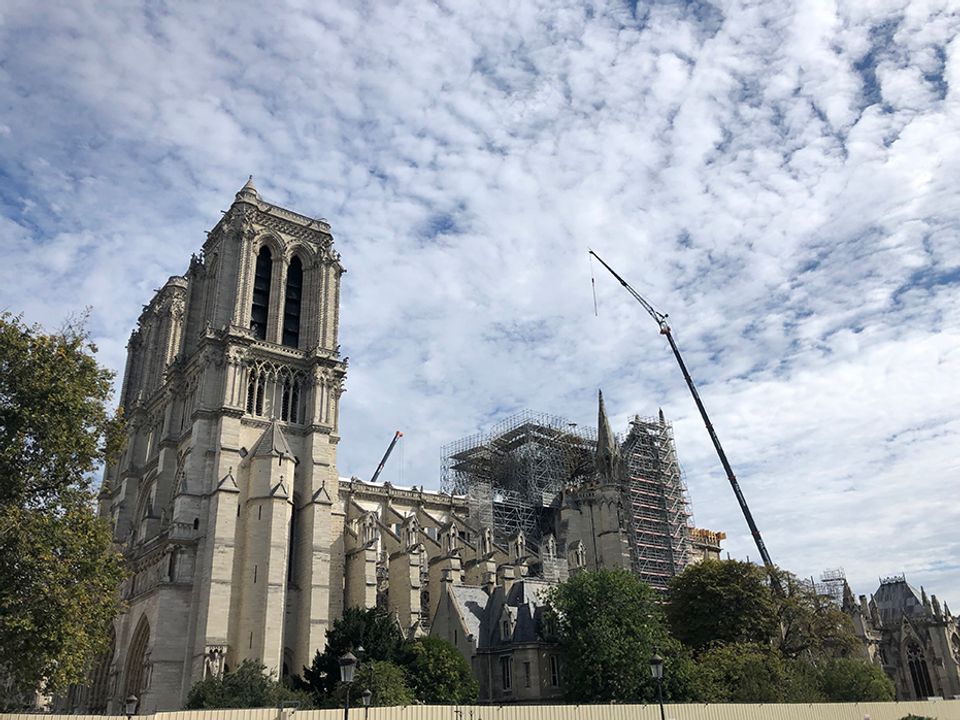 Five months ago, the world watched in horror as a raging fire consumed the roof and spire Notre Dame, Paris’s most famous monument, and threatened its very survival. Here is what has been done so far to consolidate the cathedral and prepare it for restoration and reconstruction

The large amount of debris that fell into the nave—masonry, burnt wood, lead tiles and so on—is being removed by robots because workers are not allowed in due to the risk of collapsing vaults. This operation will be completed soon and all the material removed is being kept for future examination and reuse. 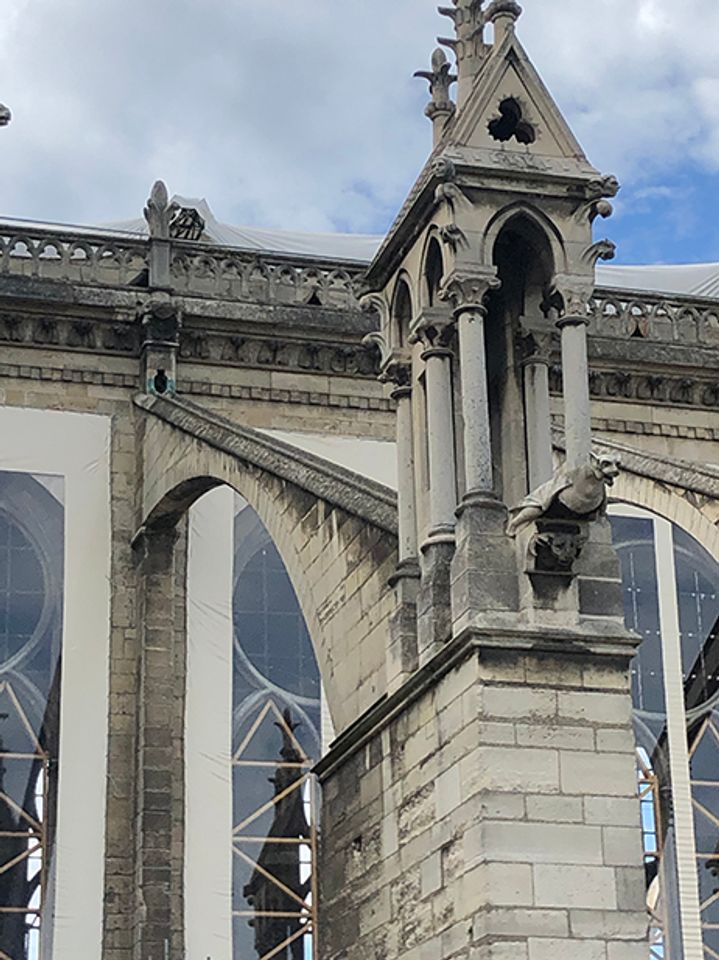 The temporary roof cover of the vaults

A cover has been put over the nave while the new temporary roof is being installed. Inside the nave, protective netting has been installed in case masonry or remaining parts of the roof collapse. The statue of the Virgin of the Pillar has been removed, while the main altar, with its famous group of baroque sculptures which depict the vow of King Louis XIII, has been boxed in. 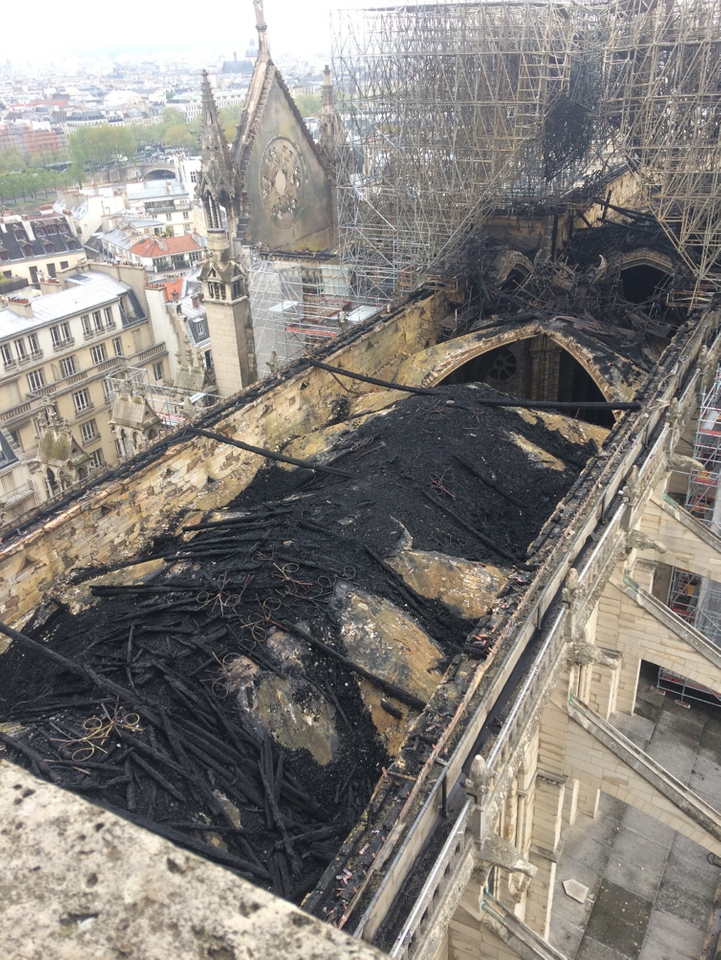 The roof space over the vaults after the fire

The fire has seriously weakened the stability of the monument. The vaults have lost most of their structural strength, and the absence of the roof and spire, which acted as ballast to the entire building, has put its main walls at risk. 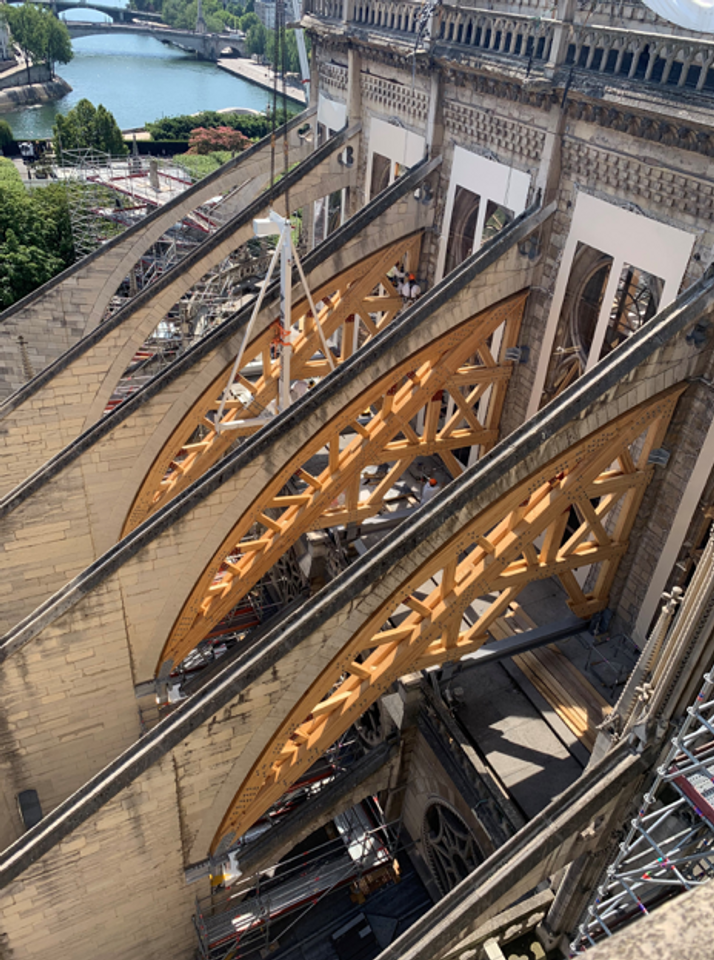 One of the flying buttress supports

While the vaults are still causing serious concern—some masonry has, in fact, fallen down—and will have to be rebuilt at some point. Major interventions have been carried out to limit the possible structural damage to the main walls of the cathedral; all the external buttresses have been reinforced with wooden frames to prevent them collapsing in case the vaults give way. 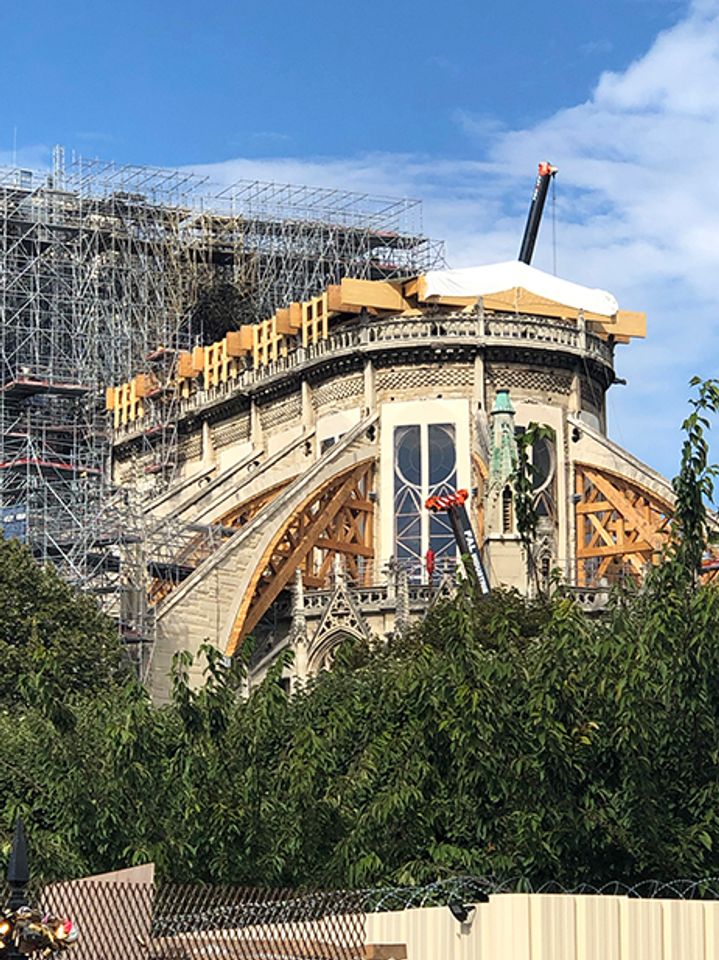 The platform over the vaults Photo HEIC

A series of 18m-long wooden beams has been positioned above the vaults to create an access platform for their structural testing and future reconstruction. 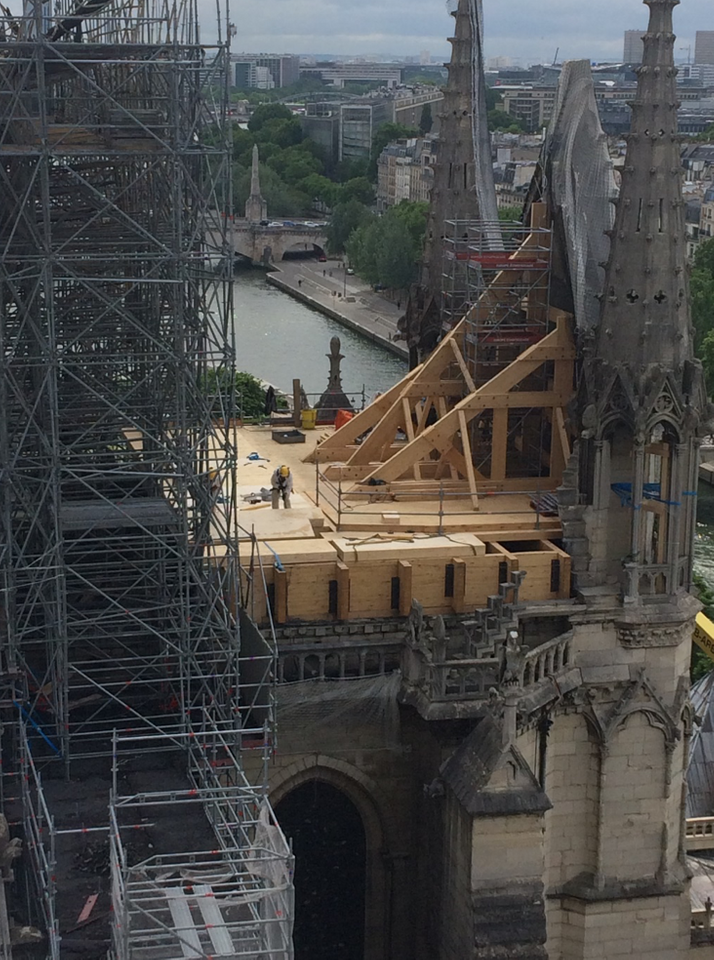 One of the gable supports

The north, west and south gables have been reinforced and buttressed with wooden structures. The Gallery of the Chimeras of the south tower has been secured and anchored with fibre belts. Two internal pillars of the cathedral damaged by the fire have also been reinforced. 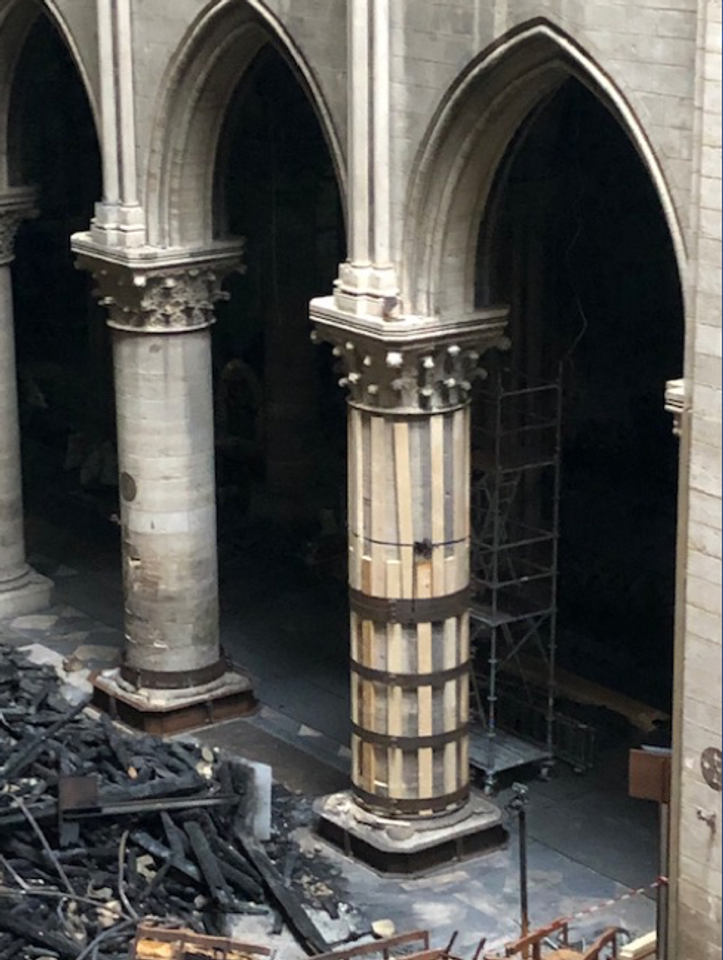 Reinforcements to the nave pillars

The 430-tons of lead tiling covering the roof of Notre Dame were completely destroyed by the fire. Parts fell into the nave, parts melted down the walls and parts were turned into dust that was spread around in the thick cloud of smoke that was dispersed by the wind over west Paris. Major worries about possible lead pollution forced the authorities to stop the consolidation work for most of August. Impressive security measures have been put in place to protect the health of the workers such as special access procedures, masks, hazchem suits, showers. Tests are currently being carried out to measure pollution levels around the cathedral and neighbouring parts of the city and to assess the possible health risk. 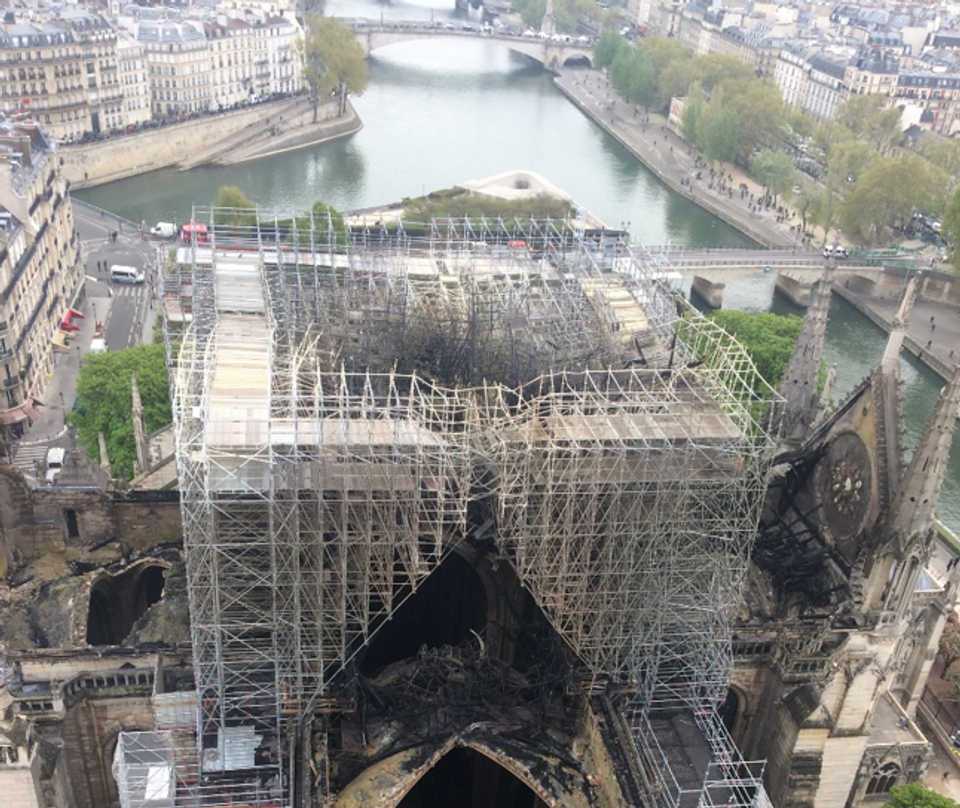 Aerial view of the fire-damaged scaffolding covering the cathedral

The most important activity will be the removal of the large metal scaffolding structures built before the fire for the restoration of the spire. This has been severely damaged and its removal will be a delicate and risky task, after which a new temporary roof will be built, to last until the final reconstruction.

The choir stalls will be protected. Finally, a wooden platform will be positioned under the vaults to allow their stability to be assessed in view of their replacement and reconstruction. This should be completed by the summer of 2020.

Up until now, the activities have been conducted under the direction of the architect-in-chief of Notre Dame, who has coordinated the specialist construction firms hired or transferred from other sites under an emergency procedure.

The new law has provided a general direction for the restoration approach, but has left space for diverging future decisions. While conservations both in France and around the world are unanimous on the need to respect the Unesco World Heritage status of Notre Dame and the international conservation charters, the way the law is phrased can still allow for more radical solutions. Among the issues at stake are some of crucial importance. How to rebuild the roof’s wooden structure? The traditional skills needed to recreate it as it was exist, and the right kind of wood is available, but will this be what gets decided? How will the roof be covered? Traditionally, cathedral roofs were covered with lead tiles, which are long-lasting and provide stabilising weight. But will lead be allowed after all the polemics over lead pollution have settled down?

The most critical question concerns the spire. Will this be rebuilt in the form designed by Viollet-le-Duc in 1860, as internationally adopted conservation principles recommend, or will it be the object of a contemporary “architectural gesture”, as suggested by the master-mind of Notre Dame’s restoration, President Emmanuel Macron?

• Francesco Bandarin is an architect and former senior official at Unesco, director of its World Heritage Centre (2000- 2010) and assistant director-general for culture (2010-2018).