Event marking anniversaries of the Emirati museum and New York University Abu Dhabi looked at museum collections, buildings and people, and the impact of coronavirus 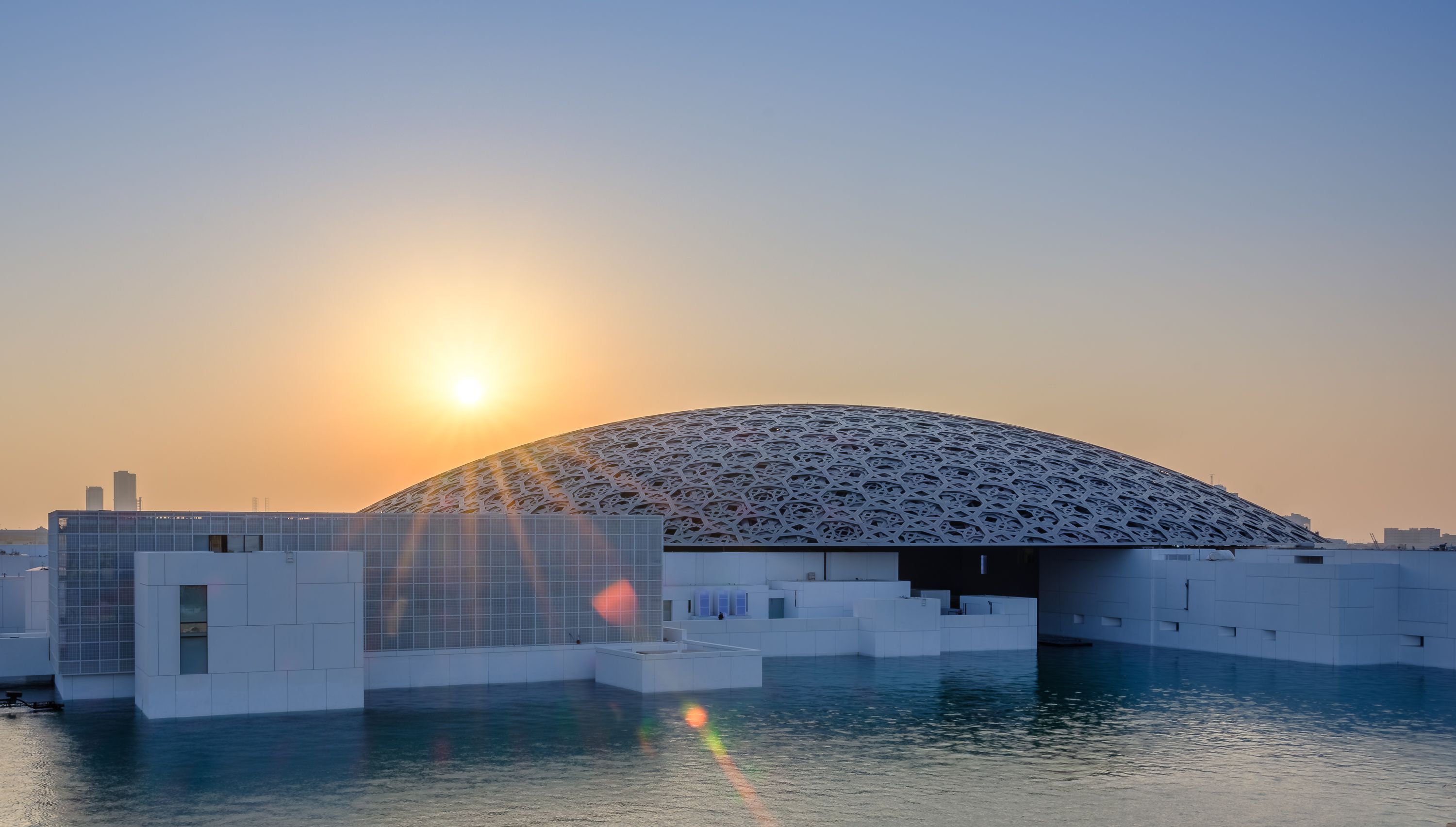 The talks at the Louvre Abu Dhabi symposium were centred around the three broad themes of museum collections, buildings and people Courtesy of Louvre Abu Dhabi - Department of Culture and Tourism Abu Dhabi

Although the talks were centred around the three broad themes of museum collections, buildings and people, there was undoubtedly one overarching subject of discussion: the impact of the Covid-19 pandemic. The symposium offered an insight into how museums worldwide are grappling with the immediate financial and social challenges of the pandemic, but also raised questions about their longer-term future.

The mass closure of cultural institutions under coronavirus restrictions presents an opportunity for museums to “reframe themselves”, said Mariët Westermann, the vice chancellor of NYU Abu Dhabi. “How were they missed when they were gone, and what did they learn about their relevance that can help them be vital, vibrant, and meaningful places?”

For those who missed out on the live Zoom event, the organisers have made recordings of all the sessions available on a dedicated Reframing Museums YouTube channel. Here, we break down some of the key takeaways from the talks.

Exhibitions are not dead, but they will be different

Exhibition formats will need to be rethought but seeing shows in the flesh will be more important than ever in the wake of the coronavirus crisis, said a panel of speakers participating in the roundtable discussion The Future of Exhibitions in a Post-Pandemic World.

Chris Dercon, the president of the Grand Palais in Paris, said that the public is tiring of digital content, which proliferated during the first lockdown. “I think we need museums to have physical encounters not just with the works, but also with other visitors.” He also asked: “Do we continue to upload endless digital content without a system of monetisation?”

But social distancing measures have led to the “collapse” of the Grand Palais’s blockbuster exhibition model, Dercon said; for example, a recent show of archaeological treasures from Pompeii could only receive 210 visitors at any one time.

Hervé Barbaret, the director general of Agence-France Muséums, questioned the relevance of large loan exhibitions. “Can we think about making exhibitions more in relation to permanent collections? Sometimes exhibitions have been criticised because of the blockbuster or entertainment side of them rather how they amplify the richness of the permanent collection,” Barbaret noted. 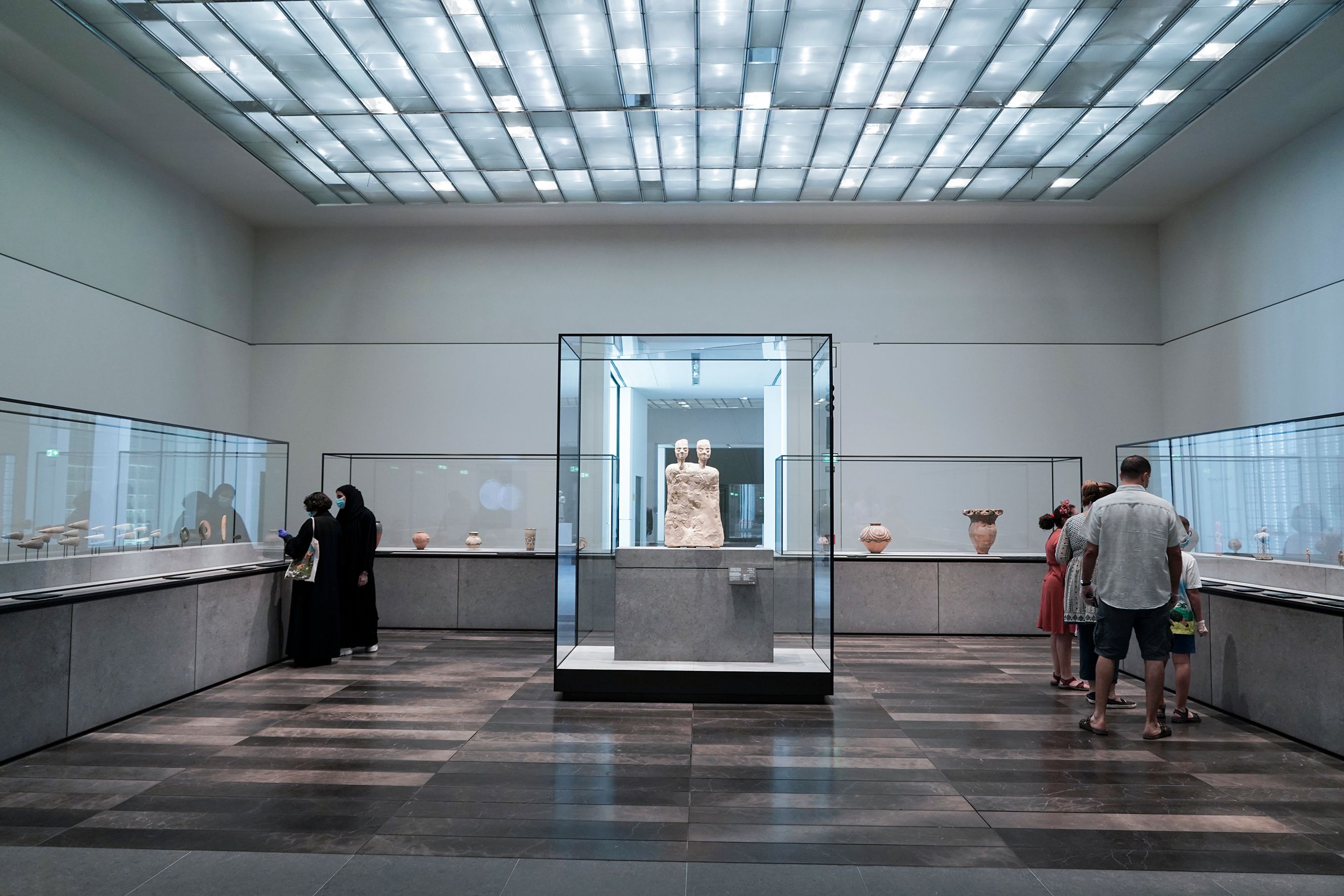 The Louvre Abu Dhabi plans to focus on sharing its collection “with our colleagues from the Emirates and the region” © Department of Culture and Tourism - Abu Dhabi / Photo: Teody Garcia - Gulf Colour

The panel discussion From Acquisition to Storytelling: What Does the Future Hold for Museum Collections? focused on how museums can deploy their permanent holdings for more “flexible” storytelling within their walls and to strengthen partnerships at a local level.

Michael Govan, the director of the Los Angeles County Museum of Art (Lacma), said the Black Lives Matter movement “has touched museums very deeply” because they are “at the intersection of a certain amount of colonialist thinking”. Since the 19th century, Western art collections have reinforced “the Eurocentric point of view of the colonisers”, he noted, but a new generation of curators are calling “not to rethink the museum but tear it down and build it again”.

Govan is quite literally reconstructing Lacma, having demolished 30,000 sq. m of existing galleries to make way for a $750m building project by Peter Zumthor. The redesign will create multiple new narratives for the collection rather than replicating the traditional categories of geography or chronology, he said, describing a more “inclusive” kind of curating. “We have these artefacts and they tell many stories, not just one story. People want to think of museums as somehow objective but they’re not objective at all.”

Sheikha Hoor Al Qasimi, the president and director of the Sharjah Art Foundation, pointed out that the cost of shipping and insuring art is a barrier to non-profit institutions sharing their collections internationally. Govan advocated instead for more local collaborations. “It is inexpensive and very effective to create collection sharing with university museums” in the same region, he said. Lacma is using such a network as “a laboratory for different thinking”.

Souraya Noujaim, the scientific, curatorial and collections management director at Louvre Abu Dhabi, said that the museum is going down the same path, sharing its collection “with our colleagues from the Emirates and the region”. After all, she said, “we don’t own the objects or the history, we just tell part of the story as we see it today”. 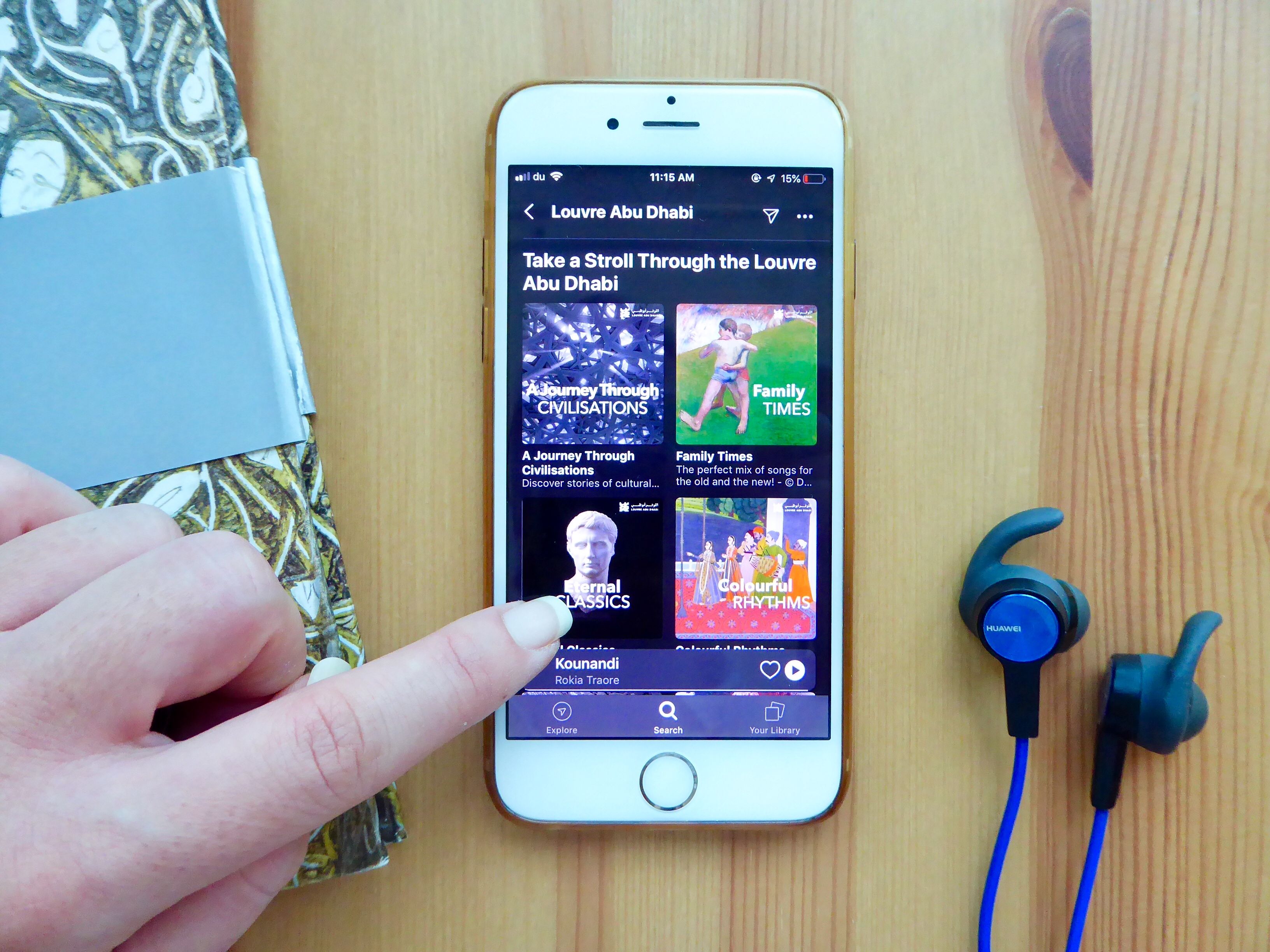 The French tech entrepreneur Frédéric Jousset, a patron of the Louvre, suggested that museums could step up their digital initiatives as a source of revenue LAD x ANGHAMI collaboration © Department of Culture and Tourism - Abu Dhabi

Covid-19 lockdowns have posed a fundamental threat to the revenues of museums, which depend on real-life visitors. The financial strain seems likely continue into the near future as international tourists stay away. The roundtable talk Modelling the Future: New Business Models for Museums asked how non-profit institutions can ensure their viability in the long term.

The Metropolitan Museum of Art in New York has calculated its revenue loss for this year and next at “around $150m”, said the director Max Hollein. The sector worldwide is downsizing in the wake of the pandemic, noted Peter Keller, the director general of the International Council of Museums, citing its online surveys of 49,000 members in 140 countries. A major challenge is to establish “hybrid business models that will enable the development of a sustainable cultural scene”, said Saood Al Hosani, the acting undersecretary of Abu Dhabi’s Department of Culture and Tourism.

“The three pillars—events, sponsorship and ticketing—are not enough,” according to the French tech entrepreneur Frédéric Jousset, a patron of the Louvre, which he says is losing €10m in revenue every month due to the 80% drop in visitors. “The focus on the visitor as the main source of income is a very dangerous one,” agreed Hollein. “It’s much more important to be connected to local audiences, but you [should] also amplify the role you play locally and also internationally as a provider of service, as a provider of experiences and education.”

Jousset suggested that museums could step up their digital initiatives as a source of revenue, rivalling digital art centres such as the Atelier des Lumières in Paris. They could capitalise on their brand and expertise through licensing deals with corporations and the sale of consulting services, he said. There is also potential, he believes, to introduce different tiers of admission fees, just as airlines offer business class for a more luxurious experience. “Pricing models will get more refined, especially though online ticketing,” Hollein said. 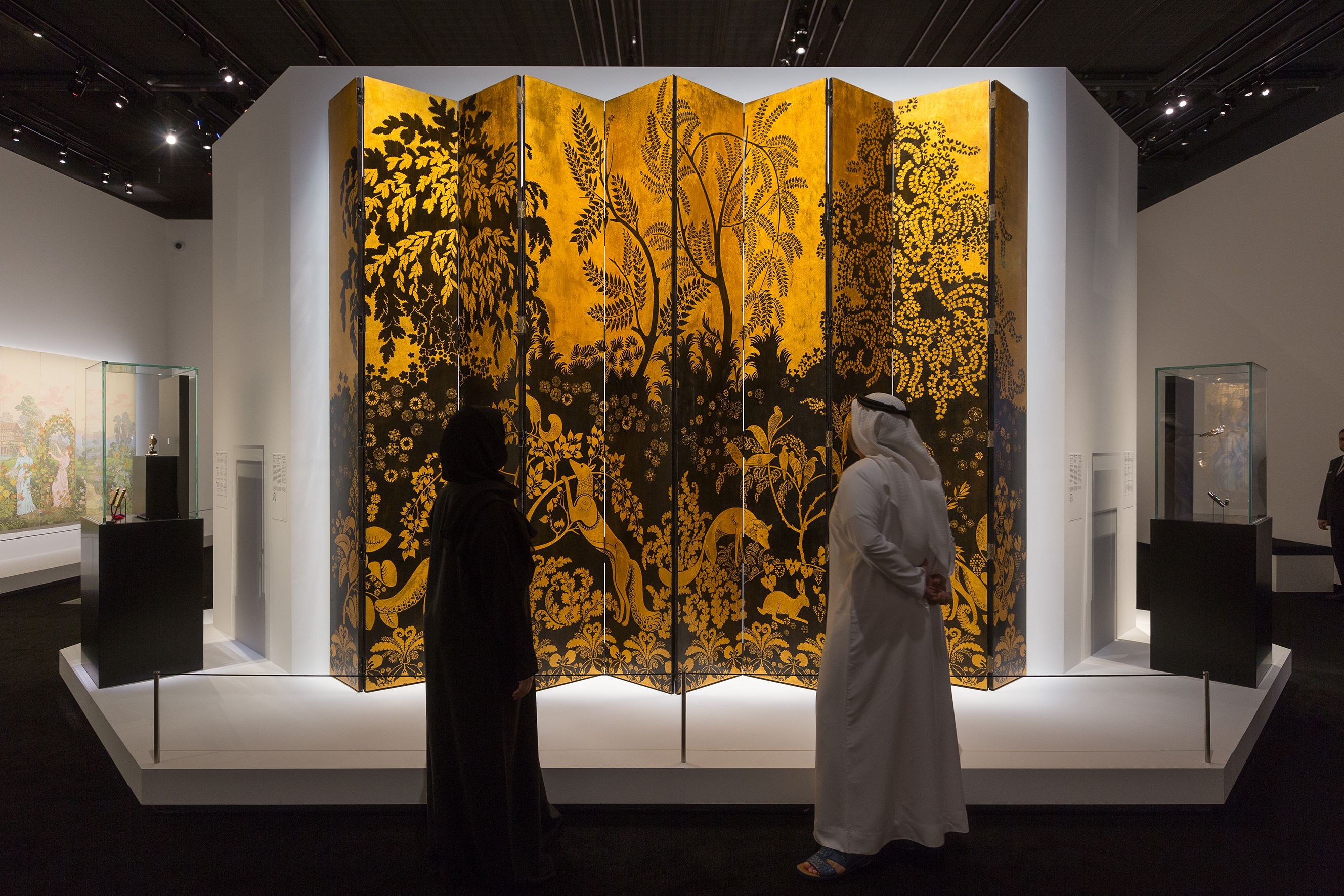 Museums should “rise above class-based distinctions between high and low [culture]” and ultimately “empower audiences” to form their own opinions of, and connections between, the exhibits, says the chief executive and director of the Lucas Museum of Narrative Art, Sandra Jackson-Dumont © Department of Culture and Tourism - Abu Dhabi / Photo: Ismail Noor

Equitable and inclusive institutions must empower their audiences

Several talks raised the issue of diversity and inclusion in museums, which has been the focus of heightened scrutiny in 2020 following global anti-racism protests.

The field has traditionally valued curatorial and scholarly expertise, said Kaywin Feldman, the director of the National Gallery of Art in Washington, DC, speaking in the roundtable discussion Voices of Authority: Expertise, Participation and Inclusion in the Museum of Tomorrow. “We need to recognise the intelligence and dignity of the people we serve,” she said, defending the gallery’s controversial decision to postpone a major Philip Guston exhibition by two years to “take time to listen to our community”. The delay was announced in response to concerns that Guston’s images of hooded Ku Klux Klan figures—intended as a critique of racism—could cause offence. Feldman argued that the works needed to be reinterpreted by the addition of an African-American curator to the project (the show’s four curators are all white).

“We know about Guston’s great intentions, but we can’t disown the fact that 21st-century Americans, particularly African Americans, have their own point of view and reception to the work,” she said at the symposium.

In a keynote speech, the chief executive and director of the Lucas Museum of Narrative Art, Sandra Jackson-Dumont, outlined her vision for a democratic institution that will “rise above class-based distinctions between high and low [culture]” and ultimately “empower audiences” to form their own opinions of, and connections between, the exhibits. “We don’t believe we are just purveyors of knowledge,” she said. “The value lies in discourse and dialogue.”

Jackson-Dumont, the former chair of education at New York’s Met, asks: “Is there a way we can treat work on equity and engagement with the public in same way we treat rigorous approaches to art history?”

Equally, participants in the final panel discussion, The Future of Curators, spoke of the transition towards a culture of curating focused on serving communities rather than the stewardship of collections per se. The public is demanding “parity in representation and storytelling” and greater engagement from museums in “civic discourses”, said Reem Fadda, the director of the Abu Dhabi Cultural Foundation. “The curator has a main role to be that arbiter, to think within the larger public space.”

It is exciting to see the increasing collaboration between curatorial and education departments, said Jessica Morgan, the director of the Dia Art Foundation in New York. “The role [of a curator] has so significantly shifted, we need to look for different qualities, skills, backgrounds,” beyond art-historical knowledge, she suggested.

Art history can be “an important tool to reform the canon”, said Thelma Golden, the director of the Studio Museum in Harlem. Training to be a curator means “equalising the work of speaking to connoisseurs with interpreting to the public—not seeing one as the work of education”.

The Art Newspaper is an official media partner of the Reframing Museums symposium.