As oil prices slump and the pandemic continues to spread, the kingdom's ambitious initiatives are being scaled back 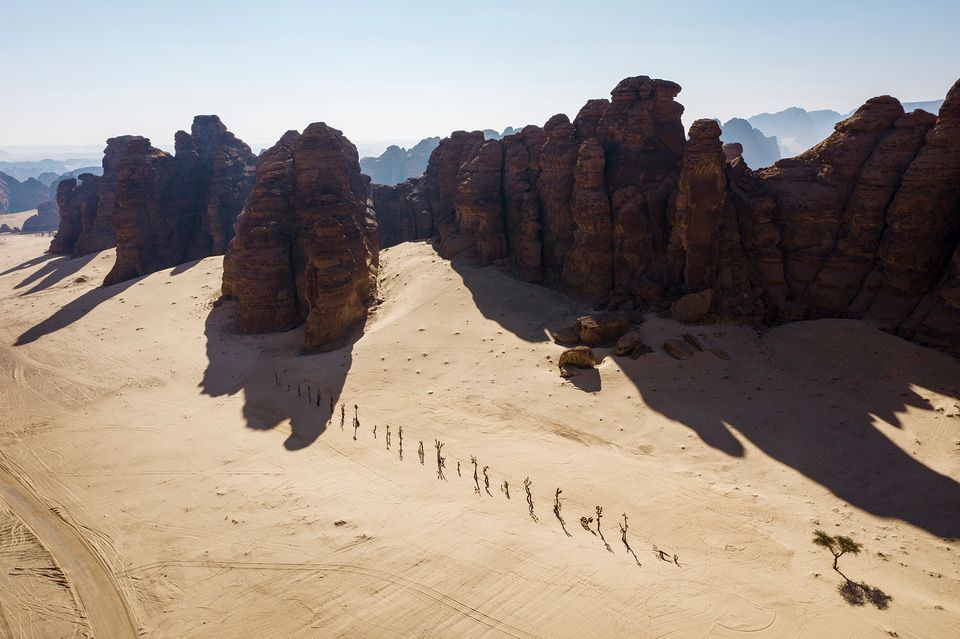 Nadim Karam's On Parade was on show at Desert X AlUla Photo: Lance Gerber. Courtesy of the artist, RCU and Desert X

Desert X Al Ula, the edition of the California biennial sited in the Saudi desert earlier this year, went better than the Saudis expected. Bracing themselves for negative coverage, international outlets led with the exhibition’s spectacular images amidst reports of the burgeoning art scene in one of the world’s most restrictive countries.

It was a victory for Saudi’s development strategy, a mix of local engagement initiatives and big-ticket event culture. The Royal Commission for Al Ula had just completed its second year of the Winter at Tantora festival, for which stars from Mariah Carey to Andrea Bocelli to Rod Stewart had been flown out to the desert—along with, in most cases, their audiences. Projects said to be in the works by the newly created ministry of culture also indicated that art events and tourism would be closely twinned, such as a biennial in Riyadh, an art fair, a large-scale public art programme in Riyadh, and festivals across the country. 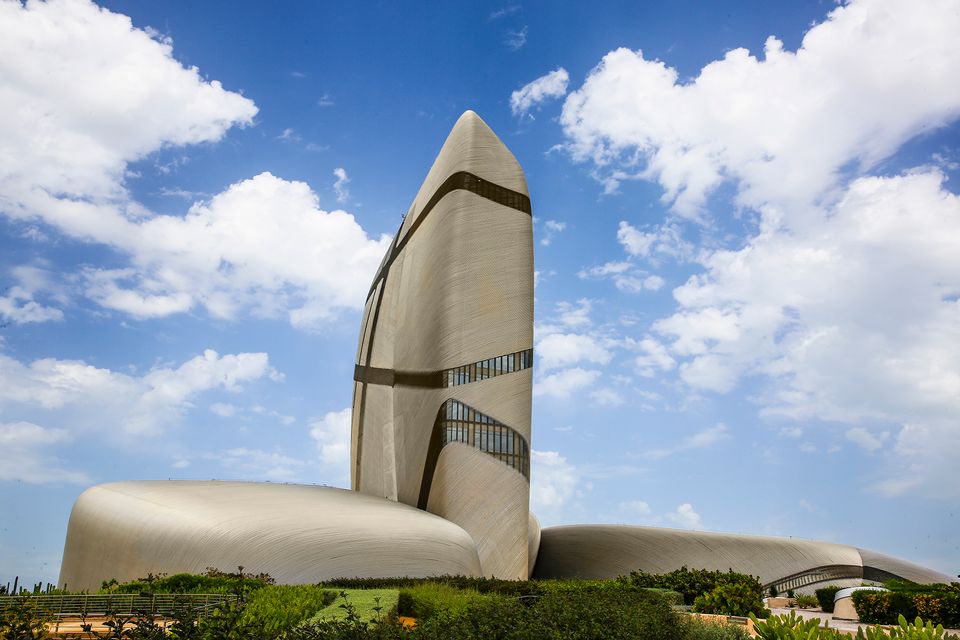 The Ithra museum Courtesy of Ithra

Now, with travel down and social-distancing measures in place, such a reliance on events smacks of pre-coronavirus times. As do the famous Saudi budgets: visitors to Al Ula in February were served lobster in the middle of the desert. Due to a price war and lack of demand, oil has now dropped to around $30 a barrel, down from an average of $65 last year and $70 the year before. The profits of Saudi Aramco, the state oil company, were down 25% in the first quarter of 2020, compared to last year. For a country whose development plans are government-led, the oil slump exacerbates an already complicated Covid-19 picture.

Unsurprisingly, the famously tight-lipped Saudis are reporting that everything is going ahead as planned.

“Ultimately, culture doesn’t stop with Covid-19,” says a spokesperson for the ministry of culture, which has rolled out home-reading initiatives, a virtual gallery of art made in isolation, and a film night to support local producers. Ithra, the Saudi Aramco-sponsored arts centre in the Eastern Province, is digitising its programmes with an eye to keeping up morale, its director Hussain Hanbazazah says, creating a “heat map” that shows the emotions of the country based on accounts submitted online. 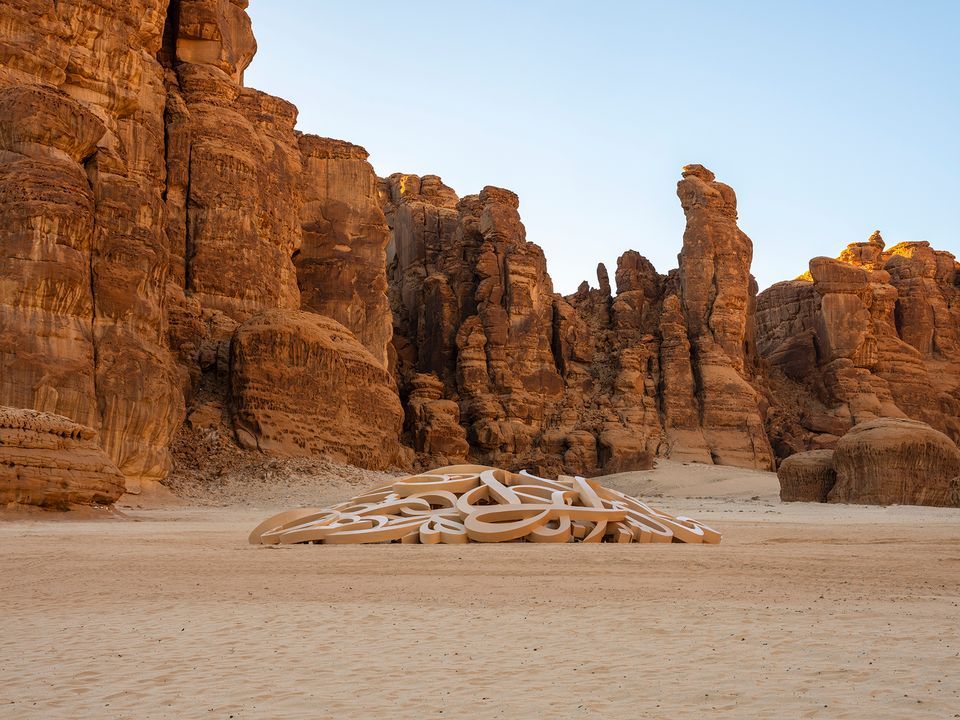 Other sources suggest, however, that multiple ministry of culture programmes are being postponed, and that its focus will shift in the medium-term to domestic rather than international tourism. The ministry, which as of the beginning of the year was employing large numbers of artists, is said to have not yet made any lay-offs, though the effect on the art scene is already beginning to be felt.

“This crisis comes at a very particular moment, when all the promise of the art scene was there,” says Antonia Carver, the director of the Art Jameel foundation, which is building the arts complex Hayy: Creative Hub in Jeddah. “A lot of artists had left their day jobs to devote themselves to their practice, making this moment of pause perhaps all the more challenging.”

Hayy has suffered delays due to the halt in construction, and is now scheduled to open in late 2021. In the meantime, Art Jameel is running a fellowship to train Saudi curators, which it has extended from three months to a year.

“It’s a slim ‘silver lining’, but to have this breather is really important,” Carver adds. “Over the past couple of years there has been a flurry of international interest in Saudi that masks the need for local infrastructure.” 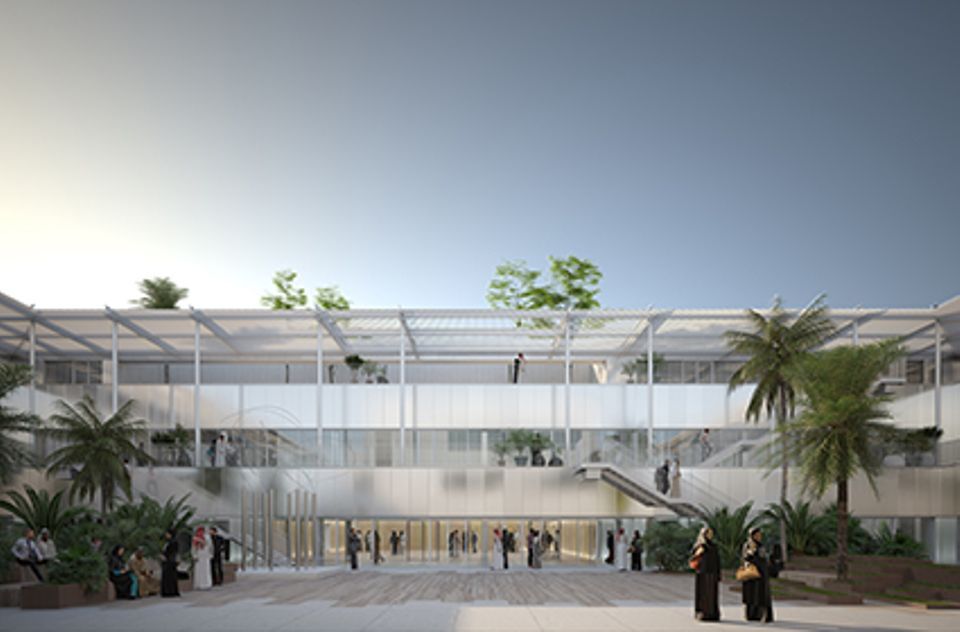 With oil prices as they are, policy will not be shifting to capital projects any time soon. Indeed many expect Saudi to quickly return to events—because of, not despite, the oil slump.

“Putting on a big desert art festival—it’s not cheap, but it's not a billion dollars, and you get a lot of international exposure and goodwill,” says Kate Seelye, vice president for arts and culture at the Middle East Institute in Washington, DC. “I am cautiously optimistic about the art scene. The programmes from Vision 2030 that are most likely going to be cut are the construction projects like Neom and tourist infrastructure on the Red Sea.”

Moreover, Seelye notes, art and entertainment in the kingdom serve a domestic purpose.

“This is the new Saudi social contract, between Crown Prince Mohammed bin Salman and his youth supporters,” she says. “The government realises that its own health and well-being is very dependent on Saudi youth having a good time and forgiving the government for the lack of rights, the lack of real job opportunities, and the lack of any kind of political voice in the country. This is what they get instead.” 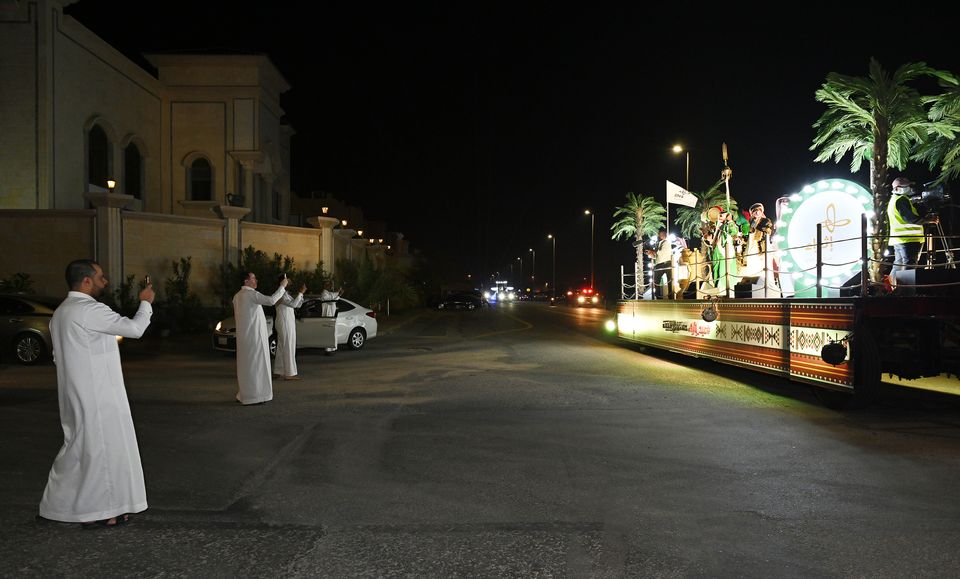 Events are also more palatable to a population and government bureaucracy in the midst of once-in-a-generation social change: it is easier to get approval for a temporary project than a permanent one. Public displays of contemporary art in the kingdom have historically been event-led, particularly before the social reforms initiated by Mohammed bin Salman: from the pop-up exhibitions put together by the collective Edge of Arabia in the early 2010s to the ongoing editions of 21, 39, the yearly exhibition and art week that was launched in Jeddah in 2014.

And now more than ever, Saudi needs to diversify the economy. Desert X Al Ula was only one part of the vast Al Ula development plan, which includes eight museums, a mix of hotels, and leisure offerings such as a horse racecourse and a nature reserve, set to open in 2023. Contemporary art works will be permanently sited in the planned sculpture park of Wadi Al Fann, or Valley of the Arts, where Desert X Al Ula was installed, as well as throughout the museums. A geological museum dedicated to the site’s volcanic basalt residue will incorporate a work exploring the colour black by Anish Kapoor. And as has been recently reported, the Royal Commission also bought one of Yayoi Kusama’s immersive displays, All the Eternal Love I Have for the Pumpkins—a purchase inadvertently in the news because of its broker, the disgraced dealer Inigo Philbrick.

Al Ula’s spokesperson confirmed that Winter at Tantora will begin again in December. Like the art scene overall, there might be delays, but it is unlikely the course will shift.