Trimmed, splashed and slashed: the anatomy of Rembrandt's The Night Watch

As the Rijksmuseum prepares to restore the Dutch master’s most-celebrated painting in full view of the public, we look at its chequered conservation history

The Night Watch Courtesy of the Rijksmuseum

The Night Watch has suffered several indignities in its 377-year history: in 1715, Rembrandt’s large-scale painting was cut down in order to fit a new room when it was transferred from a militia headquarters in Amsterdam to the city’s Town Hall. During the Second World War, the large-scale canvas was rolled up and hidden away in several locations. It has been knifed twice—once in 1911, and then again in 1975, and in 1990, an escaped psychiatric patient sprayed the painting with acid. Yet the Dutch master’s colossal 1642 painting has proudly endured, thanks to the generations of connoisseurs (painter-restorers and later, professional conservators) who have overseen its welfare.

The painting’s iconic status is part of what has made it a target. Its depiction of an ebullient militia company led by Frans Banninck Cocq and Willem van Ruytenburch at the peak of the Dutch Golden Age. Rather than paint a static military portrait of the company, Rembrandt portrayed its members in motion, lending the composition a bravura that still resonates today. The picture is Rembrandt’s largest and most ambitious work.

Art lovers around the world will therefore be watching closely in July when a team of around 20 conservators, scientists and curators embark on an in-depth investigation of the painting, imaging it in three dimensions over several months by harnessing a “huge advance in non-invasive technologies over the past ten years”, says Petria Noble, the head of paintings conservation at the Rijksmuseum, where The Night Watch has been on display since 1808. All processed data will be accessible to the public, free of charge.

“We will not only be able to zoom in to see details on our iPads or computers at a level that was previously only possible with a microscope, we will also have the benefit of the information that new chemical imaging techniques provide—and not just from the surface but also from underlying layers,” she says.

The team will then decide what needs to be done, and the public will watch as experts toil atop hydraulic-lift platforms in a special glass chamber, designed by the French architect Jean-Michel Wilmotte, in the museum’s Gallery of Honour. A digital interface will allow viewers around the globe to follow the process online.

According to Noble, archival records show that the canvas has been treated some 25 times since it was painted, but they do not always state what work was carried out. “It’s a measure of how important the painting was,” she says of the treatments. “As part of the research, we’ll be trying to understand what’s been done to the painting in the past.”

Cut down to size—In 1715, when The Night Watch was cut down, a wide strip was trimmed from the left-hand side as well as smaller strips from the other three edges. Using algorithms and forensic imaging tools, conservators and data scientists will study deformations along the edges of the canvas to help extrapolate the exact width of the removed strips. "Depending on the depth of the deformations it may be possible to figure out how much canvas is missing." Noble says. 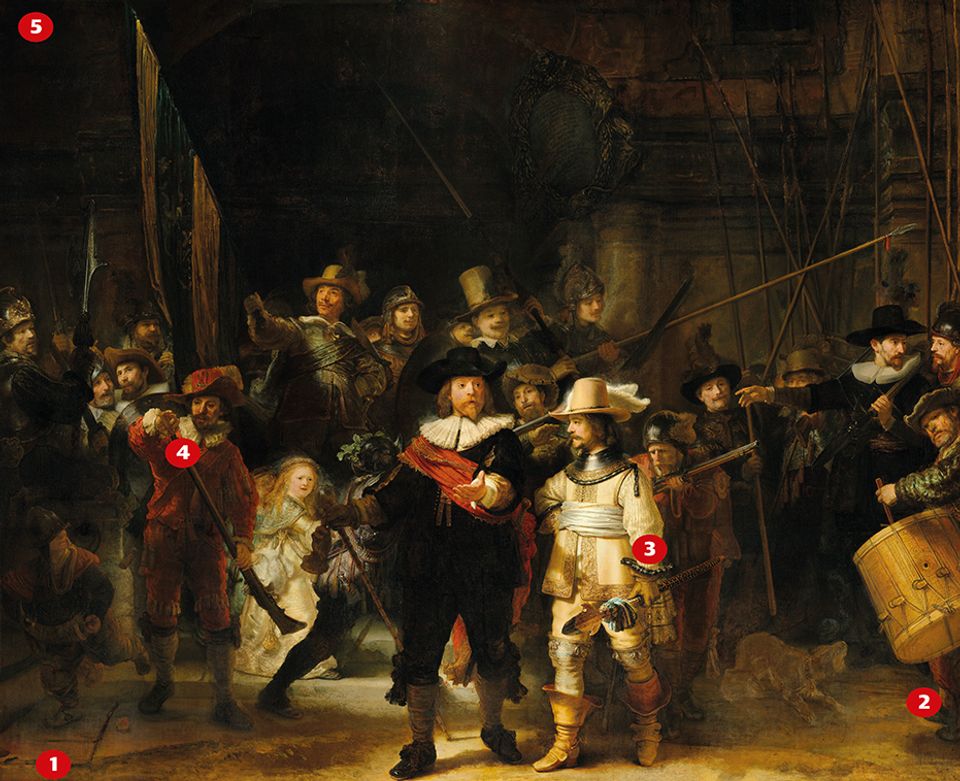 Rembrandt Harmensz van Rijn, Militia Company of District II under the Command of Captain Frans Banninck Cocq, known as the Night Watch (1642) Courtesy of the Rijksmuseum

1. Impact of previous treatments—The Night Watch is thought to have been relined at least four times: in 1975-76, after a knife attack; in 1945, after the canvas returned to the Rijksmuseum from its last wartime hiding place in Maastricht; in 1851 (in the first documented wax-resin lining); in 1795 and, possibly, in 1758. (Relining involves adhering a new canvas on to the back of the original.) A wax-resin lining “impregnates” the painting and can give the paint darker tonality. “We anticipate that relining it again, which is quite an invasive procedure, will not be necessary,” Noble says, but if it is, a synthetic adhesive will be used.

2. Degradation of paint—New imaging techniques, such as macro X-ray florescence imaging—which maps the distribution of chemical elements in the paint on a scale of tens of micrometres—and infrared reflectance imaging spectroscopy, which involves shining a beam of light of specific wavelengths, will be used. The images will then be digitally assembled and registered so the team can understand, for instance, the cause of the blanching, or greyish haze, that appears in areas such as the right foreground with the dog. “We have to understand the cause of the problem before we can decide if anything should be removed,” Noble says.

3. Slashing in 1975—In September 1975 a man with a serrated knife slashed the painting’s two main figures, Captain Frans Banninck Cocq and Lieutenant Willem van Ruytenburch, about a dozen times, leaving gashes measuring several millimetres wide by about 50cm long. Conservators repaired the painting by making “little bridges” using threads dipped in synthetic resin on the back of the canvas before relining it, Nobel says; today those areas on the front of the canvas appear darker and glossier. One option might be to remove the retouches along with the varnish and then to apply new retouches to the damages, along with a new synthetic varnish.

4. Acid attack in 1990—In April 1990, a visitor sprayed acid on the figure of the flamboyant red-clad musketeer in the left foreground. Fortunately, a guard quickly sprayed the painting with water to neutralise the effect. Conservators at the time determined that the acid drips had only penetrated the varnish, not the underlying paint, and so they simply decided to revarnish the canvas. Wielding a digital microscope, which makes it possible to magnify the paint surface up to 7,000 times, today’s conservators will either confirm their predecessors’ diagnosis, or determine if there has been some superficial damage

5. Questions surrounding the stretcher—The weight of the wax-resin and uneven “tensioning” of the canvas has given the painting a kind of “belly”, causing it to bulge slightly in places such as the upper left corner. Conservators will determine whether the tension provided by the current stretcher is adequate and they may consider replacing or modifying it. The current stretcher dates to the last restoration which took place in 1975-76.