As the Getty winds down its decade-long Mosaikon project, it leaves behind a legacy of expertise in a region threatened by looting and political unrest 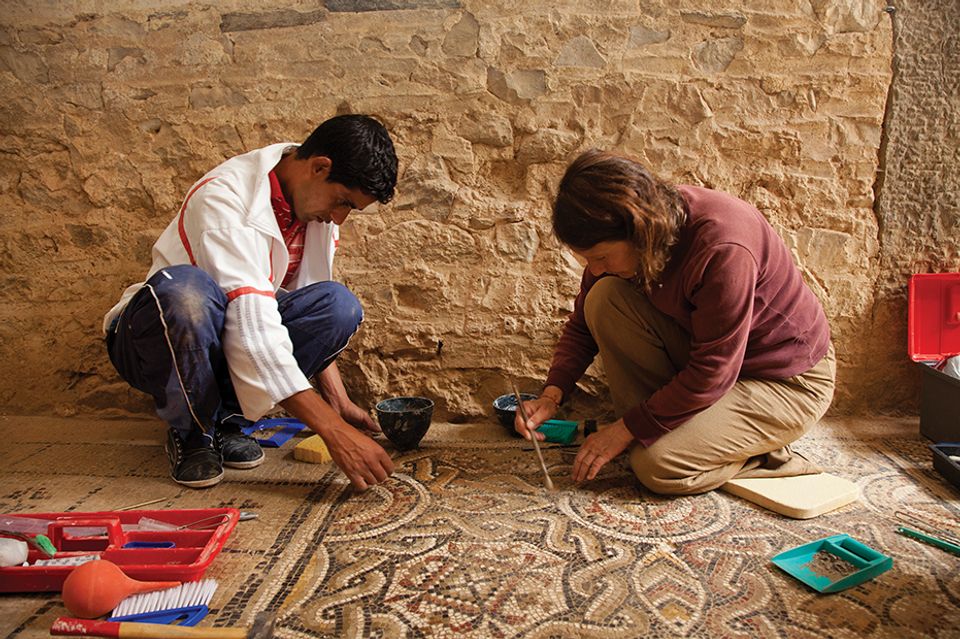 After running a gauntlet of technical and security challenges, the Getty Foundation and Getty Conservation Institute (GCI) are turning the corner in a decade-long project to preserve imperilled ancient mosaics in North Africa and the Middle East.

Known as Mosaikon, the $13m initiative was launched by the Getty in 2008 with the International Committee for the Conservation of Mosaics (ICCM) and the International Centre for the Study of the Preservation and Restoration of Cultural Property (ICCROM). The goal was to shore up a historical legacy threatened by looting, political instability, a lack of funds and limited conservation expertise.

In 11 years, the programme has trained a new generation of conservation technicians across the region who will carry the torch, assuring that ancient mosaics benefit from a canon of best practices for conservation and site management. With the Getty’s support, national mosaic conservation laboratories have opened in Algeria and Lebanon, technical manuals for the region have been translated from English into French and Arabic, and technicians have formed networks through Facebook and WhatsApp to help each other solve vexing problems.

The project was born out of a longstanding effort by the GCI to train mosaic conservation technicians and archaeological site managers in Tunisia, including Bulla Regia, which was a wealthy city in the Roman era. The fruits of the effort, which involved plotting the future of some 400 captivating mosaics at Bulla Regia damaged by wind, rain, vegetation and tourist traffic, galvanised the Getty to propose a broader regional mission.

“There wasn’t a complete lack of expertise, but I think in many places in the region there wasn’t a critical mass,” says Jeanne Marie Teutonico, associate director of the GCI. And the scattered mosaic technicians and heritage site managers in the Middle East and North Africa needed opportunities to confer with one another, according to Joan Weinstein, director of the Getty Foundation. 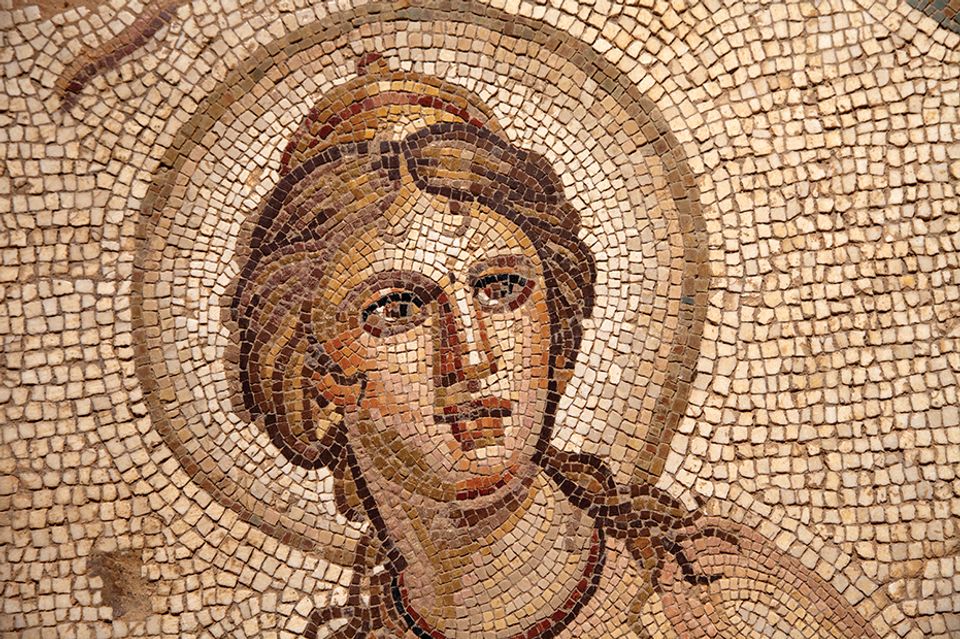 Early on, the GCI and the Getty Foundation decided to focus on separate but parallel tracks: the institute would train conservators and site managers for mosaics that remain at their original locations, and the foundation would award grants for teaching conservators to treat mosaics that had been lifted and transferred to museums. In most cases, the trainees they sought were government employees, recruited on the assumption that they would be paid for their efforts going forward and would stay in place long enough to pass along their expertise to other colleagues.

Modern conservation policy dictates that mosaics be maintained at their original sites to enrich their meaning and context, but scores have long since been relocated to museums and urgently need treatment, says Roberto Nardi, the president of ICCM, who has overseen the training of conservation technicians handling lifted mosaics.

One of the biggest problems facing restorers is the widespread use of cheap reinforced concrete as a backing for mosaics, a technique that broadly took hold after the Second World War and remained dominant until the 1980s. Iron within the concrete corrodes and expands, rising to the surface and threatening the weave of stone, glass, ceramic pieces or shells that make up the mosaic’s tesserae (tiles). “It’s a huge mistake that was made,” says Nardi, who also heads the Centro di Conservazione Archeologica, a private restoration firm in Rome that has been funded by Mosaikon. “It’s a kind of nightmare.”

Thomas Roby, a senior project specialist for the GCI who has led months-long training sessions of budding technicians throughout the region, says that a recent conservation strategy is to painstakingly remove the reinforced concrete backing and then lay the mosaic on a new lime mortar bedding imitating the original Roman mortar layers.

Introduction to the various types of lime mortars is a crucial part of the conservation technician's training. “They’re taught how to formulate a mortar that’s appropriate for the particular operation, whether it’s resetting of tesserae, filling an area of loss or grouting underneath the layers of the mosaic,” Roby says. They will also learn how to inject a liquid mortar below the layer of tesserae to re-adhere it to the bedding mortar beneath it.

At the Getty in Los Angeles, mosaic conservators may prefer to use a light but sturdy product such as honeycomb aluminium panels to reback mosaics, Teutonico says. “But sometimes in these other countries you can’t get it, or you can get it but it’s too expensive. So it’s not a sustainable technique.” She says the GCI is conducting research into affordable lime-based mortars—delving, for example, into the use of brick dust and pozzolana, a type of volcanic ash.

The trainees are also schooled in reburying mosaics that are threatened by the elements but are off the beaten path for tourists and would benefit from being covered. This generally involves covering a stabilised mosaic with a layer of sand and then a layer of gravel to hold the sand in place and discourage the growth of vegetation. 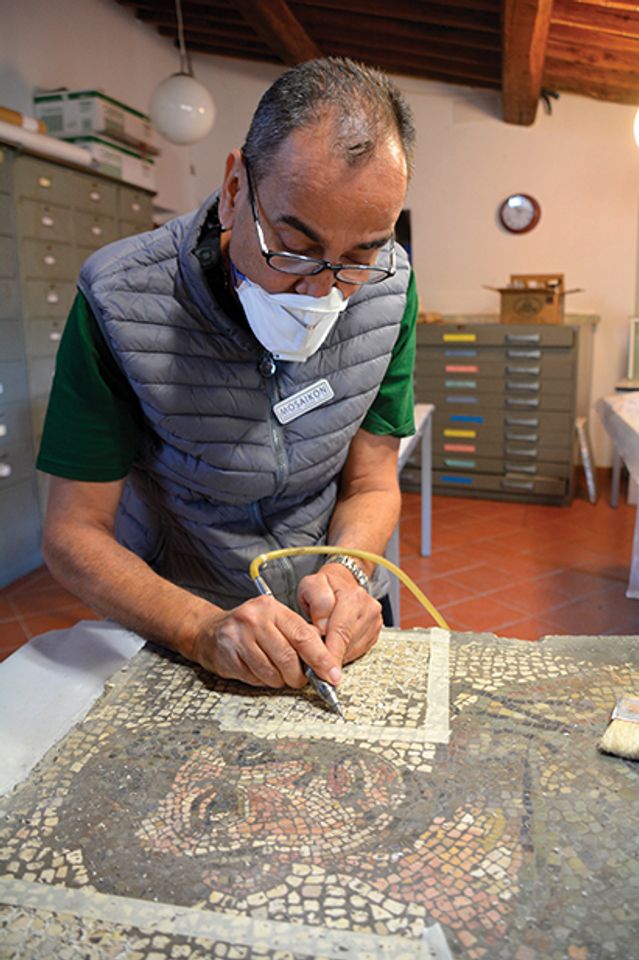 Many practitioners in North Africa and the Middle East used to take detached mosaic pieces (tesserae) and reset them in the places from which they were conjectured to be from originally, but that is no longer standard practice in the conservation field, Roby says. “We have them replace areas of loss with mortar that blends in aesthetically with the surrounding area,” he explains, “but not put back tesserae when you don’t know where their original position was.”

Managers of archaeological sites—usually government archaeologists or architects—have also benefited from GCI training, says Leslie Friedman, a project specialist for the institute. At home they often contend with looting, limited budgets and personnel, flooding and vegetation growth. After a year and a half of training for groups of 20 to 30 site managers in areas like mosaic reburial and recruiting local stakeholders, they are mentored by the GCI as they deal with real-life scenarios. They have also shared their problems at colloquia in Rome and at the ancient site of Herculaneum. To get a sense of perspective, “they can also see that in Italy they have just as many problems, if sometimes not more, than they have at their own sites,” Friedman says.

To date, the Getty says, 235 conservation technicians and site managers from 17 countries have been schooled through Mosaikon. (Some sessions have been expanded to include Balkan countries.)

Political unrest and logistical barriers have long bedevilled the project. In 2011, for example, Nardi organised an ambitious training session at the Citadel of Damascus, a Unesco World Heritage site, focusing on a large lifted mosaic there. But street protests associated with the Arab Spring democracy movement had turned menacing, prompting organisers to fear for the conservation technicians’ safety. Nardi and the Getty Foundation put the course on hold and then transferred it to Belmonte, a site outside Rome. The Syrian trainees travelled overground from Damascus to Beirut, picked up Italian visas there and then flew to Italy, Weinstein says.

“There was, of course, a moment when we said: ‘Can we continue under these circumstances?’ I’m so glad we stayed the course,” she says. The Rome sessions, which involved working on concrete-backed lifted mosaics from the Museo delle Terme, proved to be highly successful, with many trainees returning for subsequent course modules and even mastering English in classes provided at the site.

“There was, of course, a moment when we said: ‘Can we continue under these circumstances?’ I’m so glad we stayed the course.”

By the end of 2011, Syria was immersed in full civil war, but a stalwart group of Mosaikon trainees has maintained its efforts—repairing collapsed mosaics at the Umayyad Mosque in Damascus, for example, after missile strikes in 2013, according to Aicha Ben Abed, a regional project coordinator based in Tunis. “Our group there is really active—it’s one of the pillars of conservation in Syria,” she adds. Still, US sanctions against the Syrian government have occasionally hobbled Mosaikon, which was blocked from supporting the Syrians’ attendance at an ICCM meeting in Barcelona in 2017.

The programme has also faced a “traumatic” situation in Libya, where mosaic workshops funded by the Getty Foundation took place in Sabratha in 2012 and 2013 but have since became untenable because of the violence waged by competing factions, Teutonico notes.

For success stories, organisers point to the well-equipped national mosaic laboratories founded by Mosaikon trainees in Algeria and Lebanon with funds from the two national governments and from recently recruited grant-making institutions as well as the Getty Foundation. (Mosaikon has also schooled participants in writing grant applications.) Weinstein and Ben Abed cite the growing involvement of the various governments’ antiquities directors, who attend regional colloquia and increasingly see themselves as having a stake in mosaic conservation. “If you don’t convince the high level of authorities in the country, you can’t do much,” Ben Abed says.

Yet as Mosaikon prepares to wind down in 2020, its most potent legacy is clearly the wealth of expertise of the 200-plus conservation technicians and site managers who have passed through the programme and who doggedly stay in touch online.

“Today, we have a huge pool of conservators who can do this work,” Nardi says. “Now the wheel will never stop.”