Recent demonstrations break a long-held taboo–criticism of the Thai monarchy, an institution which protesters believe is the main obstruction to democracy 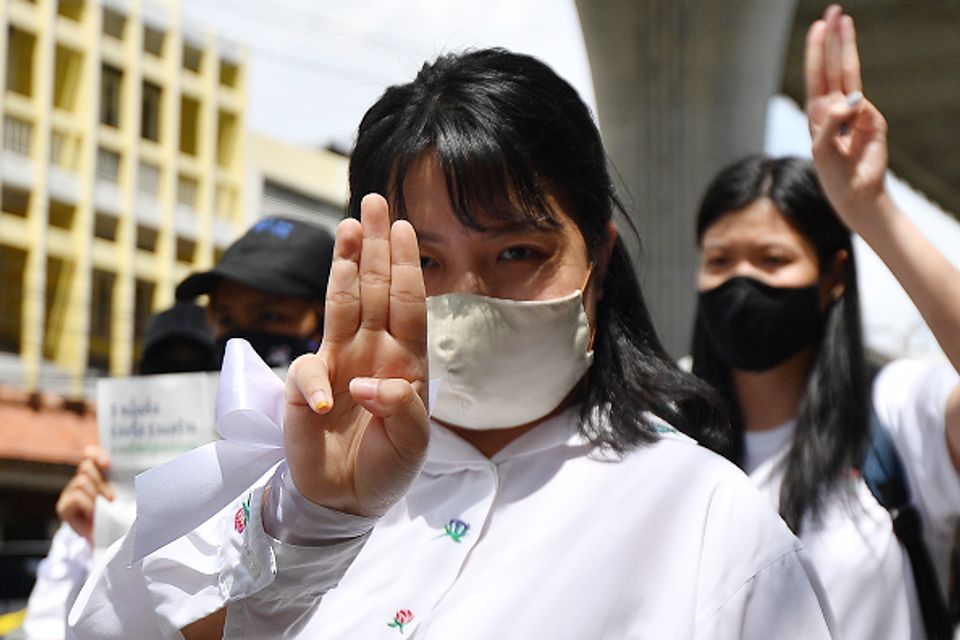 Thai artists and art students are on the frontline of their country’s swelling pro-democracy movement, calling for reforms of Thailand’s military-backed government, and breaking both taboo and national law to criticise the nation’s monarchy. The near-daily flash mobs numbering in the thousands, mostly of middle school students waving white ribbons and holding up a three-finger salute from the film The Hunger Games, reached a crescendo on 19 and 20 September, when upwards of 100,000 people of all ages turned out on the anniversary of the 2006 military coup deposing the populist prime minister Thaksin Shinawatra.

On 12 September, according to the activist artist Mit Jai Inn, around 2,000 art students held a flash occupation at the state-backed Bangkok Art and Culture Centre to protest against elitism in the art world. “For the past five to seven years, the [established] artists have mostly aligned with the military and monarchy because of the [perception] of the resistance—the poor, the red shirts—so they align with the yellow conservatives and the military,” Mit says.

“Before I was a lonely minority, but now all of the young artists have turned radical” Mit Jai Inn, activist and artist

“In Thailand, the art scene is run by elite old men, nearly all conservative. Before I was a lonely minority, but now all of the young artists have turned radical,” joining protests “doing art, performing music, designing posters.”

Alongside the Free Youth group organising the protests, a Free Art alliance has been coordinating pro-democracy artists around the country. “It is not an organisation—more like outlaws,” Mit says.

A general strike is planned for 14 October, the anniversary of the 1973 military killings of around a hundred protesters that led to the reinstatement of parliamentary democracy for three years.

Since 1932, when a coup that ended the monarchy’s absolute rule, “there have been countless government coups. Most recently in 2014—every time they say it will not happen again,” says Apinan Poshyananda, artistic director of the privately backed Bangkok Art Biennale (BAB).

Thailand’s last wave of protests in 2010, by mostly rural and poor “red shirts” supporting Thaksin, culminated in a military massacre of over a hundred people. “The difference now is that there are more kids, more students—14 and 15-year-old kids. It is good; they have learned about democracy and want to see their own future, see what the government will be like for the next 20 years.”

“Thai artists always get involved in political protests—ever since the early days of democracy. They help by making political posters, designing state backdrops, writing political poems, singing protest songs,” says Manit Sriwanichpoom, the artist founder of Bangkok’s Kathmandu Photo Gallery. Members of the musical alliance Rap Against Dictatorship, including Dechathorn Bumrungmuang, aka Hockhacker, and Thanayut Na Ayutthaya, aka Eleven Finger, have been detained and released. “The previous protests were for and against corrupt politicians— Thaksin Shinawatra and his cronies. Democracy was used to legitimise the movement. The ultimate goal of the protests today is to reform the Thai monarchy, which protesters believe is the core element obstructing the development of the country’s democracy.”

Sriwanichpoom says their ten demands to curb the king’s constitutional powers ask that the monarchy be constricted into a symbolic rather than the current supreme and sacrosanct political and economic role, “like the Japanese or European monarchies, and to defend the democracy from coup d’etats”.

“Before this current wave of protests, criticising the Thai monarchy was strictly taboo”

Thailand’s monarchy is theoretically regulated under the current constitution, promulgated by the military regime last year, alongside contested elections that barred main opposition party Future Forward and installed Chan-ocha as prime minister. Some pro-democracy leaders living in exile have been kidnapped, and the bodies of several were later found brutally disfigured. The disappearance of Wanchalearm Satsaksit from Cambodia in July sparked the current wave of protests. “But in real life, the Thai king has the highest power in the country,” says Sriwanichpoom. “The king can do no wrong.”

Before this current wave of protests, criticising the Thai monarchy was strictly taboo. Any criticism of the institution is subject to lèse-majesté rules that can include a 15-year prison term and a life-long blacklist, while any calls to abolish the monarchy are punishable by death. “The administration, military, the circle around the monarchy, the courts—they are like a politburo,” says Mit. “The king says he’s neutral, but he has an alliance with the military, and gives advantages and monopolies to big industry. Along with the police and the military, they are like pirates, with black money. It has been more than 14 years since Thaksin was taken out, and the gap between rich and poor gets more wide.”

Mit, born in 1960, co-founded the still-active Chiang Mai Social Installation Project alongside the 1992 protests that ushered in Thailand’s most democratic period. In 2015, he opened the Cartel Artspace in Bangkok, a project space that is no stranger to censorship raids for art deemed too controversial on political or religious grounds for the mostly Buddhist country, or simply made by artists on a lèse-majesté blacklist.

“The censorship on film is still hard and controlled, but other media are relatively free—except [when it comes to] criticising the Thai monarchy. By nature, Thai people are anarchists; they are free people (Thai means freeman) who don’t like any restrictions” on their expression, says Sriwanichpoom. “Art still has an important role to play in the fight for democracy.”