Livestreamed auctions make gameshows of art, but where is the glamour?

Christie's and Sotheby's have rapidly adapted to 'bricks and clicks' sales, but they will need to do more to attract top-notch consignments and the experience-hungry generation 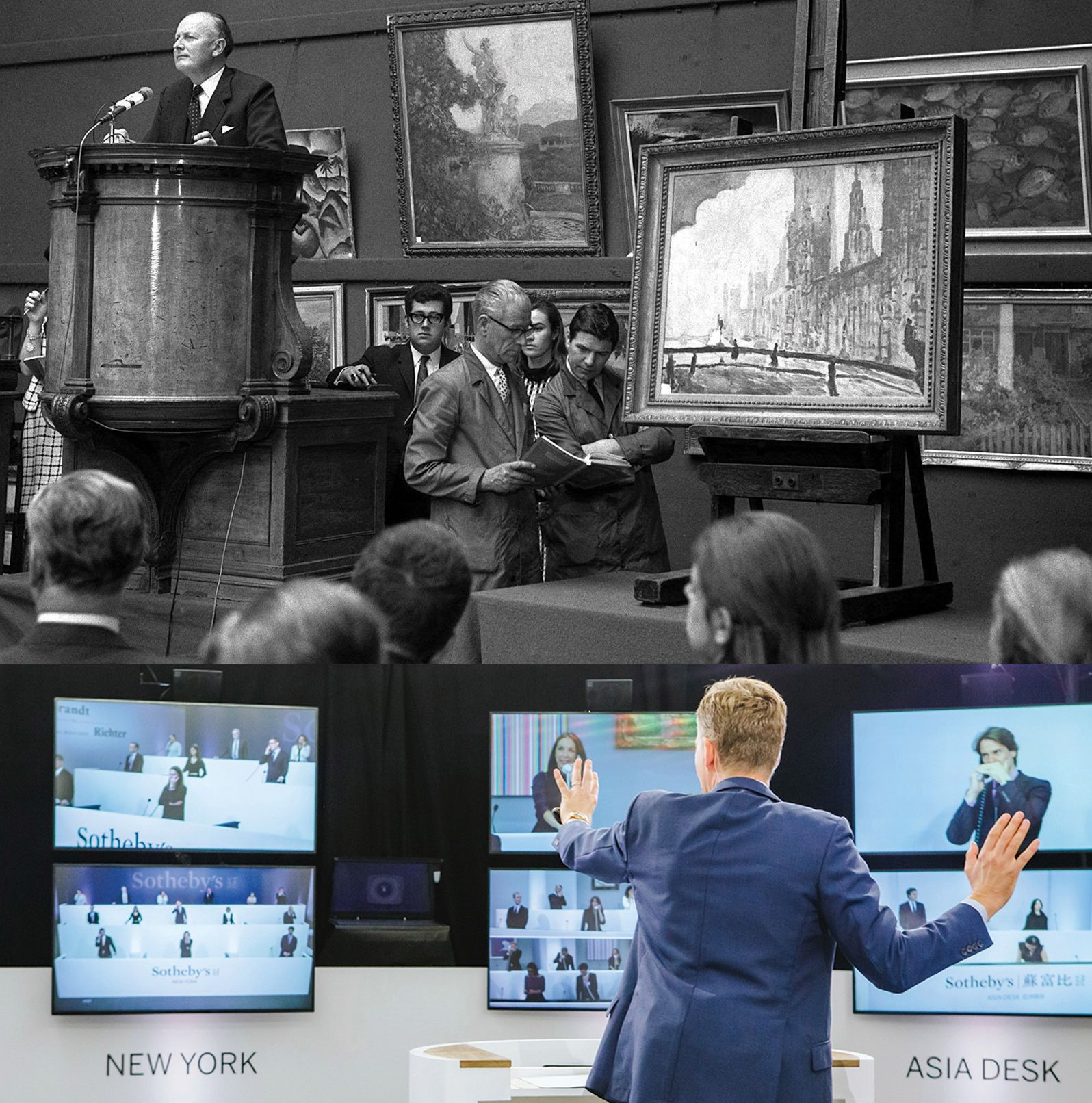 Sotheby’s then and now: Peter Wilson on the rostrum in 1968, and the livestreamed Rembrandt to Richter auction in July. Top: PA Images/Alamy Stock Photo. Bottom: Courtesy of Sotheby’s.

“See it on the split screens—the future of auctioneering,” pronounced Oliver Barker, Sotheby’s sharp-suited chairman, Europe, and master of digitalised ceremonies as he opened the company’s livestreamed £150m Rembrandt to Richter sale in London in July.

Watched by an online audience of 150,000, this was the second of Sotheby’s new “multi-camera global livestream” evening sales, featuring an auctioneer alone in a hi-tech control room, taking digitally beamed bids from colleagues and clients around the world.

Thanks to the rapid virtual shift necessitated by the Covid-19 crisis, major auctions at Sotheby’s, Christie’s and Phillips have gone online. But, lacking the glitz and sense of occasion of an in-person sale, this is not the most appealing context for collectors to sell their most valuable works. So auction houses have had to create more glamorous “bricks and clicks” cross-category evening events in order to attract big-ticket consignments.

"The whole art world is event-based. It needs to find new ways of doing this, otherwise it just becomes a retail space.” Anders Petterson, the founder of the research company ArtTactic

In July, Christie’s held its technologically clunky $420.9m One sale of 20th and 21st century art, livestreamed in a relay across Hong Kong, Paris, London and New York. Phillips weighed in with its own multi-camera Modern and contemporary art sale, which grossed $41.1m. Totals at these digital evening sales have typically been about 50% down on their previous “real life” equivalents—not bad as a short term solution, but very damaging if it becomes a lasting trend.

Thus far, Sotheby’s, owned by the French-Israeli telecoms magnate Patrick Drahi, has come up with the most compelling formula. Its two TV game show-style livestream evening auctions in June and July, slickly made by London-based Chrome Productions, raised a combined $556m.

“Sotheby’s has raised the bar for these sales,” says Anders Petterson, the founder of the research company ArtTactic. “It could become a standard format. A London auction with a global presence. The whole art world is event-based. It needs to find new ways of doing this, otherwise it just becomes a retail space.” 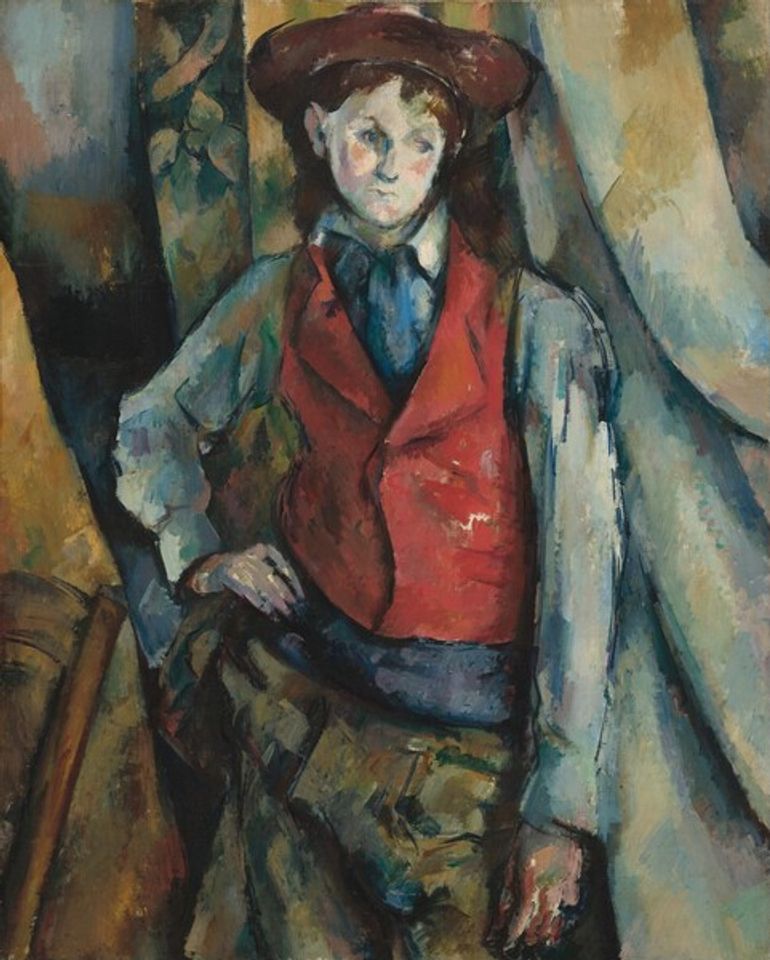 Livestreamed evening auctions are clearly a significant innovation. But what, exactly, do they signify? To get some kind of perspective, it’s worth looking back to 1958, when Sotheby’s last invented the future of auctioneering.

Back then, Sotheby’s recently-appointed chairman Peter Wilson came up with the formula of the “black-tie” evening sale with its seven-lot auction in London of Impressionist and Post-Impressionist masterworks from the collection of the New York banker Jakob Goldschmidt.

Thanks to Wilson’s astute marketing, the niche world of fine art auctioneering became (as the Western Mail put it) “like a Covent Garden great occasion”. Celebrities such as the ballerina Dame Margot Fonteyn and Hollywood stars Anthony Quinn and Kirk Douglas were in the 1,400-strong audience. Television crews at the back of the room filmed Wilson, with a cut-glass Eton and Oxford accent, hammer down Cézanne’s Boy in a Red Waistcoat (1888-90) to the American collector Paul Mellon for £220,000, more than five times the previous record for any work at auction.

The sale of that Cézanne “staggered the world”, commented Gerald Reitlinger in his landmark 1961 study, The Economics of Taste, sparking a boom in the market for Impressionist and Modern art that lasted until 1991.

"Traditional auction house structures, organised into specialist departments, are increasingly evolving towards ones which combine different sales channels” Thierry Ehrmann, the chief executive and founder of the Artprice database

Sotheby’s Rembrandt to Richter sale, by contrast, took place in the middle of a pandemic-induced financial crisis. The 1958 Goldschmidt sale lasted 25 minutes, while the 2020 livestream was three hours. Wilson was selling museum-quality masterpieces at the beginning of a market cycle; Barker was selling less exceptional art at the end of one. Wilson had stars of the silver screen in front of him; Barker had computer screens.

“The ‘bricks and clicks’ strategy should continue to be the best solution in the short and medium terms,” says Thierry Ehrmann, the chief executive and founder of the Artprice database. “Air traffic should not regain all its vitality for several more years and the digital transition of the art market is not quite over.”

According to Ehrmann, the auction houses’ “traditional horizontal structure, organised into specialist departments, is increasingly evolving towards a vertical structure which promotes innovative marketing strategies and combines different sales channels”.

Which means luxury retail—visit Phillips’s website and you are only a few clicks away from being able to buy a Rolex Cosmograph Daytona watch for £79,950.

On 28 September, Sotheby’s will “reach further into the retail sphere” by opening a new showroom in its Bond Street building devoted to collaborations with “tastemakers” and artists, as well as to displaying jewellery, watches, art and design for “immediate purchase”. The launch is part of a “wider, on-going expansion of Sotheby’s retail capabilities”, exemplified by the company opening a gallery in the Hamptons. Visit sothebys.com, and not only can you immediately purchase watches and discounted antiques (at Sotheby’s Home), you can even chat online to a personal luxury shopper.

Christie’s website offers little in the way of immediate retail gratification, which is curious given that it pioneered online-only handbag sales and is owned by Francois Pinault, the founder of the luxury group Kering. But it may be only a matter of time.

In 2019, the global personal luxury market, encompassing both goods and experiences, was worth an estimated $1.5 trillion, more than 20 times the estimated value of global art sales. A shift from low--profit auctioneering to high-profit luxury retailing would seem a smart, forward-thinking move.

There is just one snag. Consumers under the age of 40 are not buying into the culture of possession. The Instagram generation, market research tells us, wants the experiences, but not the goods.

In response, top luxury brands are now marketing their wares through “curated experiences”. At the end of August, the peripatetic Prada Mode club held an exclusive “site-specific intervention” in a historic mansion in Shanghai devised by the Chinese film director Jia Zhangke. Around 2,000 VIP members experienced a bespoke evening of films, discussions, dining, drinking and themed dancing. A further 200,000 watched the event livestreamed via Prada’s WeChat channel.

“Auction houses will need to rethink their value creation model and think more in terms of creating unforgettable experiences rather than transactionally selling items,” says Daniel Langer, the chief executive of the luxury strategy consultancy Équité. “Efforts need to be dramatically extended in order to stay relevant for highly discerning, digitally native and experience-seeking customers. Auction houses that continue following a traditional model won’t make it.”

In the absence of live auctions and big art fairs, Sotheby’s, Christie’s and Phillips’s hi-tech mutations of Wilson’s original 1958 “black-tie” occasion are pretty much the only bit of the art market that a wider world now sees.

These carefully choreographed events create the illusion the art market is still “booming,” but the auction houses are under financial pressure. Costs are being cut, staff laid off, fees raised. On 21 September, Christie’s quietly raised its buyer’s premium for the fourth time in as many years, charging extra for its three main price levels. On 1 August, Sotheby’s introduced a new “overhead premium” of 1% of the hammer price, in addition to its existing buyer fees. 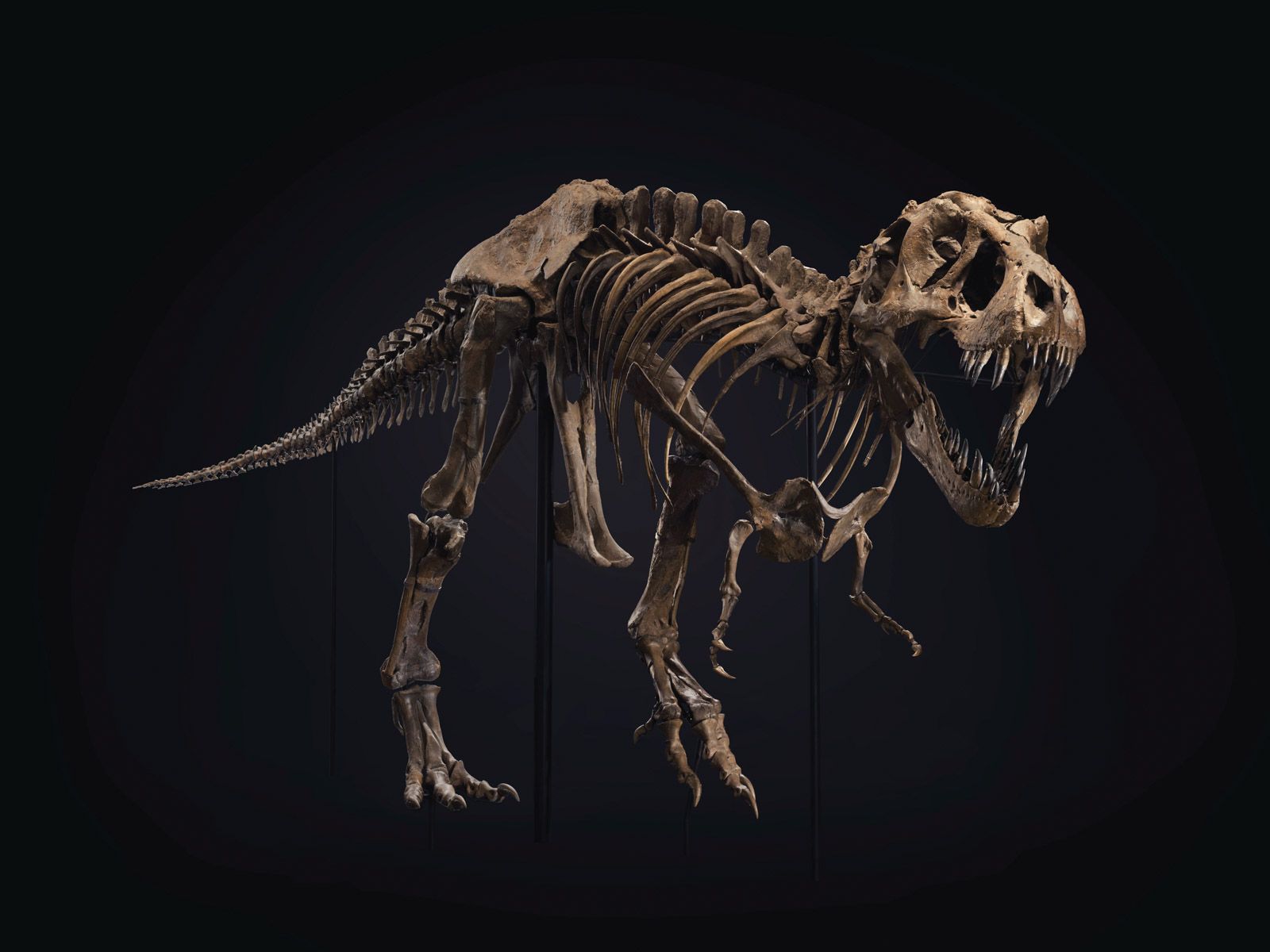 On 6 October, bizarrely, Christie’s will be offering a Tyrannosaurus rex skeleton, estimated at $6m to $8m, along with a $25m Cezanne watercolour at its evening auction of 20th and 21st century art, livestreamed from New York. Meanwhile on 21 October, Sotheby’s will hold a livestreamed relay auction from London and New York. An early 1960s black and white Bridget Riley painting will be a highlight here, estimated at £5.5m to £6.5m. A monumental 1982 Georg Baselitz Last Self-Portrait, valued at £4.5m, will lead Phillips’s 20 October hybrid online and in-person sale of 20th-century and contemporary art in London.

Will watching these auctions online be an unforgettable experience? For art market addicts, they will, of course, be required viewing. But for the rest of world, once the novelty wears off (which it does tend to do after a couple of hours and the T-rex is sold), the sight of an auctioneer on a screen trying to coax yet another multimillion-dollar bid from a colleague on a telephone on a screen for yet another Fontana or Warhol on a screen can be a powerful reminder that we really need to get out more.

This is the problem facing mission control in a digitalised auction world. It needs a Kirk Douglas.