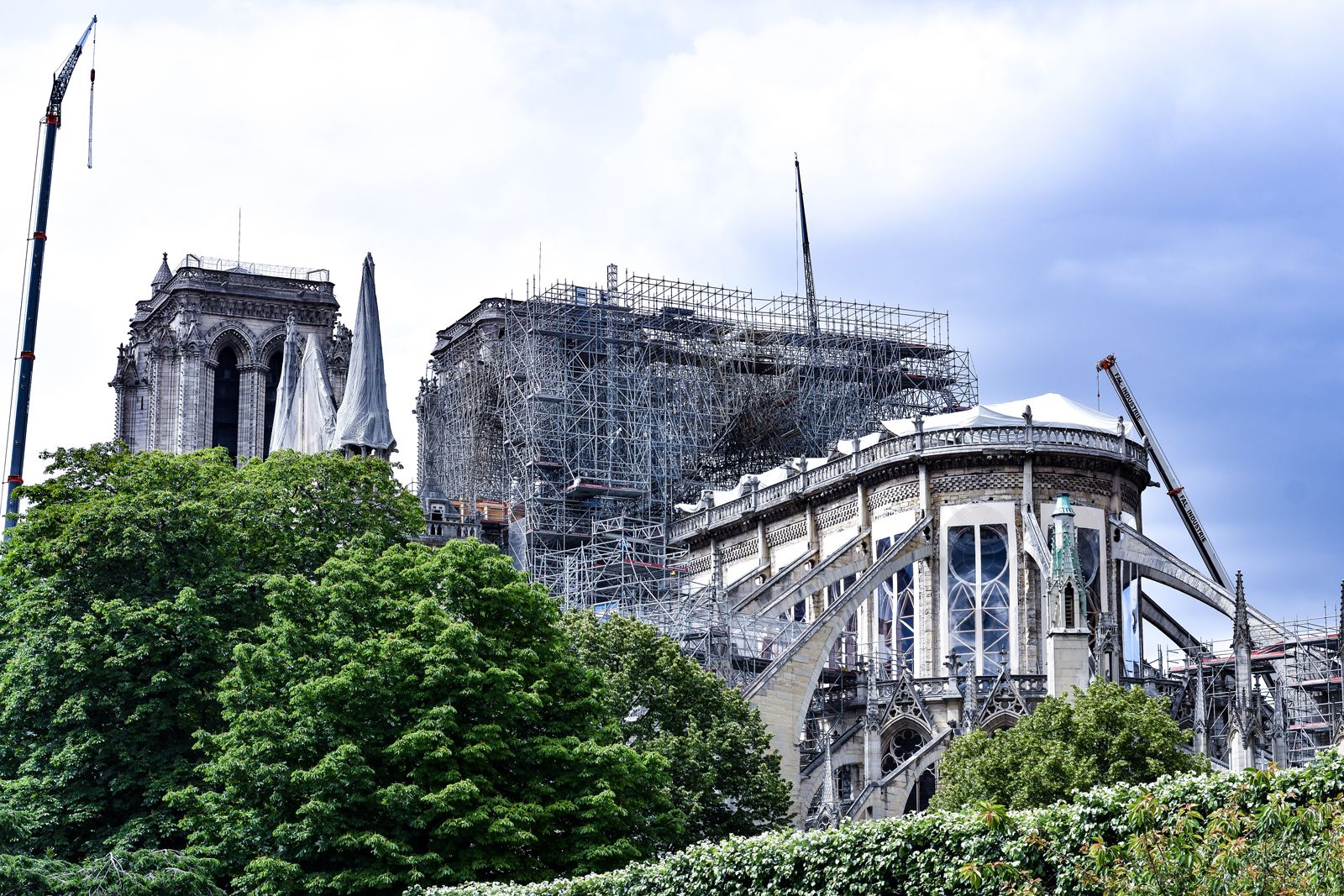 The way ahead for the restoration of Notre Dame is much clearer now after the 15-month long discussions have ended with a decision to rebuild the roof and spire as they were before the fire of 15 April 2019, rather than hazard a contemporary architectural gesture, as proposed by the French President Emmanuel Macron.

It is a victory for the conservation principles embodied by the international Icomos Charters and the World Heritage Convention, and for the architect-in-chief of the cathedral, Philippe Villeneuve. Eugène Viollet-le-Duc, the architect in charge of the cathedral’s major 19th-century restoration, would also have approved. He wrote 160 years ago, “The artist must completely erase himself, forget his tastes, his instinct …because the goal is not, in this case, to make new art, but only to submit to the art of an era that is no more”.

This article gives insider information on where the restoration process is now, with an outline of what is going to be done next.

The difficult process of removing the 250 tons of semi-fused steel scaffolding, which had been erected for the restoration of the spire prior to the fire, was suspended for several months due to the coronavirus lockdown but re-started in early June. A tall crane has had to be installed by the side of the cathedral to allow roped-up workmen to get inside and cut away the tubes. This is being done gradually, starting from above and the middle in order not to unbalance the massive tangle of metal. Work is carrying on around-the-clock and is planned to be complete by October 2020. 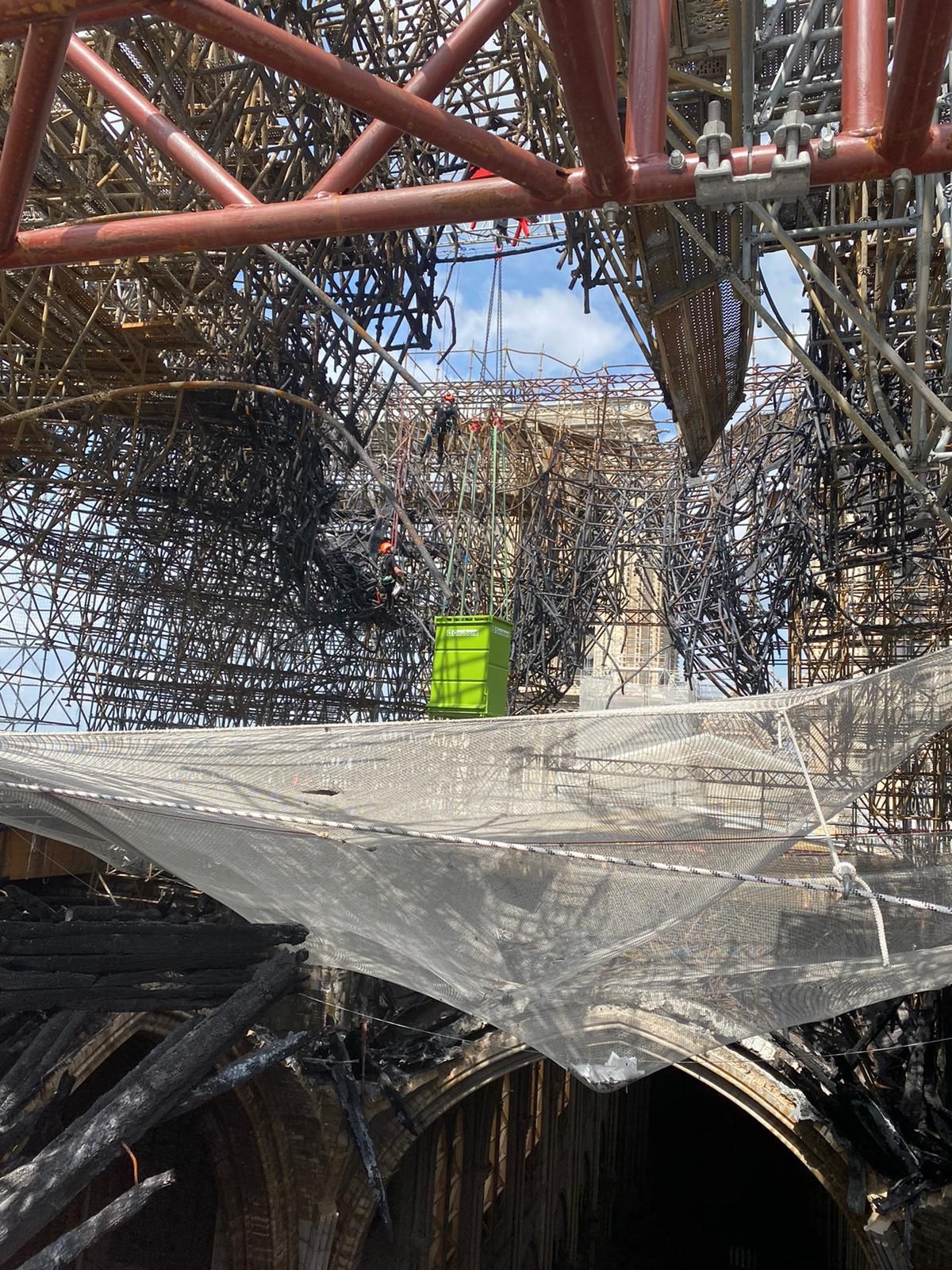 The debris inside the main nave and choir has been removed, but small stones may still fall from the vaults, so the safety nets have been left in place and will be removed only when the restoration begins. A rolling platform (parapluie roulant) has been put over the choir and nave to allow the workmen move around without walking on the vaults. Debris and the burnt beams are being removed, with two-thirds of the choir’s vaults already clear and work starting now above the nave. This operation should also be complete by September or October. The rolling platform (parapluie roulant) over the choir

Close examination of the vaults has revealed that the heat of the fire penetrated the 15cm-thick stone structure to a depth of 2cm. While this does not threaten the overall stability of the vaults, they will require major consolidation. Layers of fibre-reinforced material will have to be applied to the stone surfaces to strengthen their structure at the same time as remaining flexible. There are also five breaches in the vaulting that will have to be filled in first and scaffolding will be erected inside the cathedral to allow access from below. The vaults of the crossing, which collapsed completely, will be rebuilt after the new spire is finished. The entire reconstruction is scheduled to be finished by 2024. 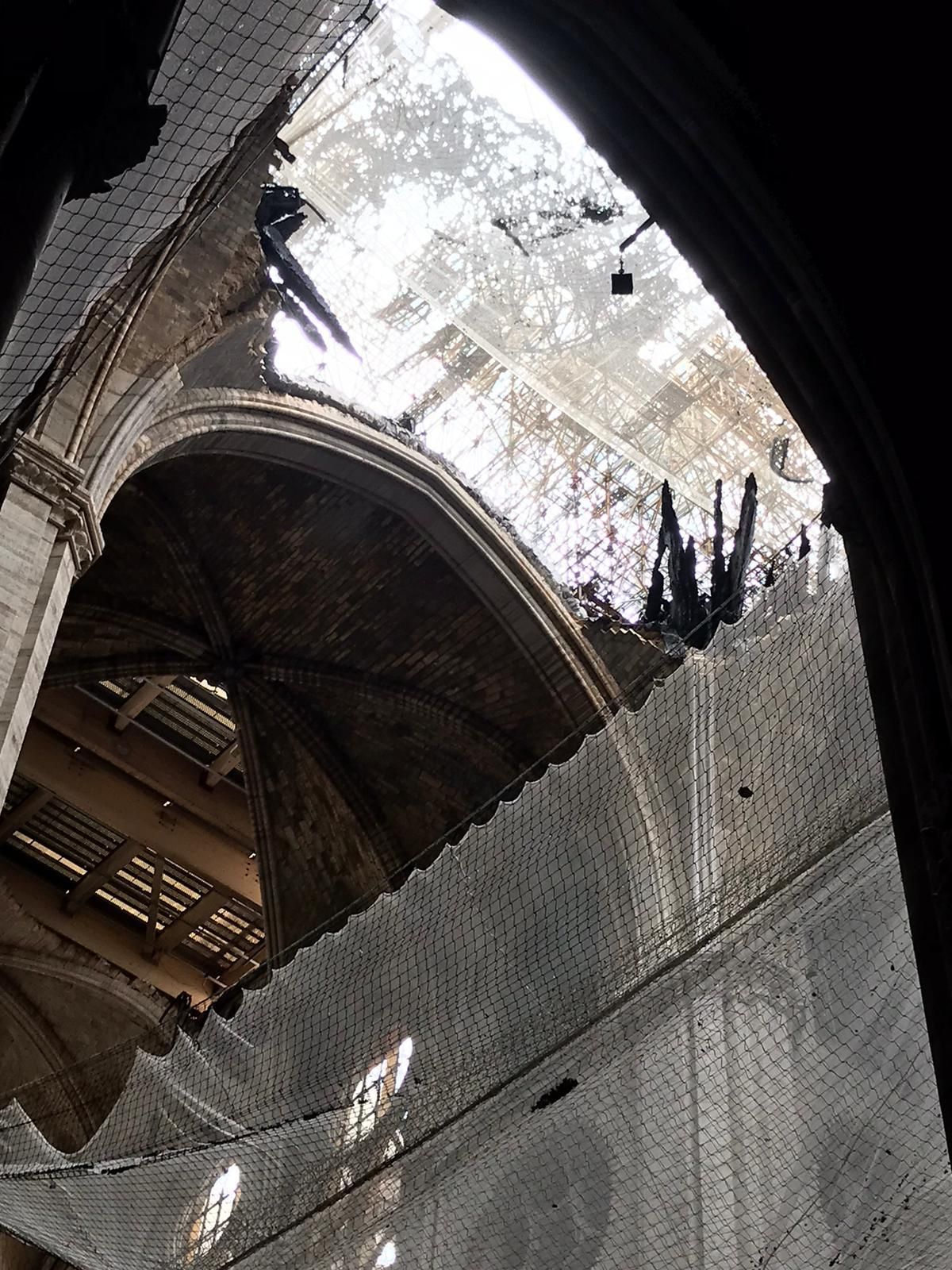 The crossing of nave and transept as it looks today

All three gables, on the north and south transepts and the façade respectively, are currently supported by temporary structures and will have to be dismantled and rebuilt, using the original material as far as possible.

Rebuilding the roof and spire The timbers of the roof over the choir before the fire

Following the recommendations of the Commission nationale du patrimoine et de l’architecture, the roof and spire will be rebuilt in the original manner. The building techniques for these complex timber-framed roofs (trait de charpente), which are considered so exceptional as to deserve inclusion in the Unesco’s List of Intangible Heritage, go back to the Middle Ages and have been kept alive in France by the training centres of the compagnonnage, the carpenters’ ancient guild system. Furthermore, the original roof structure of Notre-Dame was recently studied in great detail by Paolo Vannucci of the university of Versailles, and he has clarified and calculated all its structural solutions. The roof over the choir and nave will be built in the traditional manner with freshly harvested oak trunks, cut by hand, as in the past. The wooden structures over the crossing and of the spire will, instead, be built with seasoned, machine-sawn wood, just as by Viollet-Le-Duc. After the spire has been rebuilt, the statues of the saints that were fortunately removed just days before the fire will be replaced. 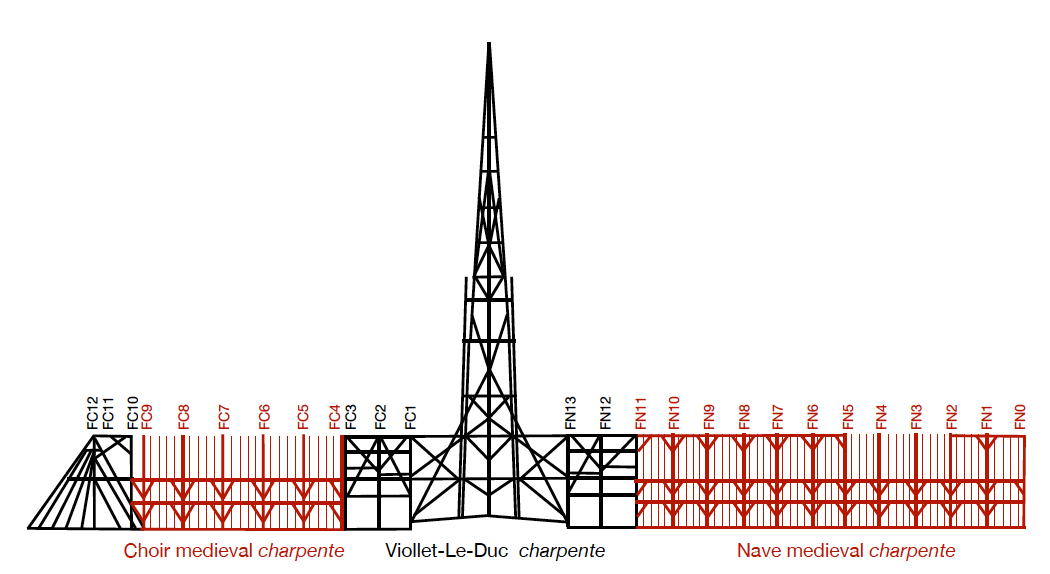 Drawing of the carpentry of the roof and spire of Notre-Dame, showing the different phases of construction

Traditionally, the roofs of important buildings such as Notre-Dame were covered with lead, a noble material that ensured durability and contributed with its weight to stabilising the structure. However, a final decision over the roof covering of Notre-Dame has not been taken yet due to the controversy after the fire over possible lead pollution. While lead pollution was found in the surroundings of the cathedral due to the collapse and melting of the lead tiles, it seems that no pollution was detected further afield despite the dense smoke plume that rose from the fire. This is consistent with the behaviour of lead, which melts at a low temperature but vaporises only at temperatures (1,750 °C) that were not reached during the fire. Furthermore, once lead sheets are in position, they rapidly develop a patina that blocks the release of particles. While other materials (copper, zinc) have been used in some restorations, Notre-Dame deserves, should scientific data confirm the low risks involved, to be covered with a noble material, in respect of tradition. The statues being removed from the spire before the fire

The restoration of Notre-Dame also involves a complete reorganisation of its parvis, the square in front of its main façade that comes under the jurisdiction of the City of Paris. An architectural competition for its redesign is likely to be launched but has not been announced yet. This competition will provide the opportunity for a contemporary "geste architectural", as President Macron originally wanted for the spire of Notre Dame.