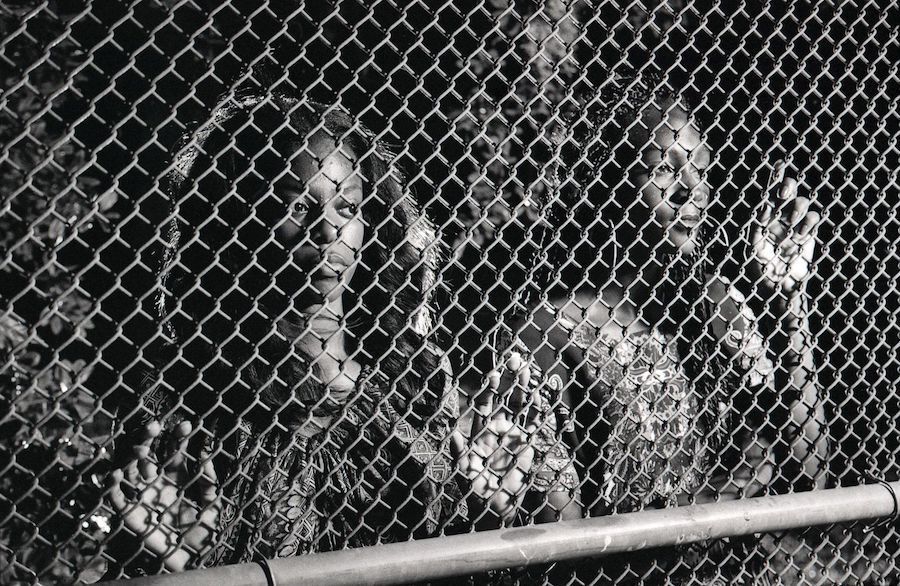 The New Orleans-based artist and filmmaker Garrett Bradley, best-known for lyrical works addressing themes such as race, class, social justice and relationships, will present the multi-channel film installation America (2019). The film references pivotal moments in Black history through 12 black-and-white vignettes, using footage from seminal films such as the unreleased Lime Kiln Club Field Day from 1914—the earliest known film with an all-Black cast—and referencing the 1915 release of Birth of a Nation. The latter is “one of the most virulently racist films that is often regarded as a primary origin point in cinema”, says the co-curator Legacy Russell. Scenes from Lime Kiln Club Field Day show Black actors in joyous and intimate moments, subverting the narrative of Black visual culture in that age of US cinema, which was often guilty of racist depictions of minorities. The 35mm 60-minute silent film was produced by white directors, marking a ground-breaking interracial collaboration between crew members and Black artists, but was mysteriously abandoned during post-production. Negatives of the film were discovered in 1939 by MoMA’s late film curator Iris Barry and conserved and studied for decades before Lime Kiln’s public debut at the museum in 2014.

Working Together: Photographers of the Kamoinge Workshop

Until 27 March 2021 at the Whitney Museum of American Art, 99 Gansevoort Street, Manhattan

This retrospective exhibition aims to revalue the work of the Kamoinge Workshop, a yet-unsung collective of Black photographers who emerged in New York in the early 1960s and sought to “make photographs of and for the Black community”, says Carrie Springer, the Whitney’s assistant curator. The show features more than 150 dynamic photographs that chronicle aspects of the Black experience in the US from the 1960s to the 1980s, including several works that have been acquired by the museum. The show follows a breakthrough exhibition devoted to the collective at the Virginia Museum of Fine Arts earlier this year, which was spurred by the serendipitous rediscovery of the archive of Kamoinge’s founding member Louis H. Draper, who documented the US South and pivotal events of the civil rights movement. The word “Kamoinge” derives from a term in the language of the Kikuyu ethnic group of Kenya meaning “a group of people acting together”. While its work has not received its due until now, the collective has an “unique place in the history of photography”, says Adam Weinberg, the director of the museum, and its achievements take on "a new resonance at a time when collaboration and consideration for diverse perspectives is more relevant than ever”.

This multi-venue exhibition devoted to the late Brazilian artist Hélio Oiticica, a pioneer of Brazilian Modernism, features the artist’s magnum opus, the conceptual installation Tropicália (1966-67)—which addressed the banal cultural marketing of Brazil as a tropical paradise in the midst of an era of oppressive military dictatorship. The work kickstarted a countercultural movement of the same name encompassing art, writing and music, becoming widely popular after the musicians Caetano Veloso and Roberto Gil borrowed the title from Oiticica for a seminal authoritarian album in 1968. Composed of plants and a maze of wooden structures that symbolise the slums of Brazil, the work culminates with a television screen showing vintage images and sounds from Brazilian news. The gallery, which began representing Oiticica’s estate last year, is showing a series of lesser-known works by the artist in its 508 space, including a maquette for an unrealised public garden inspired by a spiral nebula. Before it was forced to close due to the coronavirus pandemic, the Museu de Arte de São Paulo Assis Chateaubriand opened its year-long curatorial programming on the histories of dance with an exhibition that explores Oiticica’s rhythmic Parangolé series, or what he called “a painting in motion”. 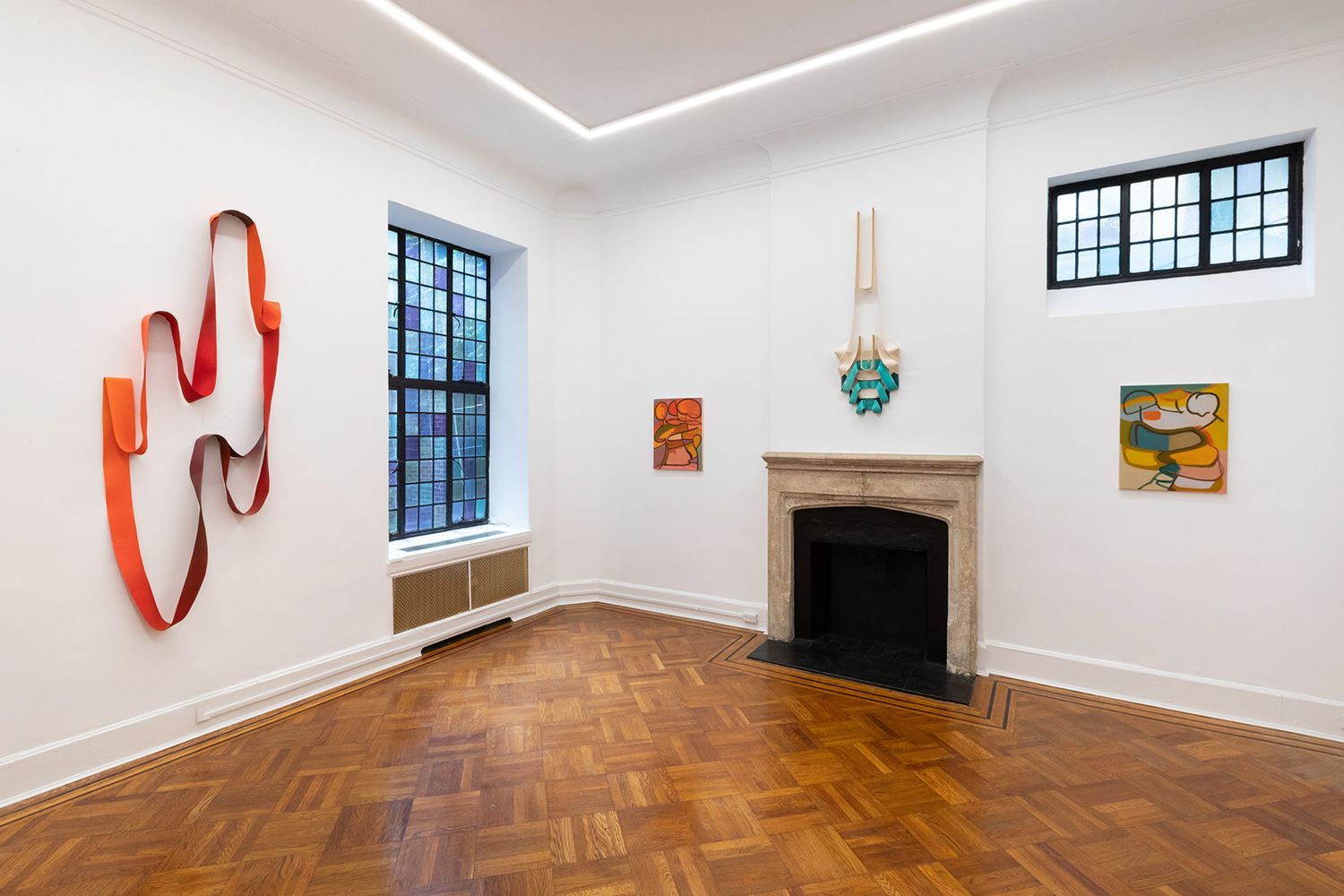 Installation view of Body to Land Courtesy of Turn Gallery

The show Body to Land, a dual presentation of works by the intergenerational abstractionists Elizabeth Hazan and Nicola Stephanie at Turn Gallery will leave you feeling a little loopy—but in a good way. A lifelong New Yorker, 55 year-old Hazan has spent the last couple of years exploring in her practice how digital earth-mapping devices have changed if not distorted our perception of nature. Her vibrant, semi-abstract aerial landscapes are shaped by looping, undulating lines that bend the viewer's sense of scale. Meanwhile, Stephanie, an emerging London-born artist who recently received her MFA from Hunter College, creates cut-and-stitched canvases that playfully fold and loop over themselves. These large, gestural and sometimes even geometric forms render in three dimensions the traditional paradigms of abstract painting. The show inaugurates Turn's stunning new space on the Upper East Side, following the closure of their East Village location in June. —Margaret Carrigan

Tschabalala Self is debuting a new body of work in Cotton Mouth, a solo-exhibition at Galerie Eva Presenhuber outpost in the artist’s native New York. The show features more than a dozen paintings and drawings, three plaster sculptures and an audio piece, all completed in 2020. The figures in the paintings are uniquely Self’s: the subjects are Black men and women, rendered in various combinations of sewn fabrics and paint, and often depicted in a moment of everyday life, imbuing it all with a sense of wonder of dignity. Sprewell, 2020, shows a couple embracing in a New York apartment, an NBA game playing on the TV, and Self’s unique touch filling the tableau with an air of magic. The man, his back to us, wears the jersey of Latrell Sprewell, the basketball player whose talent was overshadowed by a violent 1997 incident in which he choked his coach at a practice. Seeing the jersey mixed up in a lovers’ embrace gives us a poignant moment—the interrelationship of rage and agency, the commodification of both, and the universal desire for love and acceptance that runs under it all. —Wallace Ludel

The US artist Martin Puryear, known for his remarkably poetic and meditative approach to sculpture, presents a series of monumental works made from wood, bronze and other materials that conceptually reference themes ranging from politics to nature in his exhibition at Matthew Marks. Of the six works on view, five made were shown at the 58th Venice Biennale last year, where Puryear was chosen to represent the US Pavilion. Among the pieces making their New York debut is the evocative work A Column for Sally Hemings, a cast iron and painted tulip poplar work that pays homage to the enslaved woman who bore five of Thomas Jefferson’s children, with a base modelled after Jefferson’s home in Virginia. “I value the referential qualities of art, the fact that a work can allude to things or states of being without in any way representing them,” Puryear wrote in 2007. “The most interesting art for me retains a flickering quality, where opposed ideas can be held in tense coexistence.” —Gabriella Angeleti

Julie Mehretu: About the Space of Half an Hour

“And when [the Lamb] had opened the seventh seal”, wrote St. John in Revelations 8:1, “there was silence in heaven about the space of half an hour”. Julie Mehretu’s latest exhibition of new works at Marian Goodman gallery takes its title, "about the space of half an hour", from this New Testament passage. With around half of the works have been painted amid Covid-19 lockdown, the title points to a moment of divine pause in which even the heavens took rest. Mehretu, one of the world’s most prominent contemporary abstractionists, continues to develop her style in these new paintings. They contain her trademark dynamism, marked with a forceful, map-like energy but these paintings are a mixed bag of processes. The artist begins with a photographic image, which is then blurred and erased beyond recognition, before she layers paint, screen prints and drawings on the canvas, all the while sanding and erasing sections to create even more depth within the composition. The result is nothing short of revelatory. —Wallace Ludel 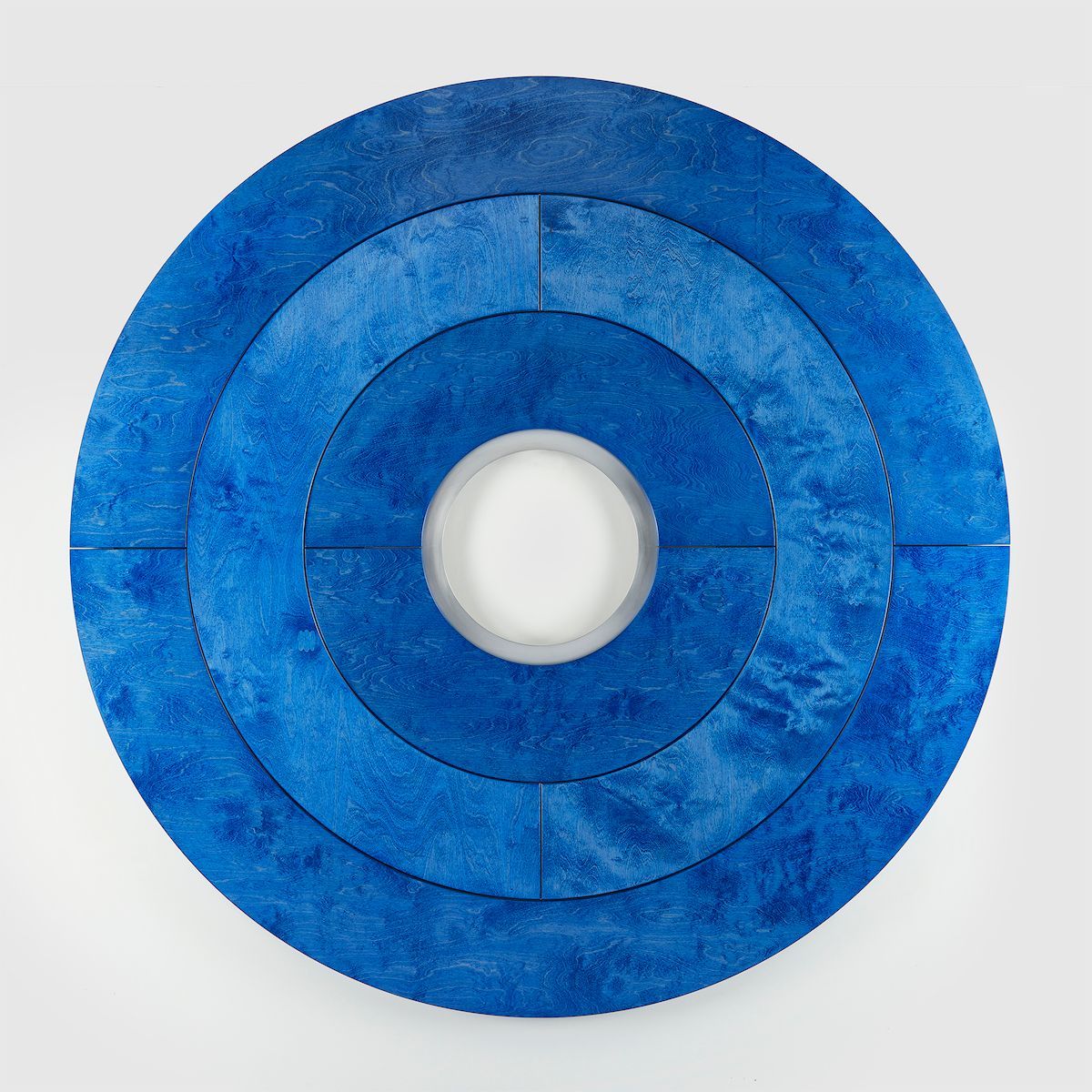 Sam Gilliam’s first exhibition with Pace since the gallery began representing the US colour field painting brings together new works and installations that reflect on the artist’s exploration of colour and shape over his six-decade career. The show includes several vivid, large-scale poured paintings that reference elements of Black culture—including one titled in honour of well-known Black figures and another referencing the jazz culture of Gilliam’s hometown of Tupelo, Mississippi—as well as monochromatic works on paper. The exhibition also debuts a series of geometric wooden and aluminium sculptures, a recent focus for the artist which he began developing after his exhibition at the Kunstmuseum Basel in 2018, titled The Music of Colour 1967-1973. Gilliam became inspired by the influence of traditional African design on the urban architecture in Switzerland and these works provide a poignant meditation on the socioeconomic struggles and racism faced by the influx of African refugees in the predominantly white country. Several works in the show are slated to be included in the artist’s forthcoming retrospective at the Hirshhorn Museum and Sculpture Garden in Washington D.C. in 2022. —Gabriella Angeleti

After the Plaster Foundation, or "Where can we live?"

Home is meant to be a safe place, but for millions across the US, that could soon change. While a moratorium on evictions in New York has meant that those who cannot afford their rent because of job loss during the pandemic will not also lose their homes, that protection runs out on 1 January 2021. The city’s artists are among some of those most affected by such insecurity, as seen in this exhibition at the Queens Museum. Take for example Caroline Woolard, who (illegally) slept in the museum during her 2014 studio residency, and used her time to build a miniature mobile dwelling for artists. But perhaps most important, from a documentarian perspective, are the displays by the Oakland-based curatorial collective, the Museum of Capitalism. For example, Communicability: Landlord-Tenant Relations in a Pandemic (2020) is a collection of letters from landlords and management companies to their tenants, ranging from passive aggressive to downright threatening—apart from one altruistic building owner who reduced everyone’s rent to $100 for the month of April, urging those who had the means to use the extra cash to support neighbourhood businesses. “We all need to contribute a bit to climb back to normal.” —Helen Stoilas