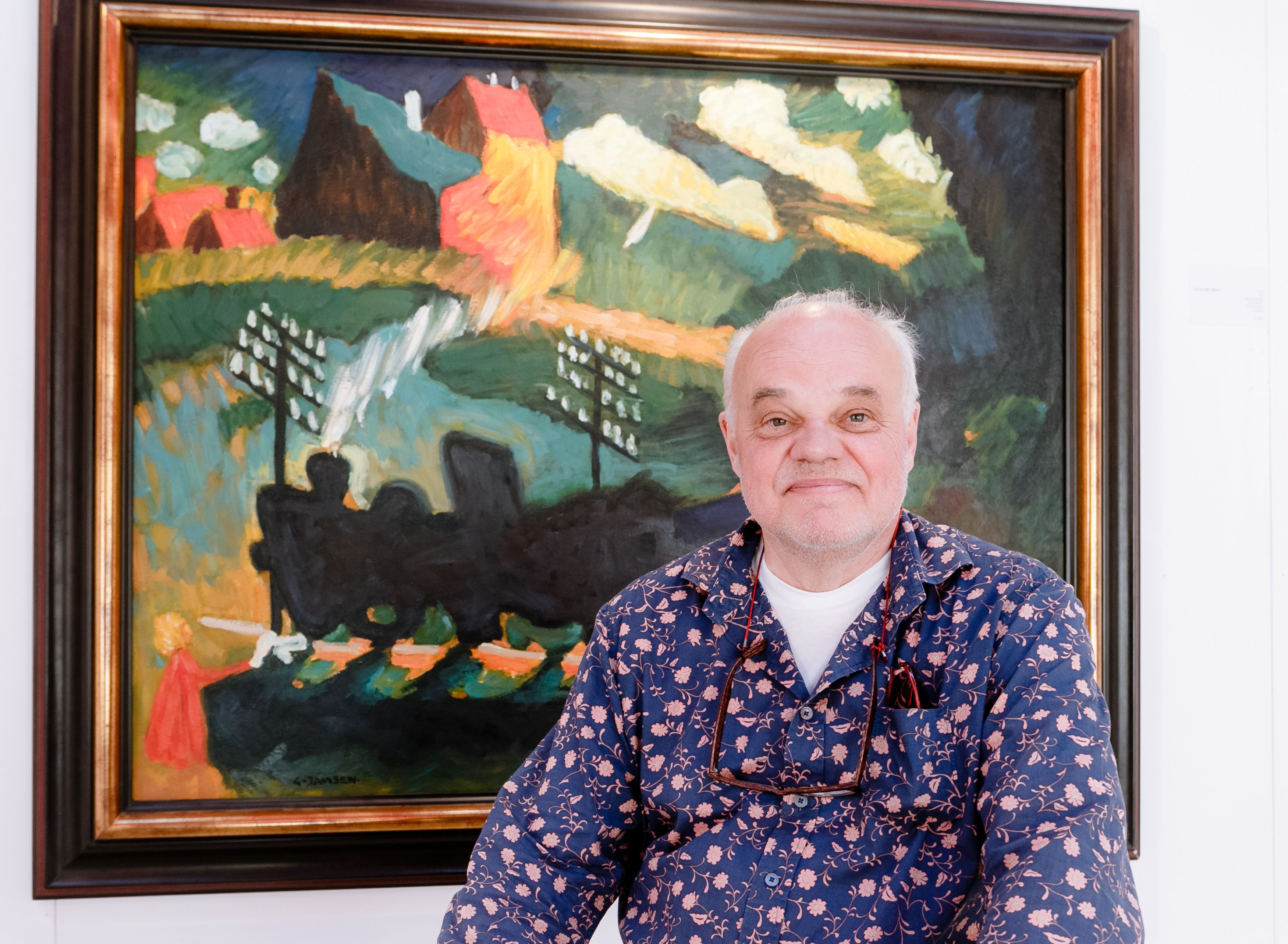 Geert Jan Jansen, one of the greatest art forgers of the past century, poses on 5 June 2016 in List (Schleswig-Holstein) in front of his work “In the style of Wassily Kandinsky, Farewell” Photo by: Markus Scholz/picture-alliance/dpa/AP Images

When French police raided the 17-century chateau in Le Chaux near Poitiers on 6 May, they found 700 faked drawings, gouaches and drawings purporting to be by Modern artists such as Karel Appel, Alexander Calder, Raoul Dufy, Matisse, Dalí, Miró and Picasso. “Five hundred of the works were ready for sale, 200 were still in production”, said the French assistant chief of police in Orleans, Jean Claude Colin. The police also discovered 1,500 forged certificates of authenticity.

Geert Jan Janssen, aged 55, and his partner Ellen van Baren, 48, living in France under the aliases of Mr and Mrs van den Bergen, were arrested on charges of forgery, dealing in forgeries and infringing the law on intellectual property. The police were able to track down the couple through a tip-off by the Munich auctioneers Karl & Faber. One member of staff described what happened: “During the autumn of 1993, Van den Bergen offered us a drawing by Karel Appel. The man was charming and gave the impression of being trustworthy. It was easy doing business with him, he didn’t make a fuss about prices and didn’t try to bargain. He had something of the civil servant in him”.

J. Nieuwenhuizen Segaar, an art dealer from The Hague and an expert on the Cobra Movement and Appel saw the drawing printed in their catalogue for the sale of 30 November 1993 and informed the auctioneers that he believed the drawing to be a fake. However, because the drawing was accompanied by a certificate, it was auctioned and made DM6,900. Speaking to The Art Newspaper, Nieuwenhuizen revealed he had earlier come across similar works in auction houses in the South of France.

In April this year, “Van den Bergen” approached the auction house of Karl & Faber again, this time with works by Chagall, Asger Jorn and an Appel. “The Appel was very bad, the Jorn not much better but the Chagall was quite convincing,” said a member of staff from the auction house. “This time I was on my guard, however, and I decided to check the paintings and the certificates carefully.”

She discovered details in the Appel which did not match the certificate. Segaar was also very suspicious of the certificates: “Appel rarely issues certificates and when he did he didn’t sign them like this nor did he go into details about the technique used.” Karl & Faber also discovered spelling mistakes in the certificate accompanying the Chagall, as well as a stamp which deviated from the normal one used by the Comité Chagall. “This was strange for a French certificate,” said a member of staff from the auction house. She contacted the Comité in Paris which confirmed that the certificate was fake. The auction house sent a photograph of the Appel to Segaar. “I couldn’t be absolutely sure when I saw the photograph but I was somehow convinced it wasn’t authentic,” he said. Art historian Otto van Loo, who was consulted over the Asger Jorn, rejected it out of hand.

The staff of the auction house smelt a rat and set up their own private investigation into the affair. They discovered that Van den Bergen had been to many other auction houses around Germany, including those in Cologne, Bonn, Hamburg and Marburg. “He seemed to be everywhere”. The Munich house alerted detective inspector E. Scholler from the Landeskriminalamt in Baden Württemberg who immediately started an investigation. The trail led first to Paris and then to Orleans where Van den Bergen claimed to run a gallery. The investigation ended in “Ali Baba’s cave”, as the arresting officer Colin described the couple’s rented castle near Poitiers.

The French police then made contact with the police from Amsterdam. Janssen had run a gallery in Edam during the Seventies and another in Amsterdam during the Eighties. He had been arrested twice before on suspicion of forgery but was never convicted due to lack of evidence. Janssen disappeared without trace in 1988 when the Amsterdam police tried to investigate the provenance of a thousand fake lithographs by Karel Appel discovered in a gallery in Amsterdam. The lithographs were reproduced using a silk-screen printing process and sold as the real thing. The only way the two could be told apart was by looking at the reverse side of the paper. In the case of the lithograph, the ink would have been soaked up to show on the reverse, while the silk-screen print uses a different ink leaving the reverse completely unmarked.

The Dutch couple have now been formally charged and could face five years in jail. Their lawyer, J. Wedrychovski, however, believes there is a good case in their defence and has already questioned the propriety of an “exhibition” held at Orleans police headquarters of some 30 of Janssen’s forgeries.