Drowned, beheaded and restored: Napoleon statue returns to museum after 282 days in exile 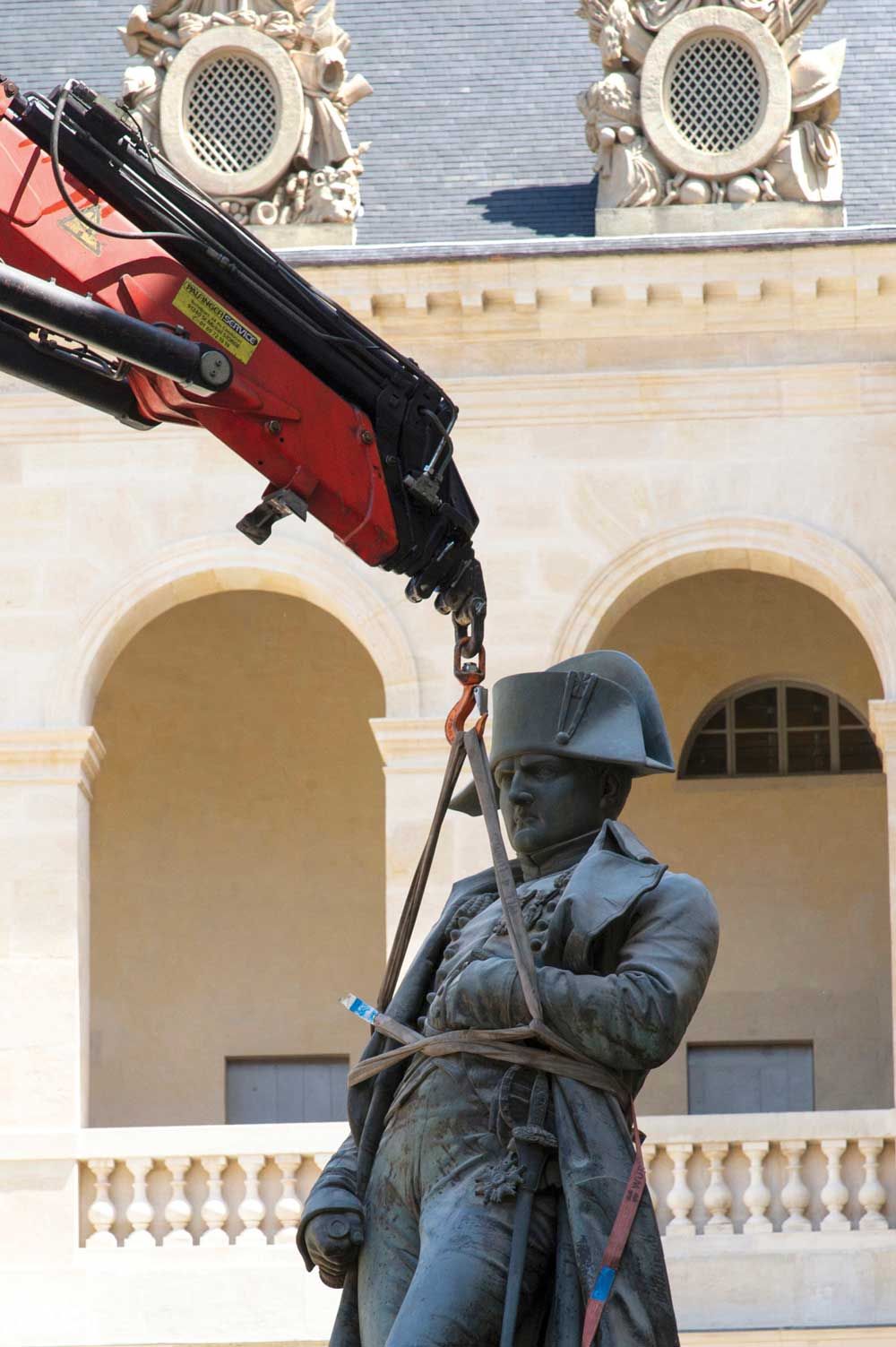 Return from exile: the statue (1833) by Charles Émile Seurre is back at Les Invalides Photo: © RMN-GP/Anne-Sylvaine Marre-Noël

A monumental sculpture of Napoleon Bonaparte (1769-1821), cast from enemy cannons seized during the emperor’s military campaigns, returned to Paris’s Musée de l’Armée Invalides in April after 282 days of exile and a painstaking restoration.

France’s “citizen king”, Louis Philippe I, commissioned Charles Emile Seurre to create the 4m-high, five-tonne bronze in 1833—12 years after Napoleon I’s death—as a replacement for an earlier figure of the emperor that stood on top of the Colonne de la Grande Armée in Paris’s Place Vendôme. Seurre’s version was made from 16 Austrian and Russian cannons captured during the Ulm and Austerlitz campaigns of 1805.

The earlier statue, which depicted Napoleon as a Roman emperor, was destroyed after his forced abdication in 1814. Louis Philippe, who was elected in 1830 with parliamentary backing, wanted the new sculpture to represent the pre-imperial Bonaparte—who, like the new French king, had been a soldier in the French Revolution of 1789. The work shows Napoleon wearing a military coat over a uniform of the Imperial Guard, with his hand tucked characteristically into his half-buttoned waistcoat. The writer Honoré de Balzac saw the work as a symbol of the elected monarch’s early democratic leanings.

Its subsequent fate is also symbolic of France’s chequered history. In 1863, amid the pomp and pretensions of the Second Empire, Napoleon III relegated the statue to the suburbs, replacing it with another Roman imperial rendering. Seven years later, with the Second Empire shattered and the capital besieged by the Prussian army, and as the Paris Commune took control, the work was moved again, with disastrous consequences. Shipped to the state’s marble deposits for protection, it ended up at the bottom of the River Seine. How this happened is unclear: some say that the barge carrying the statue capsized, some claim that the work was deliberately submerged for its protection and others think that it was thrown overboard in an act of popular revolt. According to a further, unverified account, it had lost its head when it was fished out four months later.

The statue gathered dust in a government warehouse for the next 40 years, until Gustave Léon Niox, the director of Les Invalides, moved it to the museum’s main courtyard in 1911. It remained there until July 2014, when it was removed for treatment.

The restoration involved “gentle scrubbing with a soft powder made from ground apricot stones”, says the conservator Diana Da Silva, who spent around 100 hours cleaning and polishing the piece. After the cleaning, several layers of microcrystalline wax were applied to preserve the patina and prevent corrosion.

According to Sylvie Leray-Burimi, the museum’s chief curator, metal samples were taken to try to shed light on the story of the severed head. The results are not yet in. “For the mystery to be solved, we just have to wait and see,” she says.

Napoleon’s statue ending up at the bottom of the River Seine in 1870 was most likely no accident. It was either tossed into the water by the French in a desperate attempt to prevent the sculpture from being vandalised by the invading Prussian army during the Siege of Paris (or worse, captured and paraded through the city as a war trophy), or by those who opposed Bonapartist rule. If the latter is the case, its disposal into the Seine represented a symbolic toppling or unseating of power of the Bonaparte political dynasty.

In June, the debate about what to do with contentious public monuments was reignited as anti-racism protests took place across the globe. In Bristol in the UK, a statue of the 17th-century slave trader Edward Colston was pulled down, dragged through the streets and thrown into the harbour. Like the monument to Napoleon, it was fished out of the water. As we went to press in late June, conservators were treating the Colston memorial, making sure to preserve the newly applied graffiti which has become part of its story. Also like the Napoleon statue, the Colston sculpture appears to be destined for a museum. Whether it will be displayed or languish forever in the storeroom as a reminder of a shameful chapter in history remains to be seen. --Emily Sharpe, Editor, Fairs and Special Reports

Appeared in The Art Newspaper Archive, 268 May 2015
More ArchiveTopicsMonumentsNapoleon Bonaparte Paris Conservation & PreservationMonuments and their histories