Mastermind behind Wedgwood fakes was at work for 20 years 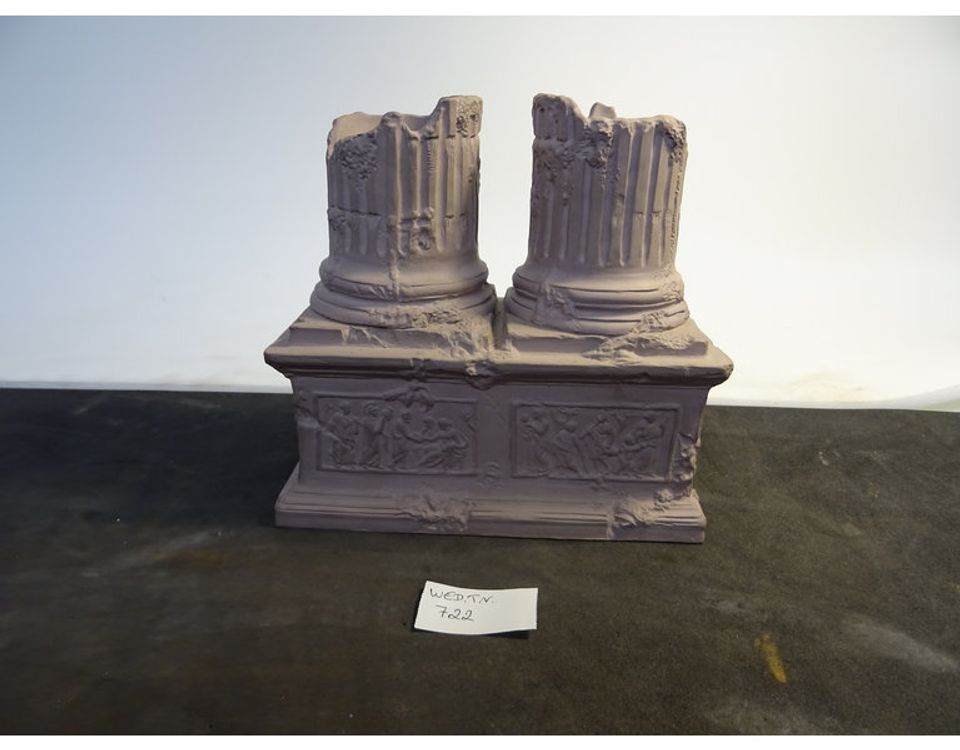 A series of Jasper ruined-column vases came onto the market in the United States and Britain. Examples with a pair of columns are so rare that even the Wedgwood Museum does not have a commercially-sold example, but only the original model on which they were based V&A Wedgwood Collection

Fake Wedgwood is being offered on the market in a fraud which could be a major problem for collectors and dealers. Large numbers of fraudulent copies have probably been sold and most serious collectors of eighteenth-century Wedgwood will find that some of their recent acquisitions are fakes. The quality of the copies is so good that even the experts have been fooled for the 20 years that the fakes have been in circulation.

The Art Newspaper can reveal that the Jasper and Black Basalt decorative ware which has been copied includes plaques, miniature busts of classical figures, ruined-column vases and sphinx paperweights. The first fake was spotted two years ago and since then the number of items identified as having been faked has reached 30. The scale of the fraud makes it considerably more serious than the recent case involving fake Whieldon ware.

Until now the existence of the Wedgwood fakes has gone unpublicised, partly because it was felt that investigations should be undertaken by the Wedgwood Museum and Scotland Yard before the news was broken. The trade has also been concerned that publicity will inevitably have a very damaging impact on the market.

Although police inquiries have not yet been completed, the extent of the problem is now emerging. According to Tisch Roberts, Sotheby’s Senior Vice President, it is “the worst ceramics fraud” this century. She admits that the number of fakes in circulation must be considerable. “There are bound to be some in public collections”, she says.

Both the production and marketing of the fakes suggest the work of a mastermind. Most of the faked items are worth between £500 and £5,000, enough to make the fraud profitable, but avoiding the very expensive works which would be rare and more carefully scrutinised. Jasper, which has the relief decoration, is highly sought and epitomises the Wedgwood style. The simplicity and elegance of Black Basalt is also prized.

The fakes are difficult to detect. The clay is very similar in composition to the original, so weight and texture appear to be correct. The designs also look right. Copies taken from a mould made from an original are normally smaller, but the fakes have been manufactured so that the relief decorations are spaced out and at first glance the dimensions appear correct. Initially, even the experts could only identify the fakes by painstakingly comparing them side-by-side with a genuine piece.

The first fake was identified after American collector Stanley Goldfein bought a rare “Triumph of Bacchus” plaque at Sotheby’s New York on 24 April 1992. Dated to the late 1770s, the pale-green Jasper plaque had the Wedgwood & Bentley mark and sold for $12,100. Goldfein admitted that it was beautiful and rare, with “everything to set a collector’s juices flowing”.

Quite by chance, a few days later Goldfein received some photographs from a respected Wedgwood expert which included a similar Bacchus plaque. Peter Williams, a London-based dealer and consultant, then spoke on the phone with the New York collector and the two men soon discovered that their pieces were identical. Both plaques even had the same minor flaw, a slightly discoloured bump.

Williams, whose suspicions were also aroused by the quantity of 18th-century Wedgwood he had recently been offered, then showed his plaque to the Wedgwood Museum. A comparison with a genuine plaque revealed his to be a fake. The New York piece was also sent for examination and declared to be a copy. Sotheby’s made an immediate refund.

The appearance of multiple examples of other rare items led to further investigations. A series of Jasper ruined-column vases came onto the market in the United States and Britain. Examples with a pair of columns are so rare that even the Wedgwood Museum does not have a commercially-sold example, but only the original model on which they were based. Six vases have now been submitted to the Wedgwood Museum for authentication, three of which were fakes, and other ruined columns which have recently turned up are known from photographs.

What makes the fraud so disturbing is the discovery that some of the newly identified fakes appeared on the market as long ago as 1974, a time when prices of 18th-century pottery were booming. The majority of the fakes seem to have been sold to America, which is by far the largest market for antique Wedgwood. Again this may have been a clever ruse by the fraudsters as the best source of authentic items for comparison is the Wedgwood Museum in Staffordshire, a relatively inaccessible place for American collectors.

The Wedgwood Museum believes that the copies have been made in Britain. “The composition of the clay shows that it is British. The expertise would probably come from someone with knowledge from North Staffordshire”, said curator Gaye Blake Roberts. Scotland Yard’s Art and Antiques Squad is now making inquiries and a full investigation is expected to be launched shortly. The police have already had some suspected fakes dated with a thermoluminescence test, although the results are not being released.

In addition to criminal charges against the fraudsters, those responsible could also face civil action. Josiah Wedgwood & Sons, the company which still makes Jasper and Black decorative ware, has the trademark name and copyright. “We will vigorously protect our rights and would take the appropriate legal action,” a company spokesman said.

The Wedgwood fakes will be shown alongside genuine examples in an exhibition on “The Art of Deception” at the International Ceramics Fair, in London’s Park Lane Hotel, 10-13 June. Research on the fakes has been undertaken by Gaye Blake Roberts, Pat Halfpenny of Stoke-on-Trent’s City Museum and consultant Peter Williams.

Appeared in The Art Newspaper Archive, 38 May 1994
More ArchiveTopicsScandalWedgwoodInvestigationJasper and Black BasaltFakes & copiesFakes and forgeries