The mysterious donor, left, and the Curran copy offered to the Hilliard Museum

Museums and universities across the US are being targeted by a suspected art forger who has tried to donate works, complete with auction house records, that the museums now believe to be fakes. In September, a man posing as a Jesuit priest, visited the Hilliard University Art Museum in Lafayette, Louisiana, and tried to donate a work that the museum says was a skillful forgery.

Research into his previous donations at other museums has uncovered a history of what appear to be fraudulent gifts going back 20 years.

Last month, Mark Tullos, the director of the Hilliard museum, emailed colleagues about fake donations. The email was circulated on the Museum Security Network and the American Association of Museums Registrar’s Committee listservs. According to Tullos, a man dressed as a Jesuit priest came to the museum wanting “to donate a painting in honour of his late mother. [He had] an elaborate story about his Philadelphia family—their patronage to museums. He brought an American impressionist painting he purported to be by Charles Courtney Curran with what appeared to be proof of provenance.”Tullos said the man, calling himself Father Arthur Scott, first wrote to him on what appeared to be church letterhead. On Tullos’ invitation, Father Scott paid a visit. “He got out of a red Cadillac dressed like a priest, with the collar and pin,” said Tullos. The museum accepted the painting, issued a receipt, and Father Scott “blessed us in the parking lot” and left, said Tullos.

The director asked museum registrar Joyce Penn to examine the painting. “She said, ‘This doesn’t look right,’ so she went down to the art prep area and took out her blacklight.” The painting glowed suspiciously, so Penn used a microscope to take a closer look and discovered the tell-tale dot matrix pattern of a reproduction, which had been painted over and signed. Tullos admits that the forgery was good enough to fool him. “At first glance, you really could not tell. The hero of this story is our registrar,” he said. 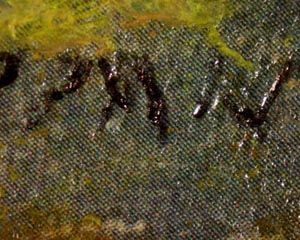 The discovery reminded Penn of a previous incident. She pulled out a file and found a photo of a man who had called himself Mark Landis, who Tullos recognised as Father Scott. This man had also tried to donate a work to the Louisiana State University (LSU) Museum of Art in 2009. As Tullos started to contact museums, more and more cases came to light. His searches led him to Matthew Leininger, who first came across “Landis” in 2007 while working as a registrar at the Oklahoma City Museum of Art and has compiled a dossier of his attempted donations.

Leininger says he became suspicious after the man donated a Louis Valtat watercolour to the museum, which became part of the collection. “He brought five more works to the museum, and we were getting ready to take the new pieces to the museum’s management.” These included a Paul Signac watercolour, a Stanislas Lépine oil on panel, a Marie Laurencin self-portrait, a French academic nude drawing and an Honoré Daumier sketch. As Leininger’s team researched the works, they came across a curiously similar Signac that had been donated to the Savannah College of Art and Design (SCAD) Museum of Art in Georgia around the same time. A press release sent out by the museum announcing the gift also boasted of receiving works by “Milton Avery and Marie Laurencin, as well as a French academy drawing in red chalk,” all donated “by Mark Landis in honour of his father, the late Lt Cmdr Arthur Landis Jr.”

Leininger also used a blacklight to examine the Lepin. “Everywhere where there wasn’t paint it was glowing white,” he said, explaining that anything that wasn’t original oil paint should effloresce under the light, and he remembers the paint smelling “fresh”. Under microscope, pixels denoting a digital reproduction could be seen. He then discovered that the original Signac watercolour was in the collection of the Hermitage Museum in St Petersburg. The Oklahoma museum rejected the works, including the Valtat, which was “deemed a forgery” and was deaccessioned.

Leininger believes that all the works he came across “look like they were done by the same hand. Of course each will have a slight variation.” The paints used in the watercolours also all appear to be from the same palette, says Leininger. 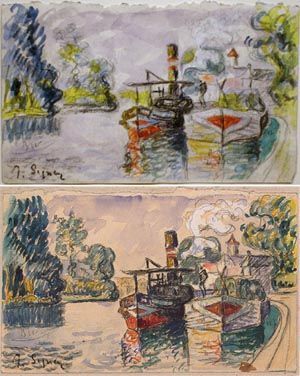 So far, Leininger has found over 30 US museums that have been approached by a man going by the name “Mark Landis”, or by apparently the same man using the name “Steven Gardiner” (the names used seem unlikely to be his real name). The list also includes institutions such as the School of the Art Institute of Chicago, the National Portrait Gallery in Washington, DC, the St Louis University Museum of Art, the Michael C. Carlos Museum in Atlanta, the San Francisco Art Institute, the American Folk Art Museum in New York, and the Memphis Brooks Museum of Art. The earliest donation he found is a Laurencin watercolour, Portrait of a Young Girl, 1935, given to the New Orleans Museum of Art in 1987, but later deemed a forgery. Many of the museums have recently become suspicious of these donations, because no tax deduction forms were asked for—sometimes Landis/Gardiner explained this, saying that he was on disability with heart problems.

Leininger, who is now at the Cincinnati Art Museum (which has not been approached with suspicious donations), says he notified local police, the FBI and the IRS, but as he hasn’t actually committed fraud, “I don’t know what you could get him on. All I can do is let people know.”

Meanwhile, the Hilliard University Art Museum in Louisiana, plans to include the “Curran” in an exhibition exploring authenticity and forgery, entitled “Say It Isn’t Faux!”, set to open in January 2011. But Leininger has more ambitious hopes: “My dream would be to get all these works from all the different museums, host an exhibition in his name and invite him as the guest of honour. Then he’d really have heart problems.”