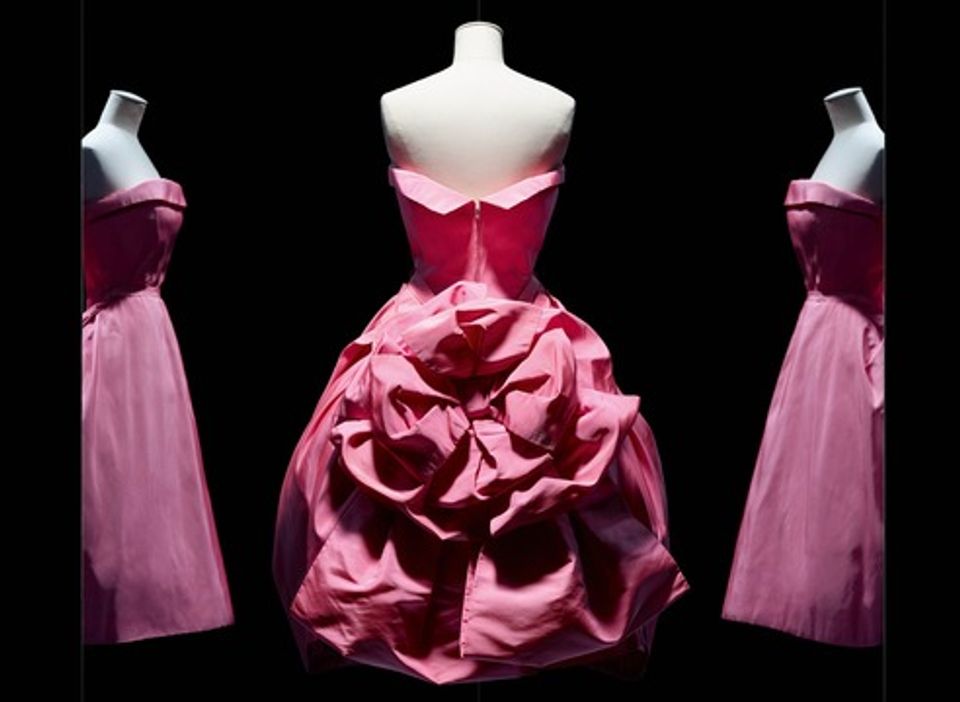 The luxury brand Dior is celebrating its 70th anniversary with the largest ever exhibition of its haute couture clothes in the Musée des Arts Décoratifs in Paris.

It includes more than 400 dresses made between 1947 and 2017 that were designed by the founder of the house, Christian Dior (1905-57), and his successors: Yves Saint Laurent (1936-2008), Marc Bohan (born 1926), Gianfranco Ferré (1944-2007), John Galliano (born 1960), Raf Simons (born 1968) and, most recently, Maria Grazia Chiuri (born 1964). Most of the works are from the Dior Héritage collection and have never been shown in Paris before, but the collection toured Beijing, Shanghai, Tokyo and Seoul between 2013 and 2015 under the title Esprit Dior. The current show’s co-curators are Florence Müller of the Denver Art Museum and Olivier Gabet, the director of the Musée des Arts Décoratifs.

There is also a section on Dior as a collector of 18th-century antiques, Art Nouveau and works by his contemporaries, including Alberto Giacometti, Salvador Dalí, Alexander Calder, Leonor Fini, Max Jacob, Jean Cocteau and Christian Bérard. An idea of the value of the brand that Dior founded is given by the purchase in April by LVMH Moët Hennessy Louis Vuitton of Christian Dior Couture for €6.5bn. 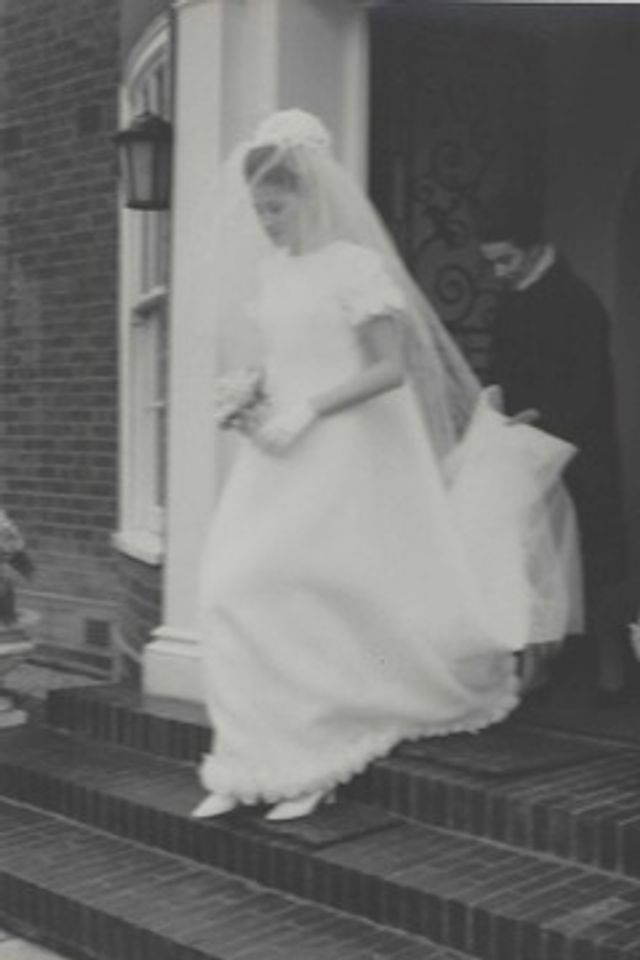 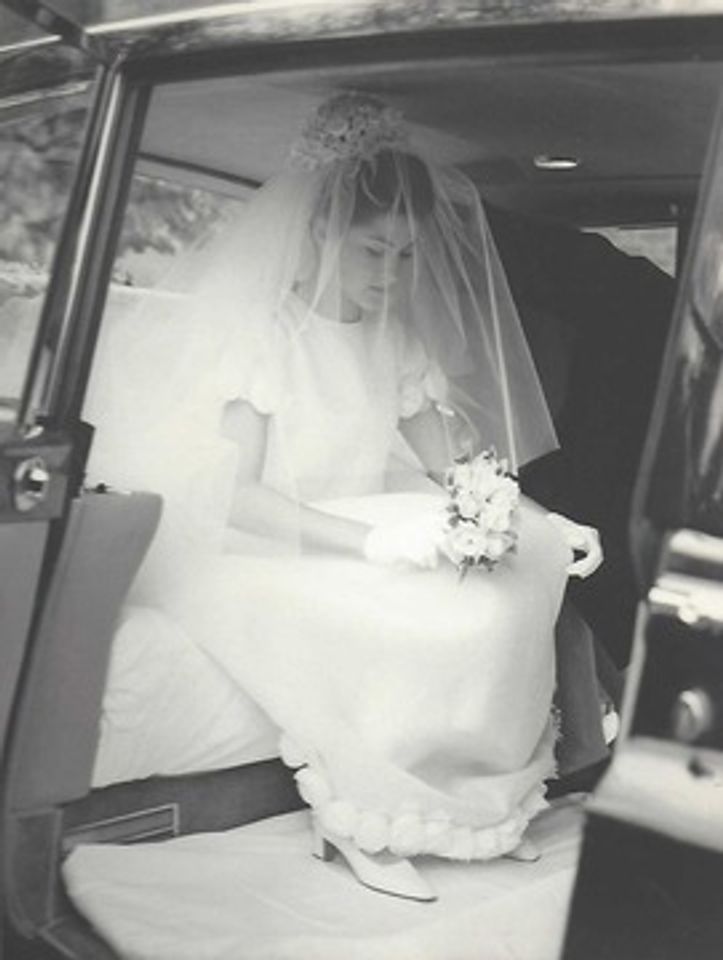 Lady Ritblat, why did you choose Dior for your wedding dress?

I became engaged to a Frenchman in March 1966 and as soon as it was announced, my mother and future mother-in-law, who dressed at all the couturiers, transported me to Paris to choose a dress. We went around the various couture houses and I found the clothes rather dull and dowdy. Then we came to Dior.

I had no idea what to expect as Dior himself had died, Saint Laurent was no longer there, and Marc Bohan was the chief designer. The salon was in the Avenue Montaigne, where it still is, although there was, of course, only couture at that time. The rooms were light-filled, pale grey and white, very quiet and serene. The vendeuse was somewhat forbidding in an austere French way.

I was shown the wedding dress of the spring-summer collection, a very simple but structured, translucent organza, A-line dress that stood away from a slim silk sheath. It had short sleeves, which, like the hem, were trimmed with hand-made organza roses. The short veil was attached to a juliet cap completely made up of the same but smaller roses. The shoes had a chisel toe and a delicate block heel, also in white organza, hand-made to order.

It was finished with a pair of short, white, kid gloves, but I did not have these made to measure as then everyone in London who got dressed up wore gloves, and I already had a pair. They were to be the “something old”, but Dior shortened them at the wrist and put a button on. The whole thing was modern, young, exquisite and different.

Bohan also designed my bridesmaids’ and pageboys’ outfits. The bridesmaids had smaller, belted versions of my dress, and the pageboys had red velvet knickerbockers, white socks, white silk shirts with floppy black silk bows at the neck, and black, silver-buckled, patent leather shoes.

My mother also organised me into a grey and white pinstriped tweed suit. The skirt was made in three tiers, with the pinstripes going in alternate directions. It hung from a silk bodice over which was a short, white, linen top with a col officier and large, amusing, white buttons and a short collarless jacket with the same fun button in grey.

It was deceptively simple, but most elaborately constructed, although feather light, fastened with a complicated series of hooks and poppers. It had been shown with a jaunty, red, straw boater, which was also ordered.

For my going away, I had a pink silk faille dress and coat with a matching juliet cap and pink silk shoes. I got changed into this outfit at the end of the reception, and when I came out of the lift into the hotel lobby everyone applauded.

Apart from being exquisite and original, all the outfits were fun. You did not choose the fabric but accepted the models as a work of art. They were perfection.

A chief fitter looked after the essayage. Each piece had its own expert, so a milliner came to fit the headdress, and their shoemaker the shoes. I had had marvellous ball gowns made in London for the many galas and dances that took place in the 1960s, but the first fitting at a Parisian couture house is like the final fitting anywhere else.

Dior insisted that the dress be delivered in person by the fitter, and so she brought it over to London and dressed me for the ceremony, tut-tutting as the hairdresser had made my chignon slightly too big for the juliet cap. But she redressed it and all was well. I remember that we put her up, not in the grand hotel where the reception was held, but in a small hotel near our house. Dior was visibly miffed.

All the outfits are now in the Victoria and Albert Museum except the wedding dress, as I insisted on cutting off the train so that I could wear it at parties. Great mistake.