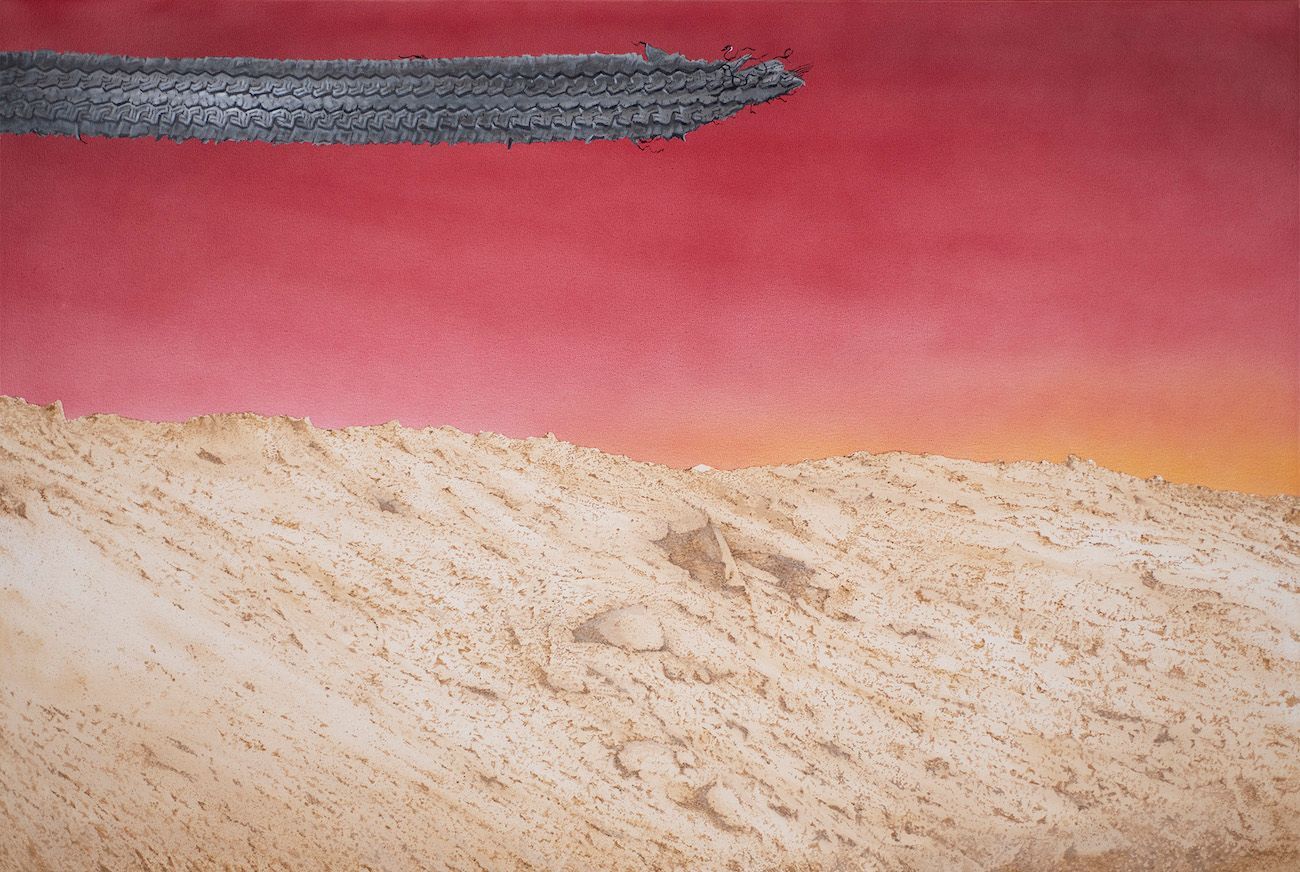 The gallery is debuting eight new paintings by Ed Ruscha, one of America’s most significant living painters. Six of the canvases are two feet high and eight feet long, and each expands upon elements of the artist's lexicon that have, over the nearly six decades and counting of his career, become cornerstones of the zeitgeist. There are three iconographic landmarks explored in this show: flags, tires, and mountains. They are on occasion remixed, such as in the painting Hardscrabble (2020) which features a mountainscape at sunset, above which a massive tire tread floats in the sky. This single painting almost serves as a map to the cardinal points of Ruscha’s mastery: the sunset becomes a vehicle in which the seasoned painter can show off his trademark gradients, which he has revelled since at least the 1970s; the mountainscape allows him to display a technical prowess that is, though as efficient as they come, still full of life and joy and uniquely his; and the massive floating tire tread, along with the title, offers a glimpse at the oblique humour that Ruscha has sustained all these years.—Wallace Ludel

Until 31 January in Times Square, Manhattan

As the residual dystopia of 2020 persists even with the turn of the new year, the Melbourne-based digital artist Daniel Crooks, who is best known for his works that distort perception and temporal experience, has produced a hypnotising video work that aims to transport viewers to a “place where the world is less concrete”, the artist says, and where the “models we have in our heads of what is real becomes slightly less fixed”. Shown across 72 synchronised electronic billboards above mostly shuttered retail spaces in New York's Times Square—which has become an ominous space since the onset of the pandemic left it desolate—the work is reminiscent of a time-lapse video on loop, where train tracks and receding doorways lead the viewer to vaguely familiar but fleeting parallel worlds. The work is being presented by Times Square Arts in partnership with the Asia Society Museum and the inaugural Asia Society Triennial, titled We Do Not Dream Alone and on view in multiple venues until 7 February. The work is part of Times Square’s Midnight Moment, a year-long programme of digital exhibitions that are shown monthly from 11:57 to midnight. —Gabriella Angeleti

Around the time lockdown restrictions went into effect in New York last year, the three artists selected for The Studio Museum in Harlem’s second annual artist-in-residency programme, which is organised in collaboration with MoMA PS1, commenced bodies of work that reflect on ideas around “longing”, a subject with new pertinence amid the pandemic. With works spanning painting, performance and other media, the artists Elliot Reed, E. Jane and Naudline Pierre imagine a “future-perfect that prompts us to recognise what worlds we’ve wasted with all our wanting”, the curator, Legacy Russell, writes in her curatorial essay. Reed presents works that reference the often “malicious, ill-intentioned” ways we receive information from social media and news channels, the artist says; E. Jane has produced a series of intimate and poignant three-dimensional lightboxes, integrated into a larger installation of three-dimensional lightboxes; and Pierre presents a series of large-scale paintings populated by winged beings that appear to inhabit an alternate universe, or a subliminal space between the material and immaterial worlds. —Gabriella Angeleti 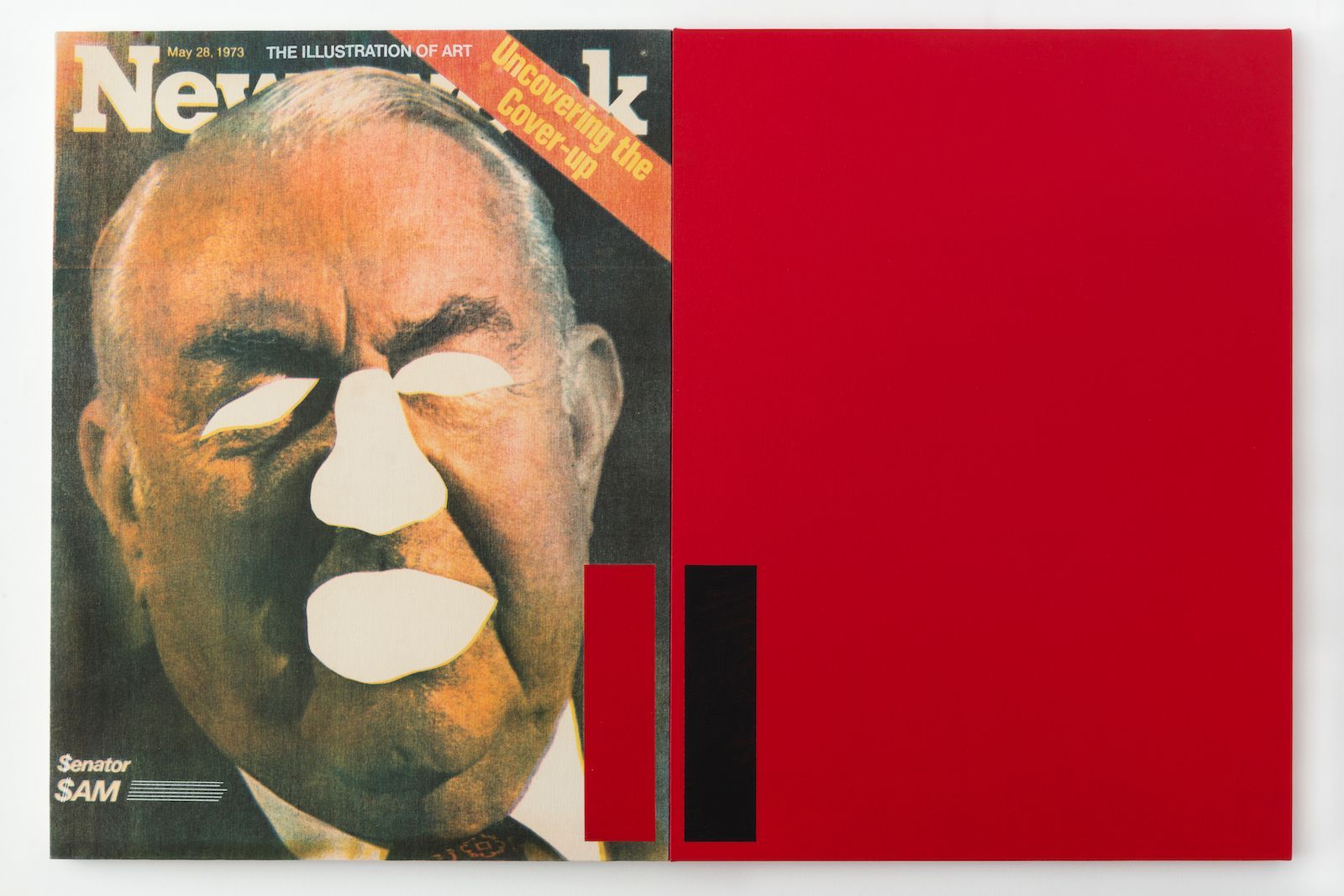 Antonio Dias, The Illustration of Art/Uncovering the Cover-Up (1973) Nara Roesler

The Brazilian gallery has inaugurated its expanded street-level space in Chelsea with a series of exhibitions (each on view for five days) curated by its artistic director Luis Pérez-Oramas, a celebrated Venezuelan writer and curator and the Museum of Modern Art’s former curator of Latin American art. The mini-exhibitions highlight the work of nine artists that the gallery represents, beginning with a show of conceptual works by the Brazilian artist Antonio Dias, best known for his involvement in the Tropicália movement, and proceeding to others featuring pieces by Tomie Ohtake, Milton Machado and others. Galeria Nara Roesler, which also operates in São Paulo and Rio de Janeiro, hired the award-winning Brazilian architect Miguel Pinto Guimarães to design its new home in New York, which dwarfs the gallery’s previous third-floor space in the Upper East Side. The shows attest to the gallery's aptitude for championing dynamic Latin American art even as the American and Brazilian art markets face severe economic disruption amid the Covid-19 pandemic.—Gabriella Angeleti

The Oklahoma-based artist Raven Halfmoon is making an impact with the New York debut of a series of large-scale stoneware sculptures that honour symbols of her Caddo heritage and the nearly-extinct art of Caddo ceramics, an ancient tradition that was largely forgotten after the arrival of European colonists and has been little studied by scholars. The totemic works, which aim to critique the appropriation of Indigenous cultures, also draw inspiration from contemporary subjects and some archaeological wonders like the Moai, the mysterious carvings of human figures on Easter Island. The artist says she has also been deeply inspired by the Caddo elder Jeri Redcorn, who is known for having revived the culture's lost ceramic arts and has been selected to create work to inaugurate the First Americans Museum in Oklahoma, which plans to emphasise a contemporary rather than historically ethnographic representation of Indigenous art.—Gabriella Angeleti

Shirin Nishat’s Land of Dreams (2019) is the New York debut of a sweeping new body of work by the prolific Iranian-American artist. The centrepiece of the exhibition is the 25-minute film from which the show takes its title; it follows the fictional Iranian art student Simin as she travels throughout New Mexico on an assignment that involves photographing strangers in their homes and asking them about their dreams. As the dreams are recounted for Simin, they are made manifest in the video, and the viewer watches them unfold with a sweeping, surreal physicality. In a second film of similar length that is also on view, The Colony (2019), the same protagonist is now a spy tucked away in a bunker where she is forced to archive the dreams she has captured. Both of these films, along with a documentary directed and produced by Sophie Chahinian and titled The Making of Shirin Neshat’s ‘Land of Dreams’, will be viewable online. Also in the exhibition are over 100 photographic portraits that Neshat captured during the filming process: for many of these, she asked her subjects about their dreams before transcribing them in Farsi on the printed portraits.—Wallace Ludel 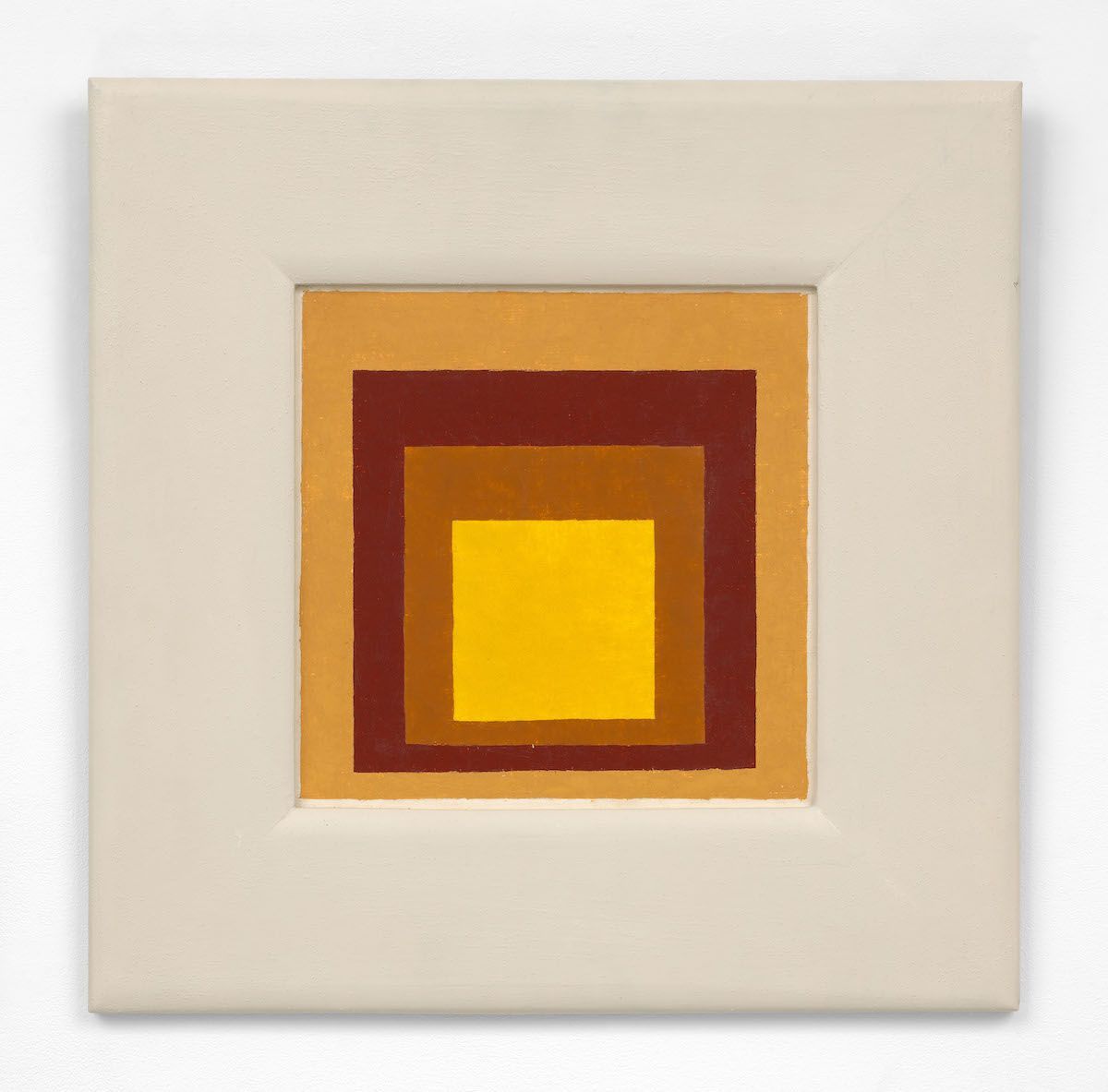 Josef Albers, Study to Homage to the Square (1954) David Zwirner

With a two-person show of works by Giorgio Morandi and Josef Albers, David Zwirner has unloaded an unlikely exhibition of a pair of art historical heavy-hitters whose work, when seen side by side, dances and duels in surprising albeit logical ways. Born just two years apart (Albers in 1888 and Morandi in 1890) the two have singular visions. Albers’s motif of nested geometry from his Homage to the Square series, which the artist worked on from 1950 until his death, created a vehicle to explore what would become modern colour theory, while from the early 1920s onwards, Morandi dedicated himself to deceptively simple still lifes of bottles and other ephemera that became the vehicle for endless exploration. Juxtaposing the two artists teases out what can happen when a question is probed for so long that it creates a microcosmic universe, birthing worlds of infinite possibility.—Wallace Ludel

As the conversation around xenophobia and racism reached a fever pitch in the US last year, the Iranian-American artist Amir H. Fallah produced a series of striking large-scale paintings that reflect on his experience of being what he calls a “hyphenated American”. The Los Angeles-based artist, who came to the US as a child in the wake of the Iranian revolution, says the works explore value systems and his cultural identity and were inspired by images and moral teachings in the children’s books he reads to his son at bedtime. The centrepiece of the exhibition, a painting from which the show draws its title, contains “a reference to a symbol that entered into my life just a few blocks away from the Capitol building—a bittersweet coincidence”, the artist says. “What is going to happen to America? I’ve never been more depressed about the future of my home.”—Gabriella Angeleti

Angel Otero: the Fortune of Having Been There

The Brooklyn-based Puerto Rican artist Angel Otero presents a series of works with abstract and figurative elements drawn from art history and childhood memories, from the furniture in his grandmother’s home to references to Pierre Bonnard’s still lifes of domestic spaces. Works like Lucky Mirror (2020) appear to depart from—but remain informed by—previous bodies of purely abstract works in which Otero collaged oil and other elements to produce vibrant tapestry-like compositions on unstretched canvas. In a previous interview with The Art Newspaper, the artist, who has dramatically evolved and experimented with his style since his first presentation with Lehmann Maupin in 2011, said he was “mostly drawn to traditional methods of painting—despite my work being completely untraditional—and rethinking traditional practices”.—Gabriella Angeleti