Unauthorised works by the anonymous graffiti artist have been sold on the internet; prices for these have been illegally inflated with fake bids 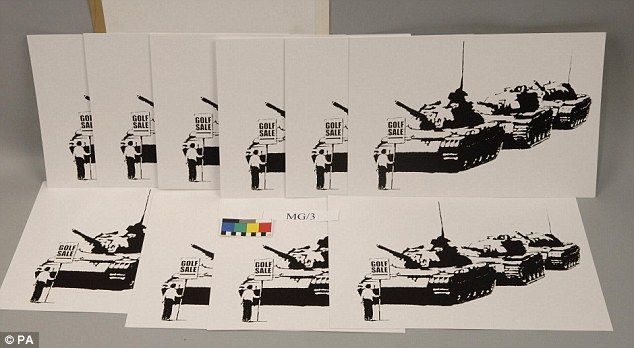 Unauthorised prints by the anonymous graffiti artist Banksy have been sold on eBay as limited edition, signed works, by employees of the company which publishes and authenticates the artist’s works on paper, Pictures on Walls (POW). These have been stamped with a replica of the POW blindstamp and some of them carry forged signatures. The prices for the prints have then been raised by an illegal practice known as shill bidding in which sellers or their associates make offers for goods to inflate the price artificially.

Details of the fraud have been revealed to The Art Newspaper by a whistleblower who collaborated in the operation.

In a statement, Banksy, his dealer Steve Lazarides, and the directors of POW, confirmed that unauthorised prints “have been sold on eBay” and stressed that they along with members of the public “have been victims of criminal behaviour”. The company has launched a full-scale investigation and is inviting concerned collectors wanting to reauthenticate their Banksy prints to come forward.

According to our source’s account, the fraud first started around a year ago, as prices for Banksy’s work were rapidly escalating. Three junior employees of POW—one of whom has now left to set up another print sales company—distributed unauthorised prints to several people who were asked to sell these on eBay. It is not clear if these were printed in addition to the limited edition run or if they were part of the standard overrun produced by publishers which is then supposed to be destroyed.

Our source placed around 20 of these on eBay on behalf of the POW employees and believes the number of works sold in this way could be as high as 100. However, Banksy, Steve Lazarides, and the directors of POW estimate that only 25 unauthorised prints were auctioned on the website. According to our source, the price for every print was then raised artificially through shill bidding.

“They told us to do that…we’d start up other accounts and just…type in £1,000 higher than what someone else had put on it…we did that on everything we sold.”

When asked if the POW employees specified a minimum price at which the prints should be sold, our source said: “[For] some of them [they] did and then…after a while, [they] just told us to do whatever so I’d just watch and if there were a lot of people bidding on it…then I’d just see how ridiculous it could get with the money, I’d just keep adding on money. Someone always outbid me…I never had to buy anything myself.”

The Art Newspaper has identified two fraudulent Banksy prints sold on eBay. An edition of the artist’s Soup Can sold on 26 June 2007 for $12,210. It was described by the seller as: “Signed, embossed and numbered 3/10.” Crucially, when the seller was asked by another eBay user if there was an “email from POW confirming that [the seller was] the registered owner”, the seller replied that there was not because the print had been “bought by appointment to the [POW] office”.

When POW releases a new print, existing clients are notified by email in advance. Buyers purchase works directly through the POW website and receive an email confirming that they are the registered owner of the print in question. The company does not sell works “by appointment”. The seller of the Soup Can told another eBay user that the print could be authenticated by calling POW and speaking to a specific employee, one of the three involved in the scam.

Another unauthorised print placed on eBay is an edition of Banksy’s Grin Reaper which sold on 23 December 2006. This was also said to have been “bought by appointment” with the POW office. It was described as “signed, numbered 92/300 and embossed with the POW stamp”. Again, potential buyers were told that authenticity could be “confirmed” by calling POW and speaking to a specific employee.

According to our source, on one occasion POW employees asked one of the people selling the unauthorised prints to forge a Banksy signature before placing the work on eBay. Our source also revealed that the bad prints were stamped with replica blindstamps to match the original emboss of the authentic limited edition run. An email, seen by The Art Newspaper, from one of the POW employees involved in the scam to one of the eBay sellers explained that they were attempting to obtain a “new old emboss” for an unauthorised print.

In a statement to The Art Newspaper, Mark Stephens of the law firm Finers Stephens Innocent said: “Banksy, Steve Lazarides, Pictures on Walls and its directors are most concerned to have been advised that they and some members of the public have been victims of criminal behaviour. As a result a full scale investigation has been instituted.”

“It appears that in spite of strict fiscal controls and strict controls of the physical prints that 25 bad prints have been sold on eBay.”

“Pictures on Walls have called on eBay to assist in tracing these sales and also in tracing the money which will inexorably lead to those that have cynically betrayed the trust of the public, the artist and the company.”

“Pictures on Walls would ask any victims to contact them via the company website (www.PicturesonWalls.com). As for collectors who are concerned as to the authenticity or unique nature of their print the company and Banksy will be happy to re-authenticate the prints to any concerned collectors.”

Banksy said: “They say it’s better to be a fake somebody than a real nobody, but I don’t think that applies to art prints. If it turns out that limited editions have not been limited in edition then I sincerely apologise. This is particularly unfortunate for the people who buy my work to flip it for a quick profit on eBay, as I wouldn’t want to affect their mark-up.”

A few years ago, Banksy was a graffiti artist unknown to the mainstream art world. But his canny handling of the media has brought his work to the attention of a much wider audience; his anonymity has intrigued the public and helped feed the media interest. Consequently, prices for his work have soared. In February 2006, his Tramp Angel spray paint on board sold at Sotheby’s for £6,600. By April 2007, his spray paint on steel Space Girl and Bird commissioned for pop band Blur’s Think Thank album made a record £288,000 at Bonhams. Today his collectors include film stars Angelina Jolie and Brad Pitt, who spent $400,000 at the artist’s Los Angeles warehouse show Barely Legal last September.

This success has been achieved despite, or perhaps because, Banksy has bypassed the traditional route to art world success, moving directly from the primary market to auction sales, avoiding galleries which deal in secondary sales.

One of the few dealers who has been able to acquire enough work by Banksy to sell on the secondary market is Acoris Andipa. He spent several months assembling Banksy paintings and prints for an exhibition at his Andipa Gallery in Knightsbridge earlier this year. He says Banksy presents particular problems for the trade. “The due diligence we exercise on a £2,000 print is the same we’d exercise for a painting worth half a million.”

When offered a Banksy print for sale, Mr Andipa says he asks for “the original invoice from Pictures on Walls or the gallery where it was bought; proof of payment (for example, a credit card statement showing payment for the art) and an email or certificate from POW or Lazinc [Steve Lazarides’s gallery] confirming that the seller is the registered owner of the print. We turn away eight out of ten Banksy prints offered to us even though most are probably genuine. I have looked at hundreds of examples of Banksy’s signature. Some of the ones on eBay are ridiculous.”

The presence of forgeries is just one of the difficulties for collectors of the artist’s prints. One Banksy collector interviewed by The Art Newspaper says that he has no paperwork for many of his authentic prints by the artist. “You have to realise that people started buying Banksy when you could pick one up for £30; they didn’t keep the receipt or think about the provenance, it was not important to them at that time so there are a lot of prints knocking about that don’t have any provenance.”

There is also a problem with forged paintings. On 5 April, Christie’s withdrew two Banksy paintings from its South Kensington saleroom amid fears that they were fake. In an email sent to us at the time, Christie’s said: “[We] will not offer for sale any object that we know or we have reason to believe is inauthentic or counterfeit.”

In a statement to The Art Newspaper, eBay said: “Maintaining a secure site for buyers and sellers is eBay’s first priority. With over 15 million registered users in the UK, it is sad reality that, on occasion, a fraction of users choose to misuse eBay. Ebay identifies prohibited activity in the majority of these cases and we stop them, often before any of these transactions are completed. However, as eBay does not ever take possession of an item, we cannot know for certain if something is authentic. We invest millions of pounds each year in securing the safety and security of the site; indeed, we employ over 2,000 people whose sole responsibility is in this area. We are extremely advanced at identifying shill bidding on the site and with six million listings being added each day, this is a challenge we are tackling head on.”

“We are grateful to The Art Newspaper for bringing their investigation to our attention and would urge them to report their findings to the police. This would then enable us to share confidential information that could secure a successful prosecution.”

“Following our own investigations, we can confirm that four users have been suspended from our site.”

The Art Newspaper will be liaising with police.