We take stock of the mania for commemoration that has overtaken New York and Washington, DC 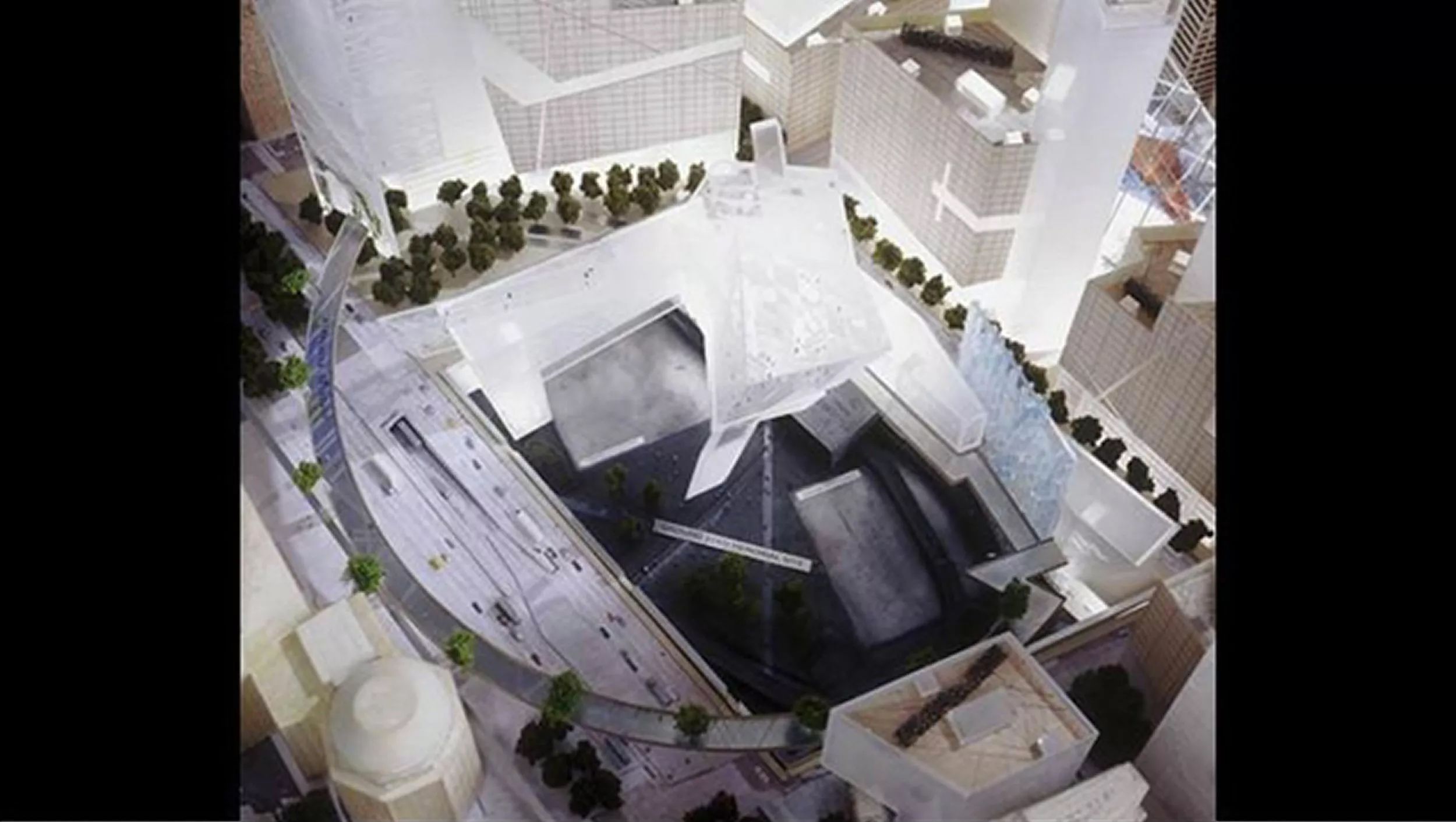 Until only recently, public sculpture in New York has been an occasion for frivolity, such as Keith Haring’s works placed along the medians of Park Avenue in the 1990s, funded by billionaire Michael Bloomberg, now mayor of the city.

It is the former mayor, Rudolph Giuliani, who is setting the tone for memorials and public art by his insistence that any architectural plan for the rebuilding of the World Trade Center site give priority to a victims' memorial.

This decree could give the advantage to architect Daniel Libeskind, whose plan features a memorial plaza at the heart of Ground Zero that looks a lot like a cemetery, complete with a Wall of Remembrance. Libeskind knows this territory. His Jewish Museum in Berlin, with angular abysses and dead-end hallways, is essentially a work of funerary sculpture.

But not everyone is lining up to embrace the new aesthetic of mourning. The writer David Gurevich, concerned about a trend toward death worship, says: “We used to look down on civilisations that worshipped the dead, because ‘look what happened to them.’”

For now, however, mourning seems to be where the commissions are. Some artists are not even waiting for those commissions. Constantin Boym whose “Buildings of Disaster” are miniatures of architecture stricken by tragedy has now added replicas of the Dakota apartment building where John Lennon lived, and the tunnel near the Pont d’Alma in Paris where Diana, Princess of Wales was killed.

In New York the Battery Conservancy, a preservation philanthropy in lower Manhattan, has hired the Dutch landscape designer Piet Oudolf to create the $4.4 million Commemorative Gardens, “perennial plantings, flowers and passages for meditation honoring the heroes and victims of September 11, 2001.” Oudolf is, however, wary of over-memorialisation: “Monuments are taking away attention instead of making people think. I’m talking about processes and things that change through the season. I’m not just talking about trees and shrubs, but plants that flower and die and come again the year after.”

Yet artist Leon Golub says: “If you’re going to fight an aggressive war, it’s too early for memorialisation; you’ve got to fight the fight first—you’ve got to sacrifice the bodies.”

The Irish Hunger Memorial, installed in July 2002, is an odd creation even by the loose standards of contemporary art installations: a hillside rising from the concrete sidewalk in Battery Park City, on the edge of Manhattan, west of the former World Trade Center. Paths traverse the tiny patch of rocks and grass (planted with soil from Ireland) and lead visitors to a roofless stone cottage.

The memorial was constructed in 1982 to honour the suffering that drove Irish immigrants to the US. If that message is unclear, as it is to many passers-by who assume the site is another ruin from 9/11, texts recalling Irish hardship are written into the walls of another walkway built into the memorial’s massive concrete base. The project was chosen from an original field of 150 entrants and was built by the sculptor Brian Tolle and the firm 1011 Architects for slightly more than $5 million (£3.13 million), not including the cost of the land.

The monument takes it place in a swath of memorial sites that begins a mile south in Battery Park and will eventually stretch farther north than the Irish Memorial—an area that New York City, always prodded by its real estate interests to christen new neighborhoods, might call “Monument Valley”.

New York is filling with memorials, not just the ad hoc paper-and-ribbon shrines to the 9/11 dead or the official components of commercial reconstruction plans, but monuments to war veterans, dead police, Holocaust survivors, sailors, and a range of other constituencies. And New York is not alone.

In Washington DC, groups are battling over the depiction of the Korean War and Franklin D. Roosevelt. These quarrels recall fierce fights in the 1980s over the Vietnam Veterans Memorial and the sculptural field that marks the bombing of a federal building in Oklahoma City on 19 April, 1994.

Today’s battles are shaping design, content, and budgets and are likely to colour the entire field of public art for years to come.

An anomaly in the middle of a commercial area, the Irish Hunger Memorial draws on precedents in land art and installation. So far, no imitations have emerged, but if any single style weighs on other recent monuments, it is the Minimalism of the Vietnam Veterans Memorial in Washington, designed by Maya Lin when she was 21 and at Yale.

This is on the Capitol Mall between the Washington Monument and Lincoln Memorial. Lin’s design slices into a gentle rise in the park with a downward path along a polished reflecting wall inscribed with the names of almost 60,000 Americans either killed in Vietnam or missing in action, and upward again in the same gentle rise. When it was inaugurated the Right attacked the design’s abstraction and its absence of explicit patriotism, but veterans and their families are there day and night.

One critic called it populist Minimalism, missing the point that the memorial makes no bid to win over its audience—the populism, if any, is in its success, not in its conception.

Beyond its quiet dignity and its hold on visitors, Lin’s design introduced elements that, in less refined realisations, would become fixtures in public art. The slope gives access to disabled visitors (there are plenty among war veterans); the reflecting wall of names, which you are encouraged to touch, is truely interactive, a perpetual reflection of the public (i.e., the nation) in its representation of the casualties of war. The massive work mourning the dead makes no overt judgment on the war that tore Americans apart. It is visitable in the Mall 24 hours a day.

Nearby, the Korean War Veterans Memorial (1995, $18 million) quotes Lin in its slab of polished stone with inscribed names. But atop that slab are statues of American troops rising from the ground, a sop to literalist critics, the same critics on the Right who placed an American flag and a statue of three soldiers a few hundred metres away from the Vietnam Veterans Memorial. Visitors rush past them to visit Lin’s memorial.

“Lin-Lite” seems to be the new official style, evident in New York’s Police Memorial less than a mile south of the Irish Hunger Memorial. This also has a sunken plaza and a wall of names.

Plans for a memorial in the reconstruction of the World Trade Center site include the inevitable sunken plaza and a wall inscribed with names. “That’s one of the big problems with this stuff; it’s so literal,” says Leon Golub.

Memorials are also falling victim to political correctness. The Franklin D. Roosevelt Memorial, erected near the Vietnam Veterans memorial in Washington in 1997 for $48 million consists of four neo-Aztec plazas to mark each of Roosevelt’s four presidential terms. In 2001 another element of literalism was added to it: a wheelchair, sculpted by Robert Graham for $1 million.

Roosevelt was crippled by polio at 39 and could not walk, but was never photographed on crutches or in a wheelchair (and stated that, if a memorial were ever built for him, it should be no larger than his desk).

But recently politicians caved in to pressure from groups representing the disabled. Politicians also removed FDR’s trademark cigarette holder from his likeness on a US postage stamp. Heroes these days do not smoke (they are also never represented nude).

Mass-memorialisation worries Edward Linenthal, who wrote a book about the Oklahoma City bombing and the thousands of designs sent in by the public for subsequent memorial (The Unfinished Bombing OUP, 2001): “Memorials, especially memorials to violent events, are seen as ways to contain emotional wreckage. After September 11 it was so interesting how architects jumped in immediately, as if somehow design was going to solve the issues posed, as if a memorial can do all the remembering for you.”

In fact, the parks are now being crowded with “permanent” works that look a lot like installations in biennials—and may be made by the same people. Little space is left for future generations, who may consider placing term limits on monuments in the way that time limits are put on bodies in some cemeteries. The World War II Memorial, under construction on the Mall in Washington, promises to gobble up another chunk of territory there.

One entry to the commemorative field which appeared last September in Rockefeller Center, is Eric Fischl's “Tumbling Woman’, a sculpture of a figure that appeared to have fallen to the sidewalk from great height. The anniversary of the September attacks proved to be the wrong occasion to try standing public sentiment on its head, even if the installation bore the imprimatur of Jerry Speyer, the wealthy art collector and real estate power who is also a trustee of the Museum of Modern Art. Once the media seized upon what appeared to be a violation of official mourning, the sculpture was whisked away. So was the artist, who made no comment on his work at the time. Another less conspicuous exhibition of sculptures of falling bodies inspired by 9/11 met with the same public scorn. The free expression critics who exploded during the “Sensation” crisis at the Brooklyn Museum were mostly silent.

• Originally published in The Art Newspaper with the headline "The trail of tears: memorials multiply"