An outsize dose of Gilbert & George 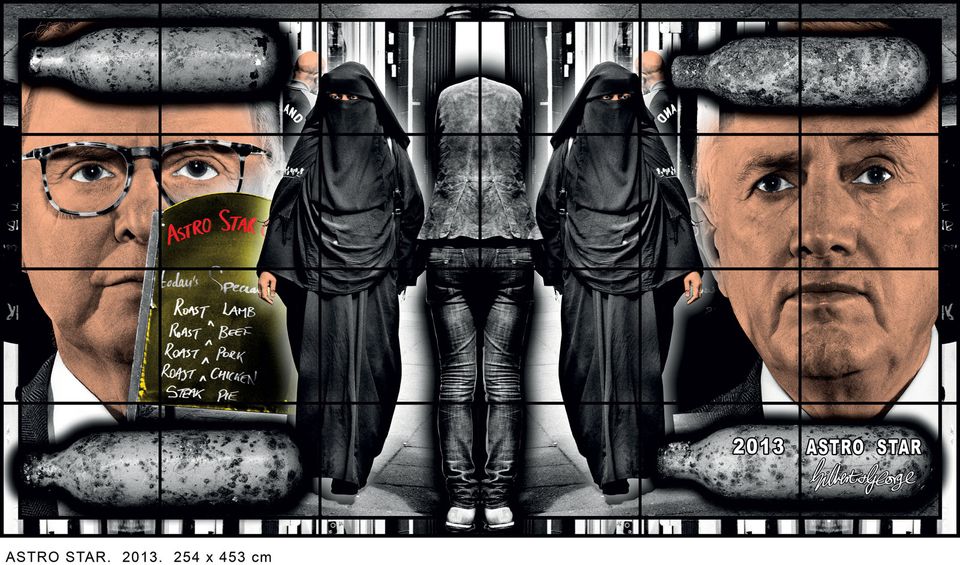 After a summer in the ancient Roman town of Arles, I can say that the French are very clear about their boundaries. When it’s time for lunch, for example, those two and a half hours are sacred, and commerce be damned. Could the French understand a “living sculpture” like the artists Gilbert & George, whose life together is their work and whose work is their life?

During the week they spent in the tiny Provençal city that Van Gogh put on the art map and where their largest retrospective to date is on view, the natty British duo cut striking figures among the tourists and enthusiasts attending the 49th Rencontres de la Photographie d’Arles, an annual festival of photography. Gilbert & George (“two people, one artist”) make photos, too, sculptures to them. Massively scaled, they constitute Rorschach-style depictions of themselves (buck naked or well-tailored), with their bodily fluids adrift in urban landscapes, their fake beards, their dirty-mouth manifestos (or Fuckosophy), and the tabloid headlines that litter and irritate their minds. They’re collages, really, often nasty and rambunctious, narcissistic and riven with gay sexual politics.

This is all lots of fun in small doses, but that’s not what’s happening here. Evidently, “Great” (capitalised) appears in the exhibition’s title to infer not just quality or pride but grandiosity run wild.

Perhaps the two organisers of this five-venue travelling show—the Serpentine Gallery’s artistic director, Hans Ulrich Obrist, and the Moderna Museet’s director, Daniel Birnbaum—felt that the duo’s introduction to the Provençal region could achieve maximum impact by immersing viewers in a relentless thematic inst­allation of their signature, photographic grids and scatological texts on the subjects of art, sex, money and religion, all far larger than life.

Gilbert & George are not easily intimidated, and here they jumped at the challenge offered by the vast former train repair shed housing the exhibition. It’s one of several humongous buildings on the 15-acre campus of the Parc des Ateliers, where the Luma founder, Maja Hoffmann, is constructing an archipelago of arts institutions, soon to be anchored by a polished steel and glass research and exhibition tower designed by Frank Gehry to echo the boulder-strewn slopes of the Alpilles in the distance.

The project has not been without local controversy, but the “Arles miracle”, as Obrist put it, definitely found favour with the 200 collectors, artists and friends invited to an opening night dinner for Gilbert & George that Hoffmann gave in the garden of her house across the road, on the site of an ancient Roman necropolis.

The honorees returned the compliment by performing an “Arles version” of their Godology, penned earlier that day. (“God’s just crap. God’s probably English. God will fix it.”) I enjoyed this—until they told me how much they like Donald Trump. “We think he’s a genius,” Gilbert said. “He’s fixated the whole world.” Perhaps Gilbert & George should stick to their own dictum: “To be with art is all we ask.”

• Gilbert and George: The Great Exhibition (1971-2016), Luma Arles, until 6 January; travelling to the Moderna Museet in Stockholm, the Astrup-Fearnley Museet in Oslo and the Reykjavik Art Museum.