A good catch: The Mackerels now looks set to be authenticated as a genuine Van Gogh 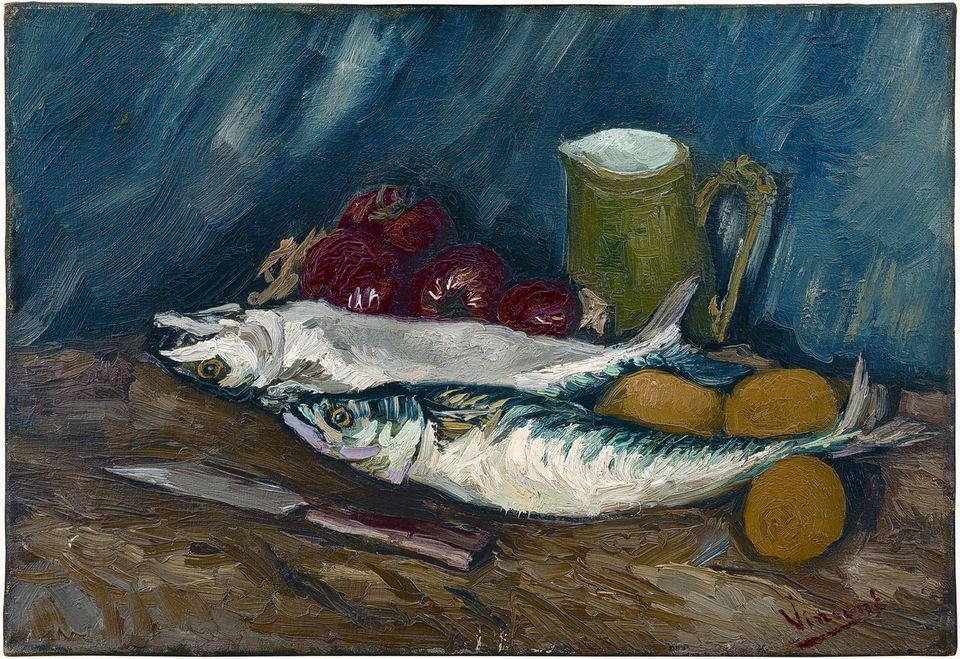 A painting of a pair of mackerels previously dismissed as a fake may now be accepted as an authentic Van Gogh. The Still Life with Mackerels and Tomatoes is at the Oskar Reinhart “Am Römerholz” Collection in Winterthur, near Zurich, which is open to visitors.

The picture had long been accepted as a Van Gogh, but was downgraded in the collection’s 2003 scholarly catalogue. The German Van Gogh specialist Roland Dorn argued in his entry that the brushwork and particularly the colouring are wrong for an authentic work, particularly the cold white and icy turquoise of the fish and the red of the tomatoes. The Reinhart collection therefore records the work as “formerly attributed to Van Gogh”, following Dorn’s suggestion that it is a “true forgery”.

News of its possible upgrading has just appeared in the catalogue of the current Van Gogh still life exhibition at the Barberini Museum in Potsdam (until 2 February 2020). Although not displayed in the Barberini show, the painting is included in an appendix that lists all the artist’s still lifes. 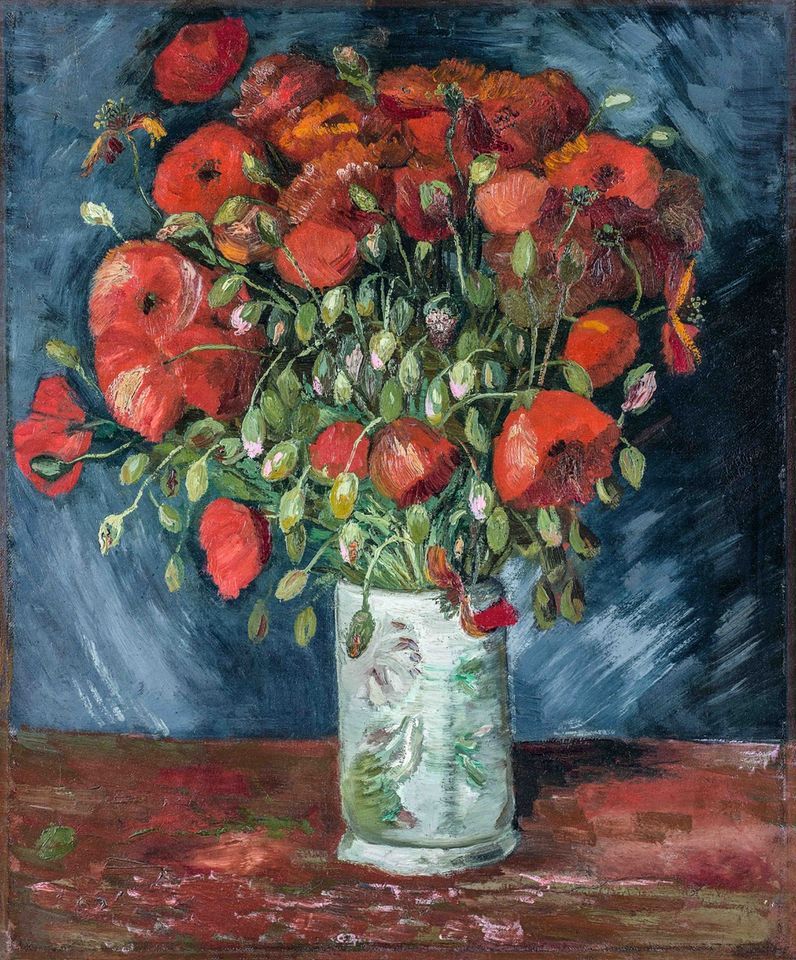 Oliver Tostmann, the curator of European art at the Wadsworth Atheneum Museum of Art in Hartford, Connecticut, points out in his essay in the Barberini catalogue that two previously downgraded Van Gogh still lifes with somewhat similar colouring have recently been reattributed to the artist. Vase with Poppies in his own museum and Vase with Meadow Flowers and Roses at the Kröller-Müller Museum in Otterlo are both now accepted as authentic works, painted by Van Gogh in Paris in 1886-87. 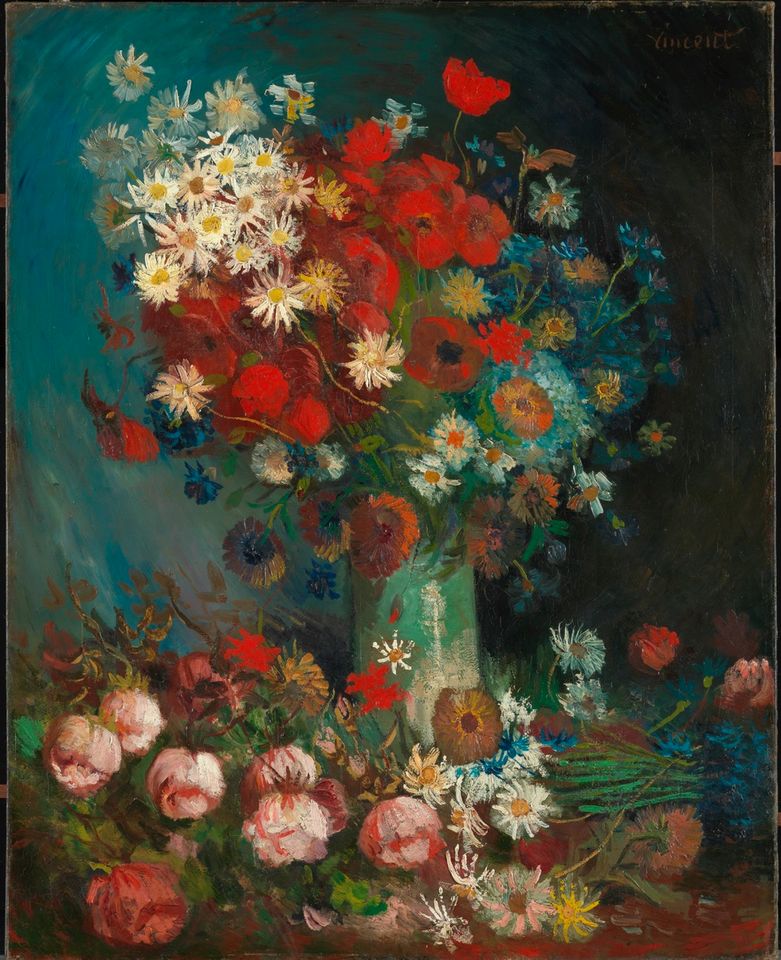 Tostmann comments in his essay: “With the recent reattribution of the Otterlo and Hartford paintings to Van Gogh, it is arguably time to rethink the attribution of the Winterthur [Reinhart] still life as well”. If authentic, Still Life with Mackerels and Tomatoes probably dates from 1886.

Another argument in favour of the authenticity of the signed Still Life with Mackerels and Tomatoes is its provenance. It is recorded as being with the Parisian dealer Ambroise Vollard in 1899. This was only nine years after Van Gogh’s death, which would have been very early for a fake, since his works were not yet fetching large sums.

Still Life with Mackerels and Tomatoes was bought in 1919 by the Winterthur collector Oskar Reinhart, whose family wealth came from trading in cotton and coffee. Following his death in 1965, the collection was bequeathed to the Swiss state and opened to visitors in his villa, Am Römerholz.

Kerstin Richter, the director of the Oskar Reinhart “Am Römerholz” Collection, tells The Art Newspaper that she is “interested” in the reattribution of the flower still lifes in Otterlo and Hartford and is “following the discourse closely”. The obvious next step would be to seek the views of the specialists at the Van Gogh Museum in Amsterdam on Still Life with Mackerels and Tomatoes.

What is certain is that Vincent loved the shimmering colours of mackerel. On his visit to the fishing village of Les Saintes-Maries-de-la-Mer in June 1888, he wrote to his brother Theo in great excitement about the sea: “The Mediterranean—has a colour like mackerel, in other words, changing—you don’t always know if it’s green or purple—you don’t always know if it’s blue— because a second later, its changing reflection has taken on a pink or grey hue.”

• In other Van Gogh news: the National Gallery of Victoria in Melbourne has bought the Yves Saint Laurent 1988 jacket inspired by Van Gogh’s Sunflowers. It sold at Christie’s, Paris, on Wednesday, fetching €382,000, considerably higher than the €80,000-€120,000 estimate. A gallery spokeswoman says that it will be “a highlight of our 20th-century fashion collection”.