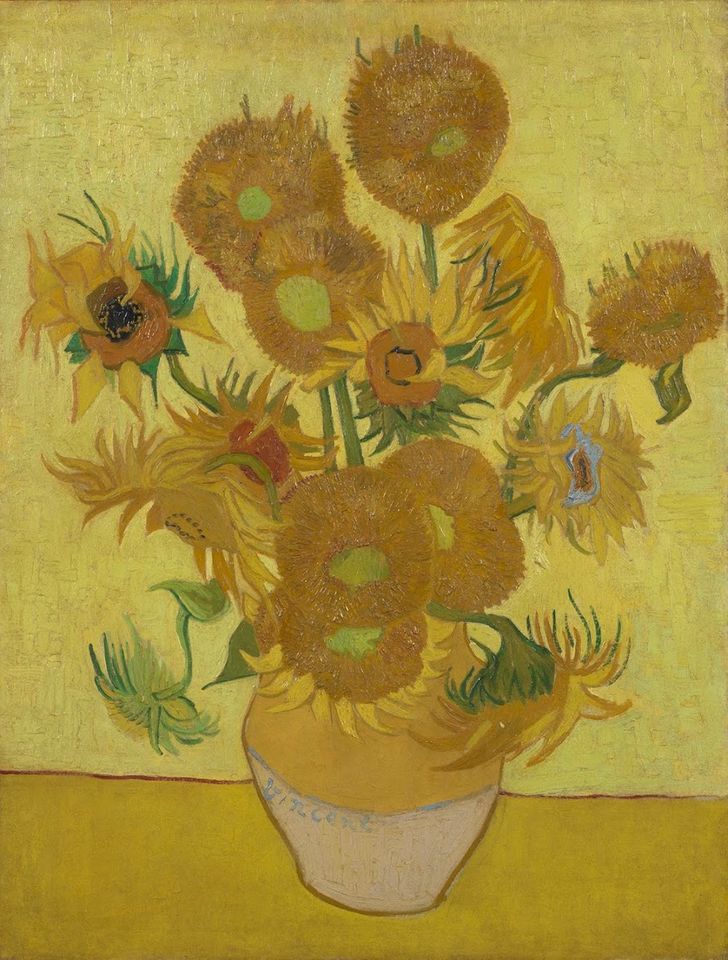 The Van Gogh Museum’s exhibition on its Sunflowers, which opens today, offers visitors a most unusual opportunity to see the back of the picture. This reveals a wooden strip which was added at the top of the stretcher, to extend the canvas and allow more space for the uppermost flower. The reverse of the painting is temporarily visible through a window on the back of the large stand on which the Sunflowers is hung, allowing visitors to see for themselves how the picture was slightly enlarged. 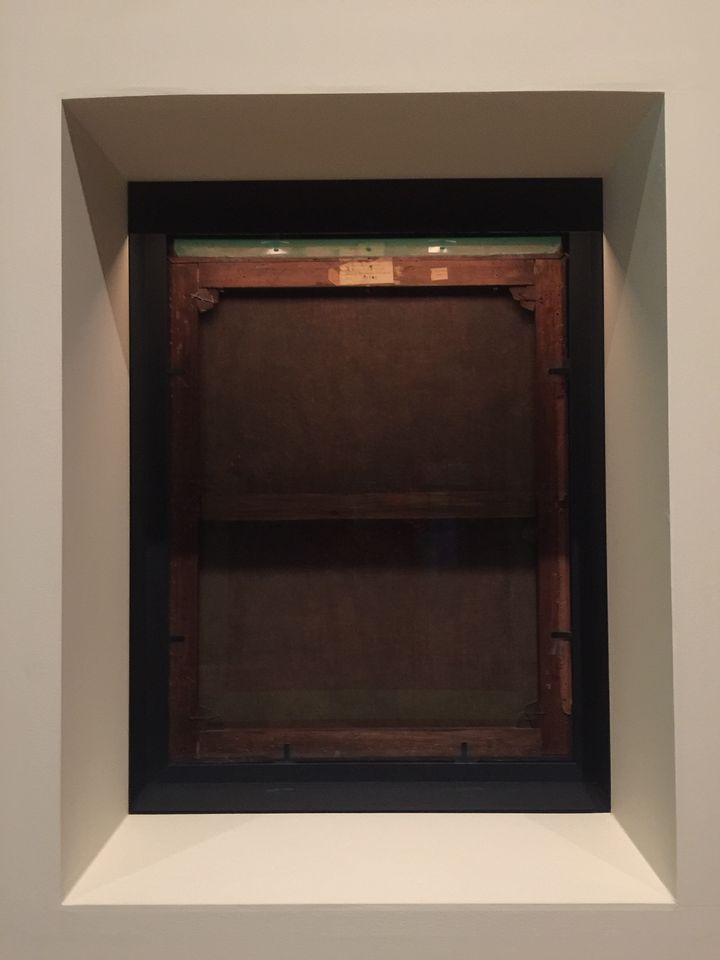 The reverse of the Amsterdam Sunflowers, with the added strip at the very top Martin Bailey

New research has confirmed that the 3.5 cm pine strip was added by Van Gogh, since the pigment is the same as those which he used and the brushstrokes above the join and are his. But what really comes as a surprise is the discovery that in 1961 the strip was temporarily removed by the conservator Jan Traas, disturbing the join, and it was then reattached with three long bolts. This was done when the painting was still owned by the Van Gogh family and before the creation of the museum in 1973.

As the exhibition catalogue explains, in the process of relining the painting Traas lifted off the wooden strip, which “broke the fillings and retouches across the join”. On replacing it, he attached it with glue and three long bolts. These bolts are nearly 10 cm long.

Traas kept no records of his restoration, so until the recent research the museum’s conservators had believed that the bolts probably dated back to 1927, when Traas had undertaken an earlier restoration. But it has now been established that the bolts were inserted in 1961.

During the 1961 restoration the wooden strip was reattached in a slightly different position, which means that it is now sunk back from the surface of the canvas by about 3 mm. This makes the join more visible to viewers.

Ella Hendriks, until recently the museum’s senior conservator, says that the 1961 work will have to remain: “As the former interventions by Traas can no longer be safely undone, or their consequences necessarily reversed, they must now be accepted as forming part of the history of the painting, significantly reducing options for re-treatment. Removing the added wooden strip that is now glued, nailed and bolted to the top edge of the painting, in order to correct its surface misalignment is not an option, as it risks damage to the original painting.”

The Van Gogh Museum’s exhibition is centred around its version of the Sunflowers, which is a copy or repetition which Van Gogh made in January 1889, a month after the ear incident, to present to Paul Gauguin (although this copy never reached him). When Gauguin joined Van Gogh in the Yellow House in Arles he had admired the original August 1888 version of the yellow-on-yellow Sunflowers, which had hung in his bedroom (it is now at the National Gallery in London).

Hendriks and her colleague René Boitelle recently considered whether the appearance of their Sunflowers could be improved by the partial removal of old, discoloured varnish. They concluded that this could not be done safely. Traas had relined the painting twice, in 1927 and 1961, and these two treatments mean that “there is no longer a clear physical boundary between the paint and the varnish on top in order to be able to separate the two”.

Since 1889 Van Gogh’s pigments, and particularly his chrome yellow, have deteriorated and the surface of the Sunflowers has suffered. Along with the discoloured varnish, this means that the Sunflowers has lost much of its brightness. For the exhibition, the Dutch artist Charlotte Caspers worked with the museum’s conservators in an attempt to recreate sections of the Sunflowers with their original, brighter colours. 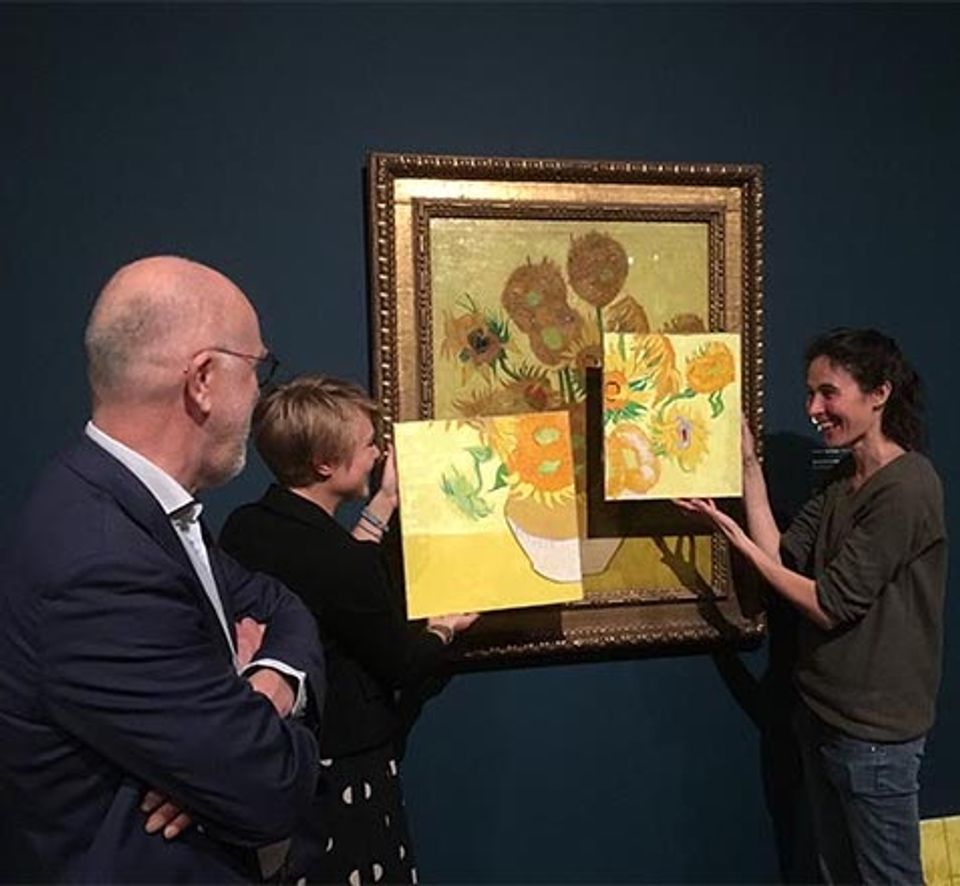 Little can now be safely done to bring back the intense quality of Van Gogh’s original work, but earlier this year minor retouching with reversible watercolours was done. However, the join where the wooden strip meets the canvas is still clearly visible and represents a slight distraction for viewers.

Hendriks and Boitelle also recommended that because of “the fragile, if stable, condition of the painting it will no longer leave Amsterdam”. This was announced on January within days of the news that the London version will be exhibited in Japan next year. Although the Amsterdam and London Sunflowers have had different conservation histories, it still may come as a surprise that their owning museums now have such different policies on allowing them to travel.