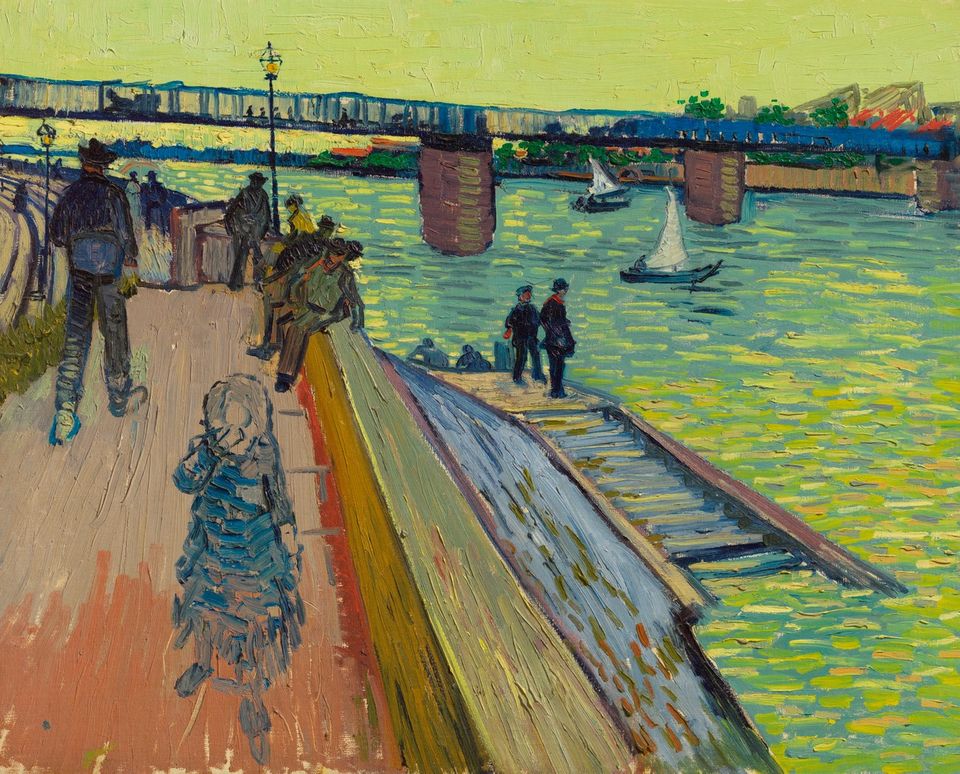 Christie’s is to auction Van Gogh’s Le Pont de Trinquetaille (The Trinquetaille Bridge) in New York on 13 May, with an estimate of $25m to $35m. This will be a rare opportunity to acquire one of the artist’s Arles pictures, his most sought-after period by collectors.

Painted in June 1888, it depicts the road bridge to the suburb of Trinquetaille, across the river from Arles. Van Gogh set up his easel on the quayside, just a few minutes’ walk from the Yellow House, the home that he would later share with Paul Gauguin. The riverside view was not far from where three months afterwards he would paint a nighttime vision, Starry Night over the Rhône (1888). 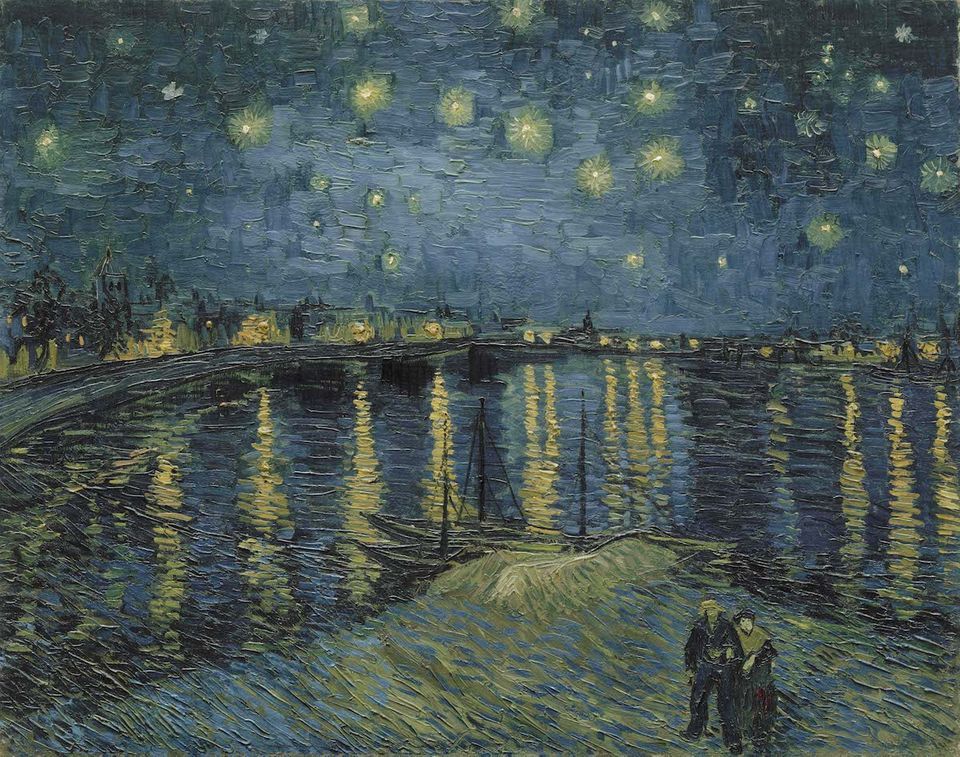 In Le Pont de Trinquetaille the young men lounging by the wall are described by Van Gogh as “ruffians of the Rue du bout d’Arles”. This was his euphemism for pimps, since Rue du bout d’Arles was the centre of the city’s red-light district. Six months later, Van Gogh would deliver part of his severed ear to a woman in this street.

The most mysterious element in Le Pont de Trinquetaille is the sketchily painted figure of the girl in the foreground. Her blue dress, composed of flicks of paint, gives her an almost transparent and rather ghost-like appearance. She lacks facial features and her right hand placed on her forehead is a pose suggestive of melancholia.

Van Gogh mentioned her in a letter he wrote in English to his Australian artist friend John Russell. Writing on 17 June 1888, he described “a dirty little girl I saw this afternoon whilst I was painting a view of the river with a greenish yellow sky”. Van Gogh called her a “mudlark”—a word that he presumably picked up while working as a young art dealer in London, when he would have regularly seen destitute scavengers by the Thames.

Enclosed in his letter to Russell was a small drawing of the mudlark, who probably received a few sous for posing. The sketch shows her dressed in decent clothes, rather than the rags she was presumably wearing. 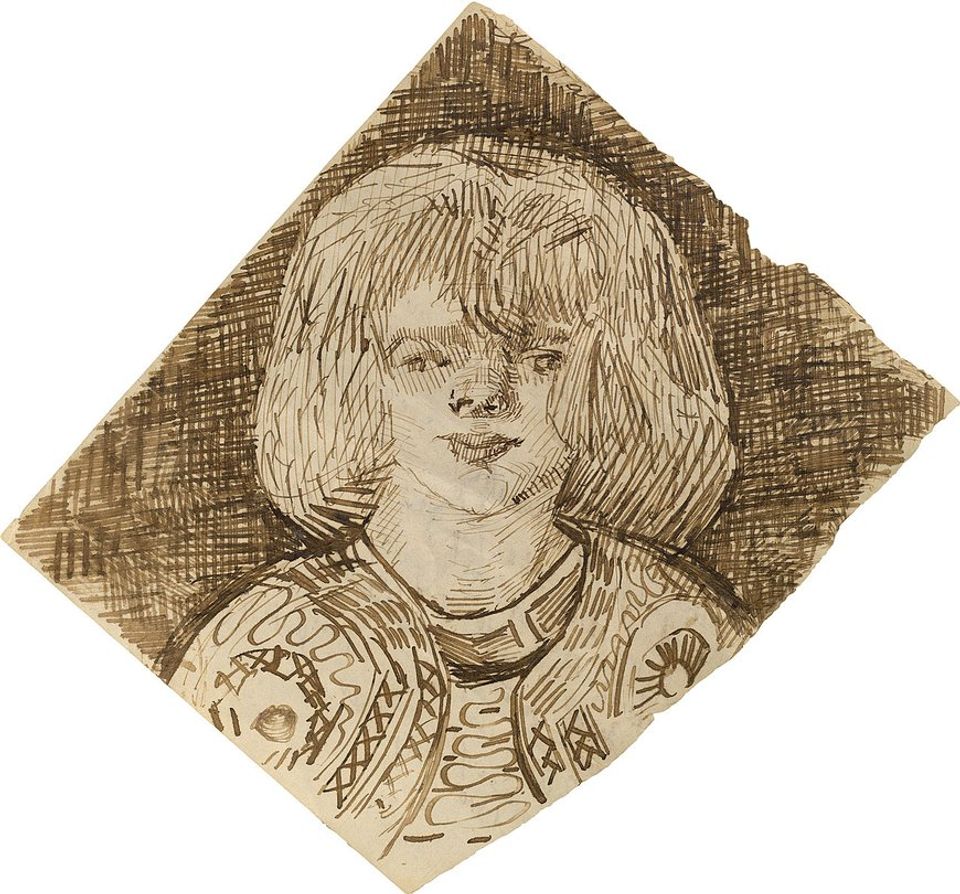 Le Pont de Trinquetaille is a dramatic work, partly because of its plunging perspective and high horizon—evidence of Van Gogh’s admiration for Japanese prints. Pleased with how the painting turned out, the following month he sketched it for his friend Emile Bernard. 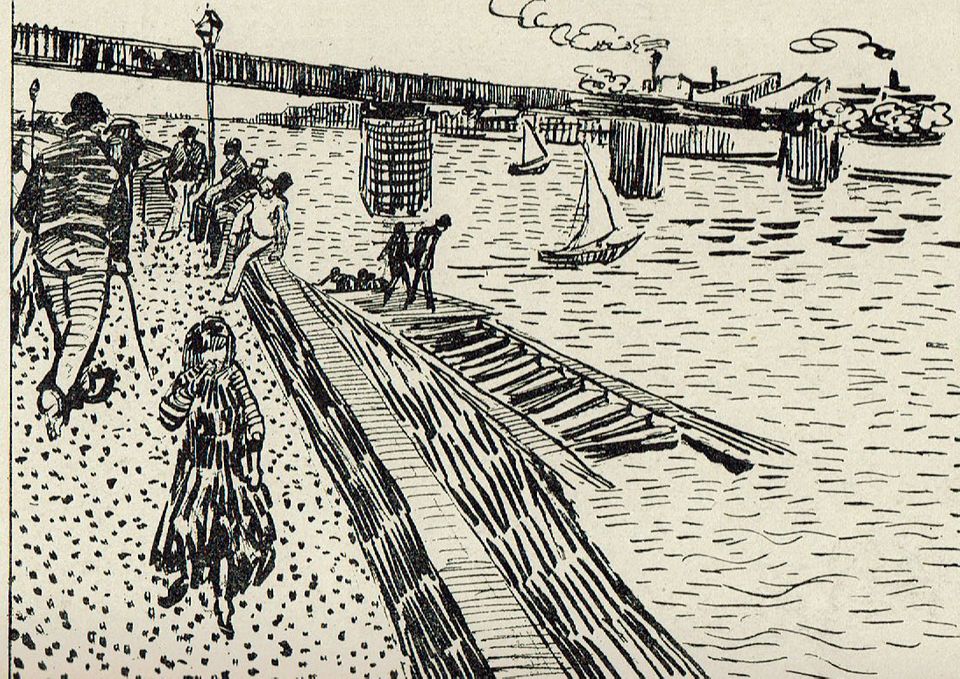 What is most striking about Le Pont de Trinquetaille is its colouration. Vincent described the effect to his brother Theo: “The sky and the river are the colour of absinthe—the quays a lilac tone, the people leaning on the parapet almost black, the iron bridge an intense blue—with a bright orange note in the blue background.”

The haunting effect is achieved by Van Gogh’s bold decision to paint the sky and part of the river a shade of green that evokes watered-down absinthe. It was a colour which the artist knew well from his Paris days, when he imbibed substantial quantities of this powerful drink.

A few days before the fateful evening when he slashed his ear, Van Gogh was in a café with Gauguin. According to Gauguin, his friend “ordered a light absinthe” and then “suddenly threw the glass and its content toward my head”. Gauguin managed to avoid the blow. Although his reminiscences are not totally reliable, this does suggest that Van Gogh was still partial to what was then known as “the green fairy”.

After Vincent’s death Le Pont de Trinquetaille was inherited by Theo and it was later bought by a Viennese lawyer. By 1923 it was in London, owned by Elizabeth Workman, the wife of a wealthy shipowner. Although never well known as a collector, she had avant-garde tastes, amassing works by Sisley, Degas, Toulouse-Lautrec, Matisse and Picasso. Workman sold her Van Gogh in 1928, when her husband’s company faced financial problems.

The next owner was Anna Eugenia La Chapelle, who had married the wealthy Montana politician and entrepreneur William Clark when she was 23 and he was 62. On his death in 1925 he was one of the wealthiest Americans of his time, giving Anna plenty of scope to collect.

Since the late 1920s the Van Gogh painting has been briefly exhibited on only five occasions: in 1934, 1948, 1962, 2000 and most recently in the Munch-Van Gogh exhibition in Oslo and Amsterdam in 2015-16. Van Gogh’s mudlark has some resonances to the admittedly more tortured character in The Scream, painted five years later, in 1893. Although Munch is unlikely to have seen Le Pont de Trinquetaille, the two artists lived in the same milieu, sharing ideas in common. 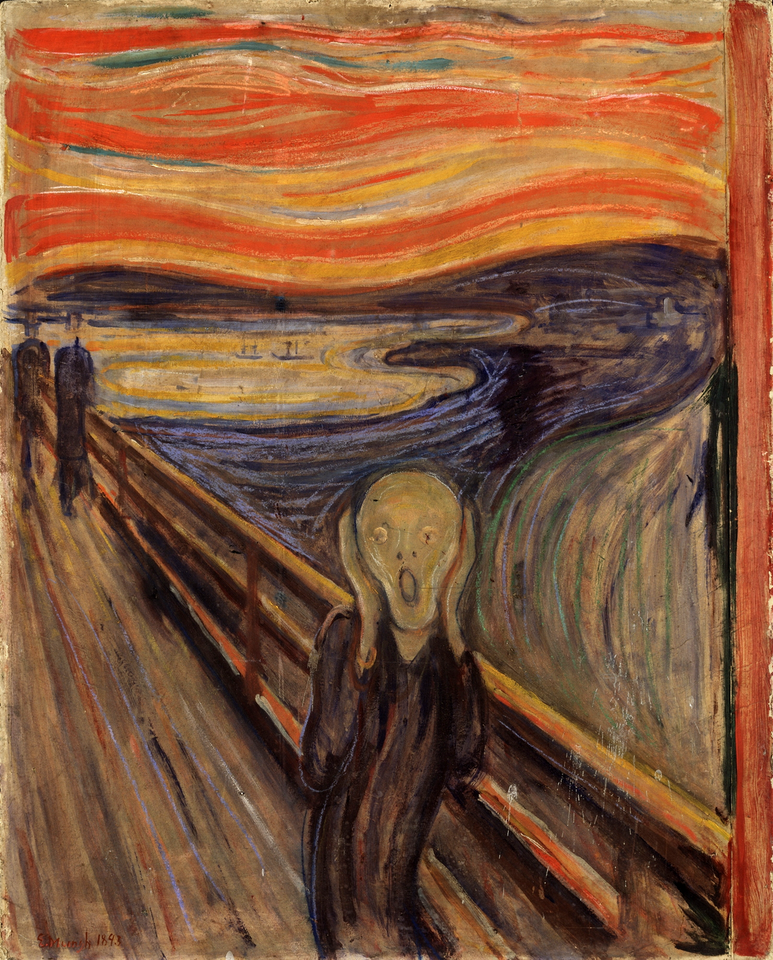 After a further succession of owners, in 1980 the Van Gogh painting was bought by Akram Ojjeh, a Syrian-born businessman who made a fortune acting as an intermediary in arms sales from France to Saudi Arabia. Ojjeh hung the Van Gogh in his office until his death in 1991.

Le Pont de Trinquetaille was then sold twice by Christie’s, in 1999 and again in 2004. Although anonymous, the buyer on the second occasion is believed to be the Israeli-born businessman Joseph Hackmey, who has a London residence. The painting has therefore graced the walls of two extremely wealthy figures on both sides of the Arab-Israeli divide.

And what about prices? When Ojjeh bought the painting in 1980 it was hammered down at $1.5m. In 1999 the buyer paid $15.4m (with fees), but five years later the price had fallen to $11.2m (with fees). With a trophy work at auction, the result depends on whether two potential buyers are fighting it out.

After the 13 May Christie’s auction Le Pont de Trinquetaille is once again likely to disappear into a private collection, quite possibly in East Asia. But because of the Clark connection the Detroit Institute of Art has already requested the riverscape for its exhibition Van Gogh in America, due to open in October 2022. It would be wonderful if the new owner is amenable to lending.