Art Basel diary: horseplay with Harry and Meghan and fairgoers prove it's never too old for swinging

Plus, bath time with a very young Jeff Koons 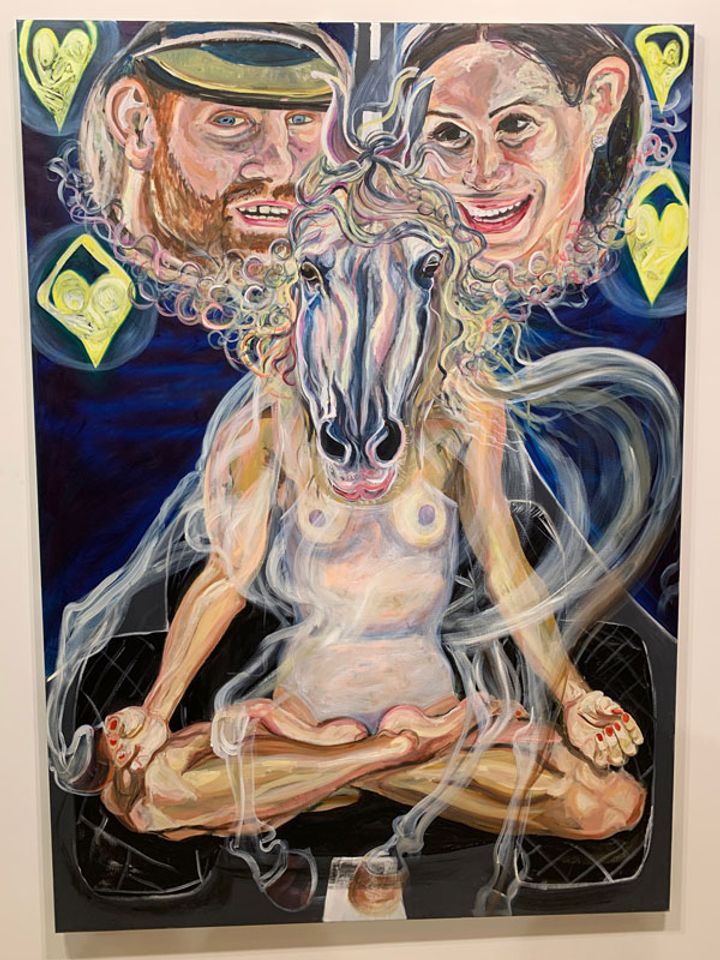 Jana Euler’s with and against all IT’s power (2019), depicting Harry and Meghan atop a naked female with a horse head © Gareth Harris

Horseplay with Harry and Meghan

Meghan Markle mania has reached Art Basel, courtesy of the artist Jana Euler, who has captured the Duchess of Sussex on canvas in a fetching piece called with and against all IT’s power (2019) at London’s Cabinet Gallery. The disembodied heads of Meghan and her dashing prince Harry are depicted floating above a naked female body adorned with the head of a horse. Passers-by seemed confused by the absurd assemblage of equine, royal and human figures. One visitor even went so far as to comment that “everyone looks horsey in that picture”—a rather harsh assessment of the superstar royal couple. 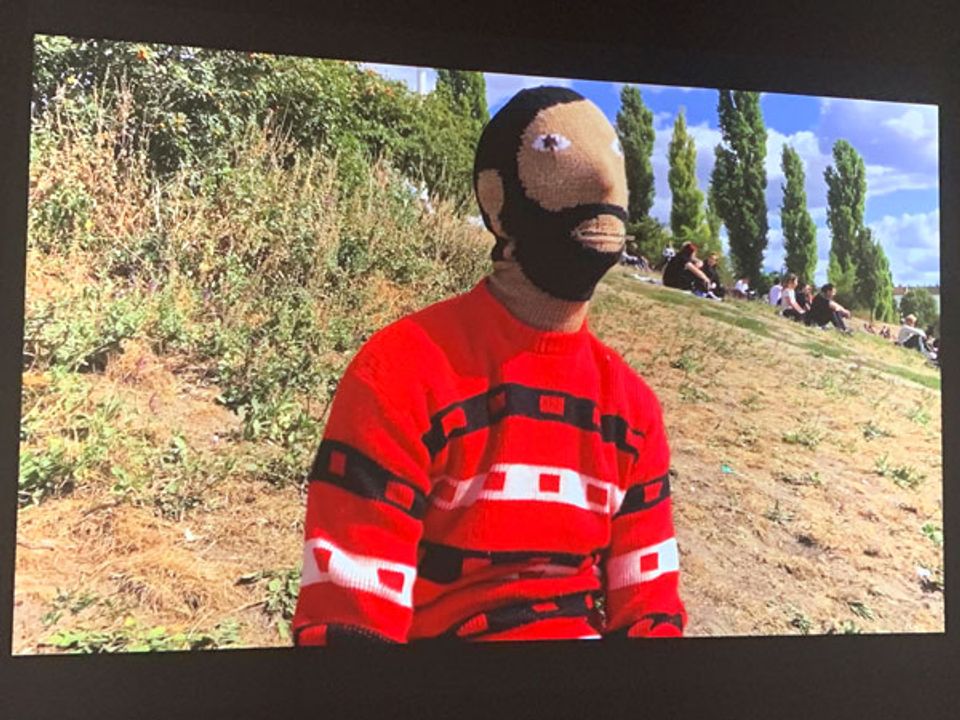 A film of Camouflage Pullovers in action Courtesy of Mark Brandenburg

Who knew knitwear could be so arty—and socially aware? Marc Brandenburg’s installation, Camouflage Pullovers (1992-2018), presented by Galerie Thaddaeus Ropac at Unlimited, comprises a set of sweaters with attached head masks and gloves (above). But these sweaters are more than just cosy apparel. “With each mask coming in one of four ethnicities/races—Caucasian, Asian, Arab or African—Brandenburg alludes to ongoing debates over racism and ethnic camouflaging, as well as to fashion’s function as a tool for either expressing, imitating or distracting from identity,” says a gallery statement. 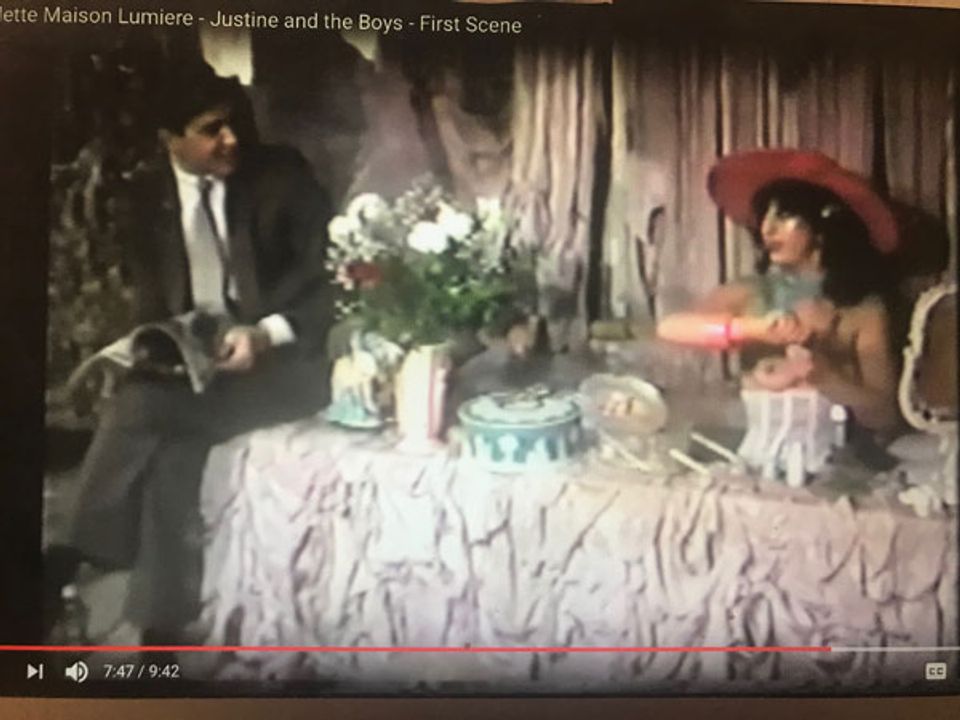 At Basel’s new June fair, just off the Messeplatz, a young Jeff Koons and Richard Prince pop up in Justine and the Boys (below), a surreal 1979 video with New York’s Mitchell Algus Gallery filmed by Robert Polidori, but directed and conceived by the artist Colette. A 24-year-old Koons sits on the edge of a bath looking bewildered as Colette, presiding over a male harem, plunges into the water topless. Who would guess he would become the world’s most expensive living artist? Koons’s Rabbit (1986) sold for a record $91m at auction last month. 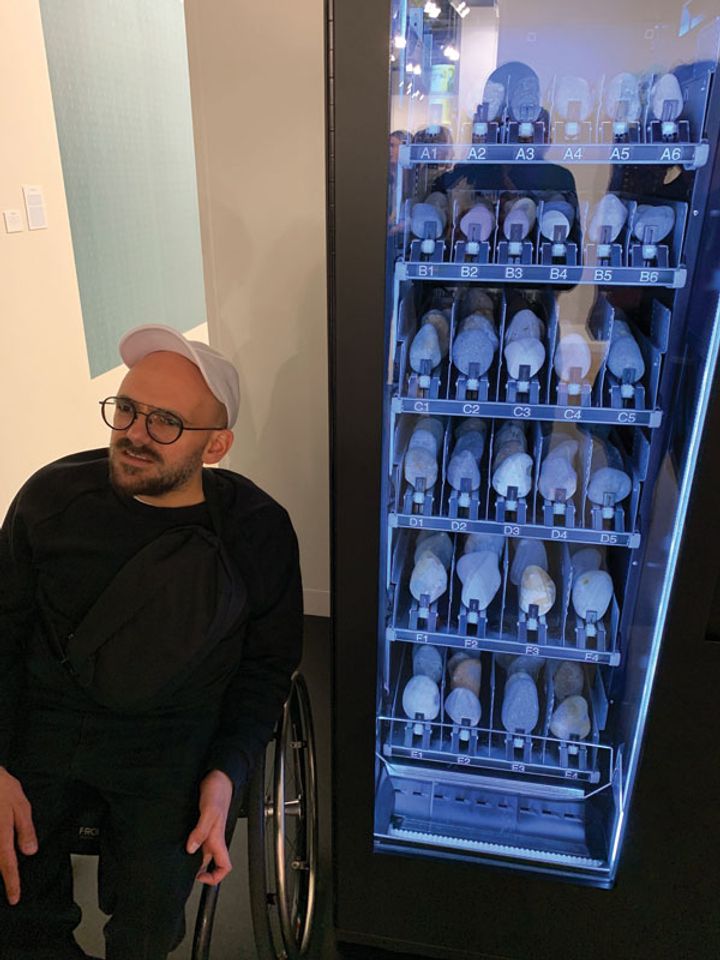 Ryan Gander in front of his stone-dispensing machine

You get what you pay for…

The UK artist Ryan Gander is showing a vending machine with a difference at gb agency’s stand at Art Basel. Almost all of the slots contain stones collected by Gander’s children on a beach near his home. But one slot contains a bundle of notes totalling €10,000. Each of the items is available to purchase for €9,999.99, but who will opt for the cash booty rather than the rocks? “With the stones, nothing is more valuable in terms of the economy of art; they took millions of years to make,” Gander says. But moneyed collectors at the fair may well plump for the wad of euros, which would at least buy a decent dinner in this pricey city. “Or a block of cheese,” Gander quipped. 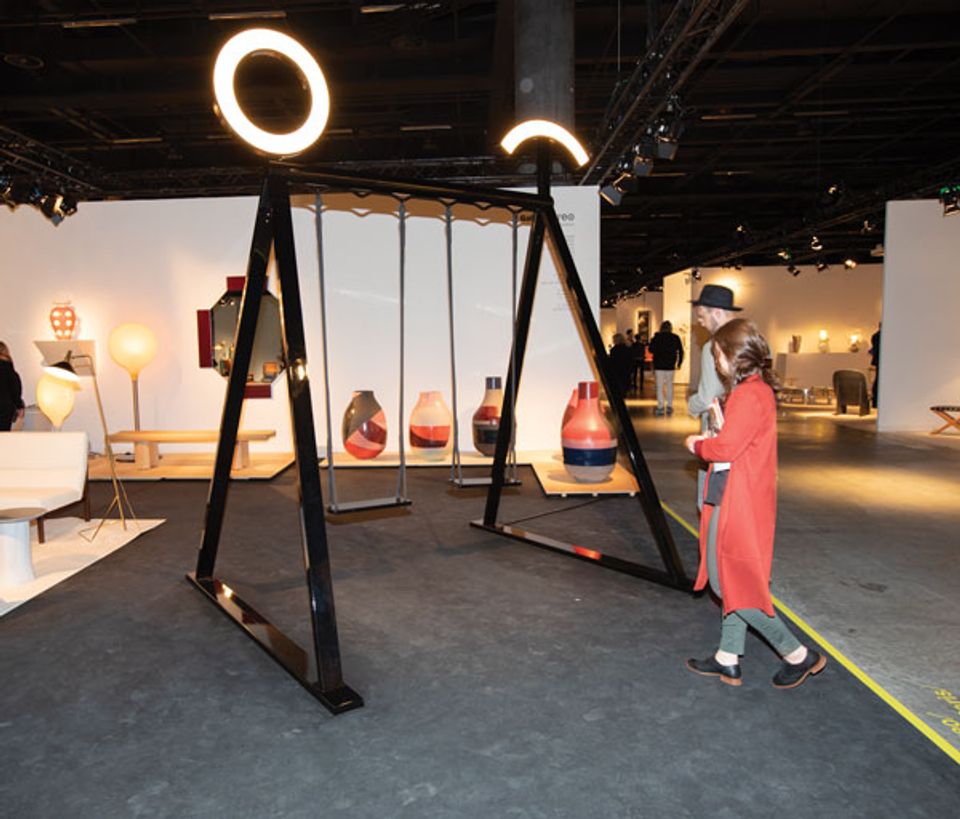 Never too old for swinging

This year’s Design Miami/Basel seems like a bit of a children’s playground-—from Ortamiklos’s vibrant papier-mâché-inspired furniture at Functional Art Gallery ($15,000-$45,000) to Floris Wubben’s ceramic works inspired by Play-Doh squeeze machines with Future Perfect ($5,000-$90,000). Over at Galerie Kreo, visitors were spotted getting into the swing of things on Stargate, a set of swings designed by Jean Baptiste Fastrez. The lacquered aluminium structure, available in an edition of eight, is designed for adults. At €54,000 apiece, it’s fair to say these are definitely toys for big kids.