Art Basel in Miami Beach diary: Buddhas on the beach, and police flag up art installation 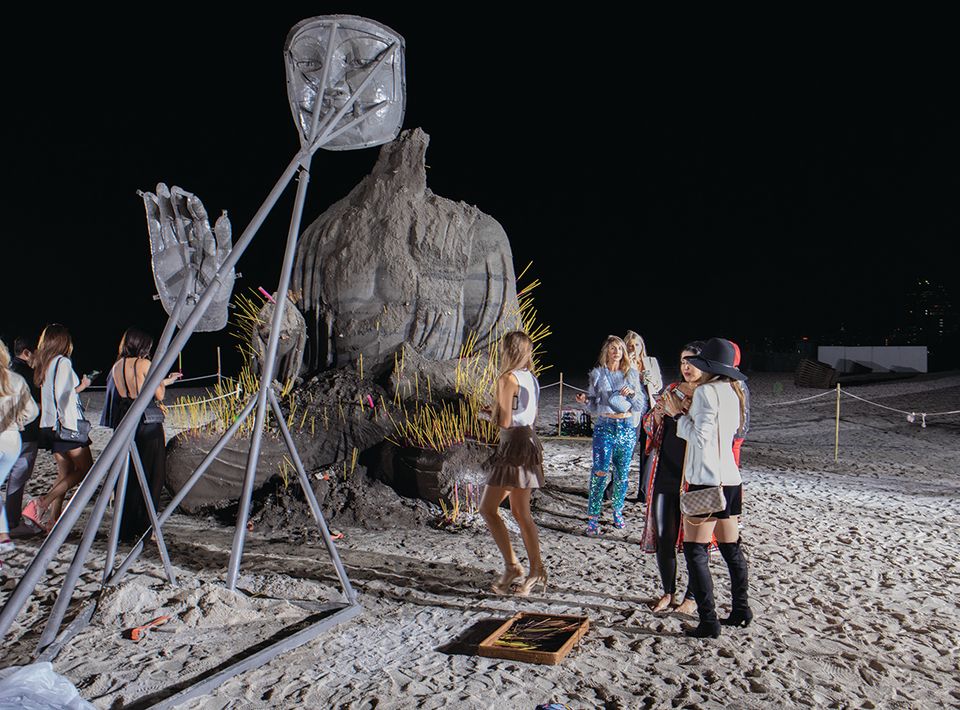 There was laughter in the air—and lots of floating ash—when two huge Buddhas were unveiled earlier this week on Miami Beach, marking the start of the annual Faena Festival. Visitors at the VIP preview were in awe of the Chinese artist Zhang Huan’s monumental deities made out of incense ash gathered from temples around China. But the winds were strong, carrying sand particles from one of the buddha’s faces into the mouths of well-heeled party guests, bringing on coughs and splutters. Alan Faena, founder of the Faena group, managed nevertheless to keep his trademark white shirt and slacks impeccably clean as one of the buddha’s heads was dislodged, tumbling into the sand. “This is just like the famous scene in Planet of the Apes when Charlton Heston finds the Statue of Liberty on the beach,” quipped one party-goer, bringing to mind the apocalyptic finale of the 1968 movie, “only better, and with canapés.” 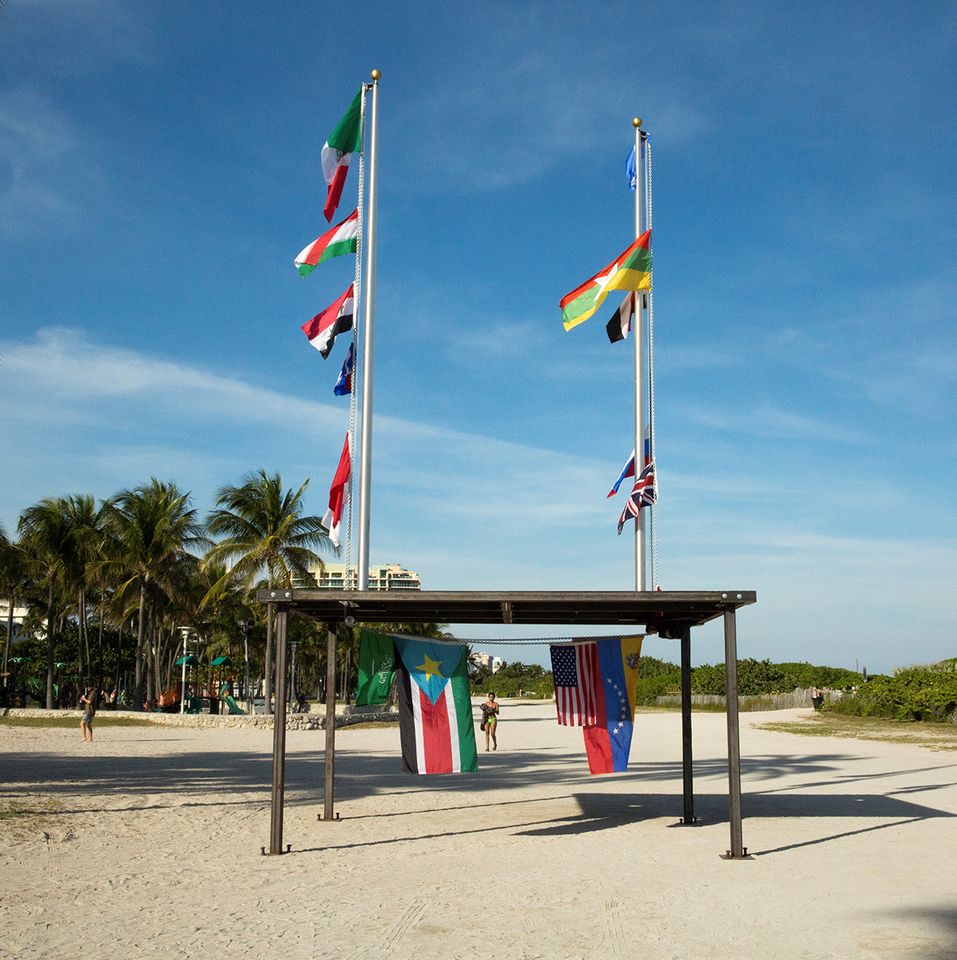 Flagged up: Wright and Millares's upside-down Stars and Stripes was not loved by everyone Photo courtesy of Antonia Wright & Ruben Millares

When flying the flag causes consternation

An upside-down American flag caused a stir on Miami Beach yesterday as police approached what was actually an outdoor sculpture by Antonia Wright and Ruben Millares at Untitled Art Fair. “They threatened to stop the piece,” Millares told us, but the Miami artists were able to convince the police that the First Amendment protected their right to hoist the inverted flag—regarded as an act of defiance. Alongside the Stars and Stripes, the artists have featured the flags of 15 other countries chosen based on migration levels affected by climate change, war and poverty. The banners are hoisted by a motorised chain between two flag poles, inverting as they descend. The police and the fair declined to comment on the matter. Wanting to avoid further altercations, the artists will keep the flag upright when they aren’t around to defend it. 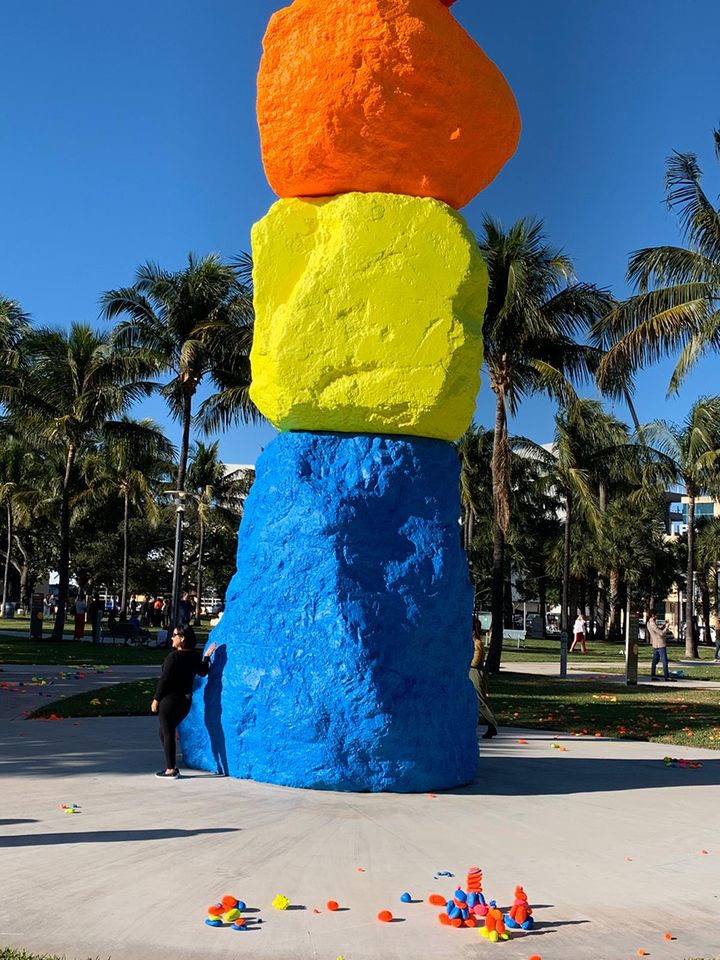 A ‘mini-me’ move on a Miami Beach landmark

There are copycats afoot. Ugo Rondinone’s fluorescent Miami Mountain sculpture in Collins Park has become a city landmark since its installation in 2016, attracting locals and tourists alike for Instagram pics set against its backdrop of technicolour boulders. But mini-me versions of the artist’s column of rocks are now springing up all over the park, thanks to the artist Marcela Sinclair, who is encouraging passers-by to build their own stacked structures from thousands of neon stones she has deposited in the grass. Sinclair’s Derrame (Spill), part of Art Basel’s Cities initiative, has prompted this flurry of tiny towers. It’s rumoured that one of our own writers may have built the first minuscule mountain, kickstarting this trend of teeny-tiny Ugos. 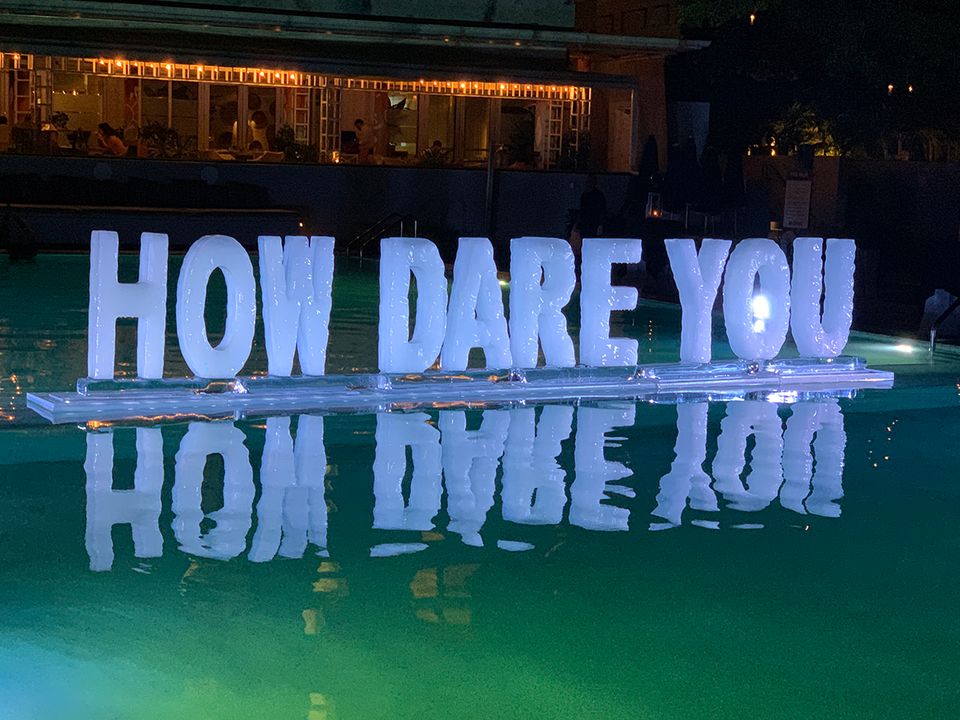 Teenage environmentalist activist Greta Thunberg would be moved by the Brazilian artist Rubem Robierb’s ice sculpture, which was unveiled earlier this week at the Shore Club on Collins Avenue. The piece reads “How dare you”, which comes from Thunberg’s impassioned speech at the United Nations in September when she blasted world leaders for failing to address climate change. Robierb’s sculptural work stood in the hotel pool, melting gradually as affluent Miamians quaffed cocktails and meditated on Florida’s climate crisis. (As sea levels rise, the US state may drown over the next half-century.) “I don’t usually do something this obvious,” says Robierb, who added that building the piece was “very stressful”. Greta is aware of the work, the artist added. Alas, the 16-year-old hasn’t seen the heartfelt icy tribute; she arrived in Lisbon by boat yesterday.