Art Basel in Miami Beach diary: fairgoers go bananas for 'The Banana' and Pope.L offers a message in a vessel

Plus basketball is slam dunk for art crowds and much more 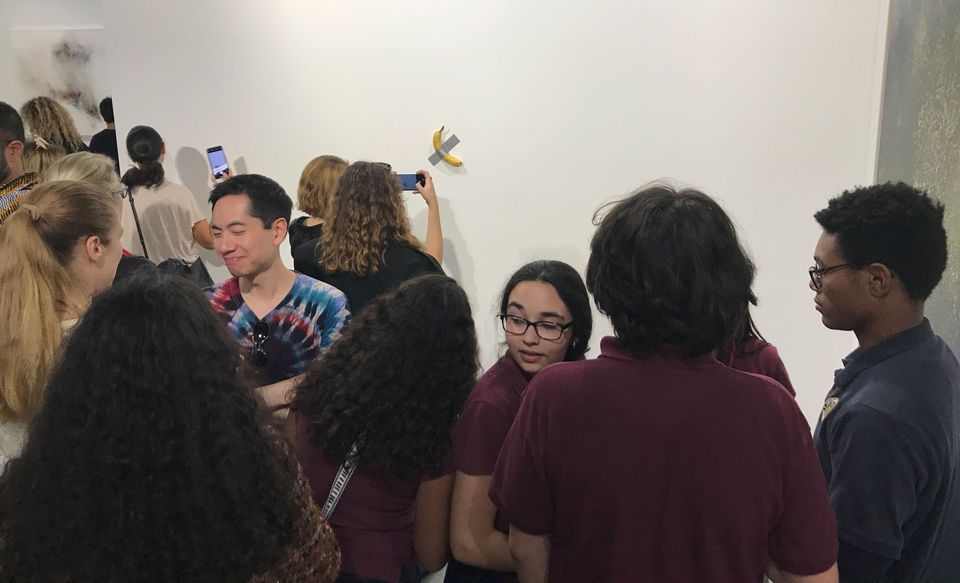 Miami has officially gone bananas. Since we broke the news that noted prankster Maurizio Cattelan is showing a banana duct-taped to a wall at Art Basel in Miami Beach the conceptual sculpture—priced at $120,000—has become a viral phenomenon. Media outlets from CNN to the New York Post and local news stations have fixated on fruity offering and crowds gathered around Perrotin’s stand eager to snap selfies with “The Banana”. The artist Juan Gonzalez and his wife Ramona from California came to see the work on Friday after hearing about it on TV. “I thought: ‘Oh my gosh, I have one of those in my refrigerator,’” Ramona said. “It’s so dumb, but so perfect and I love it—and I want it,” said Stephanie Rosa, a student from Miami’s Ferguson High School. When informed of the six-figure price tag, her friend Elvys Alonso yawped: “I could buy a house with a banana?!” But after learning that the editioned work had been bought by three different collectors, Rosa admitted that the piece gave her renewed confidence in her own work. “I’m always so worried about my art, thinking: 'What if nobody likes it?'” she confided. “Now, I for sure know there’s something for everybody.” Show me heaven: the best ticket in town during Miami Art Week

Where mallrats go to heaven

A derelict mall in downtown Miami is the edgy setting for artist projects this week. Empty storefronts along Flagler Street are decked with installations co-hosted by the arts centre Mana Contemporary, including a group show organised by the artists Cristine Brache and Brad Phillips. According to Brache, Mana told the artists that they could do whatever they wanted. The artist’s shop sells “tickets to heaven” for a mere $2, perhaps the most bang for your buck during Miami Art Week. Nearby, Rachel Rossin’s electric fans illuminate with LED displays reading “cool” and “take it easy”—a reminder of the exhibition’s chill mood. Upstairs, a group show with black plastic walls curated by the artist Matthew Tully Dugan had a more sinister look. And after a performance by Alex Bag simulating a security guard interrogating a shoplifter, the performers joined the audience to hang out together. The mallrats were in heaven. 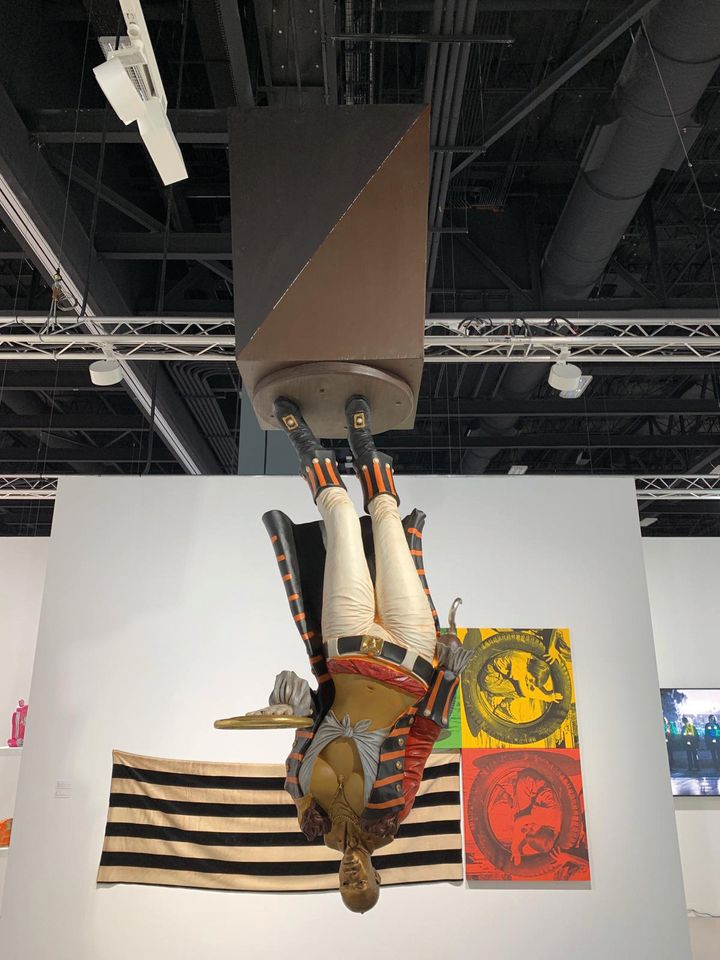 Pope.L offers a message in a vessel

A pirate wench with the head of Martin Luther King Jr hangs upside-down from the ceiling, her bosom partially exposed, on the stand of Mitchell-Innes & Nash at Art Basel in Miami Beach. The ghostly figure also leaks a chocolate substance mixed with the paint thinner Floetrol. Altogether, the statue A Vessel in a Vessel in a Vessel and So On (2007), by the artist Pope.L, is a comment on the toxicity of black stereotypes. The technician who installed the eye-popping creation says that the dangerous-if-consumed liquid seeps out for three seconds at a time. Best to seek refreshments elsewhere. 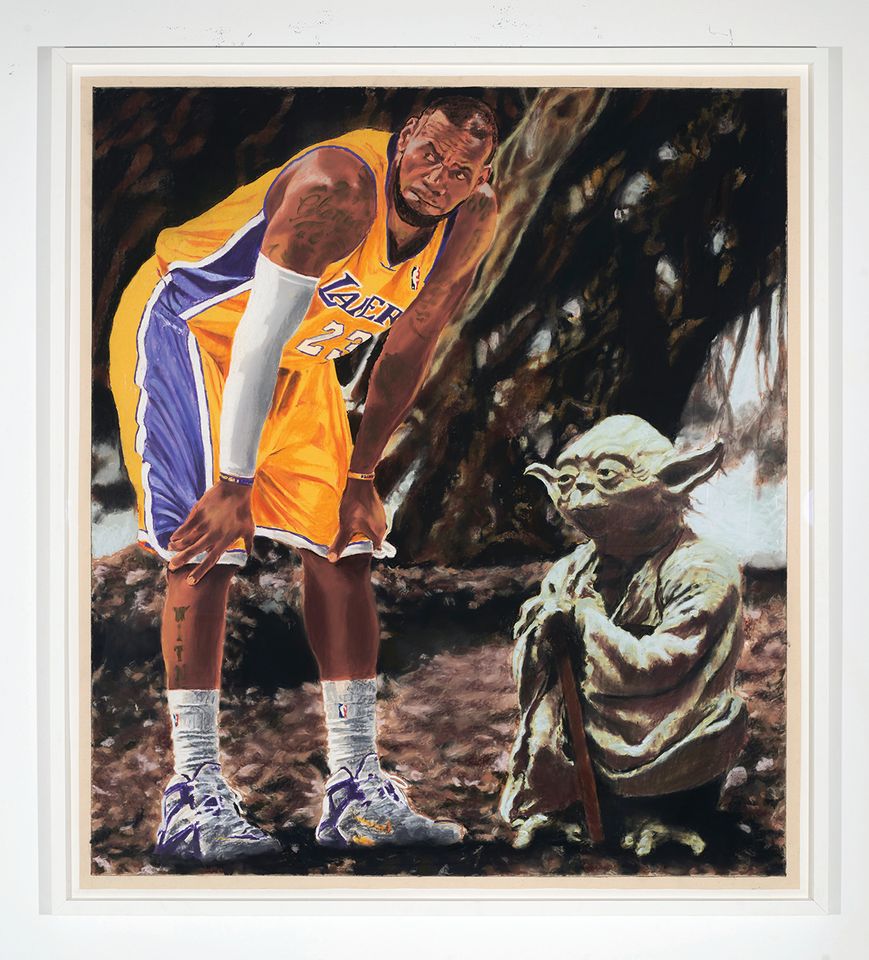 What do art and basketball have in common? Quite a lot if you asked the NBA stars involved in a new exhibition. The show is a partnership between the league and Franchise, a magazine dedicated to global basketball culture, which highlights work by artists including Eric Yanhker, Andrew Kuo and Devin Troy Strother. One of the magazine’s co-founders, Justin Montag, says he hopes to create a bridge between art and sport: “If someone comes because they love basketball and they find out about art, that’s a win.”

A room without a view

Who says service in Miami is underwhelming? A Spanish dealer at Art Basel Miami Beach tells us that his hotel, and its amenities, leave little to be desired. On requesting a sea view, the art world figure was surprised to find that there was, after all, no vista of the ocean from his room. “Can I ask why there’s no view on to the water?” the dealer politely enquired at reception. “But there is Sir,” was the response, “if you turn the wardrobe mirror slightly, you can see the sea. Voilà!”

For artists, coming to art fairs is like watching your parents have sex The UK artist and film-maker Isaac Julien

What do you need to make a work of art? Only an iron and some plastic bags. Hugo McCloud is a self-taught artist from California now based in Tulum, Mexico. He’s already sold four works, each made by ironing single-use carrier bags to wood panels, at the Sean Kelly Gallery’s booth at Art Basel Miami. How exactly does he make this unusual DIY assemblages? McCloud says that he meticulously cuts out bits of different coloured plastic bags to fit the design, sometimes with matching logos of the original image. Push Pull (2019) is an exemplar of his practice, showing two men trying to right a bicycle. An added bonus for any buyer is that bits falling off the work can simply be ironed back on if necessary. 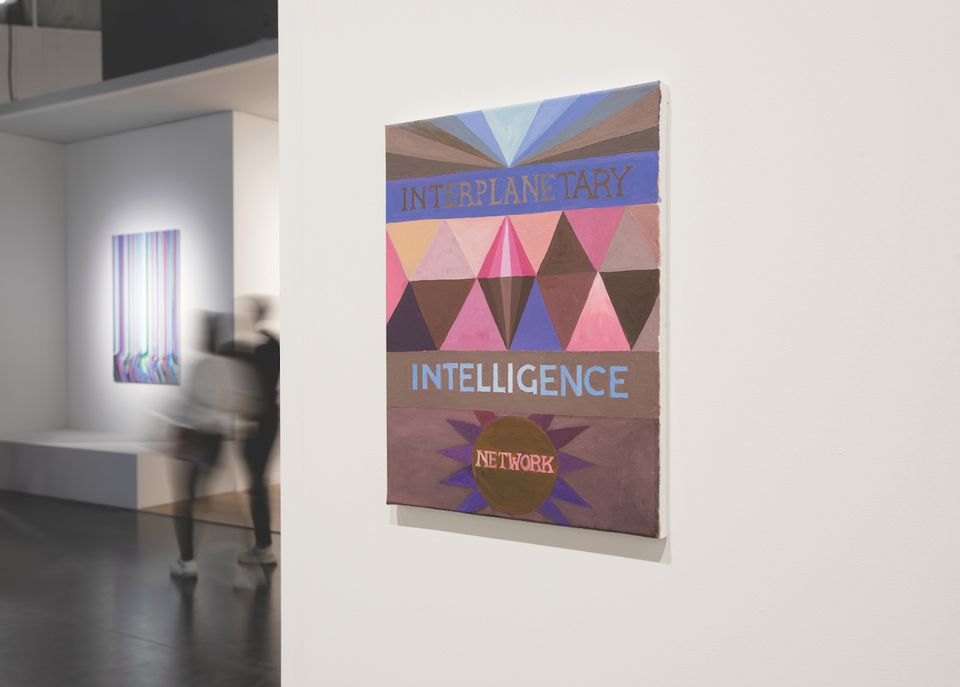 What is this, the Af Klint fair?

Although her record-breaking exhibition closed months ago, Hilma af Klint’s visions continue to have an immense impact on the art world. The spiritual abstractionist’s geometric forms and pale palette of colours were on display throughout Art Basel. “The stars must have aligned,” says The Art Newspaper’s deputy market editor and resident mystic Margaret Carrigan. “Scorpios like af Klint are notoriously crafty, after all.” There was a great number of artists on view channeling af Klint’s spiritual bent, including Patricia Fernandez at Commonwealth and Council, Suzanne Treister at Annely Juda and Sandra Vasquez de la Horra at Magazzino. “She has something violent inside her,” says gallerist Diletta Fenicia about the last artist’s spiritual sensitivities. The Chilean artist is showing mythological and black magic-inspired drawings coated in wax that resemble human skin. Seeing yourself in the styrofoam mannequins

Twenty-six life-size figures dressed for a swanky metropolitan bash are greeting visitors at the entrance of Art Basel in Miami Beach’s new Meridians section. The installation by Tom Friedman is a joy for film fans who might see some familiar faces among the Styrofoam mannequins. Co-presented by Stephen Friedman Gallery and Luhring Augustine, Cocktail Party (2015) features characters ranging from an aging waiter to an oddly-matched-but-embracing couple. Nearby is a pair of red slippers à la Dorothy Gale and what appears to be a tableau from the classic film, Breakfast at Tiffany’s, in which Audrey Hepburn lights a cigarette. It is like these pop cultural references have been put through a pithy blender. Is it a satire of the fêted Basel fairgoers? Party on, party people. Pink sloths have been sighted in Miami’s Design District this week. The rather unusual creatures were hanging from trees and arches throughout the neighbourhood. These pink sloths—lovable creatures that like to take things real slow—were created by the Mexican designer Fernando Laposse in collaboration with a community of 60 Mayan weavers in Sacabah, Yucatán. The jungle-dwelling mammals are made from tassels drawn from the fibres of the agave plant and coloured with red dye derived from cochineal, the insect that grows on the Upontia cactus. “The women who made the pink sloths, and the hairy sculptural hammocks also on show around the district, blessed the pieces before they came to Miami,” Laposse tells us. An esteemed 87-year-old community elder was among the weavers who helped fashion Laposse’s shaggy sloths and hammocks, giving them special dispensation before their Florida debut. Bringing the border to Basel

Harif Guzman wants you to empathize with the migrant experience. The artist is bringing to Miami Art Week the experience of “what thousands of immigrants face daily in their quest for a hopeful future and a better life”. Guzman hopes visitors will try and cross The Last Mile, his installation on show in the Little Haiti neighborhood, which emulates President Trump’s wall dividing the US and Mexico. The Venezuelan artist tells us that the work “represents the human that manifests his own destiny, carves his own name into the rock and becomes king by his own hand”. Old and new: the Miami Beach Convention Center carpet before (left) and after the renovation

As the week draws to a close, we like to ponder on what has set tongues wagging at Art Basel Miami Beach. The US-China trade war was on people’s minds while Maurizio Cattelan’s banana sculpture at Galerie Perrotin was a hot topic at $120,000 a pop. But the biggest bone of contention is the new carpet at the convention centre that seems to be especially distracting for visitors in the new Meridians section of the fair. “Some of it looks like a rug version of Munch’s The Scream,” said one unsettled guest at the VIP preview. Regular fair visitors will remember the previous carpet which was equally sublime. Which is your favourite?

Take a chance in Loewe

The trendiest folk in town descended on the Loewe store in Miami ‘s Design District earlier this week, clamouring to see Ewen Henderson’s classic ceramic pieces and Hilary Lloyd’s films and installations as part of the impressive annual Chance Encounters exhibition staged in the high-end boutique. Lloyd’s cascading white fabrics—draped around the 18th-century Portuguese granary permanently installed in the Miami store—are punctuated with indentations which, we are told, are glory holes (go look it up please). Jonathan Anderson, creative director of Loewe, explains why Lloyd’s work succeeds in the space. “It evokes the atmosphere of the places she explores through her films; in this instance she wanted to evoke the pleasure and decadence of Miami with the pastel colours and glory holes somehow conjuring the opposing extremes of the city.”