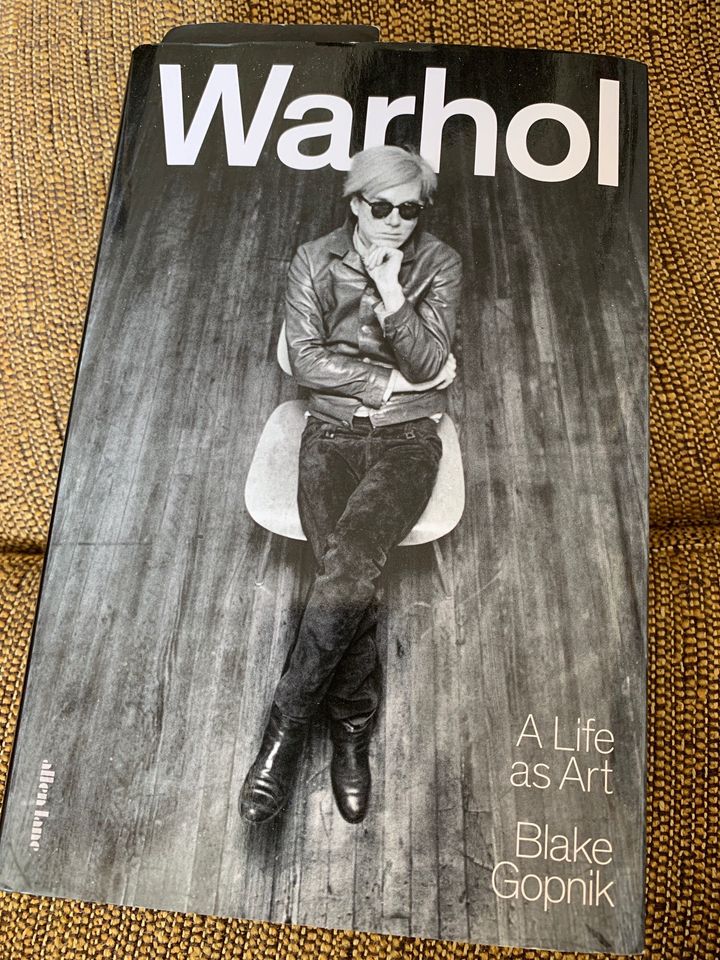 Warhol: A Life as Art by Blake Gopnik Gareth Harris

A new biography of Andy Warhol by Blake Gopnik (Warhol: A Life as Art, Penguin books) is full of fascinating nuggets about the elusive, enigmatic late artist whose Pop art masterpieces have seeped into the public consciousness. Earlier this week, Gopnik took part in a virtual festival on Twitter organised by Blackwell's bookseller, sharing 25 takeaways from the book which bust myths, revealing exactly what motivated Warhol. In one of the tweets, Gopnik says: “22/25 Docs show that #Warhol quietly collected the most challenging work of his era: idea-art by Joseph Kosuth; heavy-metal sculpture by Richard Serra; a radio-wave performance by Keith Sonnier; performance leftovers by Chris Burden.” In another post, the Warhol scholar says: “16/25: Myth: An assembly line of assistants made #Warhol’s Pop. Fact: His hands were on almost every piece, with a bare few helpers. His production was as artisanal as Rembrandt’s. The studio got named The Factory because it HAD been one, not because it still was.” Gopnik’s take on how Andy would have coped with today’s tech is especially telling. “One thing I can say for sure: Warhol would NOT have adored Instagram etc because everyone else already does! He always wanted to be out there ahead of the crowd! VR? Maybe…”

1. Warhol was baptized in a Byzantine Catholic church. But forget the claim that its altar screen was full of golden icons that “caused” his golden Pop Marilyns. Those icons came later. Photos from his day show Renaissance-style paintings in the church.

2. In 1941, @MuseumModernArt toured Picasso’s “Guernica” to Warhol’s native Pittsburgh, exposing Warhol, early, to his chief rival as Top Artist of the 20th Century. No wonder he went on to dress like the Spaniard.

3. Thanks to an amazing, short-lived gallery called Outlines—I’ve studied its scrapbooks—as a teen Warhol was already exposed to both Marcel Duchamp AND John Cage, two of the most important influences on his Pop Art.

4. #Warhol got an astounding education in the art dept of @carnegiemellon. Teachers’ course notes show that he was introduced to all the great modern artists and ideas. Also, thanks to a crowd of gay profs, to the idea that queerness and art might go together.

5. Coming out as gay in Pittsburgh was a NIGHTMARE. If the police “morals squad” didn’t beat and shoot you, they’d demand money to hide your “depravity.” No wonder #Warhol was never 100% out; no wonder being queer so shaped his art.

6. In 1949, when #Warhol moved to NYC, the sexual openness must have come as such a relief. He even played at gender bending, signing himself “Andie” and “Candy” in a crowd that sometimes toyed with drag. In college already he’d done a self-portrait as a girl.

7. In his first few mos in NYC, #Warhol shared a loft with the amazing dance pioneer Franziska Boas and the Lesbian activist Jan Gay. Boas’s pianist had been John Cage. Warhol learned the vie de boheme in that loft.

8. With his new illustrator's income, #Warhol bought himself a camp decor: bentwood chairs; Tiffany lamps. At that same moment, those were also being shown by the @MuseumModernArt as early modernist classics. Camp+modern=Warhol.

9. Myth: That #Warhol’s fine-art career began when he pioneered Pop in the 60s. Fact: He’d been showing art throughout the 50s. It just got ignored or panned because it was too gay for Eisenhower America. He came to Pop with the longest CV of any Popster.

10. In 1959, #Warhol did sets for Orphee by his gay hero Jean Cocteau, in a @barnardcollege production by two gay student thespians (and future stars) Michael Kahn and Terrence McNally (RIP). He used silver foil—a Pop trademark he’s not usu. given credit for.

12. A tall tale?: That #Warhol did his Marilyn paintings in response to Monroe's death in August of 62. No hard evidence for that, and we know he’d been fascinated by her well before. It was too good a tale for Warhol, the great fabulist, not to tell it.

13. One for true #Warhol wonks: Marilyn is supposed to be his first silkscreen of a solo celebrity, with Liz Taylor following later. But I found a letter from June of 1962 that already mentions a finished Liz. Trivia r’ us?

14. It’s an image fixed in our minds: #Warhol in leather and shades, making Pop Art in his Silver Factory. Except that almost all his important Pop came before he got the Factory (Jan. 1964) or the leather (Oct. 1965).

15. Myth: An assembly line of assistants made #Warhol’s Pop. Fact: His hands were on almost every piece, with a bare few helpers. His production was as artisanal as Rembrandt’s. The studio got named The Factory because it HAD been one, not because it still was.

16. #Warhol, supposedly asexual and unromantic, had two live-in lovers in the mid-'60s, then shared a home and a bed with one man for all of the '70s. He always wanted love and romance; for a gay man who came of age, and out, in the ’40s, both were hard to find.

17. It's said #Warhol only cared about money, but financials show that the move from illustration to fine art cost him income. His Pop sold badly, and the uncompromising Velvet Underground were at best a loss-leader. For $$, he should have promoted the Monkees.

18. Myth: Getting shot in June of 68 made #Warhol abandon the counterculture. Fact: By January, he’d already been making that move, with help from conservative acolytes Fred Hughes and Paul Morrissey.

19. When #Warhol moved his studio to clean digs on Union Square in Jan. of 68, he tried to drop its Factory moniker, since that name was tired and no longer apt. I’m with him on that: I try never to use the term after Dec. of 67.

20. We talk about "Pop artist Andy Warhol," but "conceptual artist" is a better tag. By the end of the 60s, #Warhol was making full-blown conceptual/relational art: Sending friends to Paris—as art; saying his business was art. Even his Pop had been conceptual.

21. Docs show that #Warhol quietly collected the most challenging work of his era: idea-art by Joseph Kosuth; heavy-metal sculpture by Richard Serra; a radio-wave piece by Keith Sonnier; performance left-overs by Chris Burden, the artist who had himself shot.

22. From 1972 on, almost of #Warhol’s silkscreening was done by others. He rarely touched any screen that mattered. That makes him a better, smarter artist, not a worse one.

23. My opinion (shared by critics of #Warhol’s era): His “sold-out” celebrity and society portraits were self-consciously vacuous—each one a component in a critical group portrait of a vacuous social class. Each celeb becomes a flavor of Campbell's Soup.

24. #Warhol’s final, much-touted “soup-kitchen labors” were initiated by someone else, and consisted of serving a few meals on a handful of holidays, in a Protestant church that he barely knew. Not good deeds but his art make him my patron saint.

One thing I can say for sure: Warhol would NOT have adored Instagram etc -- because everyone else already does! He always wanted to be out there ahead of the crowd! VR? Maybe...

about 4 hours ago
Number one priority: NASA will give designers $35,000 for a toilet that will work on the moon