Brexit and big fish at the Bombay Beach Biennale

Another biennial has sprung up on the art world circuit—but this event is kept under wraps and off radar, with only a select few aware of its location and timetable. The Bombay Beach Biennale, dubbed the anti-Burning Man, is an annual three-day event held in the resort town of Bombay Beach on the eastern shore of the Salton Sea, an artificial lake in California’s Coachella Valley. “The Biennale, founded in 2015, transforms abandoned housing, vacant lots, and decaying shoreline into a unique canvas for creative expression,” according to a project statement.

UK designer Lara Hoad is behind the "British pavilion" entitled Enough Rope (To Hang Yourself) which was unveiled at the fourth edition late last month. Hoad says the cubed work is “an interpretation of the Union Jack. Seen as the flag from one viewpoint, it starts to breakdown and deconstruct as one moves around it. The installation hints at the potential outcome of a divided nation in crisis.” Zurich-based Urs August Steiner’s kinetic installation, entitled S01E03 Refuelling, is part of a long-term project called Non-Crystal; the new work explores “the desire for immortality”, he says, referencing cryonic projects in the Arizona desert whereby bodies are frozen for possible future resuscitation. Supporters of the so-called Swiss pavilion include the swissnex San Francisco organisation and Swiss Arts Council Pro Helvetia.

Artist Sean Guerrero’s Da Vinci piece, a giant flying fish sculpture, draws attention to the Salton Sea. The lake is now evaporating and shrinking, increasing the salt content of the water (the fish population has largely died out and an egg-like stench can pervade the air, which is not very nice). 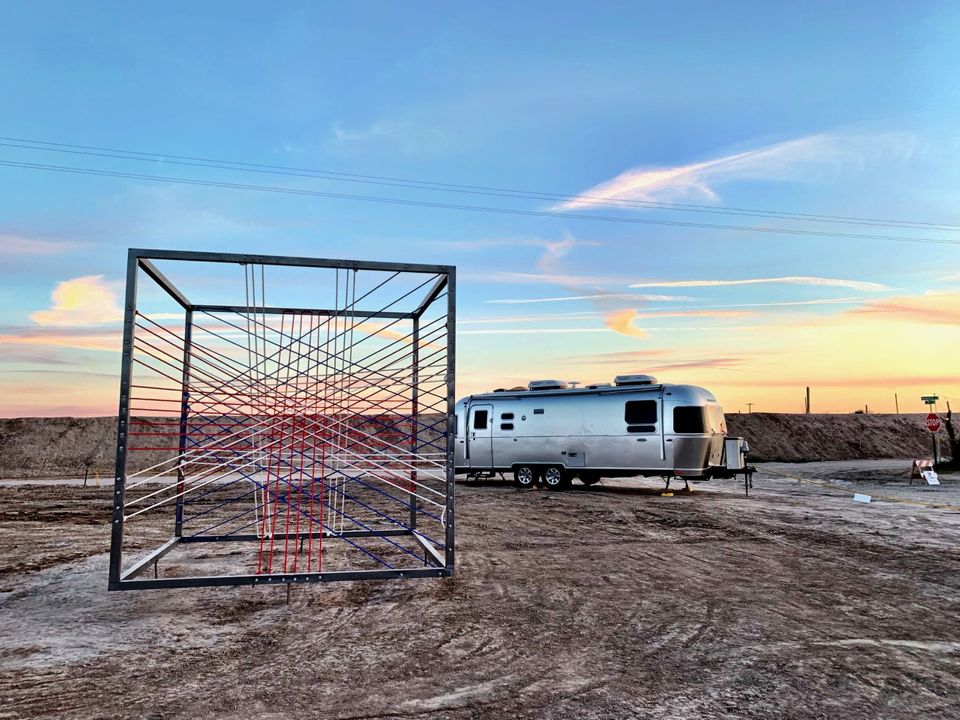