Camping out for Camp 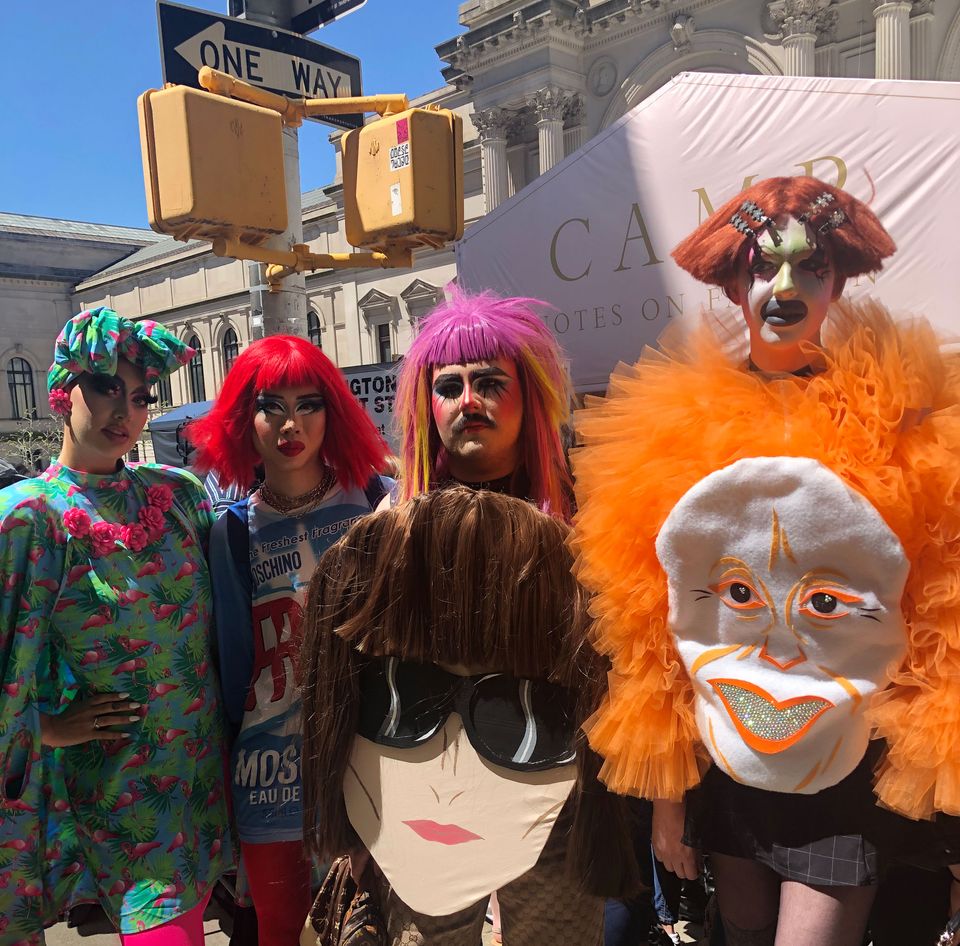 Four friends who took a bus down from Toronto had the best lewks among the onlookers Photo: Victoria Stapley-Brown

Even before the journalists and photographers descended upon the Metropolitan Museum of Art this morning to see the Costume Institute’s spring exhibition Camp: Notes on Fashion, which opens to the public on Thursday, fans of style—as well as Harry Styles—were camped out opposite the Fifth Avenue museum, anxiously awaiting tonight’s Met Gala red carpet.

A group of friends celebrating a birthday, the 17-year-olds Emily, Becca and Lauren from Florida, and 20-year-old Karen from California, had arrived at 5am. “We’re skipping school for this!” one gleefully confessed. When we asked who they were here to see, an enthusiastic chorus of “Harry Styles!”—a gala co-chair—rang out, followed by Shawn Mendes and Justin Bieber. “Not Lady Gaga?” we asked, about another of the event's co-chairs. “She’s great and all, but not Harry Styles,” one of the girls answered. [Ed: Sacrilege!]

“I just hope the men don’t disappoint,” one said about their expectations for the red carpet, adding that they'd like to see male attendees wear “something more feminine, break out of their comfort zone”, including makeup and dresses. 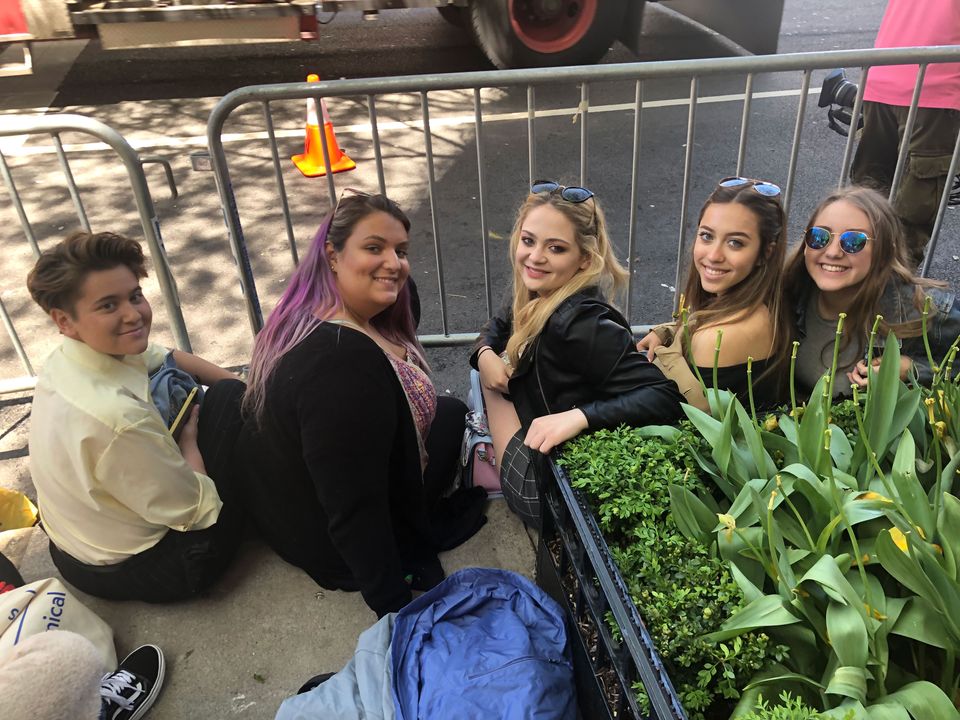 Another nearby group, Elizabeth, Tyler, Elle, Felicia and Nicole from Louisiana, Colorado and New Jersey, aged 17 to 19, were also excited to see Styles’ style. (And Lady Gaga, Tyler said.) They had only arrived at 10am and did not have a designated bathroom spot yet. “I might just not eat,” one said. We reminded them of the importance of hydrating—and sunblock. 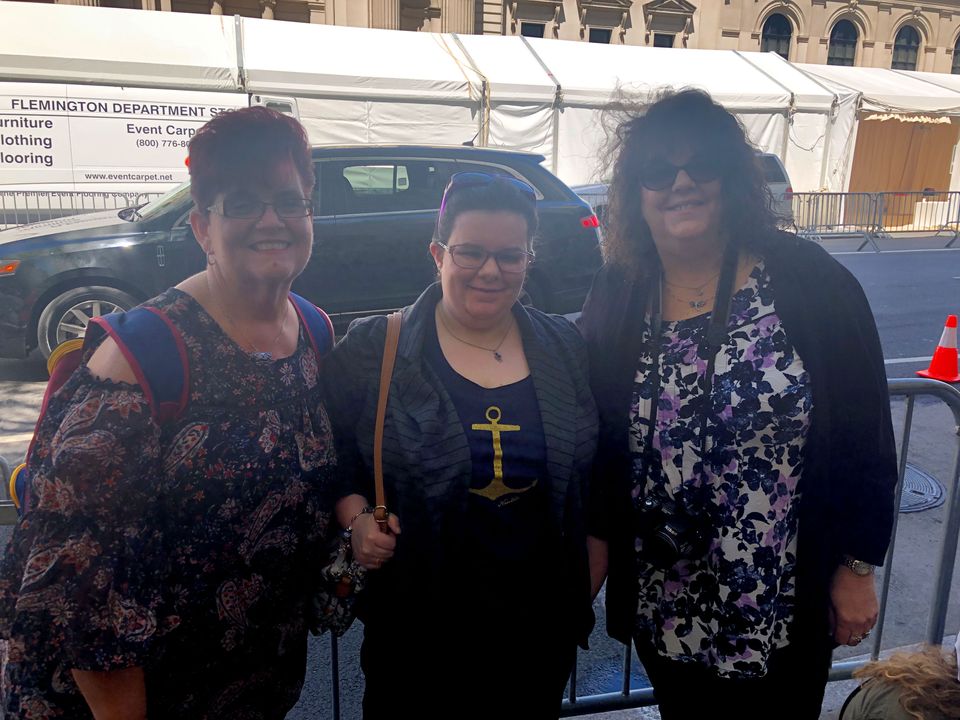 Girls' trip: Allie, one of many Harry Styles fans, came with her family, Karen and Lauren Victoria Stapley-Brown

Allie, on “a girls’ trip” from Ohio, with her mother and aunt, Karen and Lauren, was also excited to see Styles, although her mother and aunt named Lady Gaga and Serena Williams, another co-chair, as the celebrities they were hoping to catch a glimpse of. Karen, a hairstylist, said she was also looking forward to the fashion and hair-styles.

A block down, Fifi, who is also from Ohio but is a “sometimes” New Yorker with an apartment around the corner, was a den mother of sorts for her fellow Gala-gazers and had brought some sturdy wooden folding chairs she was happy to share. “Boy, you’re asking the wrong person,” she said when we wondered who she was most excited to see. “I’m going to do you a favour, because I’m dull,” she added, leading us to a younger group, who came from Chicago for their first-ever New York trip. “Ladies!” she called to them. “They have questions and I don’t know how to answer them!”

The girls responded, naturally, that they were there for Harry Styles—followed by Gaga. “And who was the nicest person here?” Fifi followed up. “You, because you let us sit on your chairs,” they correctly answered. “We’re kind of forming a community right now,” the campers added. 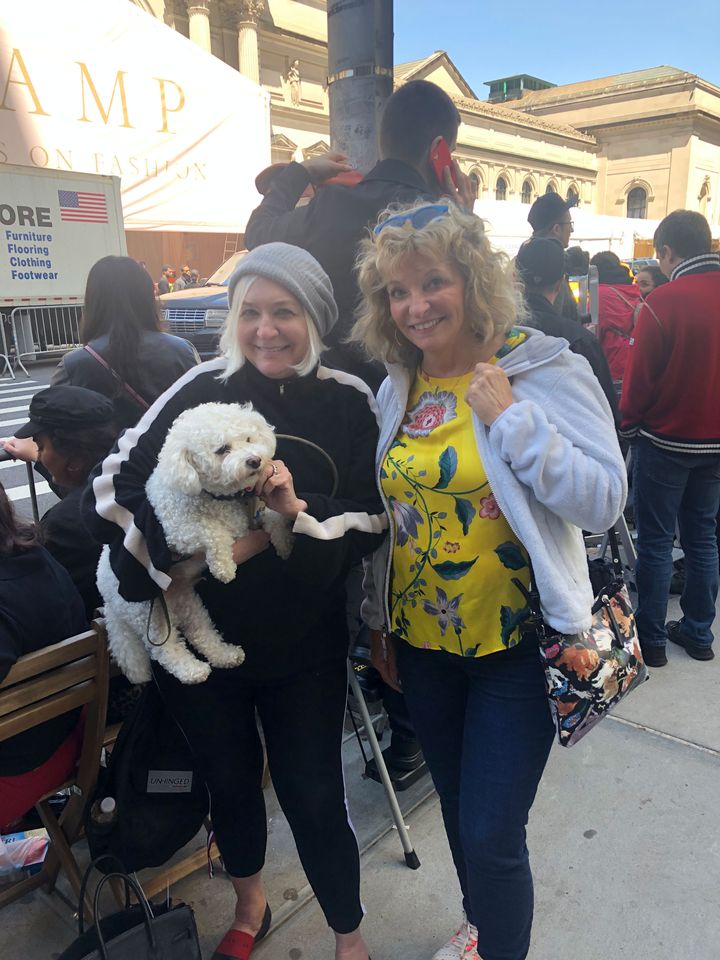 “There’s just such a swell of excitement that you can feel it, and it’s so much fun,” said Fifi, whose friend and former colleague, Tate, and little dog JJ were joining her. This is the third time she has set up chairs on Fifth Avenue and waited to watch the event. Last year she went successfully celeb-spotting at the nearby Carlyle Hotel Bar after the gala.

A group of friends who had taken the overnight bus from Toronto—Tash, Kasper and Uglyy—were the spectators with the best lewks, dressed in drag. “We just got here [at noon], but we’ve got big heels so that’s fine,” Tash said—clearly talking about their vantage point, and not comfort. Uglyy and Kasper were honouring Vogue’s editor Anna Wintour and artistic director Grace Coddington respectively. “You always need some Grace,” Kasper said, although she worried: “I’m not sure I got her hair right, it should be bigger.” We assured her the likeness was fantastic.

We also guessed, correctly, that they were most looking forward to seeing Gaga. “Gaga’s my mom, yeah,” Tash said of Mother Monster. When we said that most groups mentioned Styles before Gaga, and suggested it might have been an age thing, Tash said, “Or just like… a straight thing. Queer scale!”

Tash was more excited overall for the clothing than the celebrities, but of Gaga’s possible outfit, she said: “We think she’s either gonna do something absolutely massive, or something very simple—there won’t be any in-between. And I thought it would be just as good honestly, if she walked out in something that was so simple and so clever and so funny, it would just be perfect.” After all, camp is about subversion and irony—and what would be more surprising than a pared-down Lady Gaga among over-the-top peacocks?