During the last weeks of Van Gogh’s life he got to know an Australian artist who had spent most of his life in Japan. Until very recently Edmund Walpole Brooke remained an enigmatic figure, but the Japanese Van Gogh specialist Tsukasa Kodera has now tracked down one of his watercolours. It was bought in April for $45 by an American couple.

The watercolour’s lush landscape includes a woman in a kimono carrying a baby on her back as she leaves a traditional Japanese house. As reported in the New York Times, it was purchased by Katherine and John Mathews of Scarborough, Maine. They bought it at Warehouse 839, a shop run by Kevin Keraghan in nearby Saco that sells second-hand furniture and collectables.

Keraghan acquired the painting about 15 years ago from an estate in Ossipee, New Hampshire—from a family that had moved from southern California. Brooke had two brothers in California, so this represents a potential link with the artist. Edmund Brooke’s Japanese landscape with a mother and child hanging in the dining room of Katherine and John Mathews's home, May 2021 Courtesy of John Mathews, Scarborough, Maine

Katherine bought the watercolour, simply because she liked it, to hang in their dining room (it has subsequently been moved). She investigated the signature and this led her to Kodera, a professor of art history at Osaka University who has been researching Brooke. 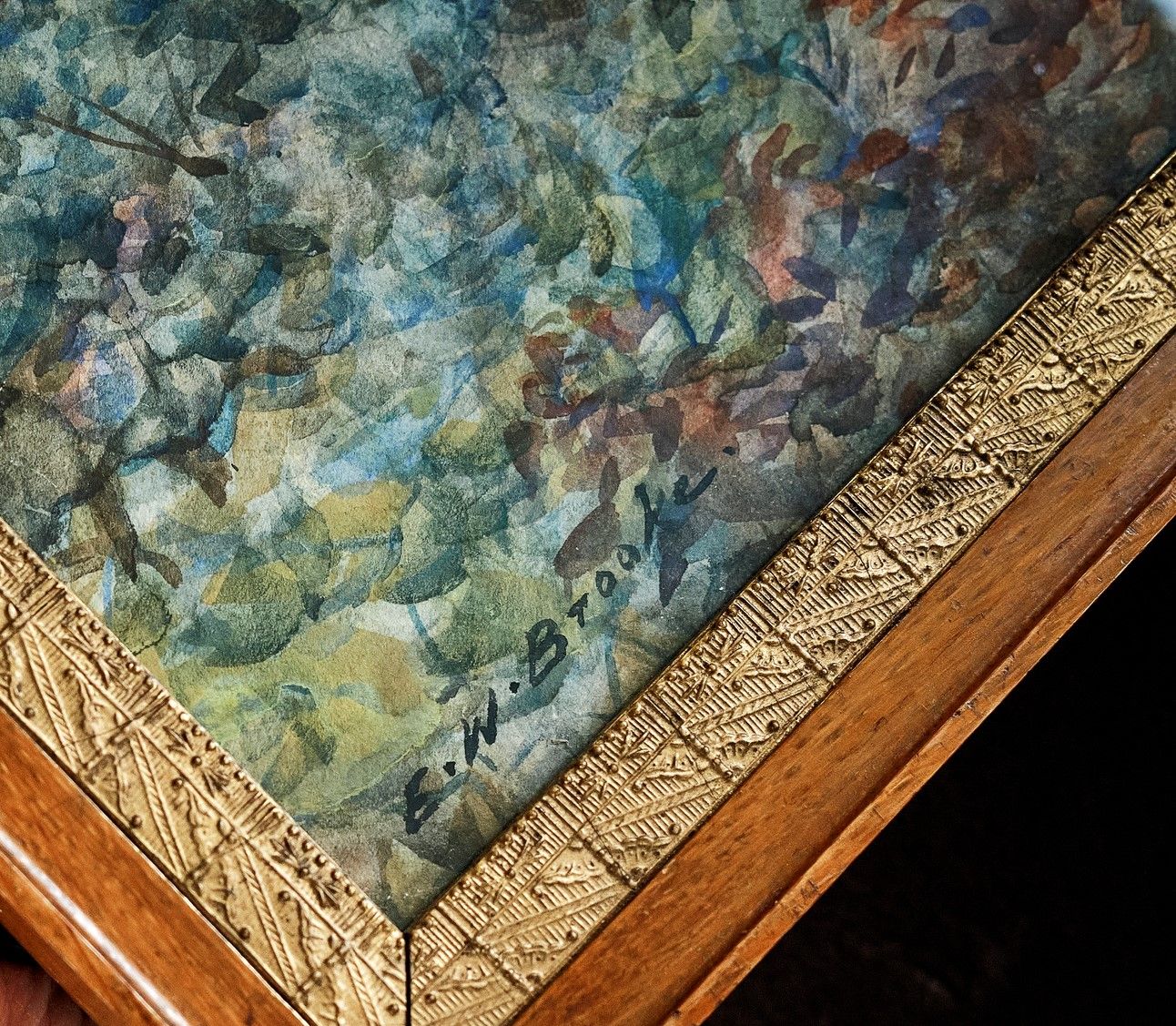 Edmund Brooke’s signature in the framed Japanese landscape with a mother and child Courtesy of John Mathews, Scarborough, Maine

Kodera believes that it is highly probable that the watercolour is indeed by Vincent’s friend. As he explains: “It is signed ‘E.W. Brooke’ and is of a Japanese subject. But more research is needed to be absolutely sure.”

Only one other Brooke painting has been identified by Kodera: a Japanese garden scene with a woman feeding chickens. It was sold some years ago by the Redfern Gallery in Laguna Beach, California, and then disappeared into a private collection. Just a small photograph is known and the picture bears close similarities with the watercolour in terms of subject matter (its signature is barely visible).

So who was Brooke—and what was his link to Van Gogh? Born near Melbourne in 1865, Brooke’s English parents moved to Yokohama, near Tokyo, when he was four. His father was a journalist on an English-language newspaper in Japan.

In Edmund’s late-teens he set out to become an artist, probably studying under the Yokohama-based English illustrator Charles Wirgman (the creator of a Japanese version of Punch). In 1885 Brooke set off for Paris to study art, eventually being taught by the highly successful painter Jean-Léon Gérôme.

During the spring of 1890, when Van Gogh was living in the village of Auvers-sur-Oise, Brooke (then aged 24) was there to work and the two men met. Vincent informed his brother Theo in early July: Brooke “has been here in Auvers for months, and we went out together sometimes [to paint], he was brought up in Japan, you would never think so from his painting.” Presumably Vincent meant that Brooke’s style was quite unlike that of Japanese prints.

Vincent, a great admirer of Japanese art, would certainly have quizzed Brooke about life and culture in Japan. Brooke must have been one of the few people he met who had spent most of their life in Japan. Vincent was less enthusiastic about his friend’s paintings, which he described as “rather lifeless”, although “he does observe nature”.

Apart from a couple of references in the Van Gogh correspondence, the only other documentary evidence of Vincent’s links with Brooke is a business card, which was discovered tucked into one of Vincent’s sketchbooks. Brooke probably left the card when he visited Theo’s apartment in January 1891 to see Vincent’s paintings. 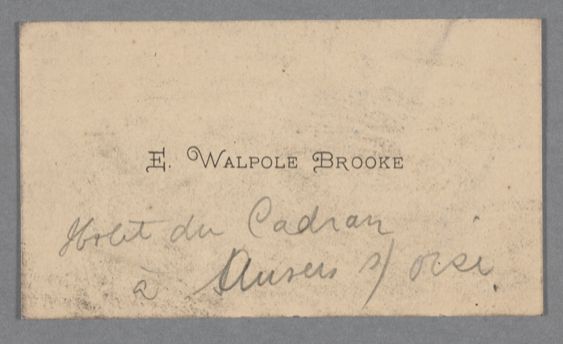 The business card includes Brooke’s handwritten note of his address in Auvers-sur-Oise: the Hotel du Cadran (its restaurant survived until just a few years ago). Although the handwriting is rather different from Brooke’s signature on the watercolour, artists’ signatures on paintings are often stylised and different from their normal handwriting. 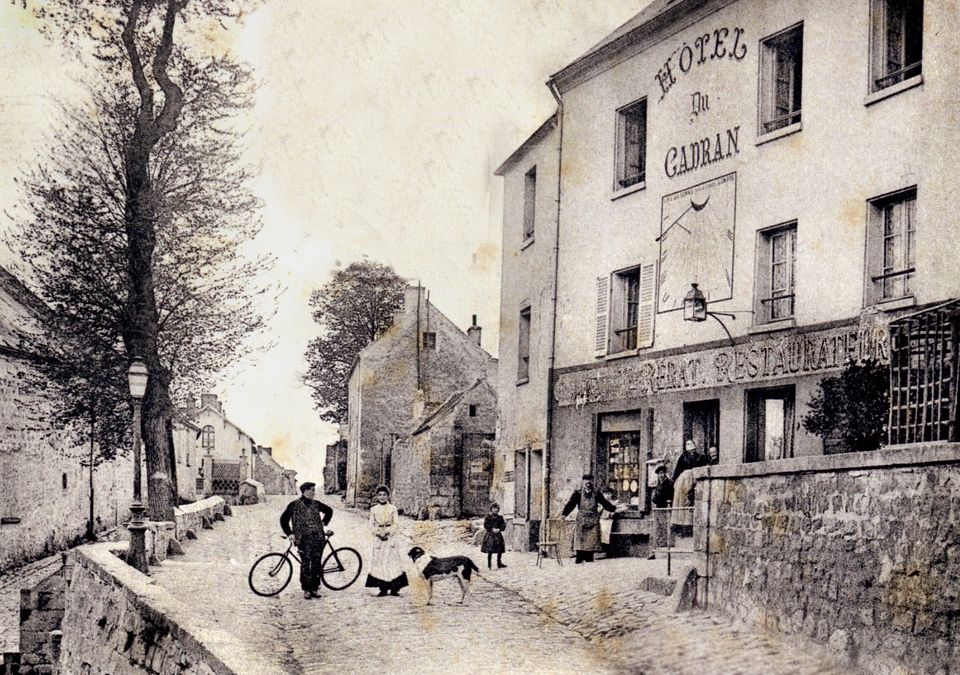 Little is known about Brooke’s artistic career, but he exhibited two paintings in Summer Exhibitions at London’s Royal Academy of Arts (Notre Dame de Paris at Night in 1890 and Miss *** the following year).

Brooke returned to Yokohama in the early 1890s and continued to paint for a few years, but later took up work as a proofreader for the Japan Daily Herald. Kodera has discovered that Brooke seems to have married a Japanese woman with the surname Seki (or had a relationship with her) and together they had a daughter, called Ume.

Yokohama was completely destroyed by the Great Kanto Earthquake in 1923. Brooke survived, although his house must have been burnt in the ensuing fire. He then moved to Kobe, where he died in 1938.

Kodera, who discovered the artist's grave in the city’s Municipal Foreign Cemetery, may well have been the first person to pay homage at Brooke’s resting place since the year of the funeral. He placed a bouquet of sunflowers and roses on the grave. This week Kodera recalled: “At the cemetery I could not help imagining the loneliness of the man who was probably deprived of all his possessions—possibly even works he had been given by Van Gogh—by the devastating earthquake.”

And as for the newly discovered watercolour, it could be that the figures are Brooke’s Japanese wife and infant daughter. Sadly, little Ume would die when she was just six. 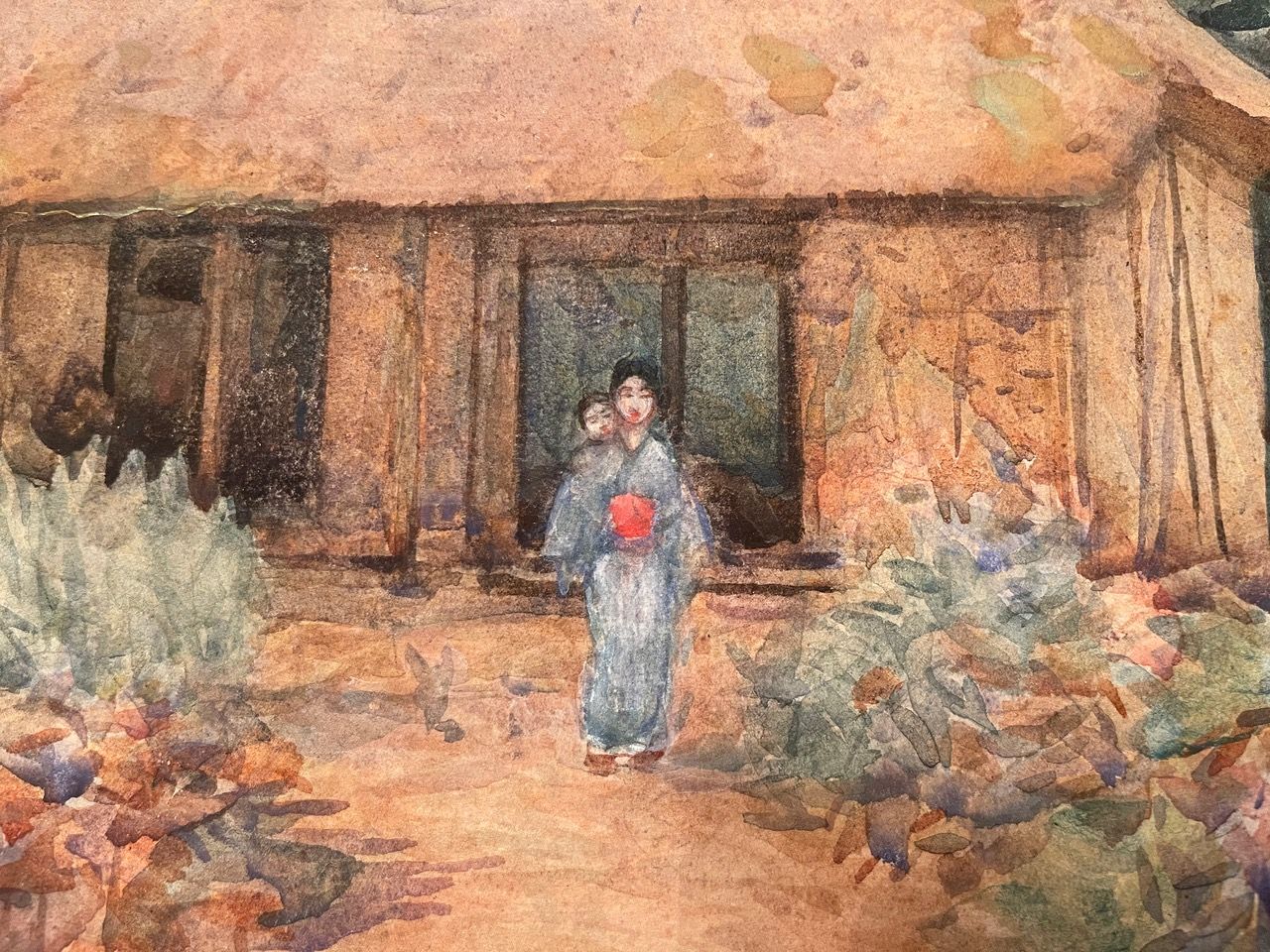 Detail of Brooke’s Japanese landscape with a mother and child Courtesy of John Mathews, Scarborough, Maine