On the anniversary of Vincent’s death, his picture can be seen as “a suicide note in colour”

A series of astonishing coincidences has led to the discovery of a 1907 photograph that shows almost the same view as that in Van Gogh’s last painting, Tree Roots (1890). Thanks to clever detective work, we now have a greater insight into the artist’s final hours before the artist shot himself, which led to his death two days later on 29 July 1890.

The photograph depicts a man almost hidden in a grove of shaded trees on a summer’s day. The glass-plate negative comes from a collection once owned by Edouard Van Halteren, a Brussels lawyer and yachtsman. The glass plates illustrate a cruise he made along the River Oise, just north of Paris, and include several of Auvers-sur-Oise, where Van Gogh stayed in the spring of 1890. 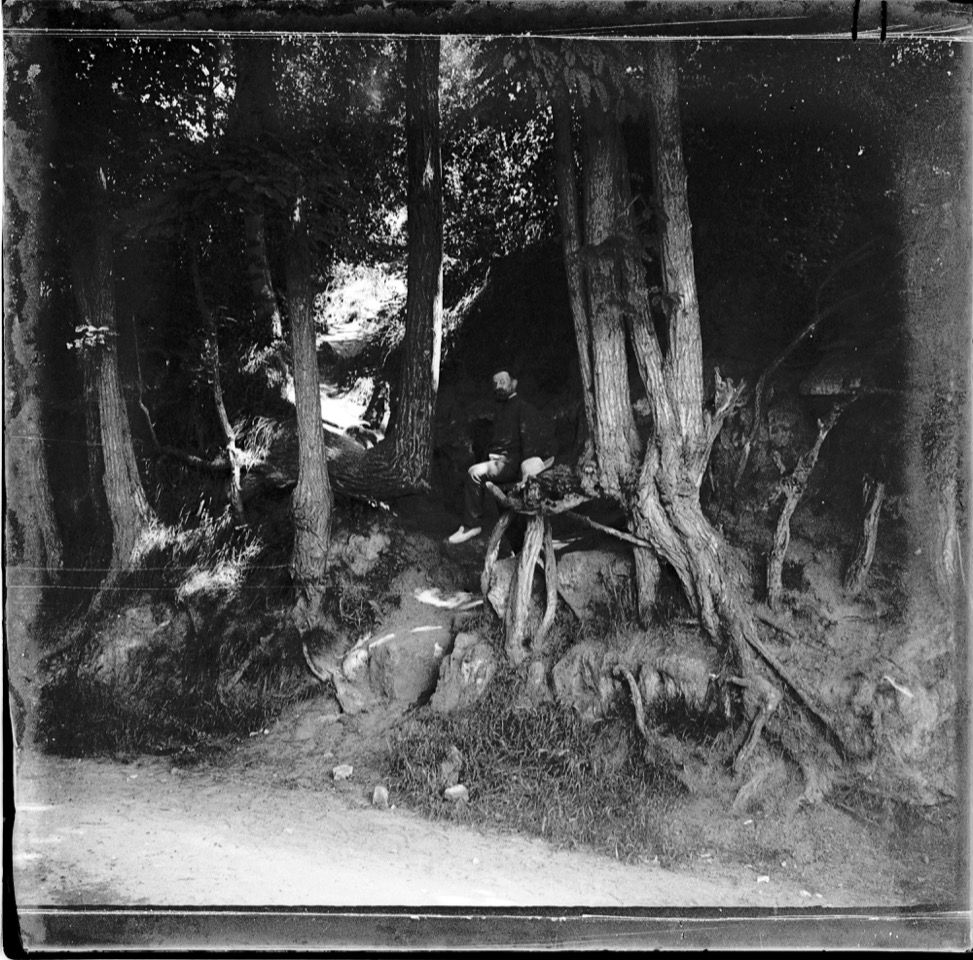 Thanks to a series of discoveries, it has been established that Tree Roots was Van Gogh’s last picture—and thanks to the 1907 photograph we now know the precise spot where it was painted.

The research began 2012 when the Van Gogh Museum’s senior researcher Louis van Tilborgh identified Tree Roots as Van Gogh’s last picture, citing a phrase in an annotated copy of a 1893 newspaper article. But although Van Tilborgh believed that the painting was based on an actual clump of trees somewhere in Auvers, some other specialists had regarded it as the product of the artist’s imagination.

Exactly a year ago, in July 2020, it was announced that the spot had been provisionally identified. Wouter van der Veen, the scientific director of the Auvers-based Institut van Gogh, came across a little-known postcard depicting what appeared to be the same tree roots as in the painting. The card, dating from around 1910, was entitled “Auvers-sur-Oise - Rue Daubigny”. 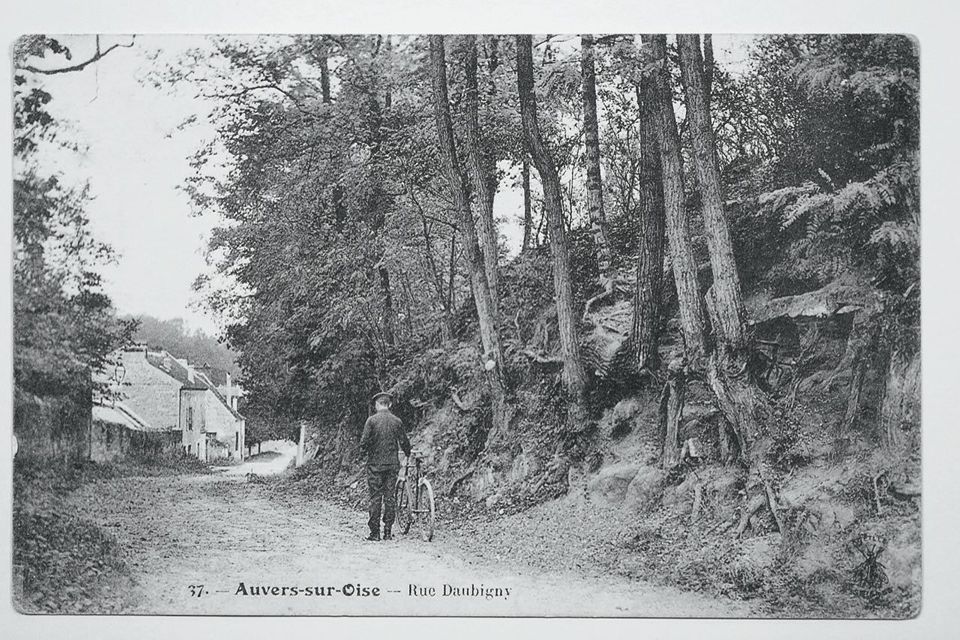 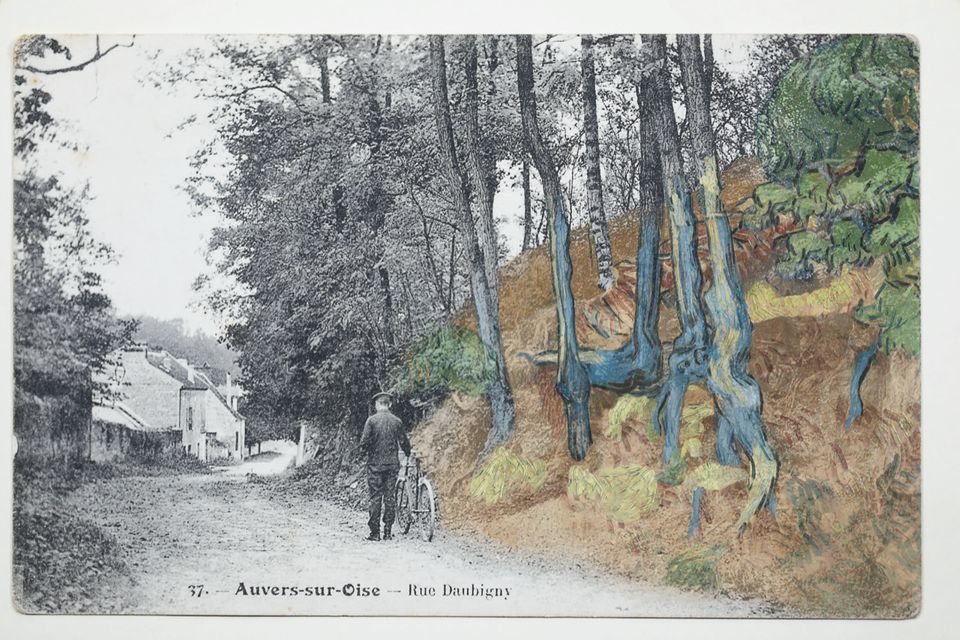 Although the Rue Daubigny identification seemed highly plausible last year, Van der Veen admitted that it was not conclusive. But thanks to the 1907 photograph, the Van Gogh Museum now accepts the “absolute certainty” about the location.

The photographer stood just a few metres behind where the cyclist appears in the postcard, on the verge on the left side of the road. Comparing the painting and the photograph, it is clear the they must have been done within a couple of metres from each other. It is interesting that both the artist and the photographer chose almost exactly the same viewpoint.

But what is the story of the photograph? In the summer of 1907, Van Halteren sailed his yacht Oyouki along the River Oise. A family member, friend or professional photographer accompanied him, taking 19 glass-plate negatives to record the trip. Most of the subjects are of tourist attractions, but there must have been something about the Auvers tree roots which caught their attention.

And who is the man with the moustache photographed comfortably sitting on one of the tree roots? An enlargement of the face shows that it is clearly Van Halteren, who would then have been aged around 36. This week we tracked down an image of him in the satirical weekly Pourquoi Pas? (Why Not?). His elongated moustache must have been quite a feature, since it is singled out for mention in an article about him in a French newspaper (L’Estafette, 10 May 1913). 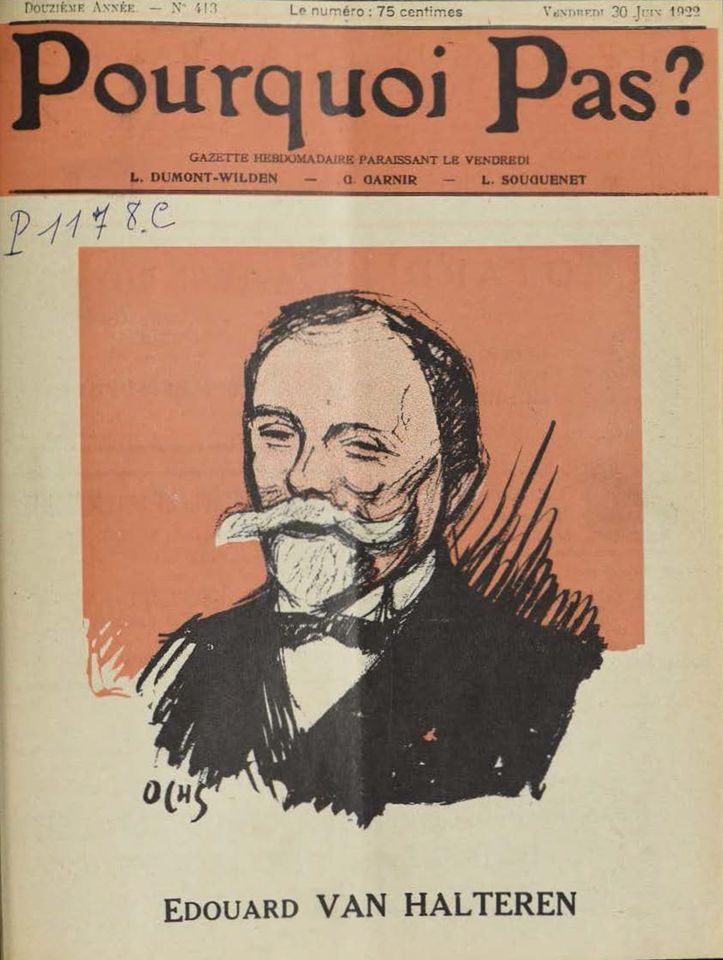 Six years ago, Van Halteren’s descendants sold the 19 glass-plate negatives in a Brussels auction. The buyer was Fabrice Dassé, a local historian from Pontoise, very close to Auvers.

Dassé later posted the 19 images on his website and in May this year the one of the trees caught the eye of an Auvers resident and artist, Thomas Reveau. He lives in Rue Daubigny, only two minutes’ walk away from the postcard spot, and even though the glass-plate negative shows the scene in reverse, he immediately recognised the site.

So what does the 1907 photograph tell us about Van Gogh’s painting? Until recently it was assumed that Van Gogh had exaggerated the roots. His turbulent composition had even led some commentators to suggest that it was the product of a confused state of mind.

But the photograph suggests that the drama of the scene was very real, inspiring Vincent to capture the rhythm of the roots as they “dance” across his composition. As Teio Meedendorp, another senior researcher at the Van Gogh Museum, puts it: “The sheer size of these fairy-tale roots and trunks, with their whimsical shapes, clearly attracted the eyes and mind of Van Gogh”. Photograph of the site, as originally discovered, May 2020 © Arthénon, Strasbourg

The final element of the astonishing story is that the tree roots still survive to this day, on the roadside just outside 48 Rue Daubigny. Although only two minutes’ walk from the inn where Van Gogh lodged, no one had recognised the site until Van der Veen discovered the postcard and then identified the place on the ground.

Unfortunately, a dispute has recently developed over how the site should be protected and displayed. Jean-François and Hélène Serlinger, who own the site, have been thwarted by the mayor of Auvers. The municipality has refused to grant the Serlingers permission to install a protective metal fence which would allow the public to view the remains of the trees which so inspired Van Gogh. Instead the site has been temporarily boarded up. The intriguing question is what the Tree Roots painting tells us about Vincent’s thoughts on the day that he shot himself. Perhaps a clue is revealed in a letter sent from Vincent to his brother Theo two years earlier in Arles. Vincent wrote of “a green shoot growing from the roots of the old felled trunk—these are things so spiritual that a kind of melancholy remains with us”. Perhaps he was suggesting that life continues, even though an individual dies.

Van der Veen, after his intensive study of Tree Roots, believes that the painting contains an important message from the artist to Theo. It represented “a pictorial adieu, a suicide note in colour”.

My forthcoming book on Van Gogh’s period in Auvers, including a detailed consideration of his death, will be published on 21 September: Van Gogh’s Finale: Auvers and the Artist’s Rise to Fame (Frances Lincoln).