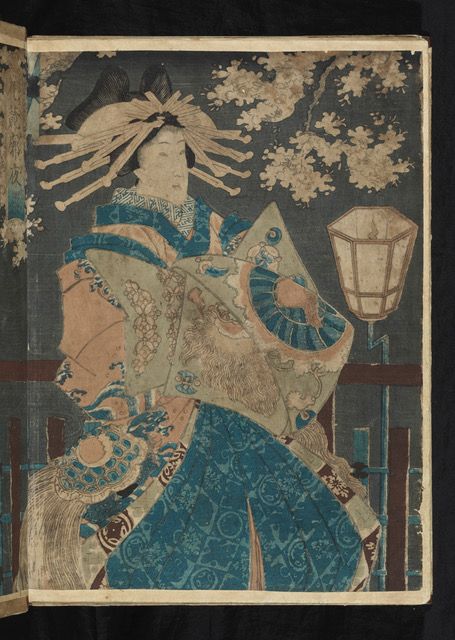 Gauguin’s copy of Utagawa Kunisada, A Courtesan, from the series "Night Cherry Blossoms in the Pleasure Quarter” (1858) Courtesy of Courtauld, London

Gauguin’s lost manuscript Avant et Après, acquired by London’s Courtauld Gallery and unveiled last week, includes three Japanese prints of “beautiful women” pasted onto the endpapers. All have now been identified as by Utagawa Kunisada, one of Japan’s most important printmakers.

Intriguingly, Kunisada was Van Gogh’s favourite non-European artist: of the 549 surviving Japanese prints he once owned, nearly half are by him. So could Gauguin have acquired his three Kunisadas from Van Gogh?

The three Japanese prints in Avant et Après (Before and After) were obviously extremely important for Gauguin, since he prominently placed them in a manuscript which represented his memoirs and artistic beliefs, compiled just two months before his death in the Marquesas Islands in 1903.

The prints had to be trimmed slightly to make them fit the notebook and they are badly faded. Since the manuscript was completed they have been protected, so damage from light exposure would almost certainly have occurred before 1903. This suggests that the prints were among the images which Gauguin pinned on the walls of his Polynesian huts, where they presumably suffered from the tropical sun.

Within the past few weeks an important discovery has been made: all three prints are by Utagawa Kunisada (1786-1865), also known as Utagawa Toyokuni III. Highly prolific, in his own day he was as well-known in Japan as Hokusai and Hiroshige. Two of the prints were identified as Kunisadas by the Courtauld curator Ketty Gottardo and her colleagues and the third by the Japanese scholar Shigeru Oikawa. 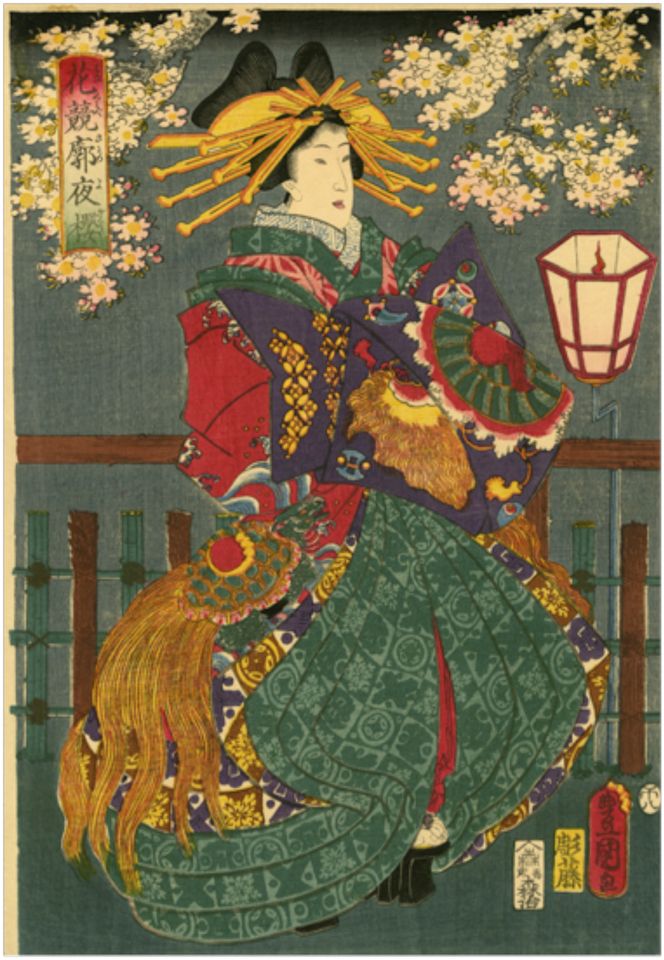 A well-preserved copy of Utagawa Kunisada's A Courtesan, from the series "Night Cherry Blossoms in the Pleasure Quarter” (1858) Courtesy of Five Colleges and Historic Deerfield Museum Consortium, Massachusetts. Gift of William Green

The print at the front of the manuscript, of a geisha by a lantern, is known as A Courtesan, from the series "Night Cherry Blossoms in the Pleasure Quarter” (1858). A copy of the print in another collection, in fresh condition, emphasises the serious fading suffered by Gauguin’s version.

Two prints are pasted at the back of the manuscript. Summer Airing of Kimono (1854) shows an elegantly dressed woman in an interior. Kabuki Actor Kataoka Ainosuke III in the role of Karaito (1857) depicts a woman (played by a male actor) holding the bow for a musical instrument. Gauguin would presumably have been unaware that it was a male actor, wrongly seeing the character as a “beautiful woman” (Bijin-ga, in Japanese). 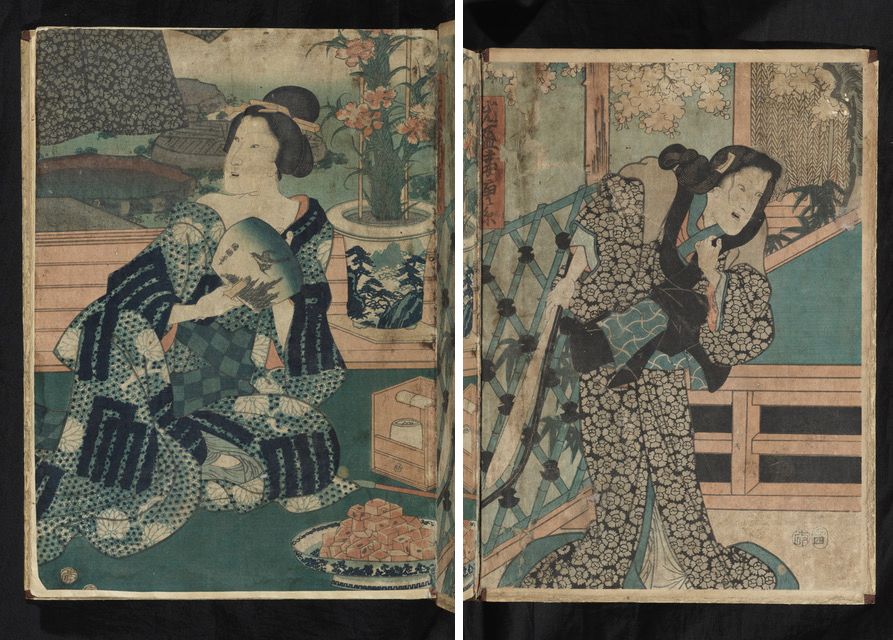 Left: Gauguin’s copy of Utagawa Kunisada's Summer Airing of Kimono (1854) and right: his copy of Kunisada's Kabuki Actor Kataoka Ainosuke III in the role of Karaito (1857) Courtesy of Courtauld, London

Daria Melnikova, a researcher at the Sainsbury Institute for the Study of Japanese Arts and Cultures (University of East Anglia), also independently identified the prints. She sees links with Gauguin’s paintings: “Kunisada’s graphic conventions provided a source for expanding Gauguin’s artistic language.” Melnikova believes that Summer Airing of Kimono may have influenced the pose of the main woman in Gauguin’s Tahitian painting The Siesta (1892-94, Metropolitan Museum of Art, New York). This possible link is intriguing, although perhaps slightly tenuous. 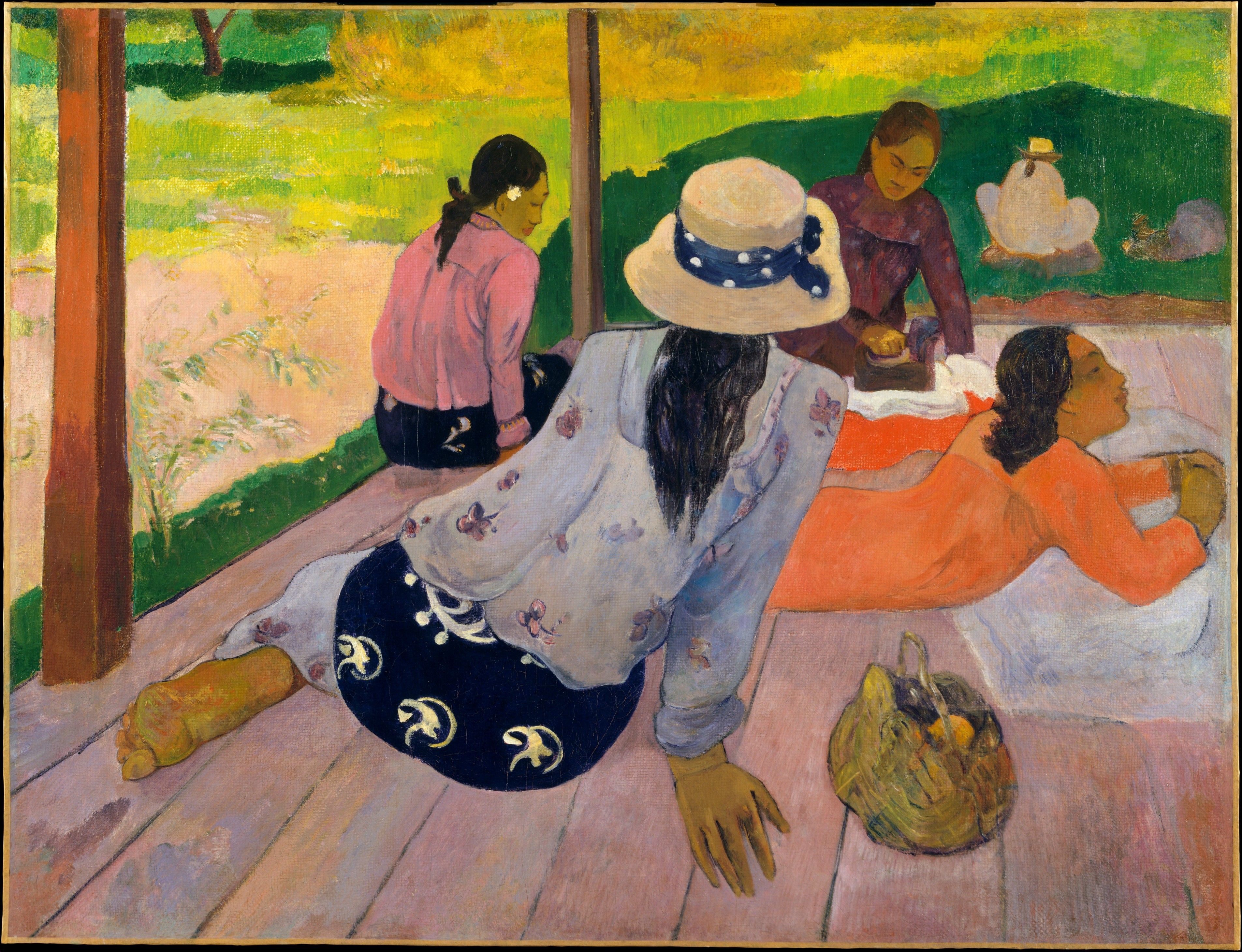 Gauguin’s colleague Van Gogh had an enormously greater collection of Kunisada’s work—over 250 of his 549 surviving Japanese prints. One even featured in Van Gogh’s own paintings. In the two versions of Portrait of Père Tanguy (1887, Musée Rodin, Paris and Niarchos collection), which have Japanese prints in the background, the head of a woman on the left side in the centre is Kunisada’s Actor Iwai Kumesaburō (III) in the Role of the Courtesan Takao of the Miura House (1861). 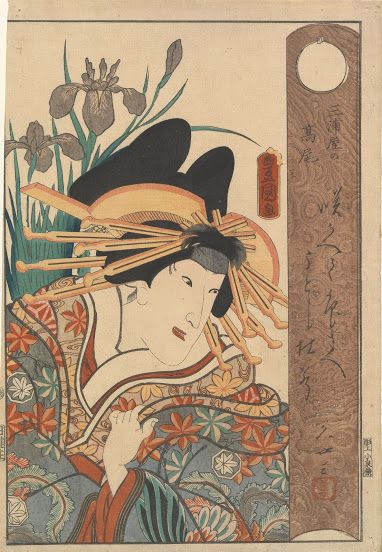 Van Gogh’s surviving Japanese prints were nearly all acquired from the Paris-based dealer Siegfried Bing in the winter of 1886-87. Vincent later wrote to his brother Theo about the purchase: “There’s an attic at Bing’s, and in it there’s a heap of ten thousand Japanese prints, landscapes, figures.”

Chris Uhlenbeck, a Dutch specialist who has studied Van Gogh’s prints, says that he bought hundreds to sell to “clientele visiting the entertainment district of Montmartre”. Not being able to market his own paintings, Van Gogh thought he might be able to make money from the prints. This venture ended up failing dismally, and he ended up giving some to his artist friend Emile Bernard. Similarly, Van Gogh might well have given prints to Gauguin after they met in late 1887 in Paris.

In September 1888, a few weeks before Gauguin arrived to stay in with Vincent in the Yellow House, Theo sent a package of Japanese prints to Arles. The two artists would certainly have intently studied the prints together and it is quite possible that Van Gogh might then have given some to Gauguin.

Oikawa agrees that it is “likely” that the three prints in Avant et Après were given to Gauguin by Van Gogh in 1888. Gauguin and Van Gogh may well not have known Kunisada’s name, “but they probably identified the prints of beautiful women to be by the same artist”.

The new theory that some of Gauguin’s Japanese prints came from Van Gogh throws fresh light on their relationship. In the text of Avant et Après Gauguin claims to have been a key influence on the development of Van Gogh’s extraordinary paintings in Provence. But the prints on the endpapers of the manuscript tell another story—that Gauguin’s love of Japanese art came partly from Van Gogh. It was an artistic relationship of equals, to which they both contributed.

In Gauguin’s final years, in the Marquesas, Japanese prints continued inspire his art, as they had Van Gogh. As Gauguin watched the sunrise from his remote Pacific island home, he must have sometimes have dreamed of Japan, 10,000km over the ocean.