Gauguin’s book-length manuscript Avant et Après (Before and After) has never been exhibited since it was written in 1903 in the artist’s hut in the Marquesas Islands and it has not even been privately shown to art historians since the 1920s. I was privileged to spend nearly two hours poring over the text with the Courtauld Gallery’s curator Ketty Gottardo. We focussed on the pages where Gauguin describes his tumultuous time with Van Gogh. 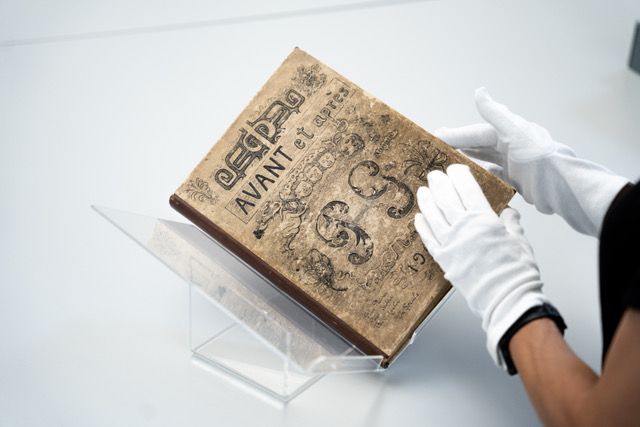 Gauguin’s cover for his manuscript Avant et Après (1903) Courtesy of the Courtauld, London

Last Sunday The Art Newspaper revealed that the Courtauld Gallery in London had acquired Avant et Après, which had been locked away in a private UK collection since the 1930s—after being brought out of Germany by a Jewish industrialist fleeing the Nazis.

Gauguin specialists had been trying to track down Avant et Après for decades and even those based in Britain had no idea that it was actually in London, owned by Erich Goeritz (1889-1955) and then by his son Thomas (1918-97). This summer their descendants offered the manuscript through Sotheby's for allocation to the Courtauld, to satisfy £6.5m of inheritance tax (this means that its undisclosed market value could well be around £10m). Its importance lies in both the 213 pages of text and the 29 drawings and monotype prints.

Erich Goeritz assembled an important art collection, including works by Manet, Cézanne and a fine group of German Expressionists, particularly Lovis Corinth. His Monet work Le Palais Ducal (1908) was sold by his heirs at Sotheby’s last year for £27.5m.

Goeritz also owned a “Van Gogh”, but this turned out to be a fake: Still Life of Herrings and Cheese. He bought it in 1924, but wisely sold it two years later to the Thannhauser gallery, as noted by the German Van Gogh specialist Stefan Koldehoff. This fake Van Gogh was destroyed in an air raid in 1943. 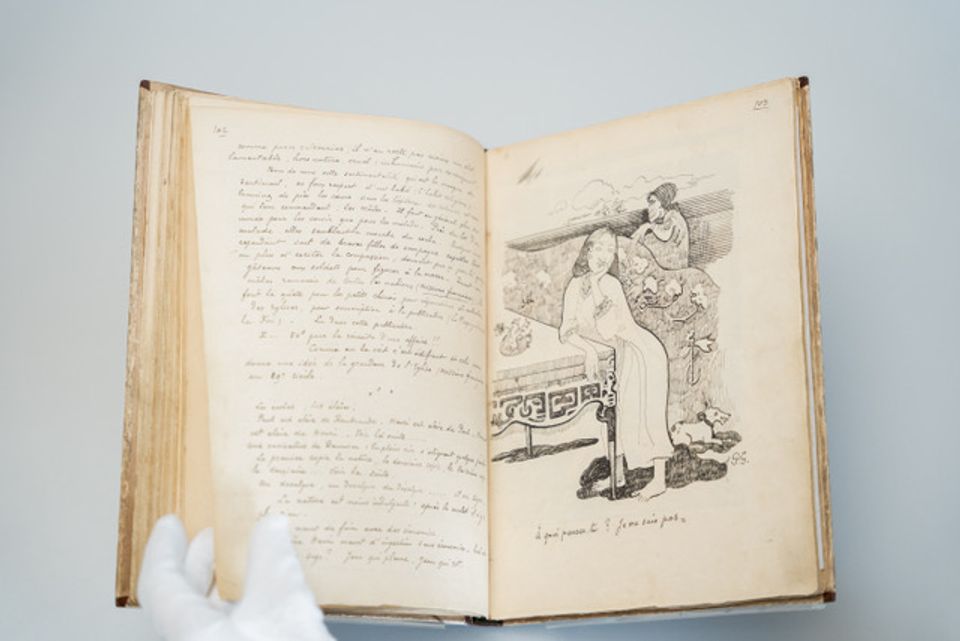 Gauguin’s Avant et Après, with a page of text and the drawing “What are you thinking? I don’t know.” Courtesy of the Courtauld, London

Avant et Après had been bought by Goeritz in the mid 1920s. Completed by Gauguin just two months before his death, the manuscript is effectively his testimony—a mixture of reminiscences and artistic beliefs. Although facsimiles, transcripts and translations have been published over many years, the opportunity to study the original will facilitate new research by scholars.

The most fascinating pages in Avant et Après are those on Gauguin’s nine weeks in Arles, when he was living and working with Van Gogh in the Yellow House.

One of Gauguin’s stories is about the interior decoration of a brothel which the two men patronised. On one occasion he was admitted to the special salon, which was decorated with two art prints published in Paris by Goupil—Gauguin’s own dealer and the gallery where Vincent’s brother Theo worked.

One print was of the Virgin and the other of Venus, both by William-Adolphe Bouguereau, a conventional and financially successful artist. It is unclear whether the two images had been hung together to amuse his clients—or to add a veneer of respectability.

It is too difficult to identify Bouguereau’s Virgin (since quite a number were published by Goupil), but I have managed to track down the Venus, a print depicting the birth of the goddess. In Avant et Après Gauguin described the Arles brothel-keeper as a man of genius: “The splendid pimp that he was, he had understood the unrevolutionary art of Bouguereau, and where it belonged.” 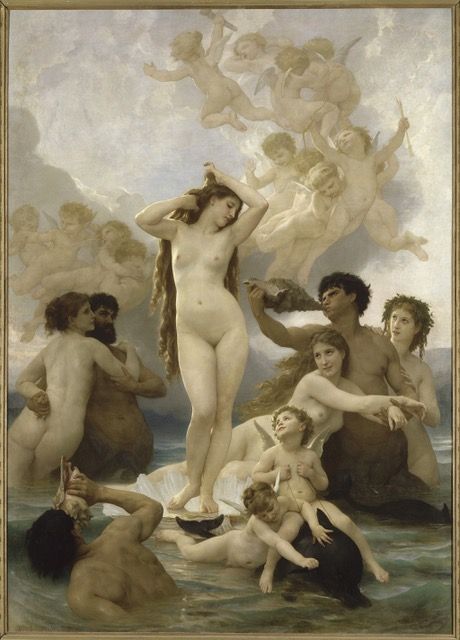 William-Adolphe Bouguereau’s The Birth of Venus (1879), a print of this painting was displayed in the Arles brothel © RMN-Grand Palais (Musée d’Orsay, Paris)/Hervé Lewandowski

Elsewhere in the manuscript Gauguin refers to the picture that he made in the Yellow House of Van Gogh in the act of painting the Sunflowers. He then quotes what Vincent apparently told him when it was completed: “It is certainly me, but me gone mad.” 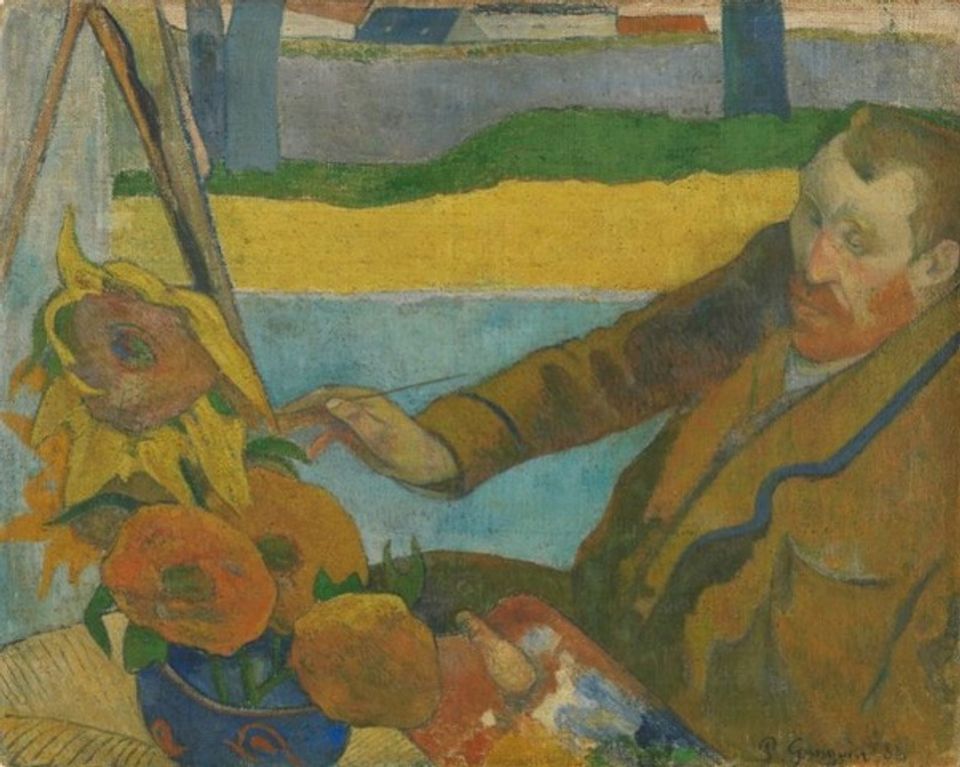 Avant et Après includes a key sentence on Van Gogh’s Sunflowers which has been widely missed because of a mistranslation. The phrase “soleils sur soleils en plein soleil” has until now been translated into English, rather meaninglessly, as “suns on suns in full sun”. But “soleils” in French can also mean “sunflowers”, so Gauguin actually meant “sunflowers on sunflowers in full sun”—a reference to Van Gogh’s still life of 15 densely packed sunflowers against a yellow background, the painting now at London’s National Gallery.

In Avant et Après Gauguin also makes the audacious claim that it was he who was responsible for Van Gogh’s Sunflowers. Gauguin writes: “I undertook the task of enlightening him… From that day my Van Gogh made astonishing progress… the result was that whole series of sunflowers on sunflowers in full sunlight” (my emphasis). The truth is rather different—Van Gogh painted his Arles Sunflowers in August 1888, two months before Gauguin’s arrival.

The English translation of Avant et Après has also occasionally been expurgated. Gauguin goes on to quote an unnamed Italian artist who was highly critical of Van Gogh’s work and his Sunflowers, but this paragraph is omitted in the English edition. The Italian is quoted as saying “mârde, mârde tout est jaune” (shit, shit everything is yellow). Gauguin deliberately misspelt the French word “merde”, presenting it as an Italian might pronounce it. 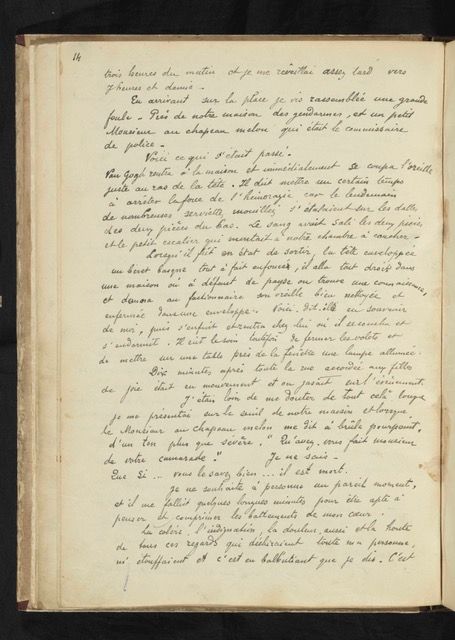 Gauguin’s account of the ear incident in Avant et Après, which starts seven lines from the top “Voici ce qui c’était passé…” (This is what had happened…) Courtesy of the Courtauld, London

But what is most fascinating in Gauguin’s manuscript is his account of the last days that he and Van Gogh had together just before Christmas 1888. Gauguin claims that a few evenings earlier they had gone to a café and Vincent had ordered an absinthe and “suddenly he threw the glass and its content toward my head”. Fortunately Gauguin avoided the blow.

On the fateful evening of 23 December Gauguin claims that he had left the Yellow House to get some fresh air, when he suddenly saw that “Vincent was rushing towards me, an open razor in his hand”. Gauguin stared at his companion, who retreated back home.

Gauguin writes in Avant et Après that he was fearful and spent the night in “a good hotel”. Although there have been some suspicions that this might have been a brothel, thanks to a long-forgotten comment by the German artist Max Braumann in 1928 we can identify it as the respectable Hotel Thévot, in the Place du Forum.

In the morning Gauguin returned to the Yellow House to discover what had happened. Van Gogh had “cut his ear close to the head” and then went “straight to a house where in every country one can find an acquaintance”, his euphemism for a brothel.

It has to be questioned whether either the absinthe glass or the razor incidents really happened—or if Gauguin presents them in Avant et Après in an attempt to justify his own actions after his friend’s self-mutilation. By 1903 Van Gogh was beginning to become famous, and Gauguin was jealous that his own reputation would soon be eclipsed by that of his Yellow House colleague.

Sorting out fact from fiction will be one of the challenges facing Gottardo and the Gauguin specialists who will be clamouring to study this long-awaited manuscript.

UPDATE, 5 October: New research suggests that the three Japanese prints in Gauguin’s manuscript may have been acquired from Van Gogh.

What was the best art book you read in 2020? The Art Newspaper team reveals its favourite publications

What was the best art book you read in 2020? The Art Newspaper team reveals its favourite publications