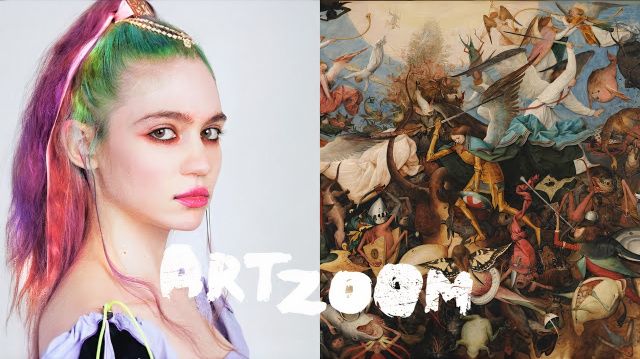 Have you ever wanted to hear the stellar UK singer FKA twigs discuss the importance of 17th-century artist Artemisia Gentileschi? Or Grimes give her take on Pieter Bruegel the Elder? Music superstars tell the stories behind some of art’s most memorable masterpieces for the latest Art Zoom series on the Google Arts & Culture digital platform. FKA twigs provides plenty of pithy details about Gentileschi’s Mary Magdalene in Ecstasy (1623), highlighting the artist's innovations in a patriarchal society.

“When making my own album entitled Magdalene, it was a time of great healing for me. When I was researching about Mary Magdalene and looking at a lot of paintings of her, she seemed so poised and so together. But the irony is in finishing my music, I found a deep wildness, a looseness, an acceptance, a release. And that’s exactly what I’m experiencing in this painting,” says Grammy award-nominated FKA twigs.

Canadian video director and songwriter Grimes is just as forthcoming about Bruegel’s grotesque The Fall of the Rebel Angels (1562). “This painting is such a nightmare… This is like a deeply emotional piece, he must have been having a really bad day,” she says. “Bruegel added some quirky or gory details such as farting demons, naked creatures showing their guts or arses. I’m just super attracted to that kind of thing.”

Please also tune in for an analysis of Mondrian’s Large Composition A with Black, Red, Gray, Yellow and Blue (1921) by The 1975 frontman Matt Healy and Ellie Goulding’s musings on Julie Mehretu and Cy Twombly. Other participants include the Colombian singer J Balvin and K-pop idol Chaeyoung. Viewers can zoom in on details using Google’s giga-pixel Art Camera and can even place the works discussed within their own home through an ingenious augmented reality device (worth trying if you want to see a top-notch Twombly next to your telly).