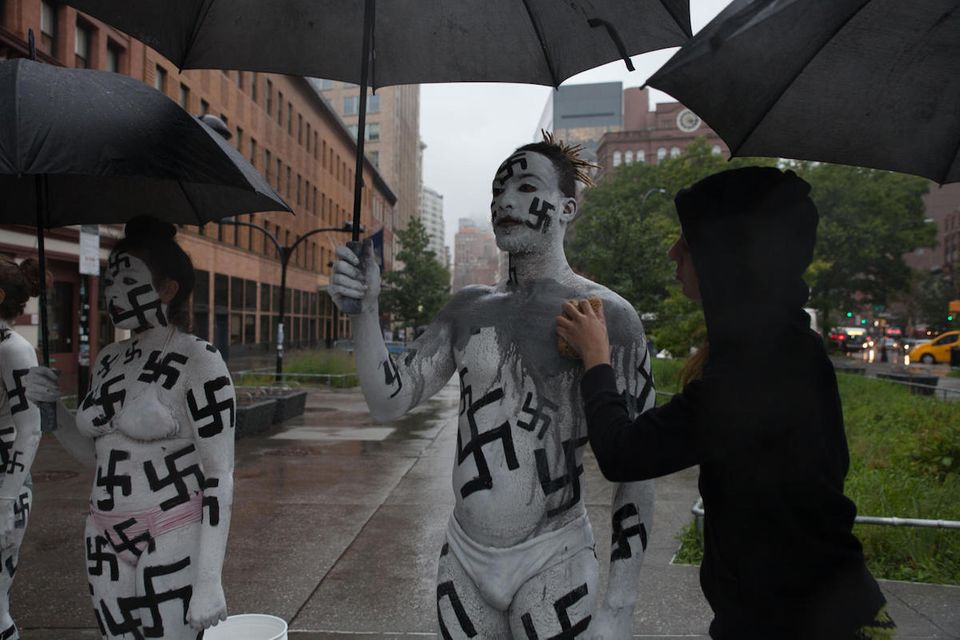 Responding to the far-right policies of President Jair Bolsonaro of Brazil and what they see as President Donald Trump's incitement of white nationalist violence, a group of artists staged a provocative performance in New York’s Cooper Square on 6 September that aimed to promote the eradication of "fascist ideologies". The group Hemispheric Institute of New York University partnered with the Brazilian artists Marcelo Denny and Marcos Bulhões to stage the piece Banho de Descarrego (Discharge Bath), a reference to ritual baths used in Afro-Brazilian religions that are intended to cleanse negative energy. “Since his election campaign, Bolsonaro has propagated hate speech against everything that doesn’t represent the Christian, macho, heterosexual and cis universe, including Indigenous people, feminists, homosexuals, blacks, people of African descent, socialists and communists, human rights defenders and so many more,” Bulhões said. Denny meanwhile denounced Trump, saying he had fueled “growing discourse against migrants and public support for the poor" through "aggressive war-like outbursts". He accused Trump of contributing to a growing wave of "neo-fascist thinking" that has been "taking over the United States”. In the performance (which was first shown in Natal, Brazil, in 2018), the artists and other participants painted themselves with swastikas from head to toe to represent lesions of a “neo-fascist plague”, while inviting the public to wash the paint off the participants’ bodies.