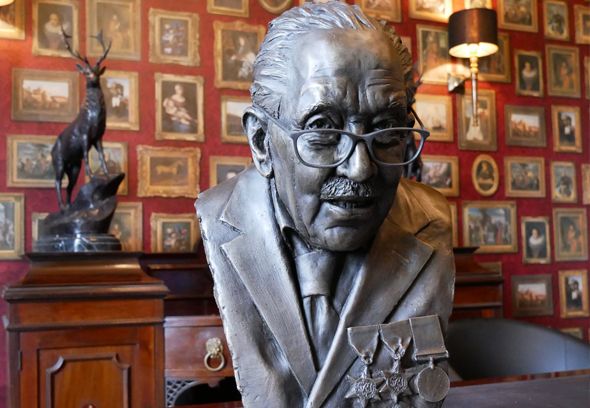 Calls are growing for a statue honouring Captain Sir Tom Moore, the 100-year-old British army veteran who died earlier this week from coronavirus. Supporters of such a memorial want the statue erected in the most prominent public art site in the UK—the Fourth Plinth in Trafalgar Square—which has been home in recent years to headline-hitting contemporary works by artists such as David Shrigley and Katharina Fritsch. The former Tory MP Nicholas Soames is leading the charge for the statue campaign.

“In recent years the Fourth Plinth in Trafalgar Square has featured a number of fashionable or politically correct art works, such as a large dollop of whipped cream topped with a cherry and a fly [The End by Heather Philippson],” Soames wrote in the Daily Mail. “How much better it would be if the magnificent and nationally unifying figure of Sir Tom was on view instead.” Moore raised more than £32m for NHS charities by walking 100 laps of his garden last spring.

We understand that Philippson's sculpture is on display until spring 2022 and the Fourth Plinth Commissioning Group has been shortlisting artists for the next sculptures. Last year, the company Monumental Icons unveiled a bust of Tom Moore sculpted by Andrew Edwards at St James's hospital in Leeds.

UPDATE: A spokesperson for the Mayor of London says: "Sadiq [Khan] believes that we should all remember Captain Sir Tom Moore’s great efforts to help the NHS and it’s important that his family are involved in deciding the most appropriate way to remember his legacy.”