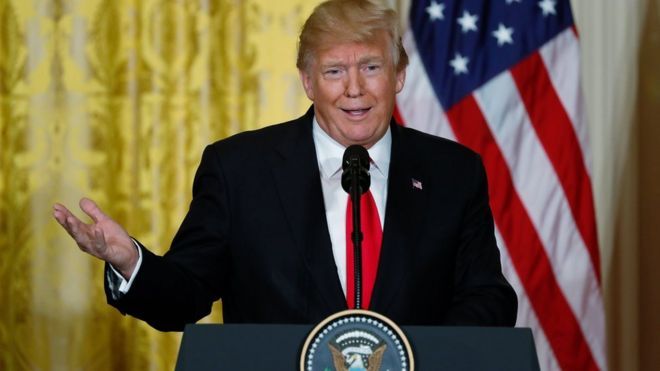 Trump visited Paris in 2018 and returned with $750,000 worth of replica art from the US Embassy in France. Reuters

President Donald Trump swiped some art from the residence of the US ambassador to France during a 2018 visit—the same visit on which he cancelled a trip to visit fallen First World War Marines at the Aisne-Marne American Cemetery outside Paris after allegedly calling the dead “suckers” and “losers”. According to a recent report by Bloomberg, Trump fancied for himself several of the pieces in the ambassador’s historic residence in Paris, where he was staying and which serves as the flagship for the State Department’s “Art in Embassies” cultural programme. Without notifying the ambassador, Jamie McCourt, the president and author of The Art of the Deal had a portrait and bust of Benjamin Franklin and a set of silver figurines depicting Greek mythological characters loaded onto Air Force One to bring them back to the White House. A bureaucratic nightmare ensued for the State Department and White House staffers, who worried that the $750,000 cache of art might not be legally transferable. Meanwhile, a flummoxed McCourt was told that she would receive the work back in six years—or 2024, when a second term of Trump’s presidency would theoretically end.

The loot, however, was deemed legal to enter the White House since it was technically US property… and all of the works were replicas or copies anyway. It remains unclear whether Trump knew that none of the pieces were original when he decided to take them home with him, or whether he, in truth, was the real sucker.