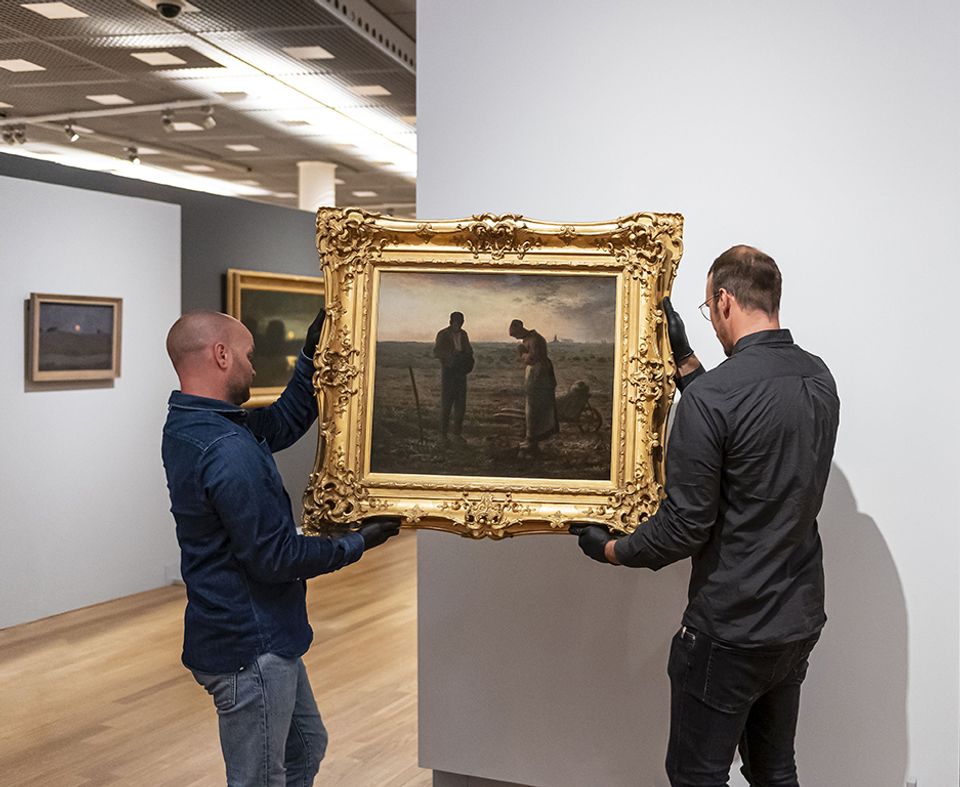 Jean-François Millet’s The Angelus (1857-59) being hung at the Van Gogh Museum, Amsterdam, on loan from the Musée d’Orsay, Paris Photo: Jan-Kees Steenman/SeeItYourself

The artists who inspired Vincent van Gogh naturally changed as his own style developed, but there was one he loved throughout his whole career: Jean-François Millet. “The intensity with which Vincent admired Millet was exceptional,” says Maite van Dijk, the co-curator of an exhibition which opens today at the Van Gogh Museum in Amsterdam.

Millet: Sowing the Seeds of Modern Art presents an outstanding group of the French master’s works, including The Angelus, which is very rarely lent by the Musée d’Orsay. But the focus of the exhibition is on Millet’s later influence on artists ranging from Camille Pissarro to Salvador Dalí. Van Gogh, however, dominates the show because he fell so deeply under the spell of Millet, whose subject matter was peasant life. This resonated with Vincent, who had been brought up in rural Brabant.

Today Millet (1814-75) is not particularly well known outside his native France, but in Van Gogh’s time he was arguably the world’s most famous 19th-century artist. In 1890 Millet’s Angelus sold for 750,000 francs, then a record sum for a modern painting. The price, Van Gogh commented, was “enough to make one dizzy”. Despite his admiration for the deceased artist, Van Gogh felt alienated from the market and observed that crazy prices did nothing to help struggling artists who were intent on “recouping one’s painting expenses”.

In 1875, as a 22-year-old living in Paris, Van Gogh had seen an exhibition of Millet’s drawings which filled him with inspiration. Six years later, when Van Gogh first set out to become an artist, he drew copies of Millet’s prints, to help improve his own figure drawing. 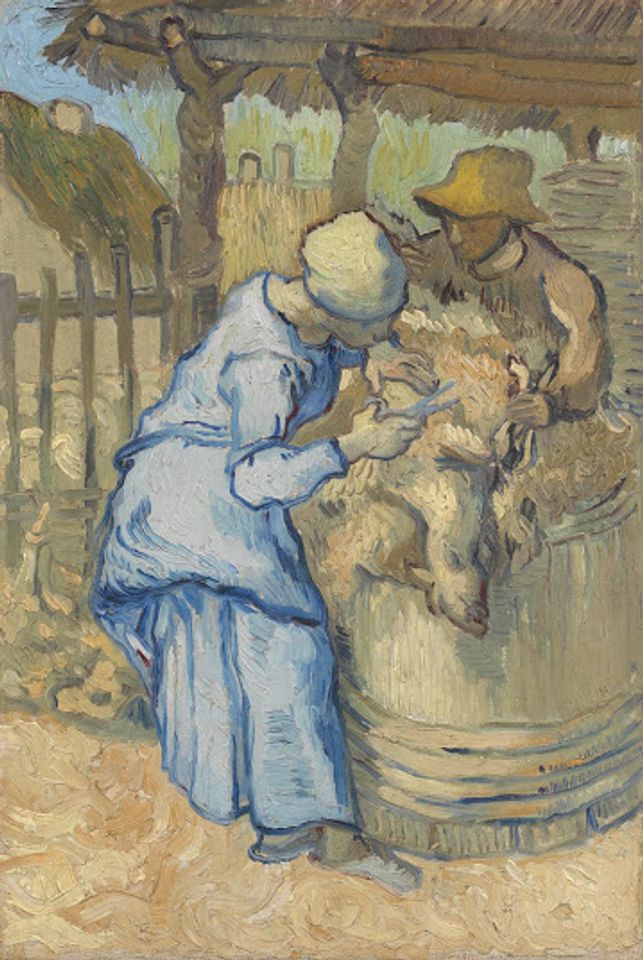 In 1889, when Van Gogh was in the asylum after mutilating his ear, he did something that was very much bolder: he created 20 painted copies inspired by Millet black-and-white prints. Van Gogh enlarged the compositions of the prints and then painted them in colour—not as the French master would have done, but according to his own imagination. Vincent wrote to his brother that he had set out to “translate them into another language”, through the medium of colour.

Van Gogh justified reworking Millet images, saying it was not simply copying: if a performer “plays some Beethoven he’ll add his personal interpretation to it… it isn’t a hard and fast rule that only the composer plays his own compositions”. 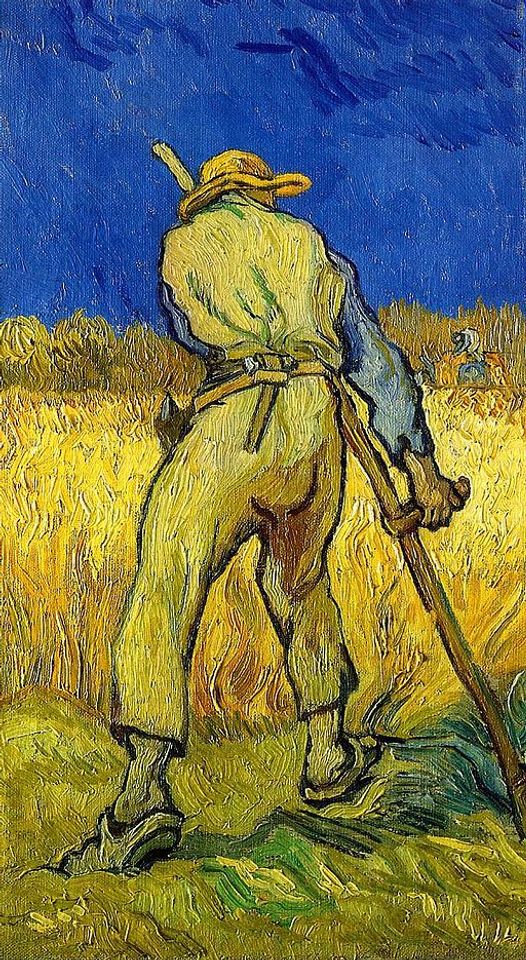 Six of Van Gogh’s “translations” are in the Amsterdam exhibition, including The Sheepshearer, one of a series of “The Labour of the Fields”. Perhaps the finest of this set is The Reaper, interpreted in colour with golden corn blazing out against a deep blue sky. This painting is on loan to the Amsterdam exhibition from Larry Ellison, the American entrepreneur and co-founder of Oracle Corporation. 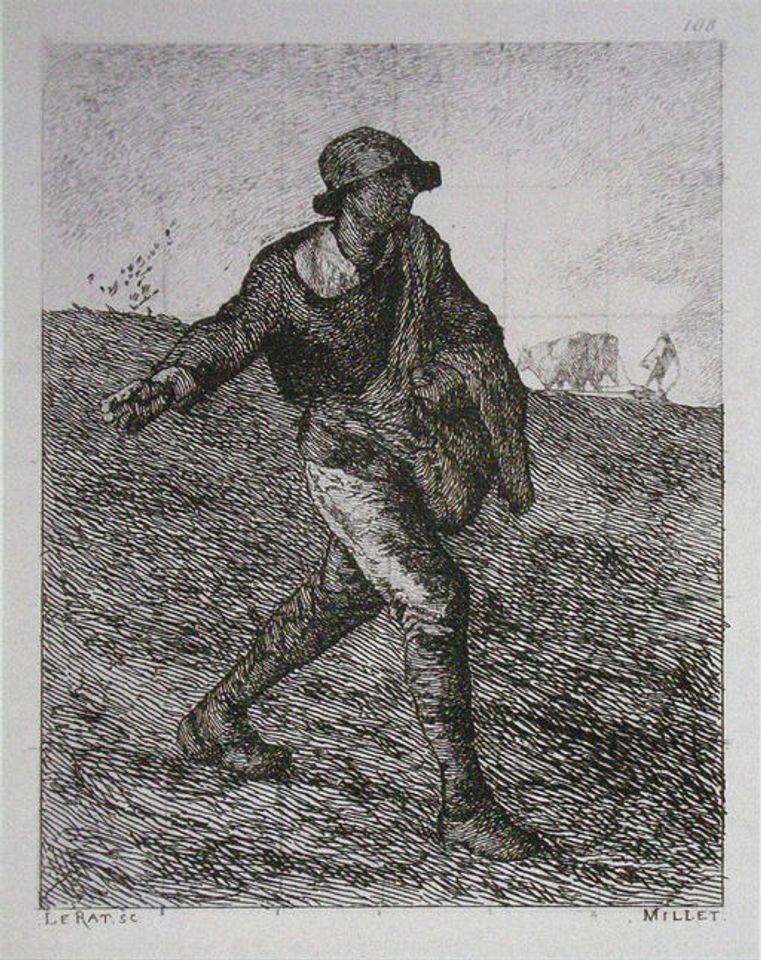 Van Gogh’s favourite Millet image was The Sower. Although he never saw Millet’s paintings of the subject, he possessed a print made after it. In 1881 Van Gogh drew a straight forward copy of the print, to practice his drawing. Seven years later, he took Millet’s figure and included it in a painting of a Provençal wheatfield. In Van Gogh’s version of The Sower, the peasant strides across a ploughed field, sowing next year’s crop, pursued by ravenous birds. In the background lies a field of unharvested wheat, ripening beneath a symbolic setting sun. 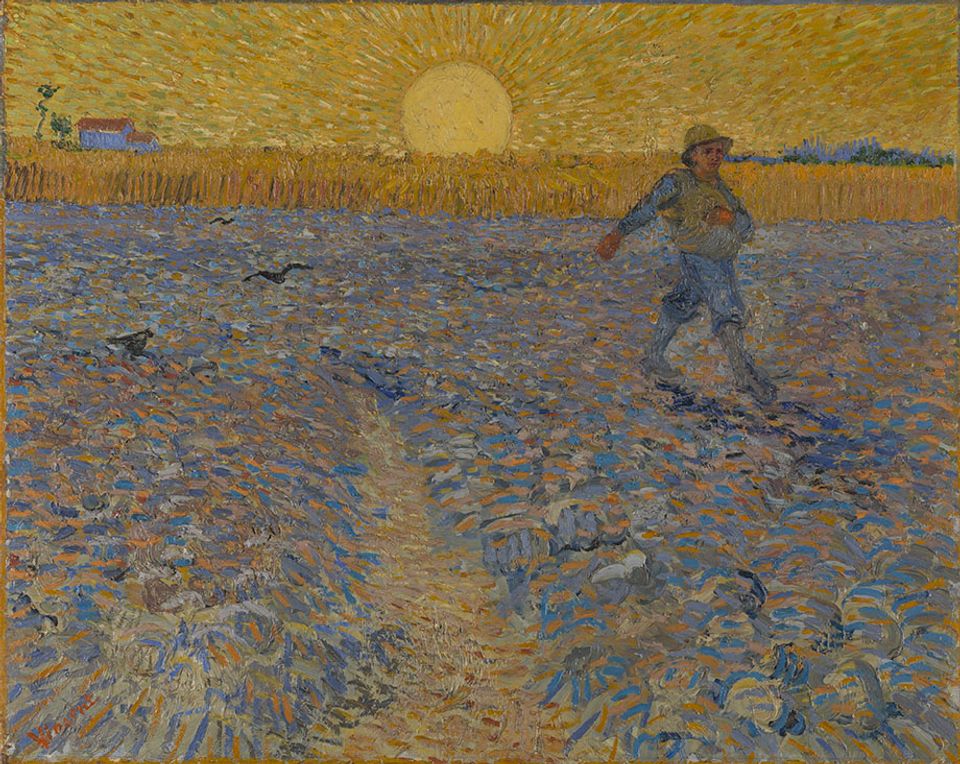 A month before his death Van Gogh took Millet as a benchmark, predicting that eventually the Impressionists would “hold their own” with the French master. Much has changed since 1890. Millet is still much respected and the current record price for his work is £2m, for a landscape which was sold in 1995. But Van Gogh’s small painting of The Reaper sold for just over £24m in 2017, going to Ellison. So his coloured interpretations of Millet are now worth many times more than the Frenchman's originals. Van Gogh can never have imagined the “dizzy” prices that his own works would fetch.

Millet: Sowing the Seeds of Modern Art is at the Van Gogh Museum, Amsterdam, until 12 January 2020. The exhibition then goes to the Saint Louis Museum of Art, 16 February-17 May 2020, where it is co-curated by Simon Kelly. A display on Jean-François Millet and the Hague School is at the Mesdag Collection in The Hague (until 5 January 2020).

The National Gallery, London exhibition on Gauguin Portraits opens on Saturday. It includes one of Gauguin’s still life with sunflowers (from a private collection in Milan), which can be regarded as a surrogate portrait of Van Gogh.