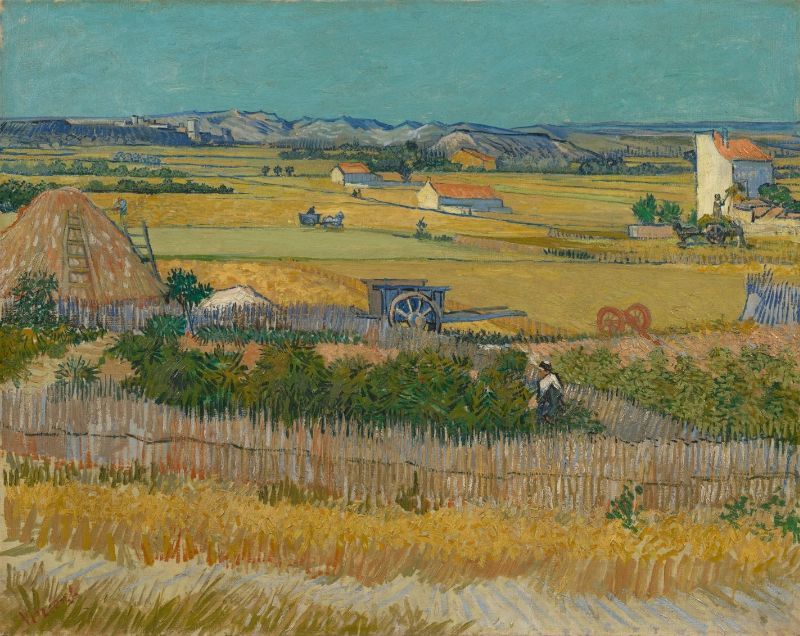 Van Gogh’s The Harvest is arguably the finest landscape of his career. Dating from the summer of 1888, when Vincent was at the height of his powers in Provence, the panoramic view captures a patchwork of fields receding towards Les Alpilles (the little Alps).

Amazingly, most of The Harvest was completed in a single day, requiring great effort and concentration under the noonday sun. Vincent wrote to his brother Theo that after returning from the fields “my brain is so tired”. He explained: “One’s mind is extremely stretched, like an actor on the stage in a difficult role—where you have to think of a thousand things at the same time.” In the evening “the only thing that comforts and distracts... is to stun oneself by taking a stiff drink or smoking very heavily”.

The painting is set in the fields just to the north-east of Arles. A blue cart, awaiting another load of freshly-cut wheat, rests in the very centre of the composition. A cluster of three farm buildings sits near a track through the fields, imparting depth and harmony to the scene. The houses lead the eye to the distant tower on the hills towards the left, part of the medieval abbey of Montmajour.

The rich colours of the golden wheatfields shimmer beneath a deep turquoise sky. An Arlésienne is moving among the greenery in the nearest plot and the small figure of a reaper scythes just beyond a large stack in the middle distance. A horse and cart hurries by, while another stands close to the nearest farmhouse, where a couple are pitchforking wheat. 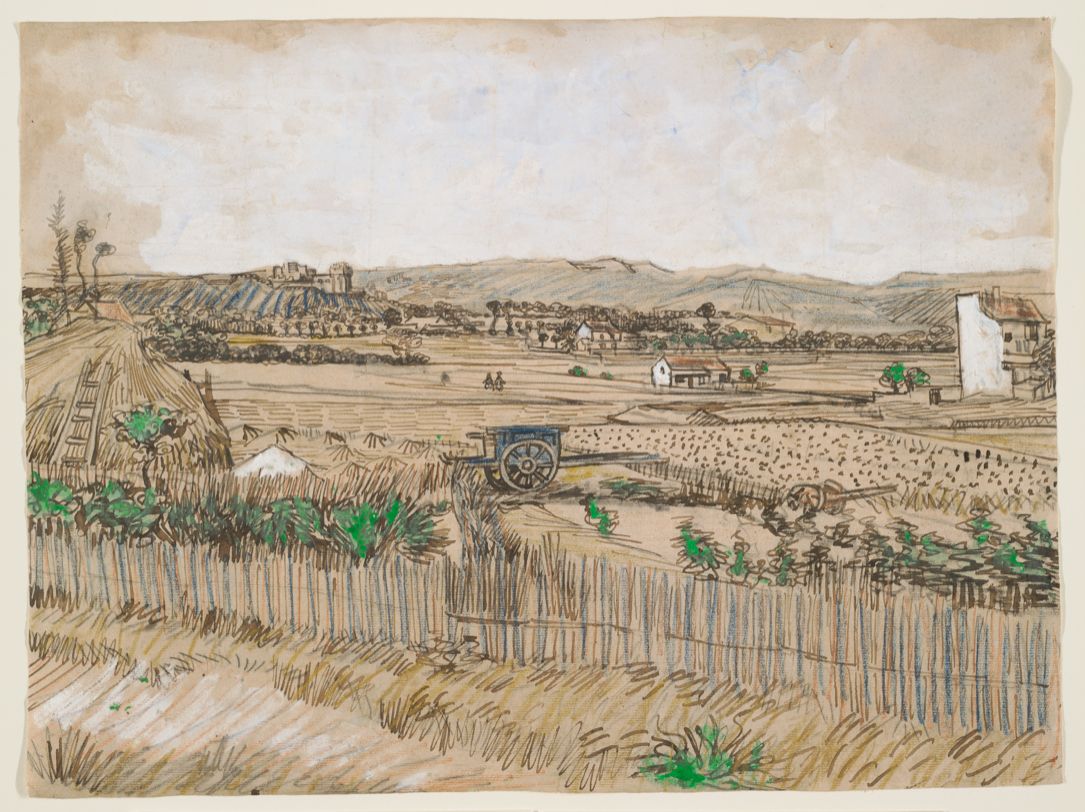 Van Gogh began the project with a watercolour study, which he sent to his sister Wil (and is now at Harvard Art Museums). It is interesting to note the changes introduced in the oil painting. The roof of another farmhouse half hidden behind the wheatstack on the left in the watercolour has been eliminated, presumably to avoid a distracting element. In the oil painting Van Gogh has taken a higher viewpoint overlooking the scene, almost a bird’s-eye view. The horizon is also higher in the final painting.

It is possible that Van Gogh may have captured the scene from a raised platform on a windmill in the eastern outskirts of Arles, on the edge of the plain known as La Crau. This would probably have been the Moulin de Jonquet. Although most of mill has been demolished, its base still survives in Rue Mireille.

In working on The Harvest, Van Gogh was inspired by the colours of the Provençal landscape. By this time, spring had already turned into summer: “I certainly have no less love for nature that is starting to get scorched... There’s old gold, bronze, copper in everything now... and that, with the green blue of the sky heated white-hot, produces a delightful colour.”

Back in his studio, in the Yellow House, Van Gogh set out to “adjust the workmanship a little, to harmonise the brushstrokes”. That was his way of working: to do most of a landscape painting outside, facing the scene, and then to refine it back home, making minor adjustments to the colours and brushwork.

After completing The Harvest in mid-June, Vincent laid the picture on his terracotta floor tiles, enjoying the effect of it being temporarily framed in reddish brown. This would have exaggerated the effect of the turquoise sky and the central band of green plots, set against the near complementary reddish brown colour of the floor. He presumably looked down at the painting lying on the tiles when he poured himself a drink and lit his pipe.

Pleased with the result, Vincent wrote to Theo: “On days when I bring back a study [like The Harvest] I say to myself, if it was like this every day things could work—but on days when you come home empty-handed and you eat and spend money all the same, you don’t feel content with yourself, and you feel like a madman, a scoundrel or an old fool.” Van Gogh still lived in hope that in Provence he would finally make a breakthrough and begin to sell his work.

Vincent was understandably proud of The Harvest, believing it to be the finest of his recent paintings. It “absolutely kills all the rest”, he told Theo. A month later he included it in a batch of pictures he sent to his brother in Paris (but despite his hopes, The Harvest would remain unsold, staying with his family).

Theo loved The Harvest and proudly hung it above the piano in the sitting room of his apartment. After Theo’s death in 1891 it passed to his widow Jo Bonger and their son, also named Vincent Willem (as a tribute to the artist). Twenty years later, after Jo’s marriage to the painter Johan Cohen Gosschalk, the landscape still had pride of place in the lounge of their Amsterdam apartment. 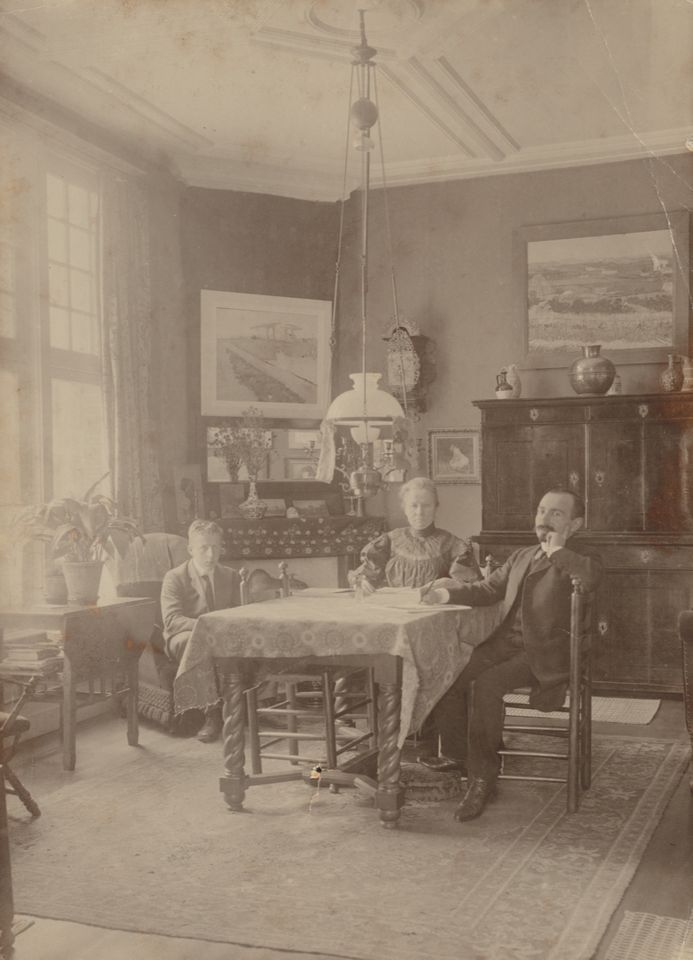 By 1949, Vincent Willem and his wife Nelly had hung the Sunflowers (August 1888) above their sofa, with The Harvest next to it. Both paintings were given modest narrow frames and casually hung on long strings. Beside them is a self-portrait (1887), perilously close to the cat on Nelly’s lap. 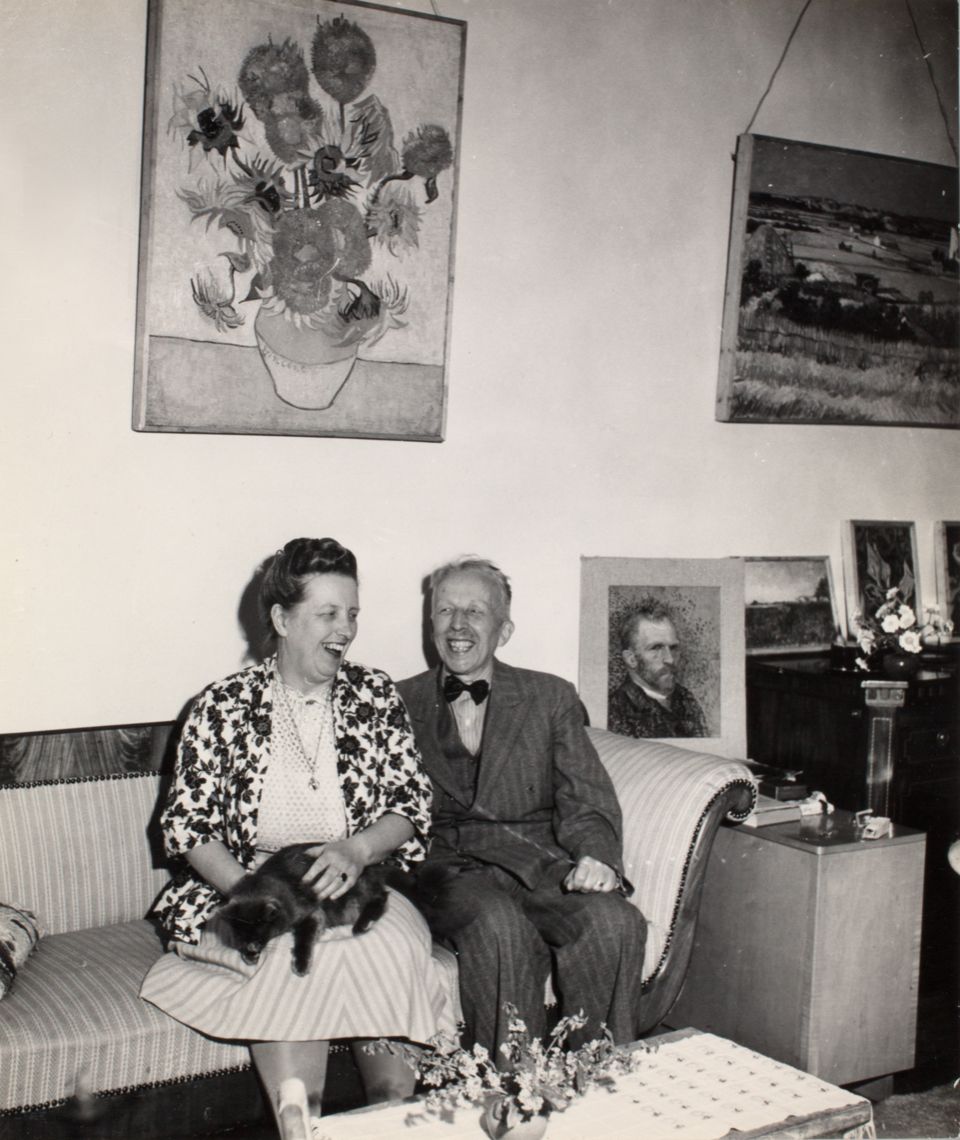 Vincent Willem and his wife Nelly at their home in Laren, 1949, photograph by Peter Pollack Courtesy of the Archives of the Art Institute of Chicago

Later that year, The Harvest left their sitting room to travel to a major Van Gogh exhibition at New York’s Metropolitan Museum of Art. There it was captured in a delightful painting by the artist and illustrator Edith Barry, showing visitors sporting the latest fashions of mid-century America.

Vincent Willem liked very plain narrow frames (as seen in the sofa photograph), but Barry has inserted The Harvest into an enormous and quite inappropriate yellow frame—presumably a misguided tribute to Van Gogh’s love of that colour. 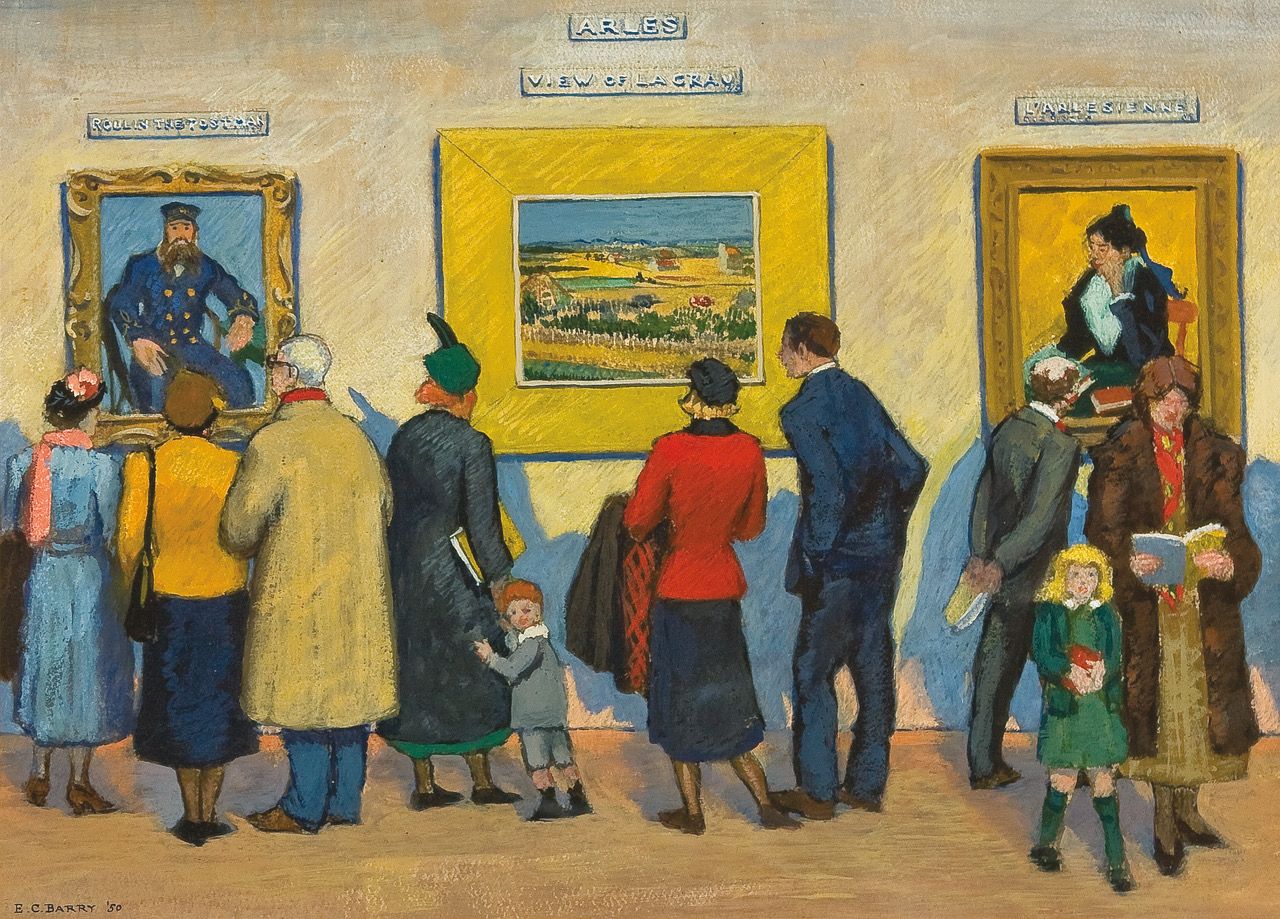 Altogether, The Harvest has been lent to no fewer than 101 exhibitions in the past 100 years. The sheer number of loans not only reflects the popularity of the work, but also suggests that Van Gogh’s paintings are often reasonably robust.

Since The Harvest joined the Van Gogh Museum’s collection in 1973 loans have slowed down and it has only left Amsterdam on seven occasions. Along with the Sunflowers it is one of works which visitors expect to find on permanent display in the museum. It is now hung in a fairly simple gold frame with no ornamentation.

Having almost finished The Harvest in a day, Vincent was worried that he might be criticised for the speed at which he worked. He told Theo: “When people say they’re done too quickly you’ll be able to reply that they looked at them too quickly.”