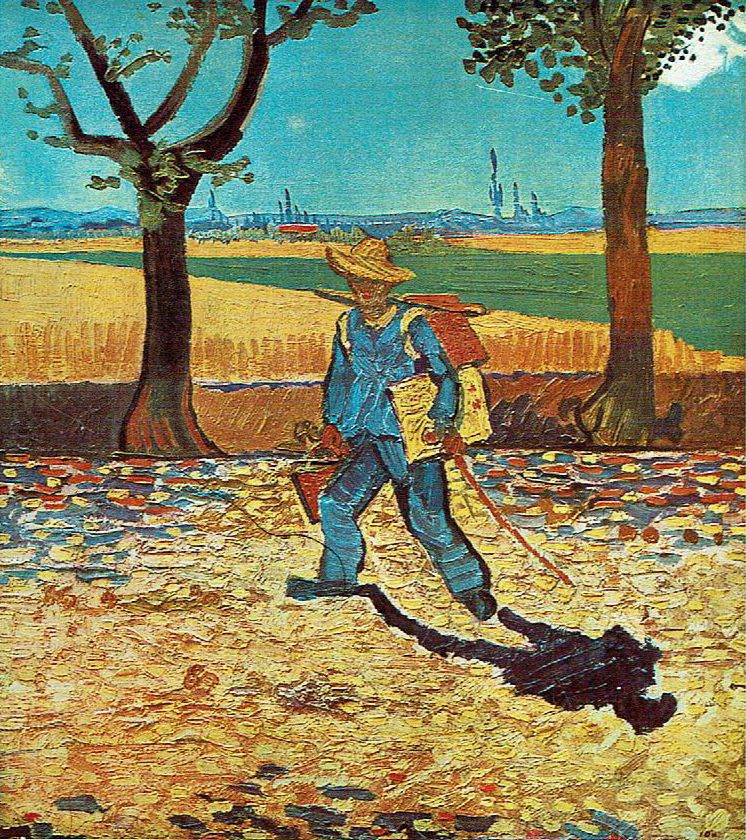 Vincent van Gogh’s The Artist on the Road to Tarascon (August 1888) Courtesy of the Kulturhistorisches Museum Magdeburg (inventory GK 558, St 29)

A few weeks ago we told the story of the Van Gogh self-portrait that was hidden in a salt mine in central Germany to protect it from bombing raids during the Second World War. In 1945, the Magdeburg museum’s painting of The Artist on the Road to Tarascon (1888) is believed to have been destroyed by a fire nearly a kilometre underground—although it is possible that it was looted and could still survive. Fortunately, it was one of the relatively few Van Gogh paintings that were photographed in colour before the war.

But there is another part of the saga that has not yet been told. When I visited Magdeburg’s Kulturhistorisches Museum a few years ago I discovered in their archive an unpublished glass negative dating from the 1920s, revealing that their Van Gogh had once hung in an extremely bold frame. The photographer was concentrating on the painting, so only part of the frame was visible. 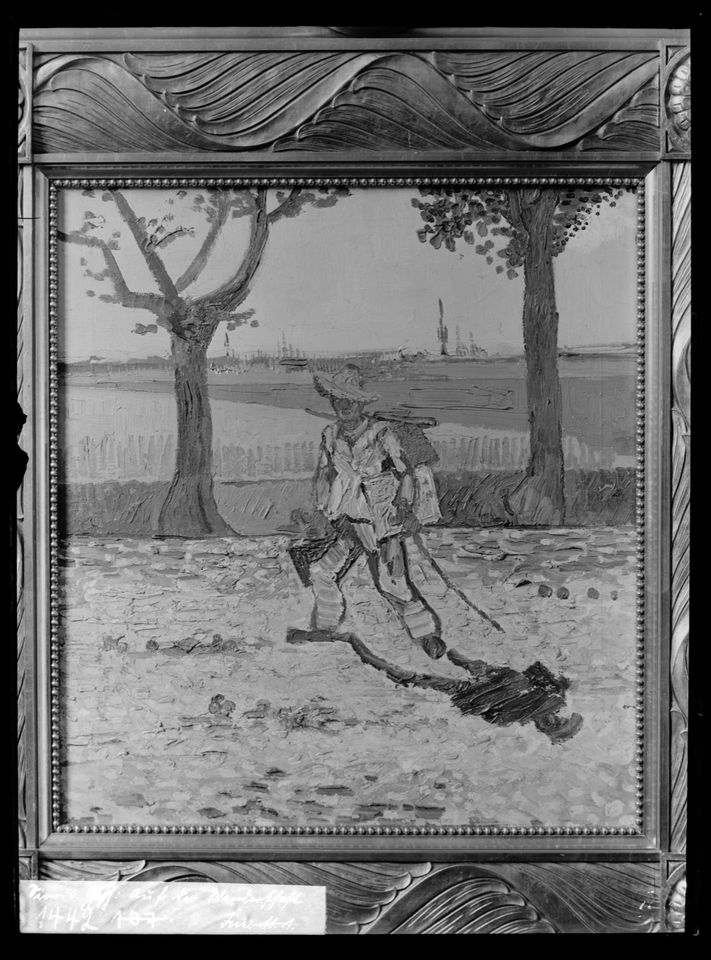 Vincent van Gogh’s The Artist on the Road to Tarascon (1888) in its original museum frame, glass negative of the 1920s Courtesy of the Kulturhistorisches Museum Magdeburg

This early black-and-white photograph has now been studied by the UK-based frame historian Lynn Roberts, who writes a blog on frames. She is convinced that the Van Gogh frame would have been gilded: “On the top there are what appear to be minute scratches on the gold, whereas you would be able to see the grain of the wood if it were ungilded. The brightness of the beading shows that it is gilded, as does the relatively high contrast over the frame as a whole.”

Roberts has now made a reconstruction for The Art Newspaper to show how the framed painting might have been presented in the early 20th century. 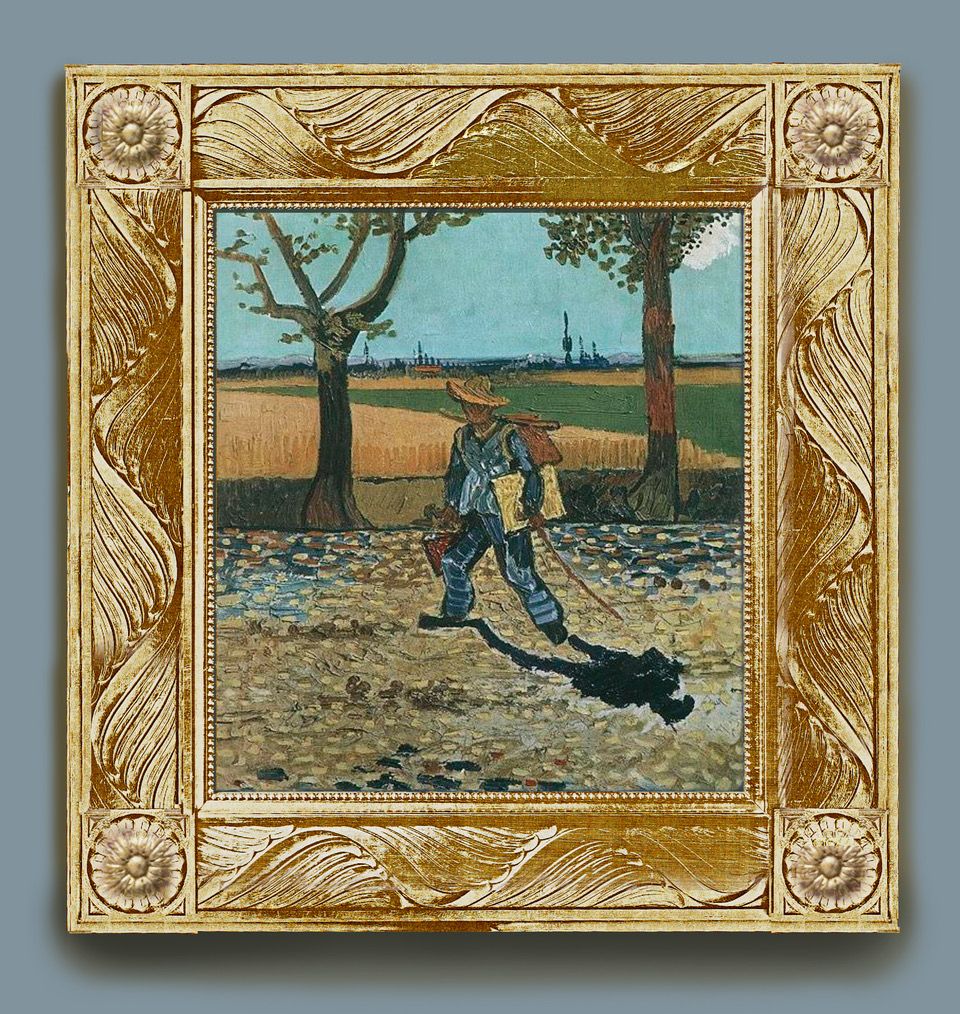 Lynn Roberts’ reconstruction of the museum frame and the Van Gogh painting of The Artist on the Road to Tarascon © Lynn Roberts, The Frame Blog

It seems that the frame may well have been specifically designed specifically for The Artist on the Road to Tarascon. The decorative corners could well represent stylised sunflowers. The swirling lines are reminiscent of Van Gogh’s windswept wheatfields or his often turbulent skies.

In 1912, the painting had been displayed in the avant-garde Sonderbund exhibition in Cologne in a more conventional frame (although difficult to see in the photograph, a close examination shows that the frame was mitred, not with decorative squares in the corners). 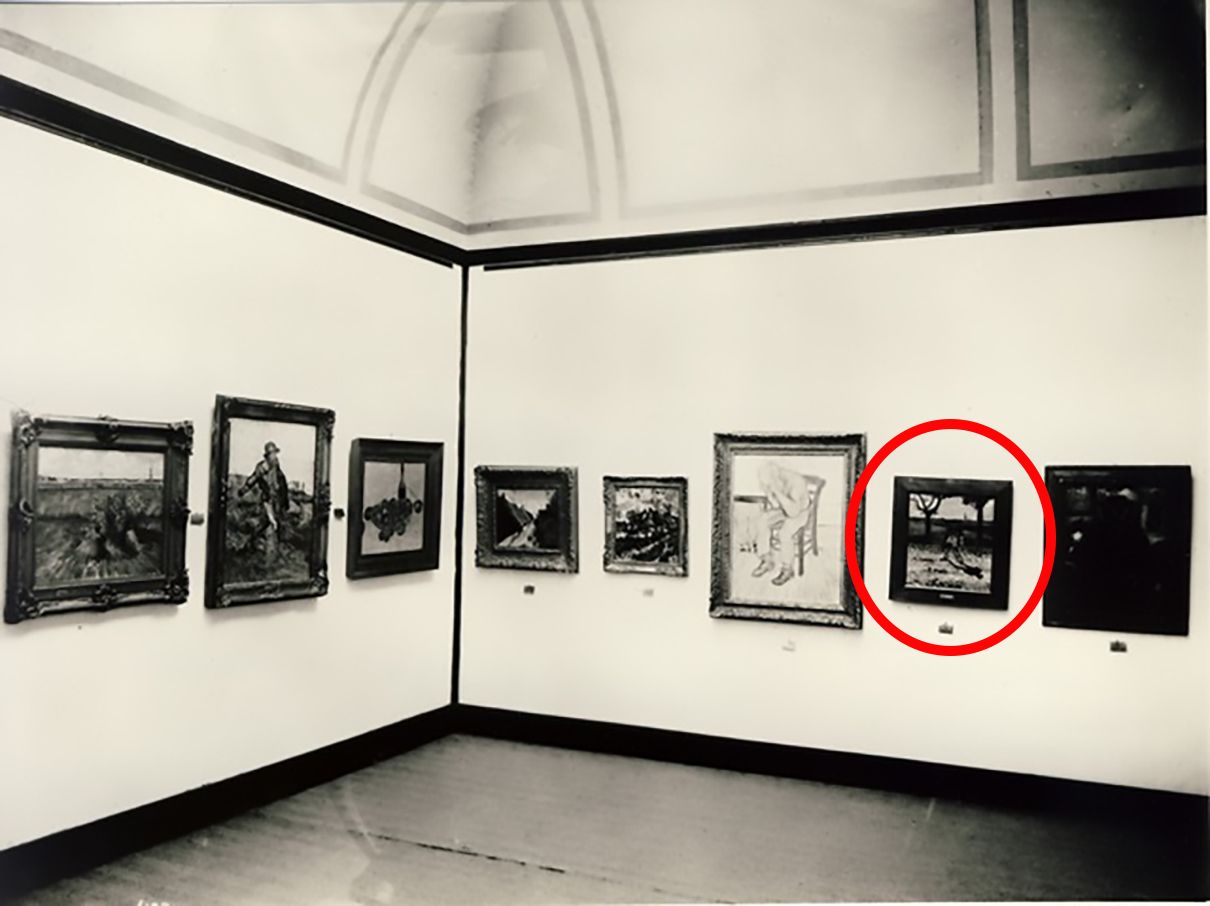 The 1912 Sonderbund exhibition, Cologne, with Van Gogh's The Artist on the Road to Tarascon circled © Rheinisches Bildarchiv Köln, rba_32416 (with thanks to Wallraf-Richartz-Museum & Fondation Corboud, Cologne)

The interesting aesthetic question is whether the new dramatically wavy frame unduly deflects attention from the painting? From a 21st-century perspective, virtually no museum curator would contemplate hanging a masterpiece in such a way.

Yet somehow it adds even more of a sense of movement to the artist’s composition—and the presentation emphasises how Van Gogh was regarded in the 1910s as a truly revolutionary artist. He was honoured as a respected artist by being in a gilded frame, but one in a very modern idiom.

The Artist on the Road to Tarascon had been bought by the Magdeburg museum in 1912, a few weeks after the Cologne exhibition, and the frame was almost certainly created very shortly afterwards.

After Hitler came to power in 1933 much “modern” art was condemned as “degenerate”, including works by Van Gogh, and this led to the notorious Entartete Kunst exhibition in Munich four years later. By this time Magdeburg’s painting had almost certainly been banished to the storeroom, in a successful effort to prevent it being confiscated by the Nazi regime.

In 1943, the Van Gogh painting, along with 400 other Magdeburg paintings, was evacuated to a salt mine in nearby Stassfurt, to protect it from British bombs. Two years later, in the chaotic conditions at the end of the war, a fire broke out deep in the mine. It was feared that all the artworks were destroyed, although it is just possible that some were looted.

And what happened to the Van Gogh frame? Tobias von Elsner, a former curator at the Magdeburg museum, believes that for ease of transport and storage the frames would have been removed from the paintings just before they were evacuated to the salt mine. After the war the frames were kept in an attic store. Then in 1960—when Magdeburg was part of the communist German Democratic Republic—the museum director ordered them to be destroyed.

Von Elsner says that staff got rid of hundreds of historic frames from paintings lost during the war: "They were thrown out of a window onto the street, where they smashed and were removed as rubbish."

All we now have is the glass negative of the framed painting and colour reproductions of the lost picture. The Otsuka Museum of Art, a Japanese venue that displays ceramic copies of western paintings, recently added a framed replica of the Van Gogh to its collection. It also generously provided another copy for the Magdeburg. And now we have Roberts’ reconstruction, presented here for the first time.

What would Van Gogh have thought about the Magdeburg frame? One fears he might have been annoyed, because he liked very basic frames. “If the painting looks good in a simple frame, why put gilding around it?” he wrote to his sister Wil. In 1905, this point was made even more strongly by Paul Gachet, the son of the doctor who treated Van Gogh after he shot himself: "It is an act of moral barbarism to put gold frames around Vincent’s canvases, that simple, humble man."