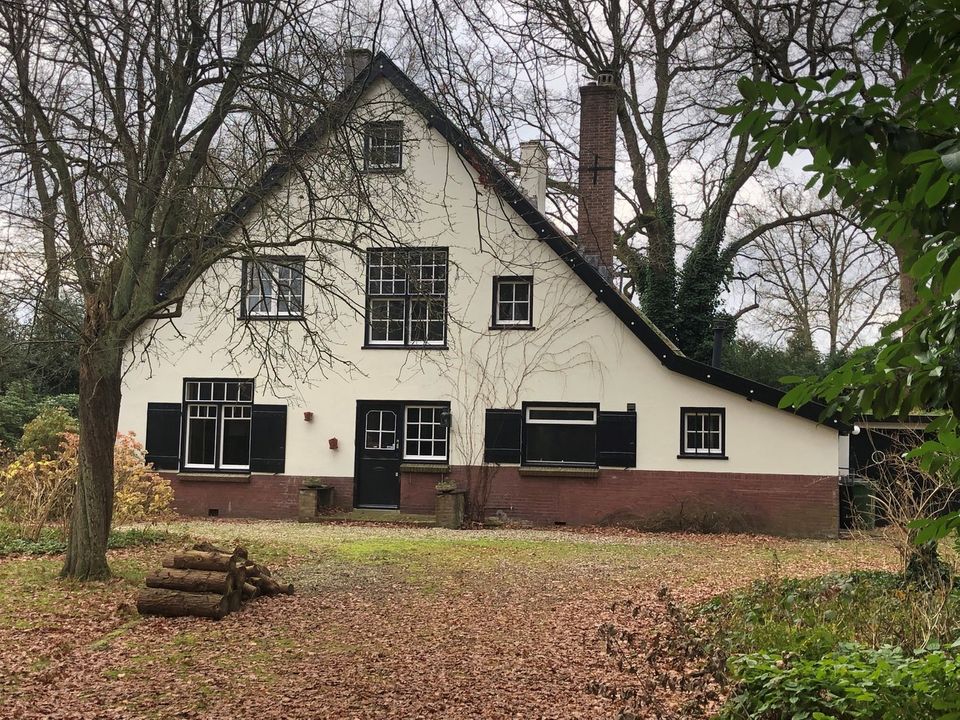 The idyllic house where Vincent van Gogh’s posthumous career was given a major boost has been threatened with demolition. Villa Eikenhof was built in 1901 for Jo Bonger, the widow of Vincent’s brother Theo. It is set in a wooded garden on the outskirts of the town of Bussum, 20 kilometres south-east of Amsterdam. Among the paintings which were once kept there were Sunflowers, Van Gogh’s Bedroom and around 20 self-portraits.

Josien van Gogh told The Art Newspaper that the family believes it is of “the utmost importance” to preserve Eikenhof. In the early 1900s Jo used the villa as a base to encourage international interest in the work of the artist. It also became “a meeting place for poets, painters and writers—a cultural hotspot”.

Theo had died in 1891, just six months after Vincent. Jo, as a young widow, then moved from Paris back to the Netherlands in an effort to start a new life. She went to Bussum, where she established a small guest house to earn a living for herself and her infant son. 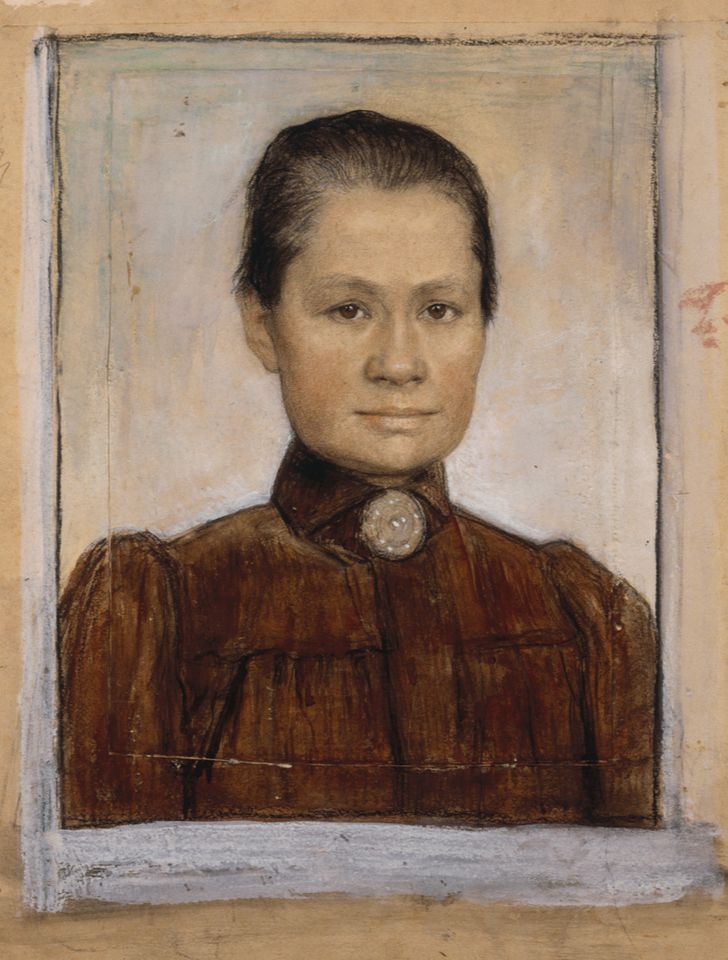 A decade later Jo remarried, to Johan Cohen Gosschalk, an artist and critic. The newly weds set up home together, building a house in a wooded area just outside the centre of Bussum, at 39 Regentesselaan.

On 9 April 1901 the foundation stone was laid by the 11-year-old son of Jo and Theo, Vincent Willem van Gogh—who had been named after the artist. Jo married Cohen Gosschalk a few months later, on 21 August, and they called their new home Villa Eikenhof (Oak Garden). 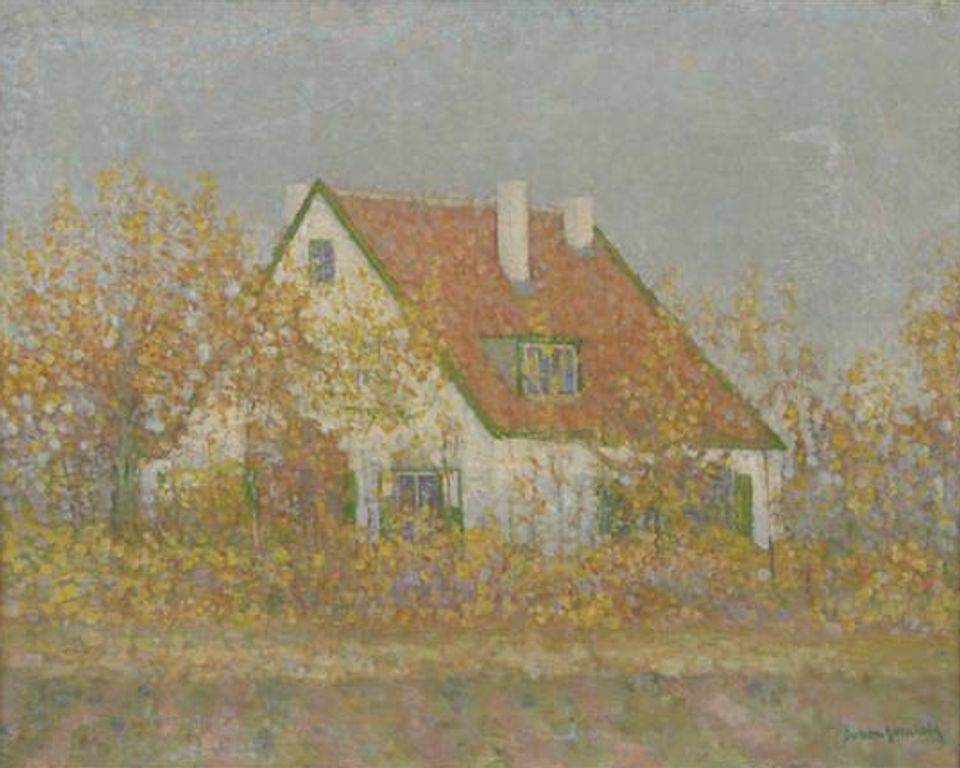 The architect was Wilhelm Cornelis Bauer, a progressive and imaginative designer. Eikenhof, set among the trees, is distinguished by its steep gabled roof.

Around 300 paintings and 500 drawings by Van Gogh were kept in the house, along with works by his contemporaries. Although some were hung, most were kept in a storage room on the ground floor and in the attic. It was from the Villa Eikenhof that Jo began to organise the 1905 Van Gogh retrospective exhibition at Amsterdam’s Stedelijk Museum, which remains the largest show on the artist ever held.

Hans Luijten, the author of last year's definitive biography of Jo Bonger (due out next year in English), regards Villa Eikenhof as a key part of the “Van Gogh history”. From its rooms Bonger and Cohen Gosschalk “promoted the reputation of Van Gogh’s work and welcomed people from the Netherlands and abroad who came to see their collection”.

The villa area of Bussum, built in around 1900, was a hotbed of creativity—and home to the painter Jan Veth, the sculptor Lambertus Zij and the psychiatrist and writer Frederik van Eeden. It was Van Eeden who established the socialist commune he named Walden, after the 1854 book Walden: Or Life in the Woods by the American writer Henry Thoreau. Inspired by Thoreau’s rustic ideals, Van Eeden built his own house, designed by Bauer, which also served as a rest home for psychiatric patients.

Jo, Johan Cohen Gosschalk and the young Vincent only enjoyed Villa Eikenhof for a few years, since they moved to Amsterdam in 1904. They went there to keep an eye on Jo's widowed mother and for the city's cultural attractions. Cohen Gosschalk died in 1912.

Following their departure from Bussum, Villa Eikenhof was rented out by the Van Gogh family until 1978, when it was sold after the death of the engineer Vincent Willem (who as a boy had laid the foundation stone). In recent times the house was owned by an elderly woman and after her death it was resold last year for €1.6m. It is believed that the current owner would like to demolish the villa so that several houses can be erected in the large garden. 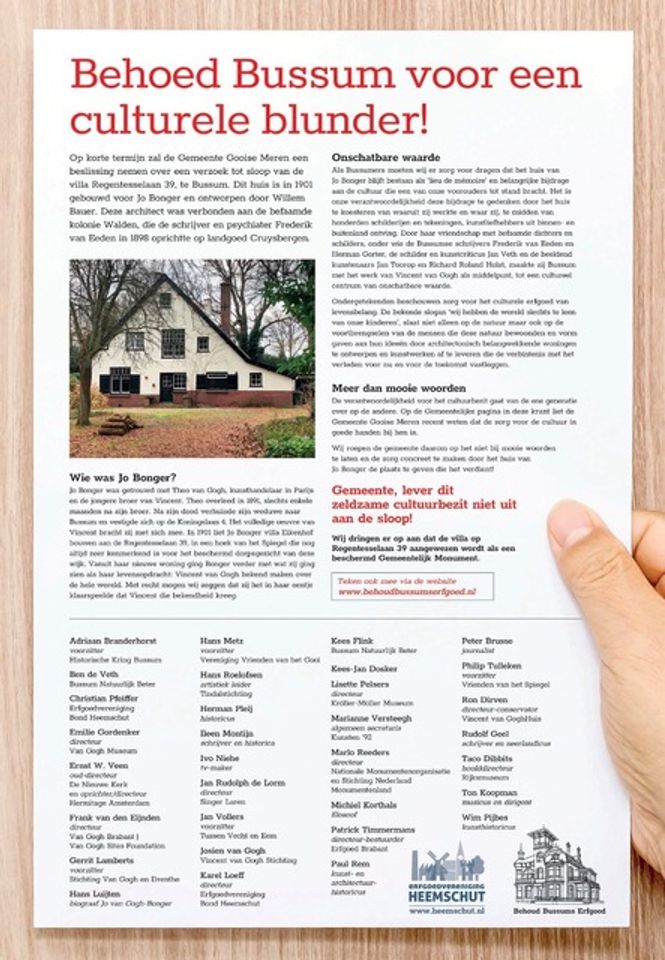 Advertisement which appeared this week protesting against Bussum’s “cultural blunder”

The campaign to preserve Eikenhof is being led by an Amsterdam-based conservation group, the Heemschut Heritage Association.

On Wednesday evening the municipal council of Gooise Meren (which includes Bussum) voted to call for Villa Eikenhof to be declared a monument. A key factor behind the decision was the protest letter against the proposed demolition with some very influential names. The municipality will now consider the matter and it will be open to the owner of the property to appeal a decision. So the threat remains; but there is now a reasonable chance that “the Van Gogh villa” can be saved.

In other van Gogh news:

• London’s National Gallery has announced today that its Sunflowers are now “out of quarantine”. The museum's touring exhibition of 60 paintings, which includes the Van Gogh, was due to have opened on 3 March, but this was blocked at the last minute because of coronavirus closures. The show will now open at Tokyo’s National Museum of Western Art on 18 June and run until 18 October. It is then rescheduled to travel to Osaka’s National Museum of Art (3 November-31 January 2021) and Canberra’s National Gallery of Australia (5 March-14 June 2021). This means that after the coronavirus delay the pictures will finally return to the walls of the London gallery next July.