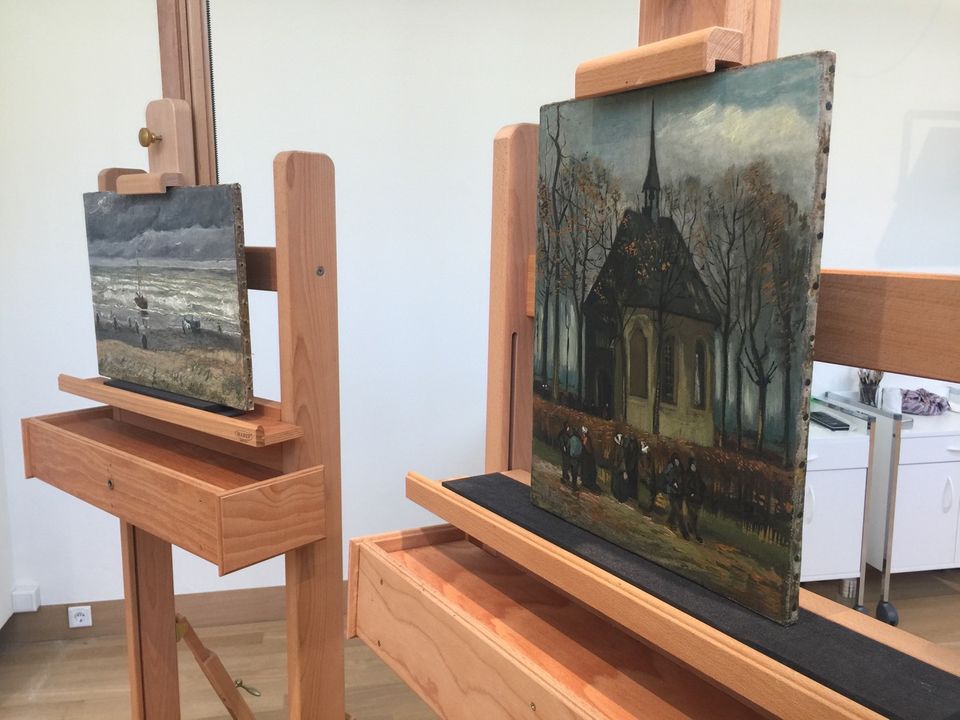 View of the Sea at Scheveningen (1882) and Congregation leaving the Reformed Church in Nuenen (1884-85) in the conservation studio, Van Gogh Museum, Amsterdam, on 16 April Photo: Martin Bailey

Two Van Gogh paintings recovered from an Italian mafia-style gang have now been conserved and went back on display at the Van Gogh Museum in Amsterdam on 17 April. View of the Sea at Scheveningen (1882) and Congregation leaving the Reformed Church in Nuenen (1884-85) had been stolen from the museum in 2002 and were recovered three years ago on the outskirts of Naples.

Immediately after the theft the two pictures were probably removed from their frames by the thieves, Octave Durham and Henk Bieslijn. It may have been then that a corner of View of the Sea at Scheveningen was damaged and a corner broken off. This oil work is particularly fragile, since Van Gogh had painted it on paper, which was remounted on canvas in around 1950. The two thieves are said to have flushed the broken fragment down a toilet and to have thrown the frames into a canal.

Following the recovery of View of the Sea at Scheveningen, the lost area in the lower-left corner (around 7cm high and 2cm wide) was reconstructed using a novel approach. Conservators took a scan of the neighbouring areas of surviving thick paint and, using pre-theft raking light images—in which a painting is illuminated from the side to reveal its surface—created a 3D-printed mould from which a replacement section was made. This was then attached to the picture, with its surface retouched to match the lost original paint. 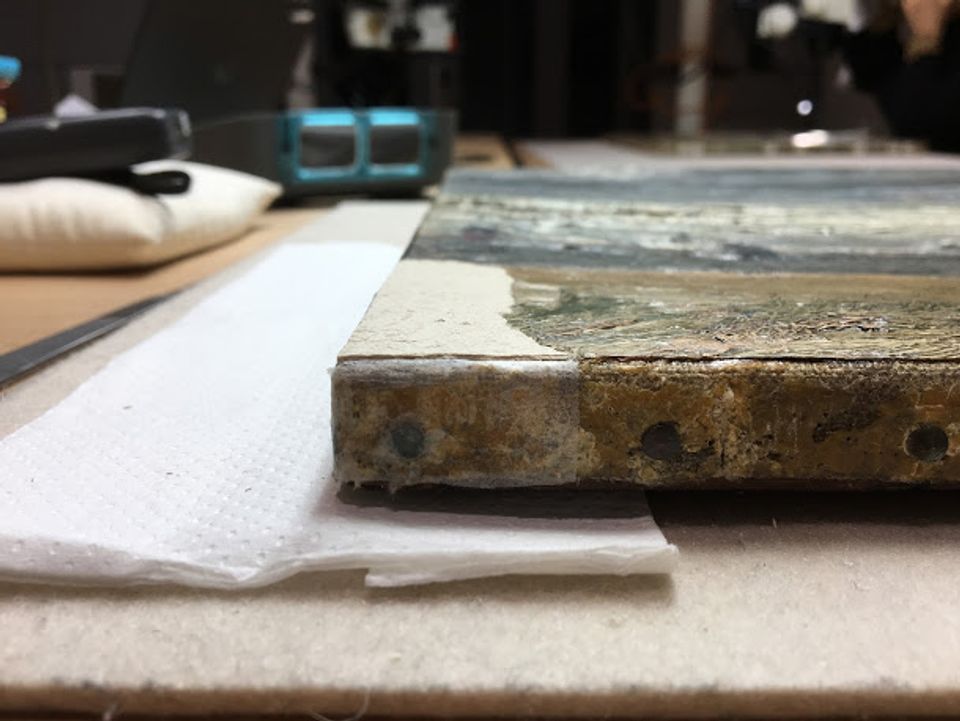 View of the Sea at Scheveningen with the cream-coloured replacement section, before retouching Photo: Saskia van Oudheusden

During the work, the conservator, Saskia van Oudheusden, noticed traces of a fake “Vincent” signature in the lower right corner. Although much of it had been removed at some point, the remnants of the “V” are still just visible. This false signature may well have been added in around 1903, when the picture was with the Rotterdam dealer Oldenzeel. 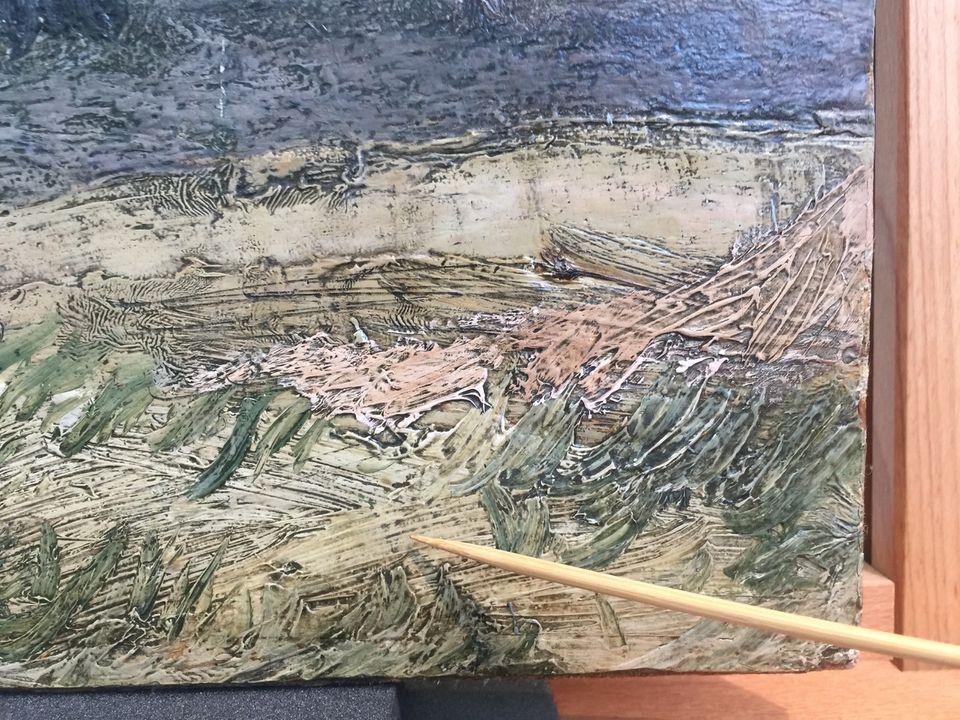 The lower right corner of View of the Sea at Scheveningen, with the “V” of the fake Vincent signature indicated Photo: Martin Bailey

Grains of sand can be seen in the paint, evidence that Van Gogh worked on the beach at Scheveningen, near The Hague. The artist wrote in a letter that there was an approaching storm: “The wind was so strong that I could barely stay on my feet and barely see through the clouds of sand.”

The Congregation leaving the Reformed Church in Nuenen, the other picture recovered in Naples, depicts the scene where Vincent’s father was the minister. Dating from January 1884, the artist painted it as a present for his mother, who had just broken a thighbone.

Some 20 months or so later Van Gogh extensively reworked the composition, giving the bare winter trees autumnal leaves and replacing the single figure of a peasant carrying a spade with members of the church congregation. It is possible that the dark figure in the middle, between the two women in white caps, could be a subtle reference to Vincent’s widowed mother Anna, who was in mourning for the recent death of her husband.

The Congregation leaving the Reformed Church in Nuenen is the only one of the Van Gogh Museum’s Dutch canvasses which survives on its original stretcher. Seeing it in the conservation studio provided an unusual opportunity to view the reverse, with its paint flecks. Kathrin Pilz, who conserved the picture, suggests that the red circles on the reverse may date from the mid-20th century, when the picture was on loan to the Stedelijk Museum, so as to indicate its importance in the event of a fire or an emergency.

The other paint flecks may well have been caused by Van Gogh cleaning off excess paint from his brushes on the reverse of the stretcher. For the first time, we are publishing a colour photograph of the back. 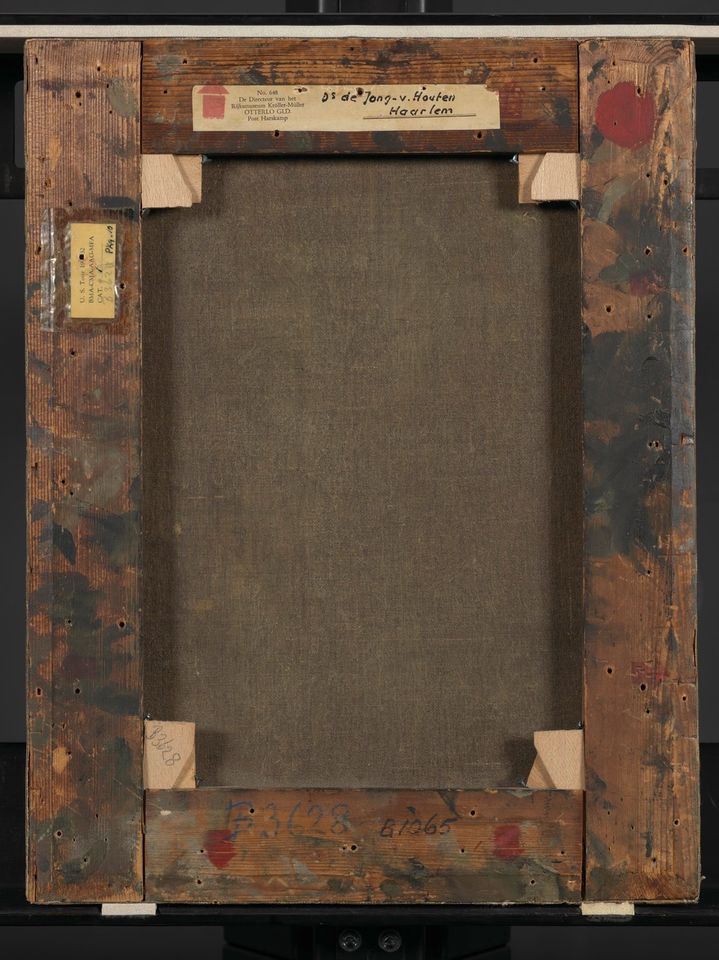 The reverse of the stretcher of The Congregation leaving the Reformed Church in Nuenen Photo: Van Gogh Museum, Amsterdam

While repairing the two recovered pictures, the conservators took the opportunity to remove darkened modern varnish. This has brought the paintings closer to their original, more sparkling colours.

The two Van Goghs survived remarkably well from their 14-year ordeal. They were wrenched from the museum’s walls; hauled through a broken window; and carried down a considerable height by the thieves who descended to the ground on a rope, landing with a jolt. The two men bundled the paintings into an escape vehicle, rushing off at speed. The pictures were then stored in conditions which would hardly have met the museum’s strict environmental controls.

Some months later the Van Goghs were transported right across Europe, to Castellammare di Stabia, a seaside resort just south of Naples - as part of a drugs deal. There they ended up in the home of the parents of the chief of the Naples Camorra gang, Raffaele Imperiale, hidden in a wall cavity next to the kitchen. Pieter van Os, a Dutch writer on art crime, describes the survival of the museum’s two paintings in reasonable condition as nothing short of “a miracle”.