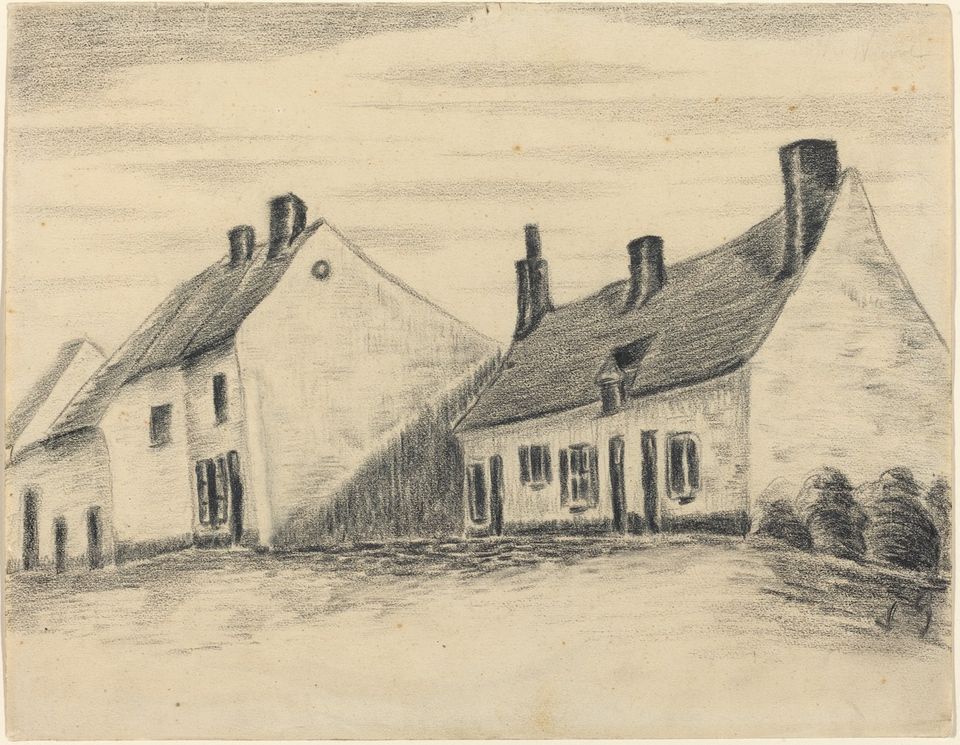 Two sketches which have been regarded as the first surviving ones done after Vincent van Gogh’s decision to become an artist are “probably” fakes, according to Yves Vasseur, the author of a forthcoming book. He believes they have been misattributed. The drawings of houses were discovered in 1958 in an attic in Cuesmes, in the Belgian Borinage, where Van Gogh served as a preacher among the miners. They were sold at auction and later donated to the National Gallery of Art in Washington, DC. 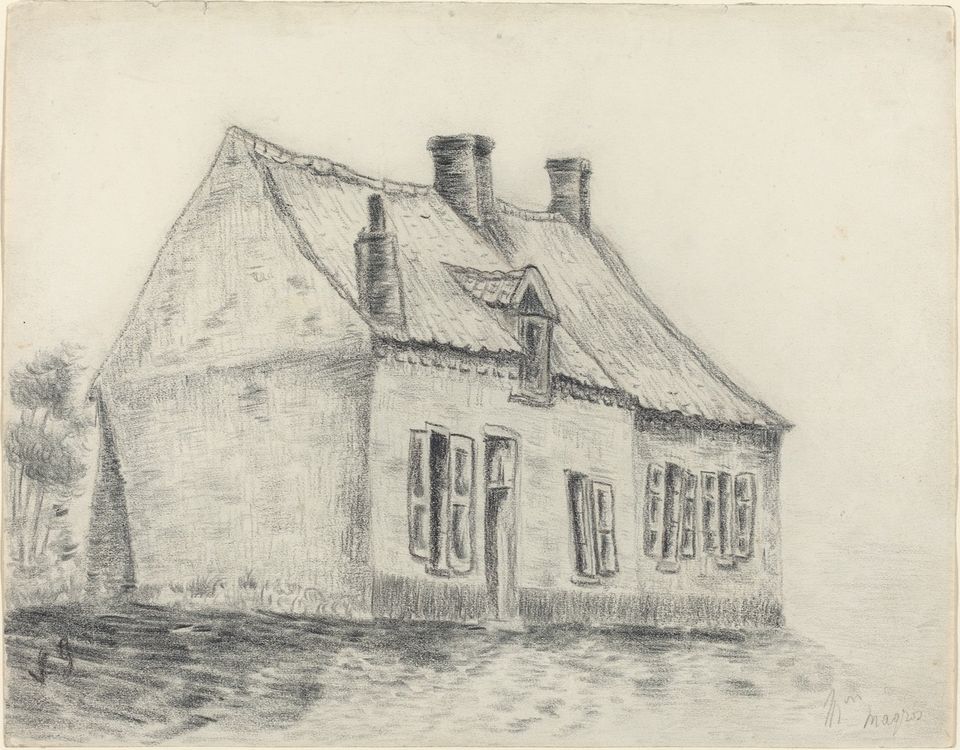 Vasseur’s book, Vincent van Gogh: Matters of Identity, is to be published by Yale University Press next January. Serving as the head of Mons Cultural Capital of Europe 2015, Vasseur was the driving force behind the city’s exhibition Van Gogh in the Borinage: the Birth of an Artist. He has a track record for Van Gogh discoveries, having recently shown that one of the two accepted photographs of Vincent actually depicts his younger brother Theo.

In the 2015 Belgian exhibition, the two drawings on loan from Washington played a key role, opening a display focussing on Van Gogh’s decision to become an artist. In September 1880, Vincent—then aged 27—had written to Theo: “I’ll pick up my pencil… I’ll get back to drawing, and from then on, it seems to me, everything has changed for me, and now I’m on my way.”

Following the Mons exhibition, Vasseur set out to investigate the drawings, which he had seen for the first time (as opposed to in reproductions). They had been discovered in 1958 in a trunk in the attic of the Cuesmes home of Samuel Delsaut (1900-78), at 17 Rue du Peuple.

Delsaut apparently described himself in 1958 as the grandson of Charles Decrucq (1822-84), who had been Van Gogh’s landlord from July to October 1880. The two drawings depict modest houses very close to that of the Decrucqs—the homes of the Zandmennik and Magros families. It was assumed that Van Gogh had given them to Decrucq, possibly in lieu of rent.

It was while living with Decrucq that Vincent made the most important decision of his life—“to pick up” his pencil. He was then living in abject poverty, sharing a little room with his landlord’s children: “It’s tiny as it is, and there are two beds, the children’s and mine.”

Delsaut’s heart “skipped a beat” when he noticed that the two drawings he discovered in the attic were both initialed “VG”. He therefore contacted Theo’s son, Vincent Willem van Gogh, who authenticated and published the drawings. Vasseur’s investigations suggest that this was after only cursory study and largely based on the Decrucq provenance. They were later published in the 1970 de la Faille catalogue raisonné of Van Gogh’s work, but it remains unclear how thoroughly they were examined and they were probably accepted on the basis of Vincent Willem’s pronouncement.

Delsaut and his son Carlo decided to sell the sketches. After this length of time it is impossible to know what examination the two major auction houses undertook. Sotheby’s decided that they were not authentic—but Christie’s proved willing to proceed. The drawings eventually sold for £4,200 each at Christie’s in 1970. 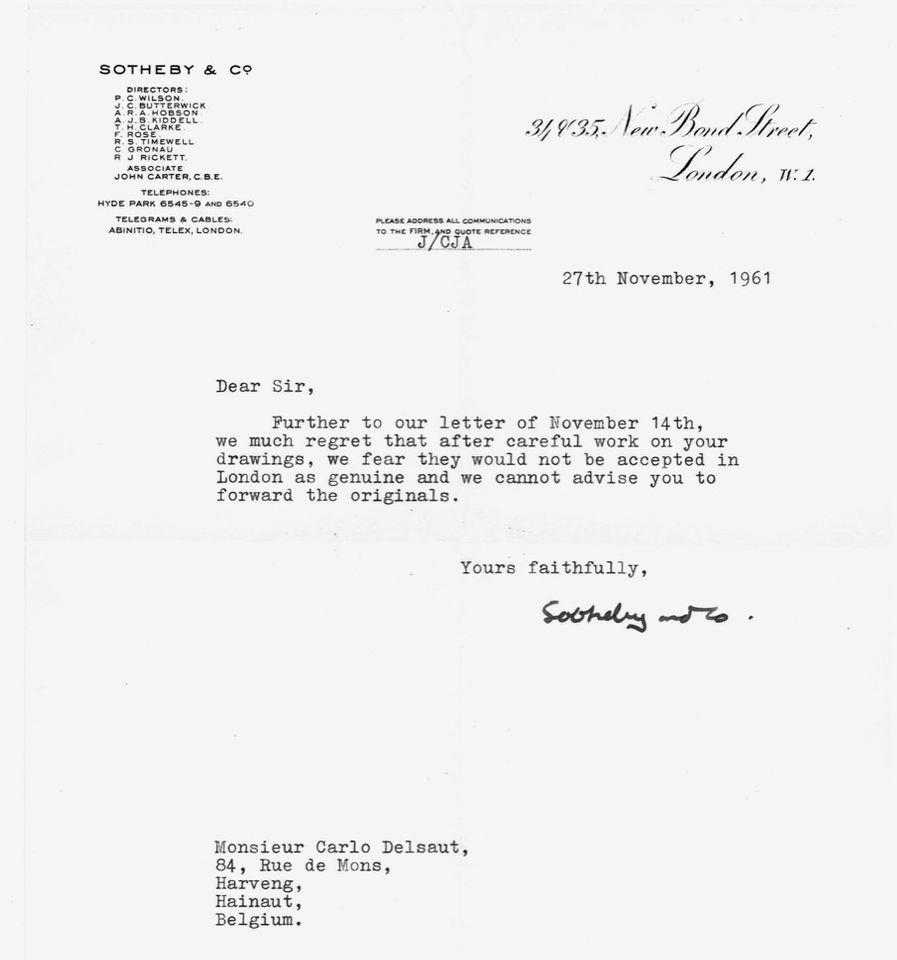 The two Cuesmes drawings were bought at Christie’s by Armand Hammer, an oil tycoon, collector and art dealer. He donated them to the National Gallery of Art around the time of his death in 1990.

Vasseur has now approached the drawings with fresh eyes. The initials “VG” come as a surprise, since when the artist later signed his work, it was always “Vincent”. Stylistically, the drawings are more accomplished than one might expect, compared with his other rare surviving Borinage sketches, such as Miners in the Snow (Kröller Müller Museum, Otterlo), dating from September 1880. Vasseur was surprised to find that Delsaut apparently claimed in 1958 that he was the grandson of Van Gogh’s landlord, whereas he was actually a great nephew.

The pair of drawings, discovered in the attic, had been in a folder marked with the name of Samuel Delsaut’s uncle Elie Delsaut (1869-1949), who was an amateur artist. Vasseur believes that he is most likely the creator of the Washington drawings. 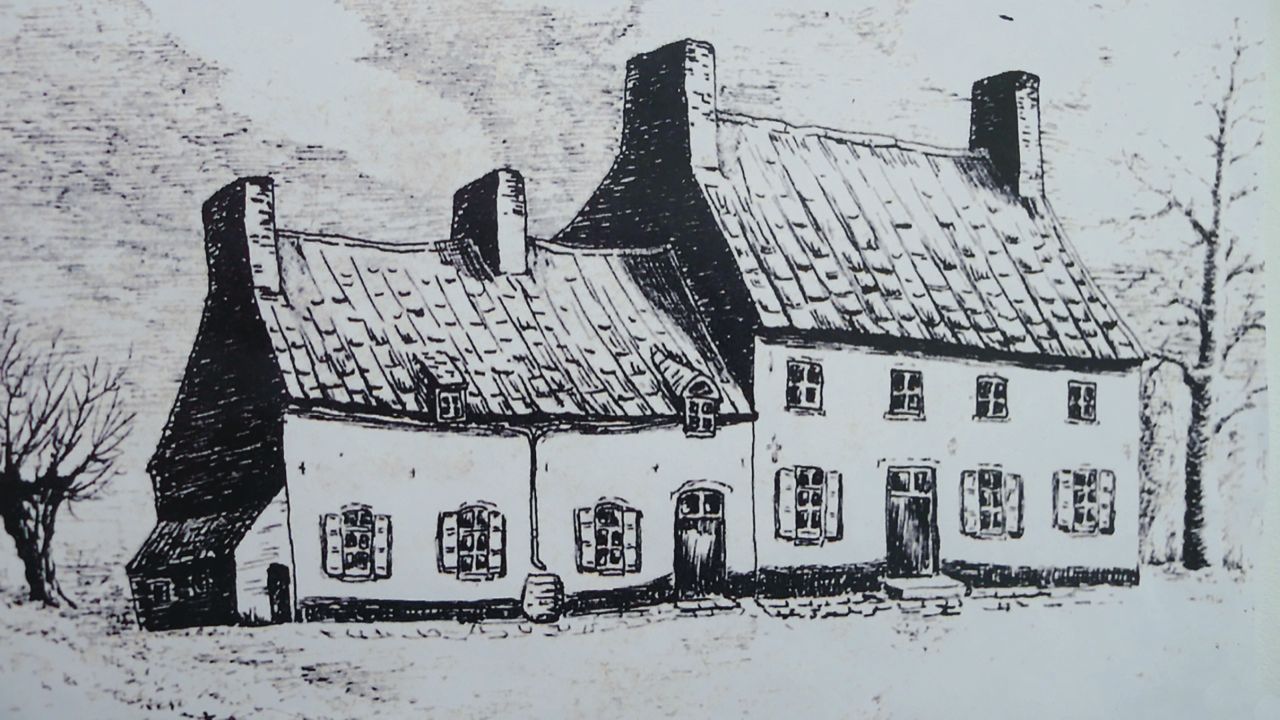 A photograph of a lost drawing of the Decrucq house thought to be by Elie survives. It is certainly similar in style to the two attributed to Van Gogh.

The Zandmennik and Magros houses in the Washington drawings have long been demolished, but the taller part of the Decrucq house in Elie’s sketch survives. Now known as the Maison Van Gogh, it serves as a museum and visitor centre. 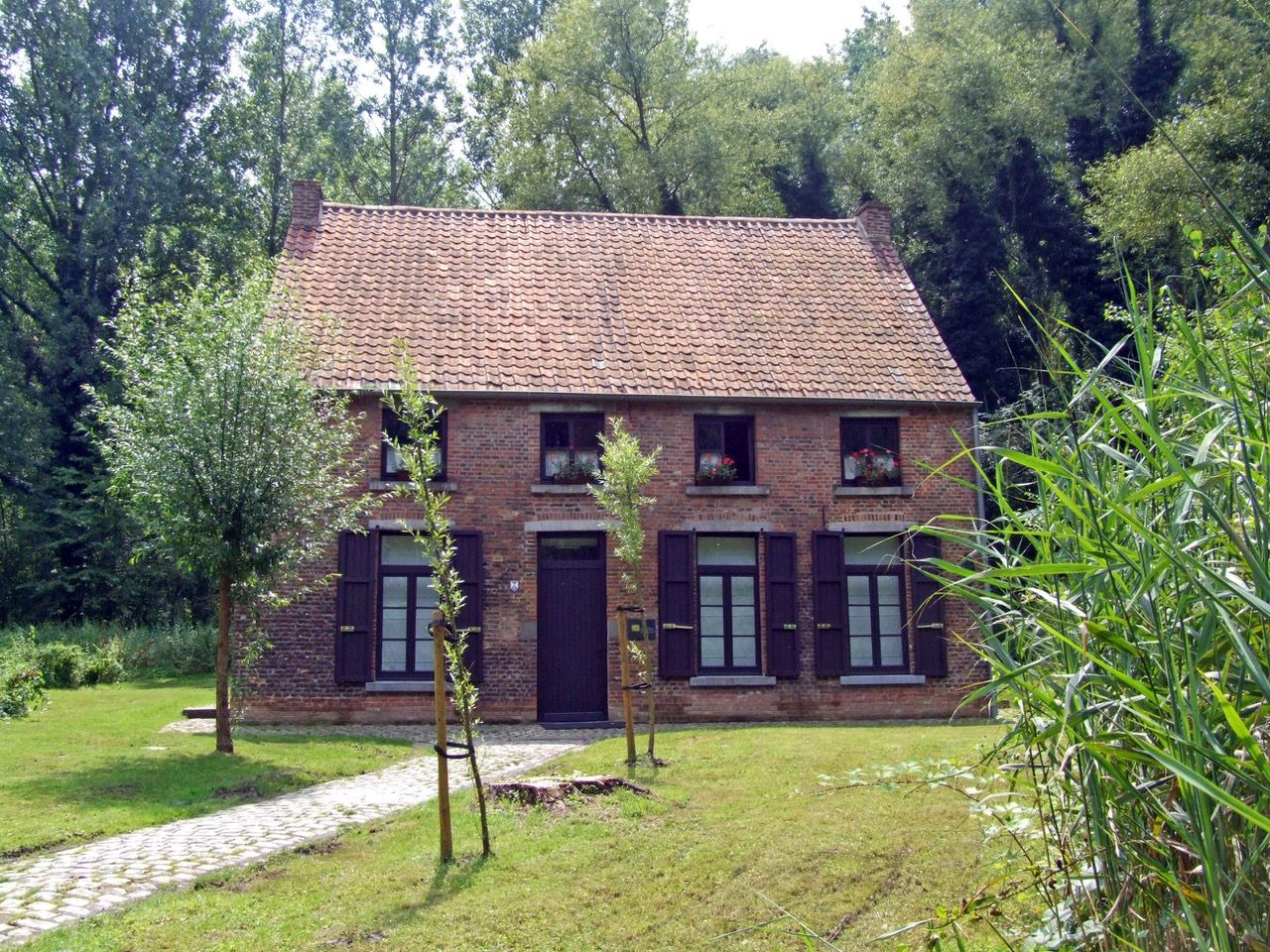 The Van Gogh Museum in Amsterdam is regarded as the key authenticator of the artist’s works, but it does not normally comment on items in other collections. However, Marije Vellekoop, its head of collections and research, has written an enthusiastic foreword to Vasseur’s book, saying that “I fully endorse” his approach, which is “not taking passed-down ‘facts’ for granted”.

Sjraar van Heugten, a former head of collections at the Van Gogh Museum and curator of the 2015 Mons exhibition, has an open mind on the Washington drawings. But in the introduction to Vasseur’s book he says the author’s discoveries “bring up serious questions and establish grounds for doubts surrounding their authenticity”.

A spokeswoman for the National Gallery of Art was unable to make a substantive comment. With the coronavirus problems, its curators and conservators need to wait until they can “do their own research and gather together to study the drawings”.

The case of the Washington drawings demonstrates the importance of weeding out misattributions. Art historians have long regarded the two Cuesmes sketches as evidence of a certain talent in Van Gogh’s work by 1880. But if they are not by Van Gogh, then his other crude Borinage drawings suggest that his development as an artist was rather different.

Remarkably, just under a decade after his hesitant Borinage sketches, Van Gogh would be using colour to produce his expressive canvasses. The artist that today we admire and love achieved success even more quickly than we had thought.

Vasseur’s book is published in French and Flemish by Mercatorfonds next week and in English by Yale University Press on 26 January 2021. 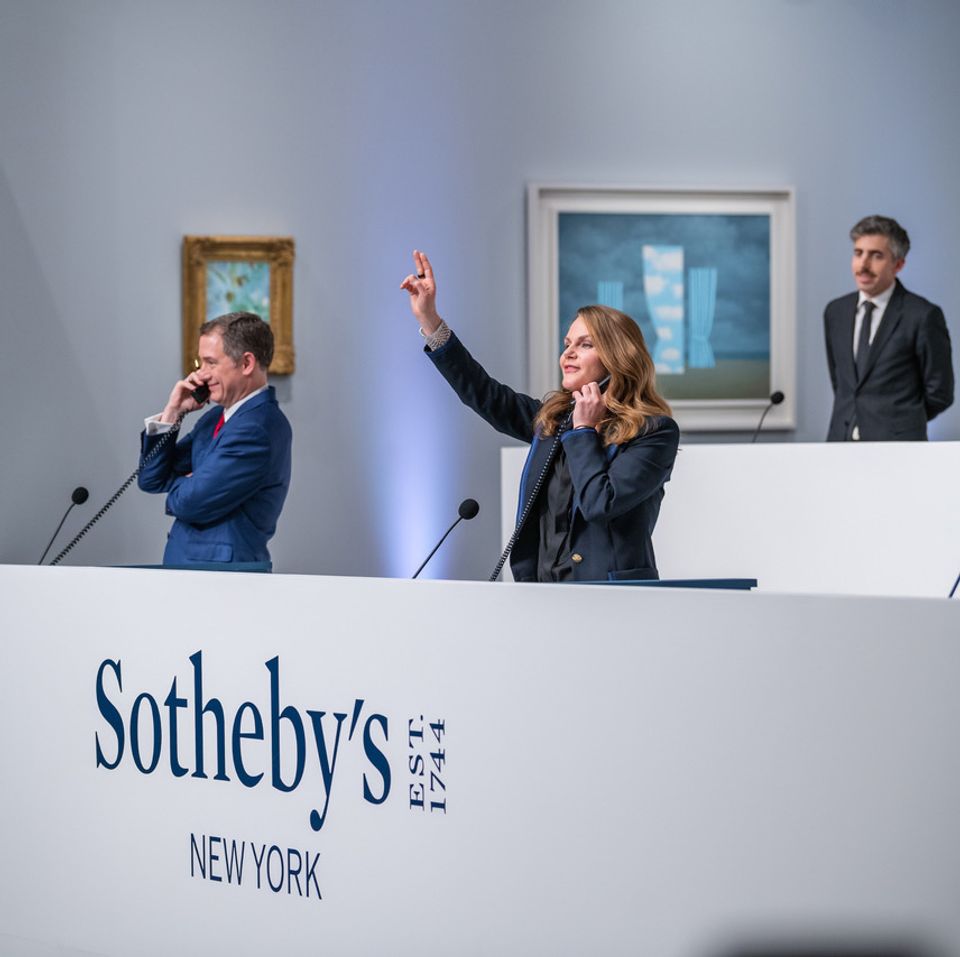